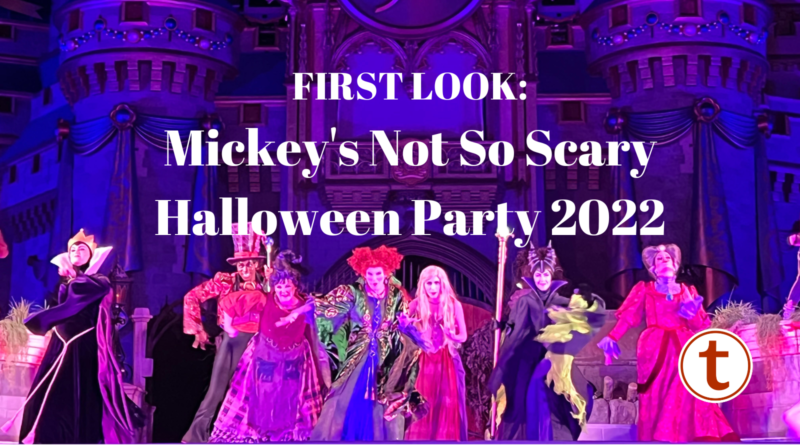 Halloween has arrived in Disney World, and we were at the first night of the return of Mickey’s Not So Scary Halloween Party. 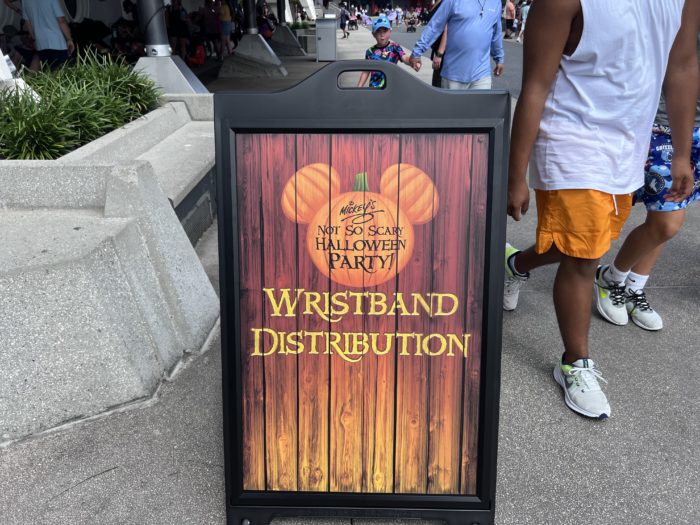 When you enter the park, a Cast Member will confirm that you have a party ticket, and from there you will be given a wristband that signifies that you have a ticket to Mickey’s Not So Scary Halloween Party. If you were previously in the park on a day ticket, like our park correspondent, Chrissy, there are marked locations around the park that open at 4 PM in order for you to get your wristband. Chrissy picked up her wristband at the entrance to Tomorrowland.

In addition to wristbands, Cast Members are there handing out party-exclusive park maps. This will be your guide to character greetings, trick-or-treat locations, specialty food and beverage, and merchandise. 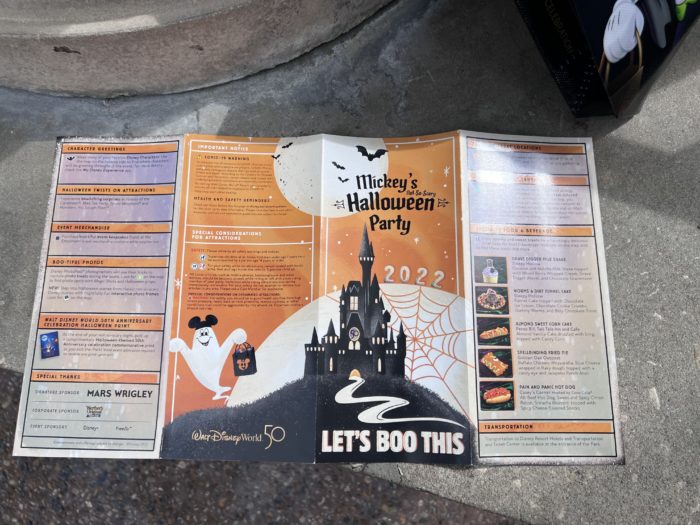 You can find PhotoPass locations with Magic Shots and Halloween Props, as well as interactive photo frames on the park map. 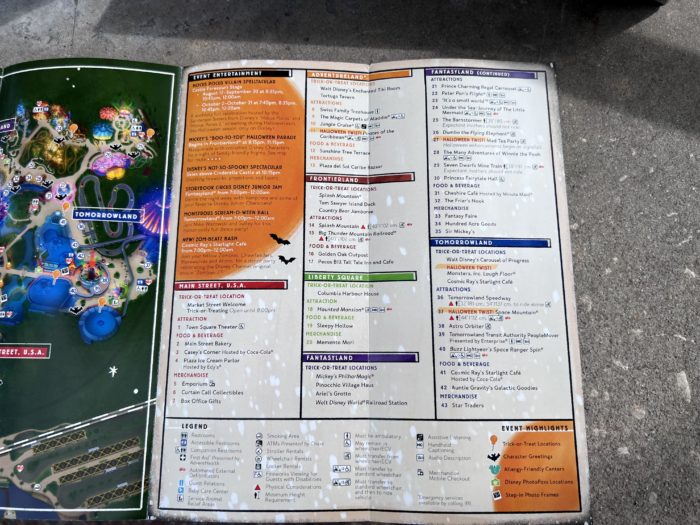 During the party, there are 15 different character meet and greets locations throughout the park. We did notice that the character locations on the maps did not match the locations shown on the My Disney Experience App, so that is something to note. 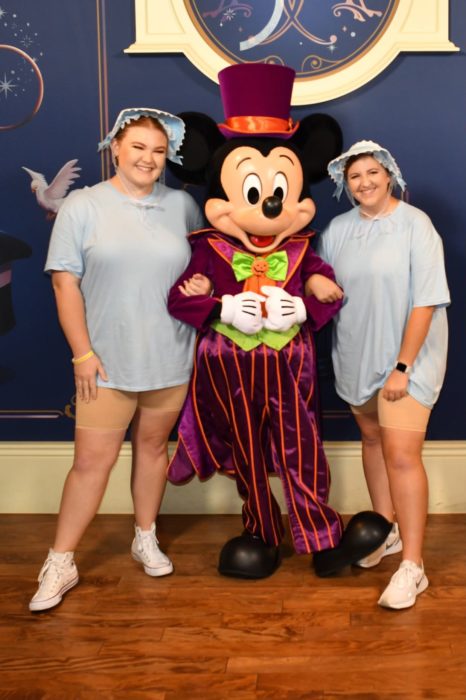 On the first night meet and greet lines were long, we were told that when the party started at 7 PM the wait for Jack and Sully at Town Square was already at 3 hours, however, the wait for Mickey at the same time was just 15 minutes. So be sure to prioritize what characters you are looking to see. 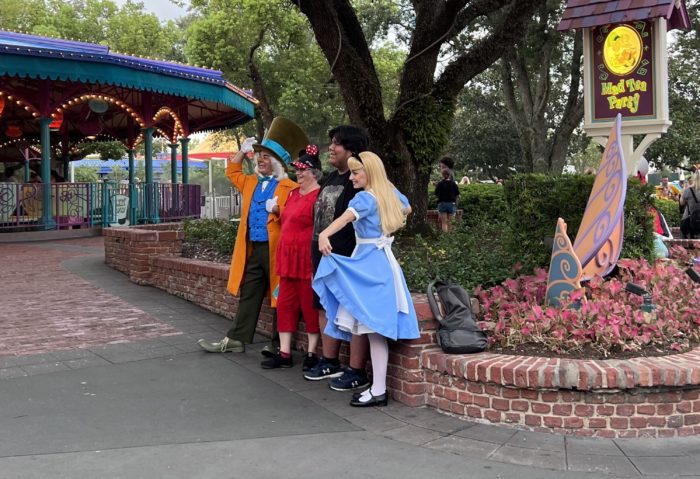 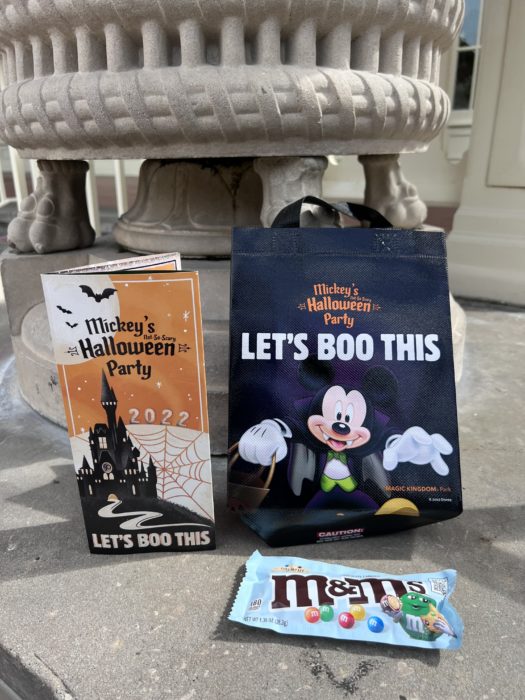 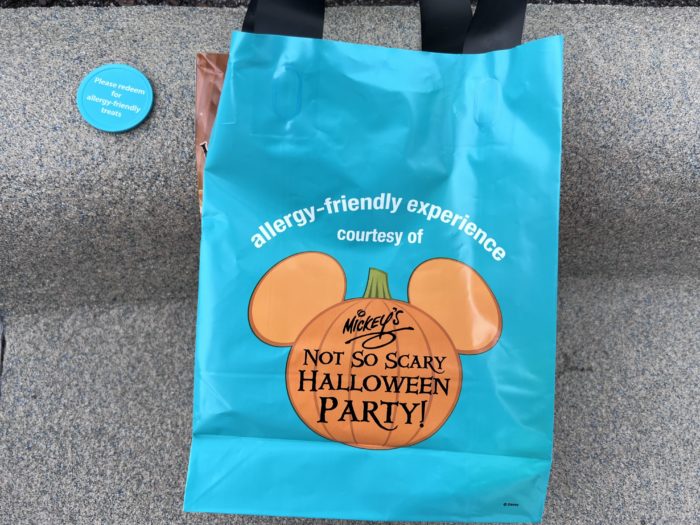 It is easy to spot the trick-or-treat spots around the park, look for the giant illuminated pylon and follow it to the candy. There is no age limit for trick-or-treating, and you can go as many times as you want.

Staring in Frontierland and continuing all the way down Main Street, the “Boo-to-You” parade returns to the Halloween Party. You can catch this one twice a night during the party at both 9:15 PM and 11:15 PM. 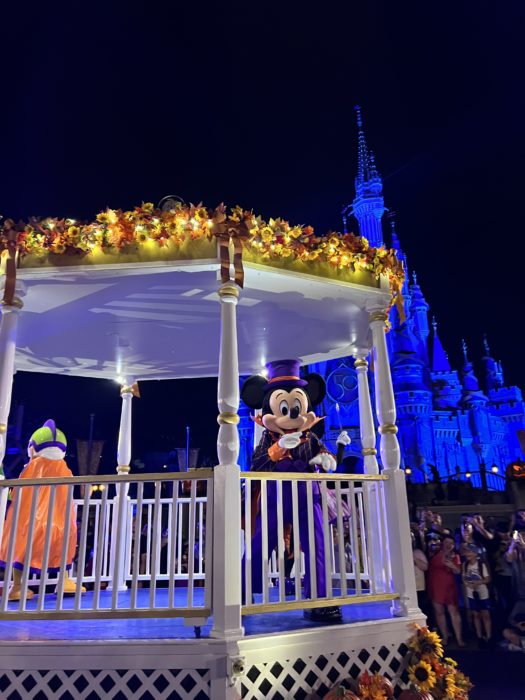 Unfortunately for us, rain canceled the first parade. However, the second parade ended up running with a slight adjustment in its schedule. Disney made only one announcement that the parade would be starting 10 minutes early due to the weather. So, be aware that weather can move entertainment times throughout the night, and you need to listen for announcements as the changes will not be reflected in the My Disney Experience App. 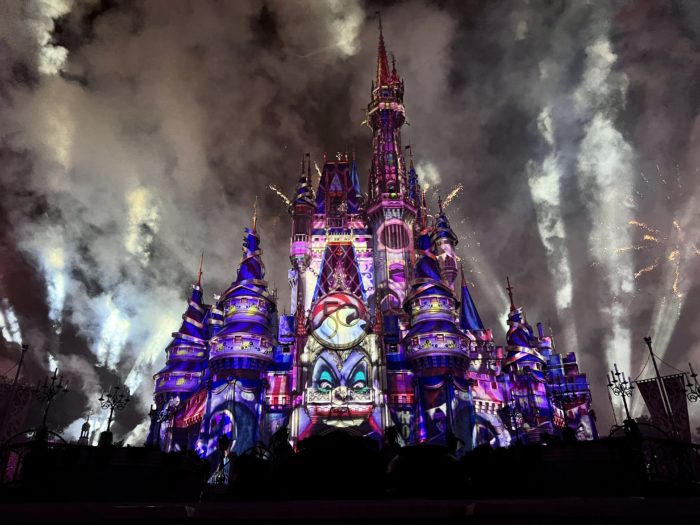 Fireworks also return to this year’s Halloween event, with the firework, projection, and laser show that lights up the sky over Cinderella Castle starting at 10:15 PM.

However during our party, the rain decided to strike again, and fireworks were delayed but still went off. Of course, we were upfront for a great view of Jack Skellington, and you can find a video of it over on our Tiktok. The show runs 12 minutes long and is on the schedule for every night of the party.

The Hocus Pocus stage show returns to Mickey’s Not So Scary Halloween Party. It has three shows a night through the end of September and expands to four shows a night for all of October. The stage show is hosted by the Sanderson Sisters, and takes place on the stage right in front of Cinderella Castle. 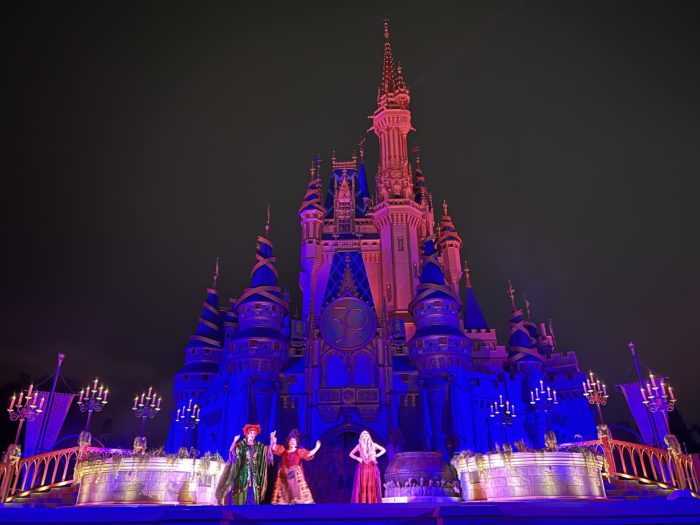 We went early to grab a spot in order to catch the first stage show, but unfortunately the rain started and we decided to skip the first one since there are two other shows that night. Because of the rain, the first show was in fact canceled, as was the second show. The third show which was scheduled for midnight ended up being slightly delayed at first, eventually happened about 10 minutes late, and we believe it was an abbreviated version of the show. 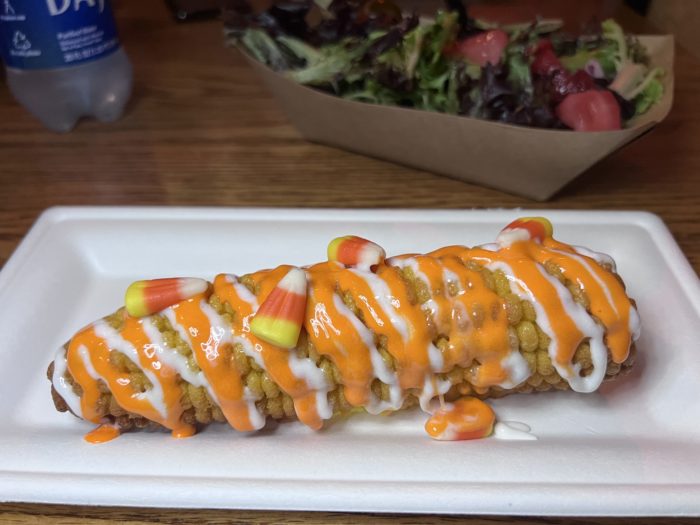 Our in-park reporter Chrissy tried the Almond Sweet Corn Cake, located at Pecos Bill this almond vanilla cake is drizzled with icing and topped with Candy Corn. She loved the dish as she found it not too sweet and said is the perfect amount to share. 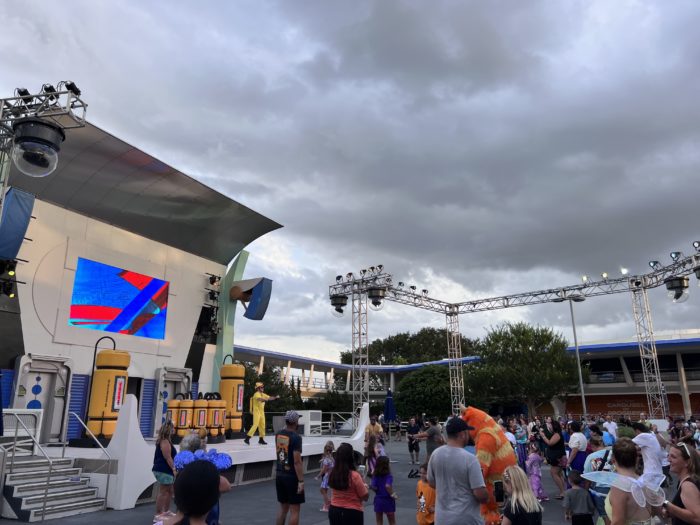 Storybook Circus Junior Jam takes place in Fantasyland and runs the entire length of the party.

Outside in Tomorrowland, you can catch the Monstrous Scream-O-Ween Ball with appearances by Mike Wazowski and Sulley.

And finally, the new Zom-Beatz Bash is happening inside Cosmic Rays, and includes appearances by zombies, cheerleaders, werewolves, and aliens from ‘Zombie 3’. We headed into this dance party early to try and spot Max Goof as Powerline but he hadn’t made an appearance yet.

Over in Frontierland, the Cadaver Dans perform throughout the night, and the Cadaver Dans are the Halloween party version of the Dapper Dans. You can find performance times in the My Disney Experience App. 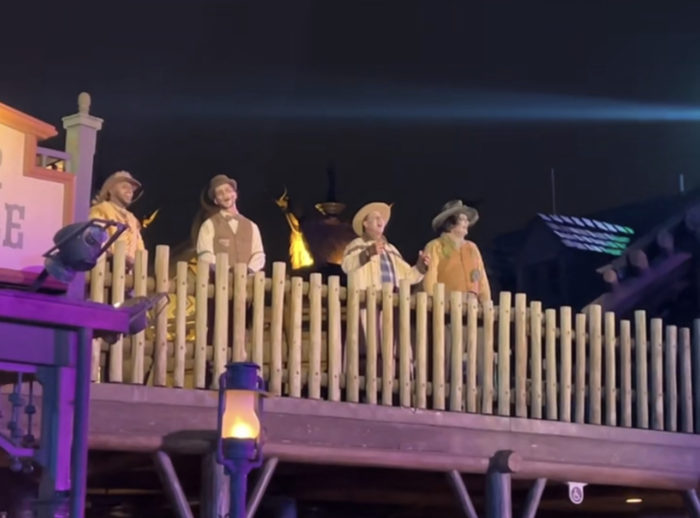 There is so much happening at this year’s Mickey’s Not So Scary Halloween Party, so be sure to come back as we continue to cover all the details of the party.

4 thoughts on “FIRST LOOK: Mickey’s Not So Scary Halloween Party 2022”