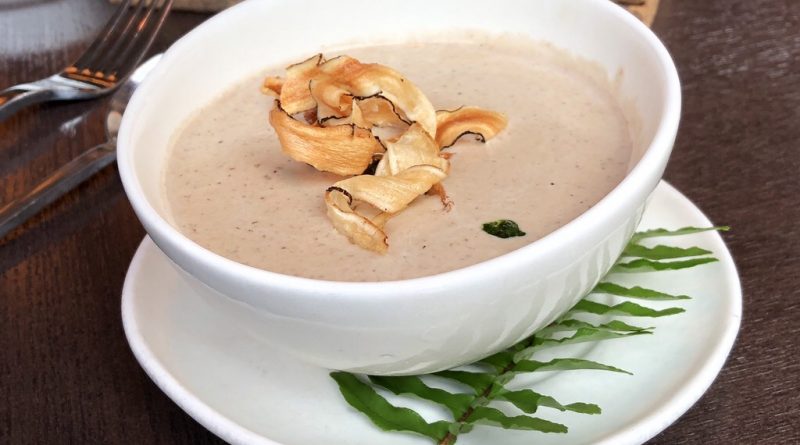 January is National Soup Month! I guess it makes sense, given that this time of year brings up great memories about coming in from the cold and grabbing a warm mug of soup to help thaw out from the frigid weather outside. But even in a place like Florida where it’s going to be 80 degrees in January this week, there is something comforting about soup. At many restaurants, soup is a throwaway item on the menu. Can’t decide on anything else, want a little extra with your meal but don’t want the salad….eh, order the soup. At Walt Disney World, however, there are some real stand-out soups that have their own cult following. Don’t believe me? Check out these five fan favorite soups that you can plan to sample on your next trip. When you say “Disney” and “soup”, this may be the first soup that comes to mind — Le Cellier’s cheddar cheese soup. The soup is so popular, that people would sometimes go up to the restaurant to ask if they could just get a container to go. Thankfully, you can also get this soup during Epcot’s International Food and Wine Festival at the Canada booth–no dining reservation required. The soup has a hearty combination of bacon, beer, and of course plenty of cheddar. Paired with a pretzel roll, I think this soup is one of the main reasons to go to Le Cellier. There are several locations that serve this New England Clam Chowder recipe around Walt Disney World, but my absolute favorite location is Columbia Harbour House. First, the chowder is delicious — it is everything a good New England Clam Chowder should be, with the creamy base and clam and potato with each spoonful. Second, it’s hearty enough that it can stand alone as a light meal. But what makes this wonderful for me is that it is something different from the typical fare at Magic Kingdom quick-service restaurants. I may have been known to get this to go and walk over to the Lunching Pad in Tomorrowland to get a pretzel for a lunch with a great place to people watch. Or, if you can’t wait, head upstairs in Columbia Harbour House to get one of the seats by the window to watch people wandering through Liberty Square on their way to or from Fantasyland or Frontierland. The existence of this soup is the sole reason I booked my first meal at 1900 Park Fare. The idea of a strawberry soup was so unique that I had to give it a try. That was back in the early 2000s, and the fact that it is still on the menu supports its popularity. It may not be something that you’d want to have often, but it is something you absolutely have to try when you visit this restaurant. Slightly tangy and sweet (but not sickeningly so), this soup is served chilled–the perfect summertime soup for Florida life. Even better, it is available at both breakfast and dinner — name another type of soup that can pull off that insertion into a menu. With the recent conversion of Artist Point to a character meal, the signature soup of the restaurant was one of the dishes that people were worried about losing. Just how good can mushroom soup be? This isn’t your canned condensed soup. Flavorful, creamy, and expertly seasoned, this is the epitome of comfort food. And now that it is being served in the Territory Lounge, perhaps in this more casual environment it becomes more acceptable to lick the bowl clean? (Go ahead, we know you want to — we won’t judge.)

Confession time — I don’t have a picture of this amazing offering even though I’ve eaten it every time it was on the buffet at Boma and every time they had it available as the soup of the day at The Mara. The reason? As soon as I get a bowl, I snarf it down so fast that there’s no time to pull out an iPhone for a foodie pic. Technically, Disney calls it a stew, but to me it’s more of a chowder or even just a “hearty soup”. But whatever you like to call it, it is DELICIOUS and probably my favorite soup in all of Walt Disney World. A slightly spicy blend of chicken, curry powder, tomatoes, potatoes, peppers, with coconut milk and honey to sweeten it up, this soup is a perfect meal for a cool day. Since I can’t show you a picture of the soup itself, I’ll do one better — I’ll share the recipe. This recipe comes from the Cooking with Mickey and the Disney Chefs book, and I’ve used this to make gallons of the soup at a time. Yes, you read that right. I have upscaled this recipe in the past to make several gallons at a time–some to eat right away and the bulk to put in the freezer to bring out one quart at a time. The only modification that I do is cook the chicken in advance (or take some already cooked chicken out of the freezer) so that I’m only making the soup itself at that time. Anyone else want to do a big soup cook-a-thon this weekend? And there you have my picks for the top five soups at Walt Disney World. Got any favorites that I left off the list? Do you ever make soups from Disney at home to enjoy? Let me know in the comments.