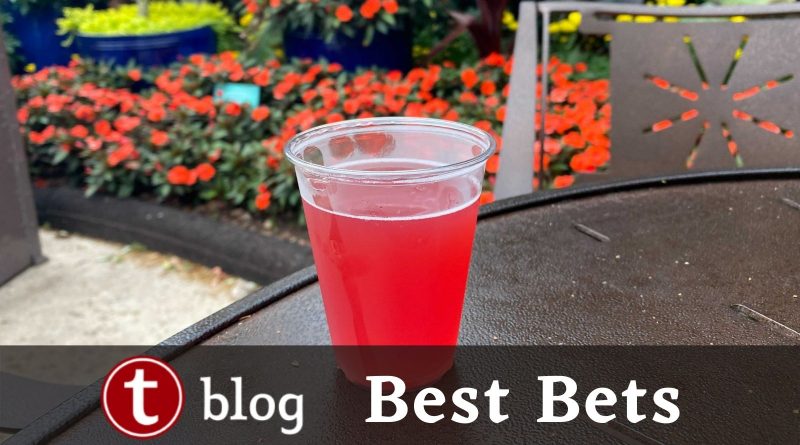 With spring upon us and rising temperatures, now is a good time to sip on a refreshing cold beer at the 2021 EPCOT Flower and Garden Festival. We still have nearly three months of this festival to go, so there’s plenty of time to discover something new. Last week I visited EPCOT on a blustery, stormy afternoon to try out a few festival offerings, with a focus on the beer.

Because of the storm, and having my preschooler with me, I admit my sampling was limited.  I did try out four beers and a cider, each a six ounce pour. Four out of the five selections were fruity and fantastic, perfect for the warm weather. The fifth selection is a poor fit for the festival and in overall taste.

Here are the four fruity beers and ciders of the Flower and Garden Festival that I really enjoyed:

The top beer is one of my new favorites for spring and summer. Admittedly, I love tropical flavors. I am a Florida girl after all, so the Coconut Key Lime Ale from Islamorada Beer Company satisfied my love of all things tropical. It is on the sweet side, but it tastes like instant vacation. The six ounce pour was full to the rim and had a decent amount of head on it. I would absolutely order again. You can pick this one up at the Citrus Blossom Booth near the Canada Pavilion.

This next beer surprised me. I do not like sour beers at all. I know I am not trendy, moving on. But the Guavacation Sour Beer from Ivanhoe Park Brewing right here in Orlando had a great guava flavor. It paired surprisingly well with Lamb Curry and that’s what pushed it into second place for me. You can enjoy this beer and the flavors of the islands at the Isla Fresca Booth.

There’s quite a few watermelon beers and ciders at the festival, which makes sense since the festival heads into the summer season. I really enjoyed the Watermelon Hard Cider from Bold Rock. First it’s a pretty looking cider, but most important the flavor was slightly sweet, but not overly so. This is truly a refreshing choice available inside World Showplace.

My last pick for a good fruity beer at the EPCOT Flower and Garden Festival is one that is not actually too fruity. The Watermelon Mint Wheat Ale from 81Bay Brewing Co. is a good choice if you want a touch of fruit, but not too much. I also did not detect much wheat flavor either, so I was a little disappointed in this beer. It is available inside World Showplace.

I also tried the 3 Daughters Brewing Maple Bacon Stout. This one disappointed greatly. It was flat, and did not fit the spring time theme of the Flower and Garden Festival. Unless you’re an absolute die-hard stout fan I would pass on this one. But the other beers and cider listed above are great choices if you’re looking for beers that are fruity and refreshing.

Do you like to try out different beers at EPCOT’s festivals, or do you prefer to stick to food? Let us know in the comments!