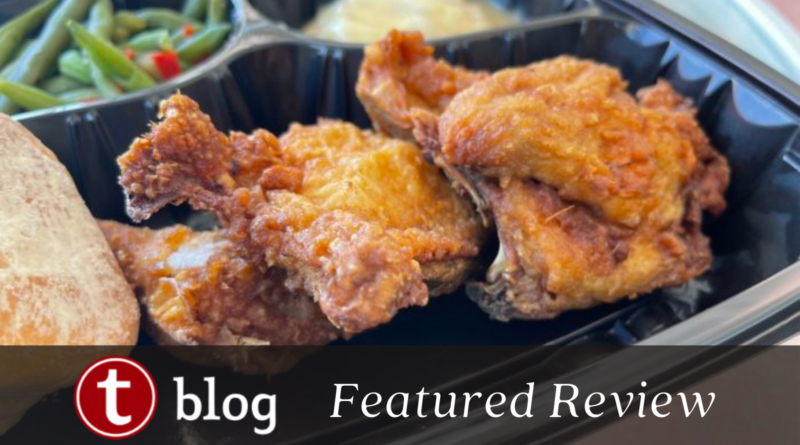 Plaza Inn is a quick service restaurant located on Main Street, U.S.A. in Disneyland in Anaheim, California. Its most famous dish by far is the fried chicken meal, which is many people’s favorite meal in all of Disneyland. According to TouringPlans.com and Unofficial Guide to Disneyland readers, Plaza Inn is the second highest rated restaurant in Disneyland park, with 93% of readers giving it a thumbs up. In this post we’ll take a look at its entrees, and see if there’s been any significant downgrades since the park reopened earlier this year. 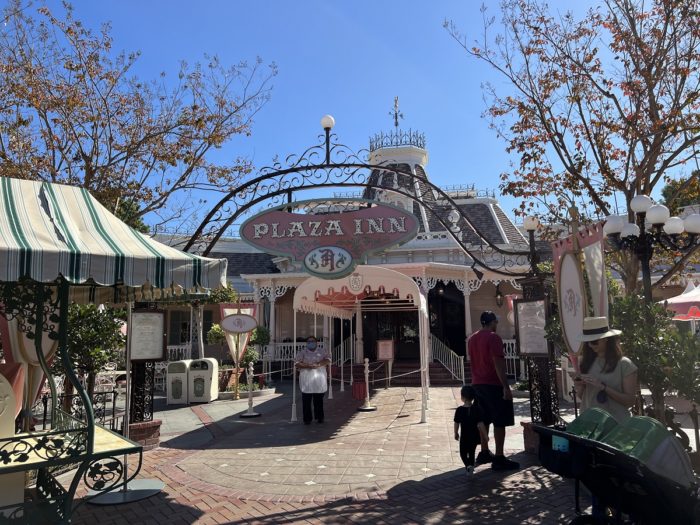 Plaza Inn is located on the right side of Disneyland’s central hub, to the right of the entrance to Tomorrowland. Plaza Inn is open as a character dining breakfast buffet location from park opening until 11 a.m. Lunch service usually begins at 12 p.m. 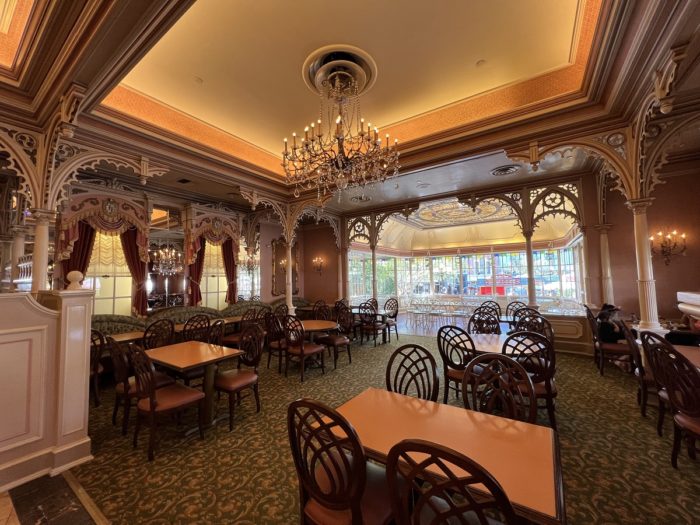 Plaza Inn’s dining room has a gorgeous Victorian-style with comfortable seating and a lot of brocade and brass. If you can find a seat inside it’s a wonderful place to sit and relax. 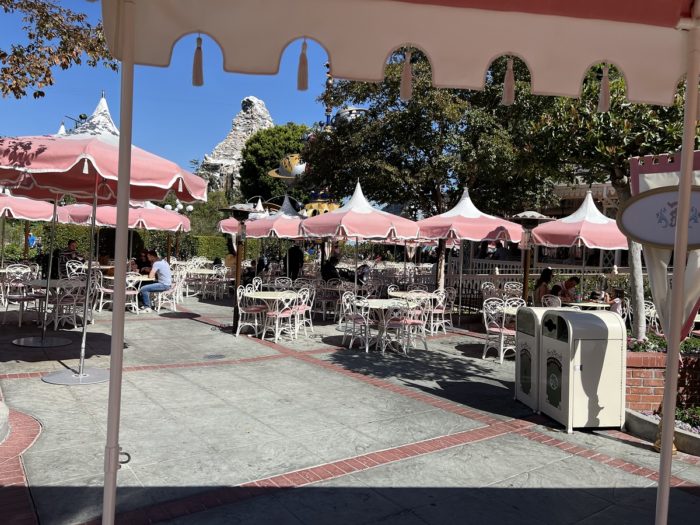 The large outdoor patio is also nice. It provides a great view of Main Street, where parades, the Disneyland Band, and an endless amount of people stroll by. It’s great for people watching while you rip your chicken off the bone. 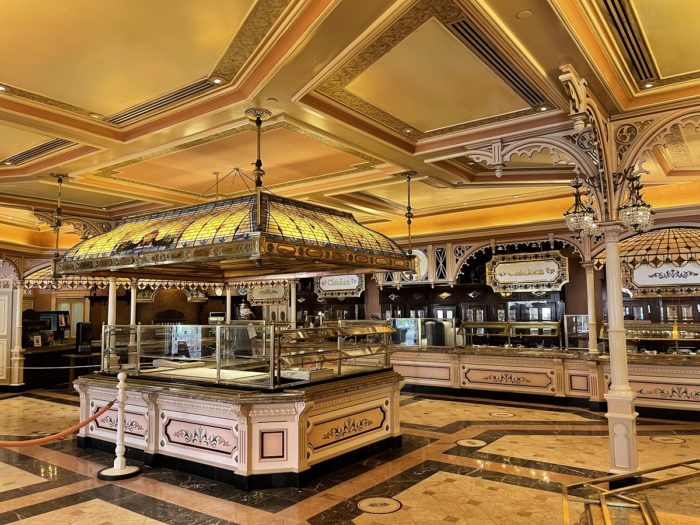 Food at Plaza Inn is served buffeteria-style. You grab a tray and head to the stations where specific entrees are located. Once you have everything you need, you wait in a separate line at a cash register to pay. Chicken and pasta dishes are located along the back wall, while salads and desserts are on an island in the middle of the room. 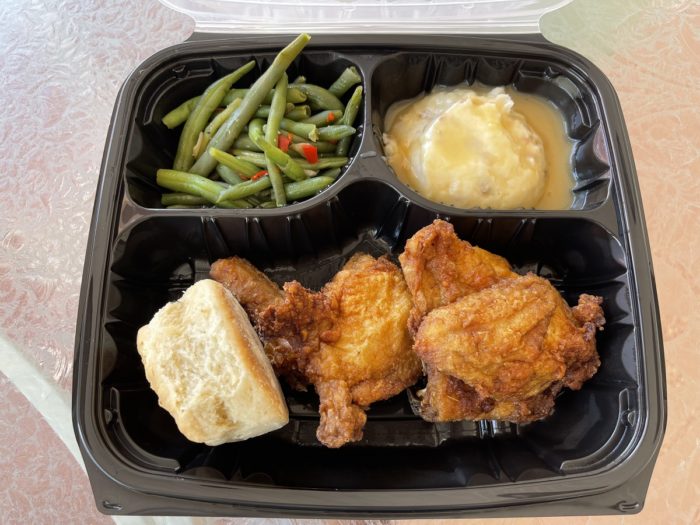 We’ll start with the famous fried chicken meal (seen here served in a plastic container, which it comes in if you order via Disney’s mobile order service). We can’t say enough good things about this fried chicken. It’s perfectly breaded, spiced, juicy, tender, and delicious. The fried chicken meal is priced at $18.99, which makes it one of the most expensive quick service meals in the park, but you definitely get what you pay for. Besides being very tasty, you also get a generous portion of food here. This is a much better bang for your buck than a basic fast food hamburger for $12 at one of the other quick service restaurants. While I’m on the subject of price, it’s hard to believe that just a few years ago this dish was only $14. 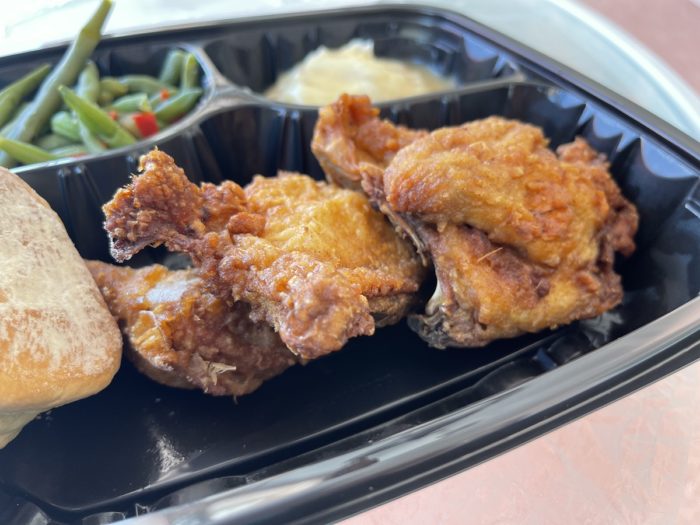 Also included with the fried chicken meal is a side of green beans, mashed potatoes, and a biscuit. If you’re not a fan of green beans you can sub it out for another serving of potatoes. 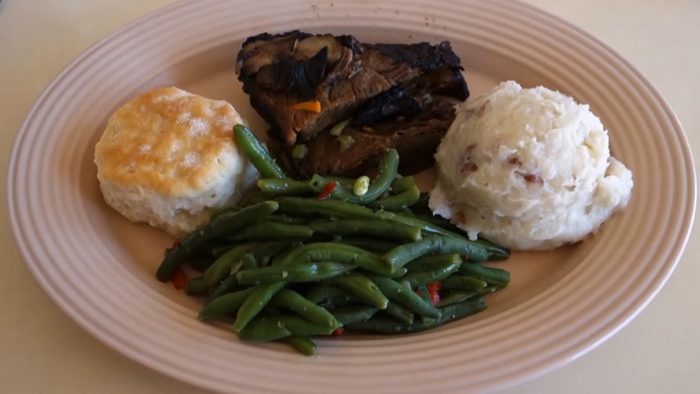 The pot roast ($18.99) is the hardest entree to recommend because of its inconsistency. I’ve had it a number of times over the years and sometimes it’s perfectly cooked and moist, while other times it’s bland and dry. With both dishes being the same price it’s impossible to recommend this over the fried chicken. Note: The pot roast comes and goes from the menu, so it may not be available during your visit. 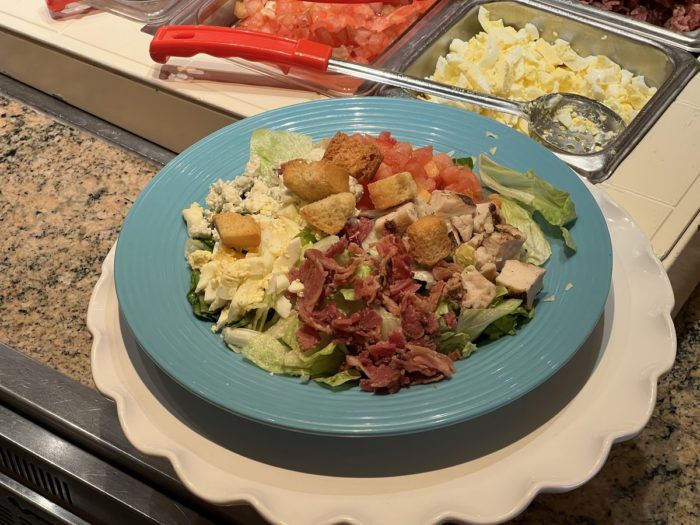 One of the staples of Plaza Inn’s menu is the cobb salad ($13.49) with mixed greens, chicken, bacon, egg, tomatoes, and blue cheese dressing. It’s very good and I believe it’s currently the only place in the entire resort where you can get a cobb salad. I like to get this as a side salad and share it with another member of my party. 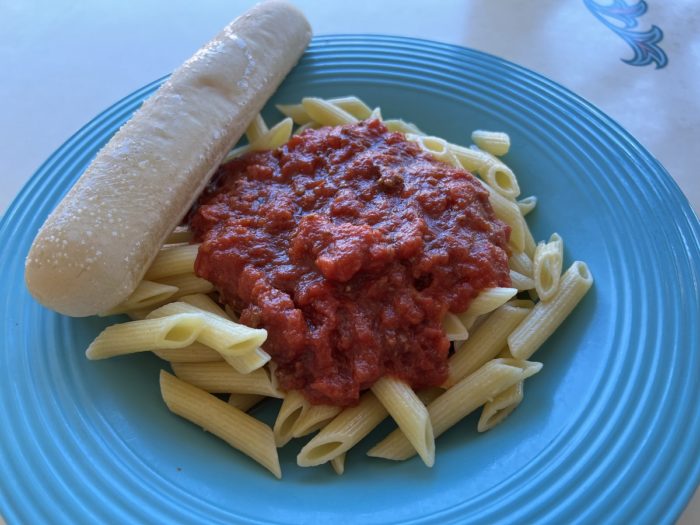 The most boring dishes on the menu are the pastas ($14.99). Pictured above is with the bolognese meat sauce. Also available are fettuccini and marinara sauces. DO NOT order this from Plaza Inn. This is the kind of dish that should be reserved for when you unexpectedly get off work late and need to throw together a quick dinner in 10 minutes. Also, the bread stick is a dead ringer for Crazy Bread from Little Caesars. I would not be able to tell the two apart if you made me do blind fold taste test. 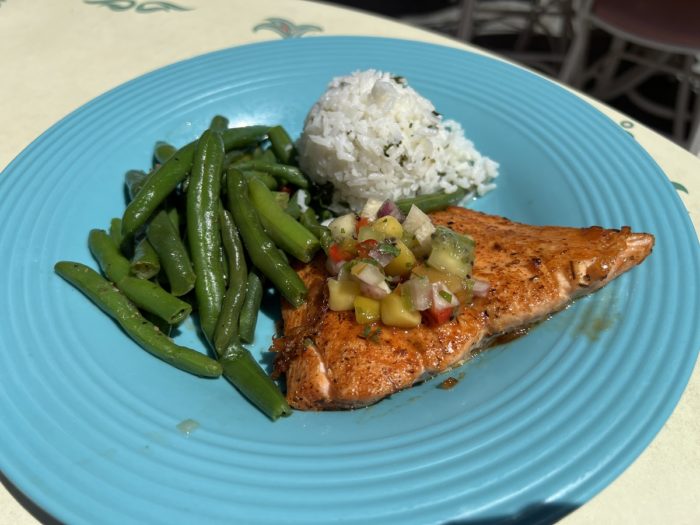 The Chipotle-Pineapple Glazed Salmon is a great tasting entree. The sweet pineapple glaze mixed with the savory chipotle salmon offers a unique taste you won’t find at many other Disneyland restaurants. It’s also a much lighter meal than any of the other items offered at Plaza Inn. However, I don’t think it’s a good value at $18.49. 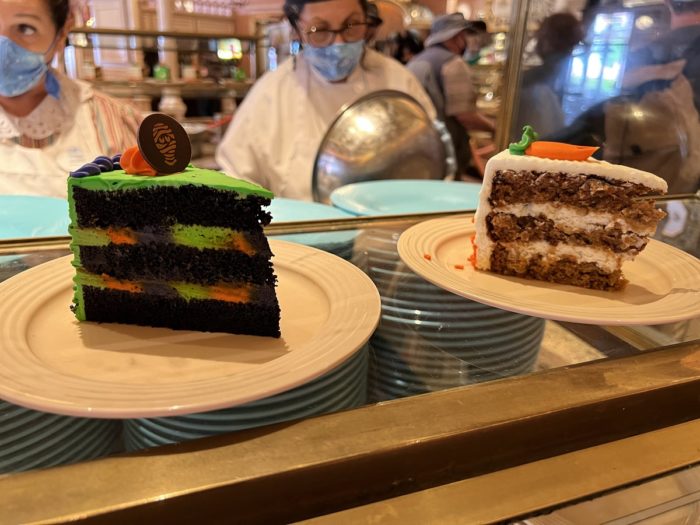 For dessert Plaza Inn usually has at least one seasonal item, such as the “monster cake” pictured on the left, as well as carrot cake. 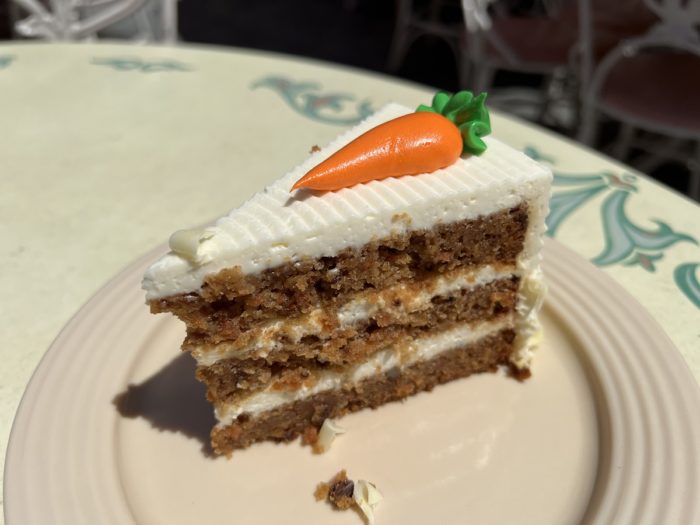 I’m a huge fan of carrot cake and I love Plaza’s version of it. I’m not saying it’s anything special or unique, but there’s something so satisfying about being in Disneyland and having a huge piece of carrot cake all to my self. The cake slices are $5.99, and it’s worth mentioning that they are about half the size as they used to be.

Overall Plaza Inn has one excellent entree and a few decent ones. It’s remarkable that a single item makes it as highly rated with our readers as it is. They’re not wrong though, you will not be disappointed with the fried chicken. Some people even say it’s better than the world famous chicken over at Mrs. Knott’s at Knott’s Berry Farm. I’m not sure I’d agree with that, but it can definitely go toe to toe with it.

What do you think of Plaza Inn’s fried chicken? Is it better than the chicken at Knott’s? Does Plaza Inn deserve to be rated as high as it is? Let us know in the comments.