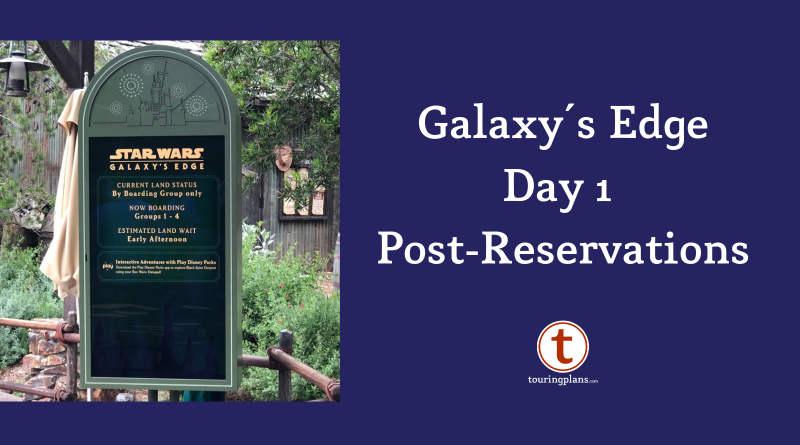 Before Galaxy’s Edge entered its reservation-only period nearly a month ago, there were all sorts of predictions of massive crowds, catastrophic traffic jams, brawls over the last drops of blue milk, and more. Thankfully, the reservation period went smoothly, with those who had secured reservations having a relaxing time in an exciting new area and surprisingly low crowds at Disneyland in general. The thought was that perhaps the concerns about crowds had actually kept locals away, plus the limited number of reservations available. 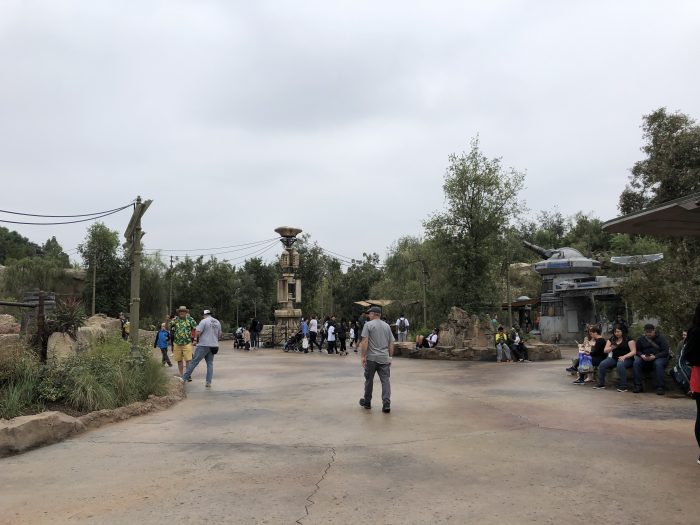 As the end of the reservation period neared and the time of “it’s open” approached for everyone, those concerns started to creep back into discussions, with fears seemingly “proven” by the challenges experienced at Universal Orlando with the opening of Hagrid’s Magical Creatures Motorbike Adventure. And so, with that in mind, intrepid TouringPlans reporter Guy Selga kissed his loved ones goodbye to brave the first day of Galaxy’s Edge in the free-for-all days. 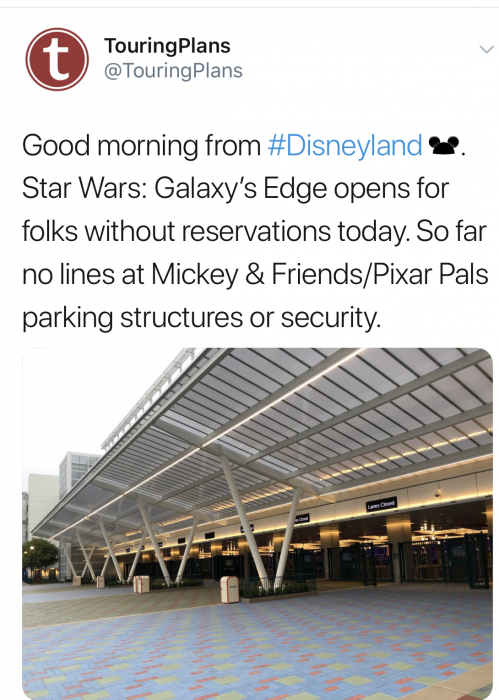 At 6:45 a.m., it began to be clear that maybe the touching memorial that we had painstakingly written up for Guy might have been a bit premature. Certainly there were people waiting to get in at the gates of Disneyland, but it was a far cry from the doom and gloom predictions. In fact, one hour before park opening, crowds looked fairly typical for a summer day at Disneyland. 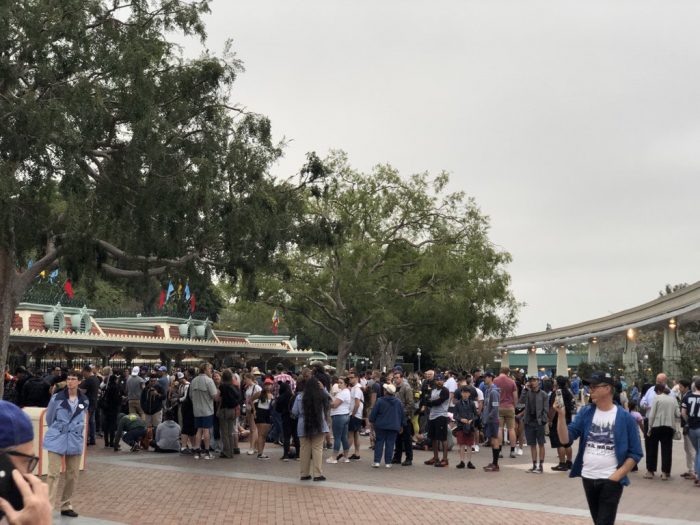 Once inside, guests wanting to head fo Galaxy’s Edge were directed to the left side of the hub. 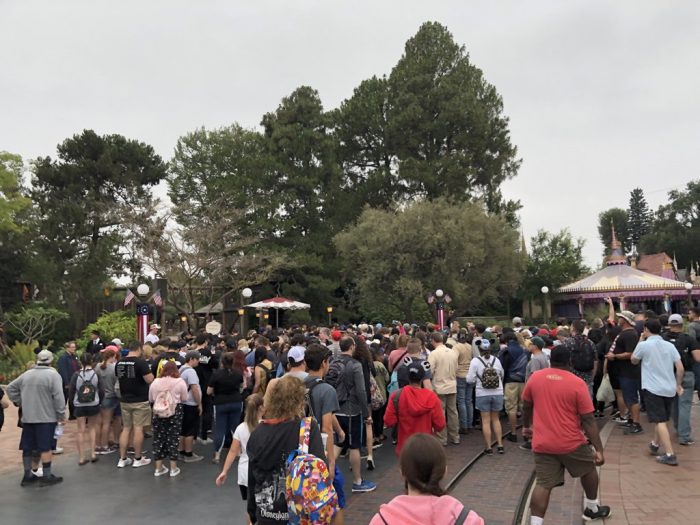 Starting at 7:30 a.m., guests were escorted from the hub to the Critter Country entrance to Galaxy’s Edge. 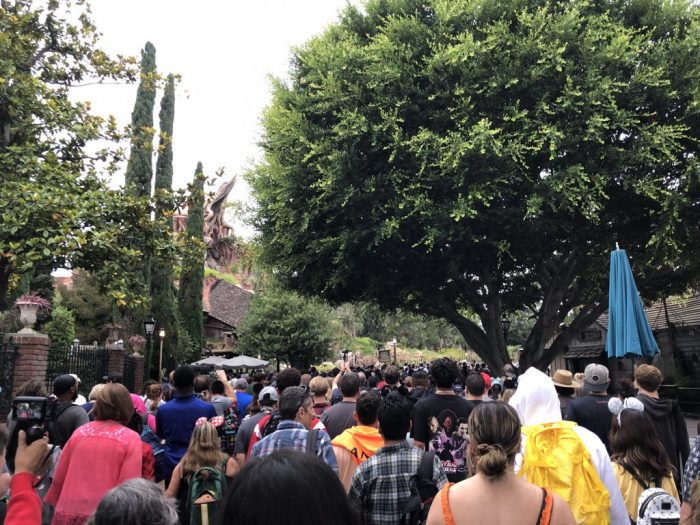 Because reservations for Oga’s Cantina and Savi’s Workshop are made through the Disneyland app, the big rush in the morning is to Smugglers Run. 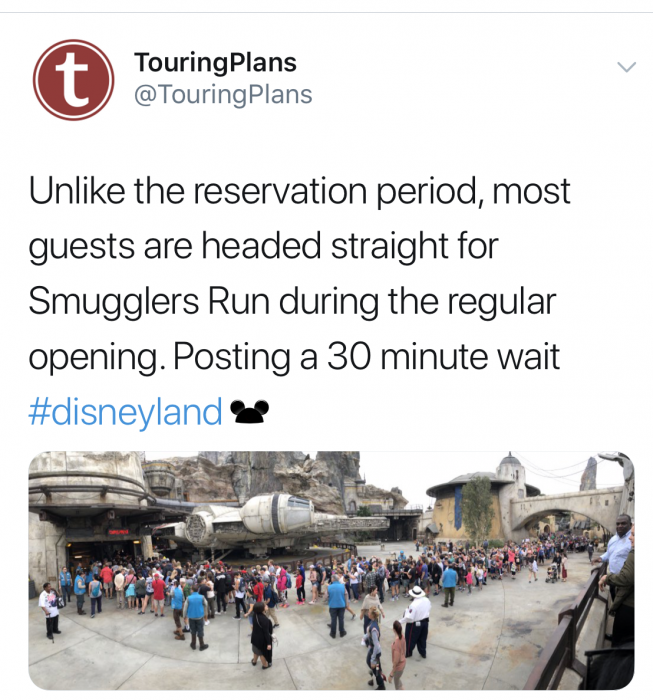 If you didn’t have the Disneyland app, or didn’t wish to use it, paper boarding group reservations were available. 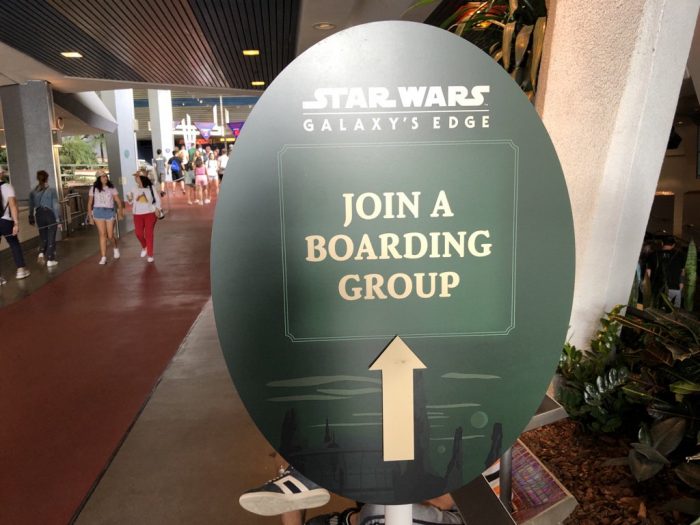 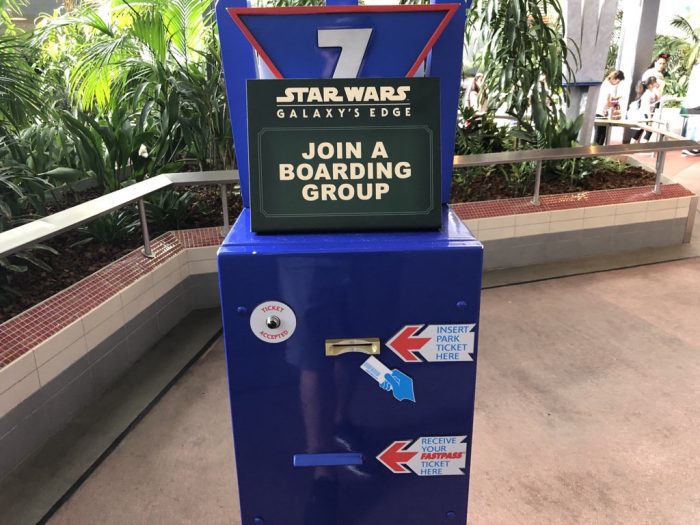 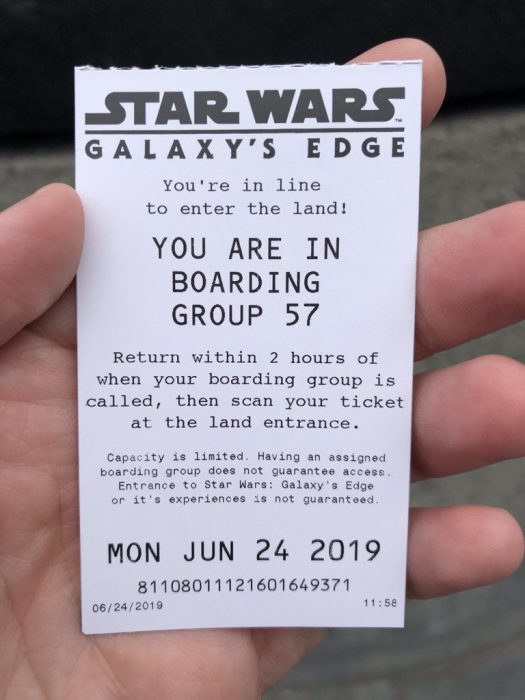 Once your boarding group was approved for entry, you received a push notification on your phone to let you know that you had a 2-hour window to head over to Galaxy’s Edge.

Disney also had posted signs around the parks so that you could check and see what groups were boarding, especially useful if you went with a paper boarding group ticket. 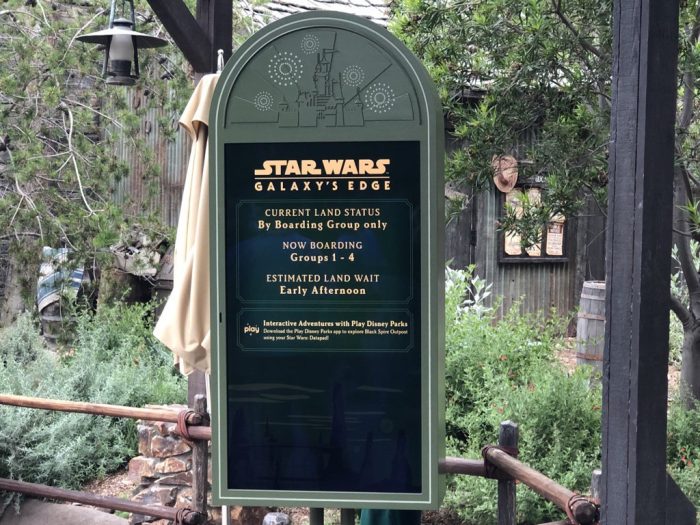 For most people, the process was smooth. There were a few reports of people not receiving their push notifications (for instance, if they had disabled push notifications for the Disneyland app or had their phone set to Do Not Disturb), and so later in the day, Disney made the option available to manually check boarding group times, with some technical snags at first that were later resolved. 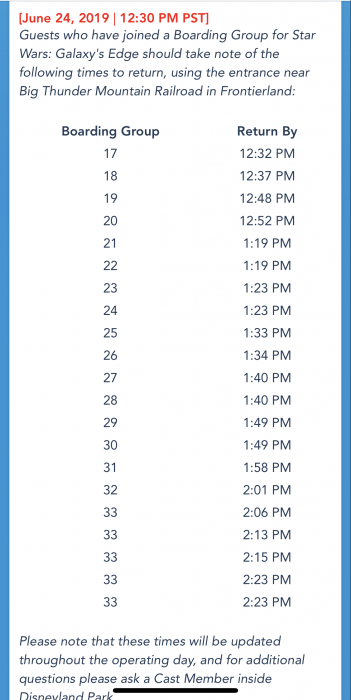 Overall, how was the experience inside Galaxy’s Edge? Very similar to the reservation-only experience in some ways, although Smugglers Run was the hot ticket for the morning. Throughout the morning, the posted wait time for Smugglers Run fluctuated wildly. Within a five-minute period around 9:00 a.m., the posted wait time went from 110 minutes to 65 minutes to 80 minutes to 140 minutes and then back to 110. An extended queue area was set up that went backstage during the peak morning rush. Once the morning rush was over, however, wait times ranged from 30-80 minutes throughout the day. (You can see the wait time data for yesterday here.) Around 5:00 p.m., crowds were moderate enough that the land was open to all, without the need for boarding groups. Crowds remained low throughout the evening. 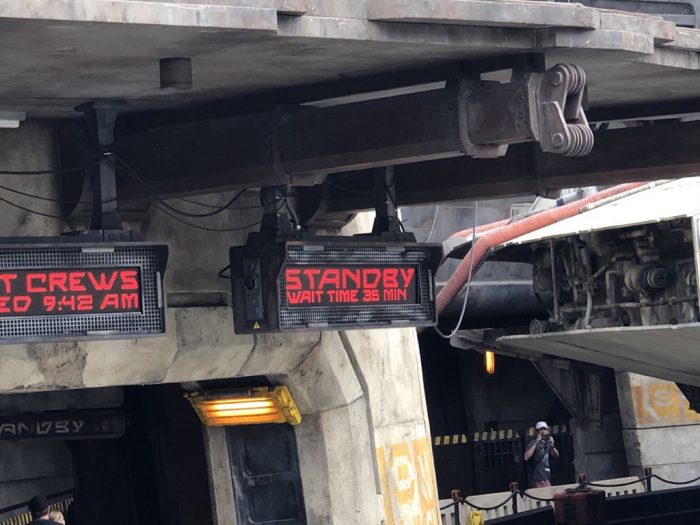 Some merchandise had sold out during the reservation-only period and has not yet been replenished. Some items like kyber crystals, sabacc cards, the highly collectible metal gift cards, and some specialty lightsabers were not available today. It is expected that all of these items will be replenished as time goes by. 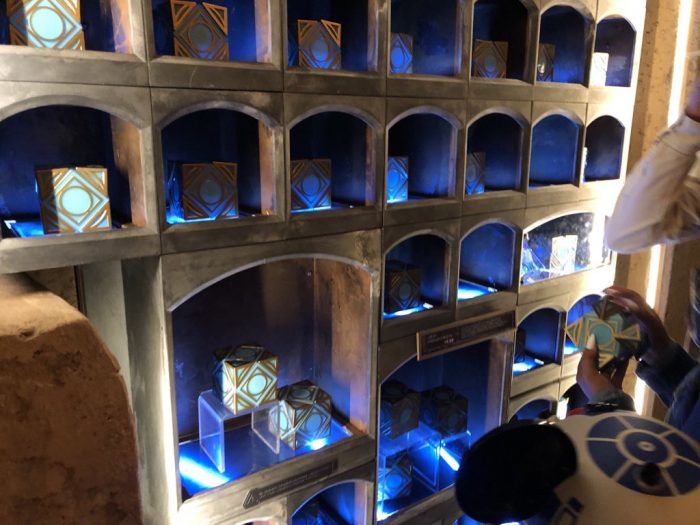 If you wanted to grab a bite to eat at Docking Bay 7, or just wander the shops, today was a wonderful day to explore Batuu. The metal sporks at Docking Bay 7, which had the ability to exert a Jedi mind trick and get what we’d like to believe are otherwise honest people to walk out of the land with them, are no longer available and likely won’t return. 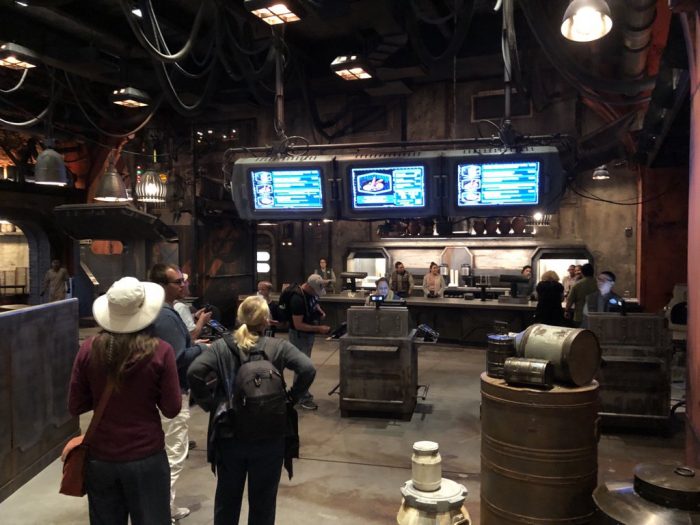 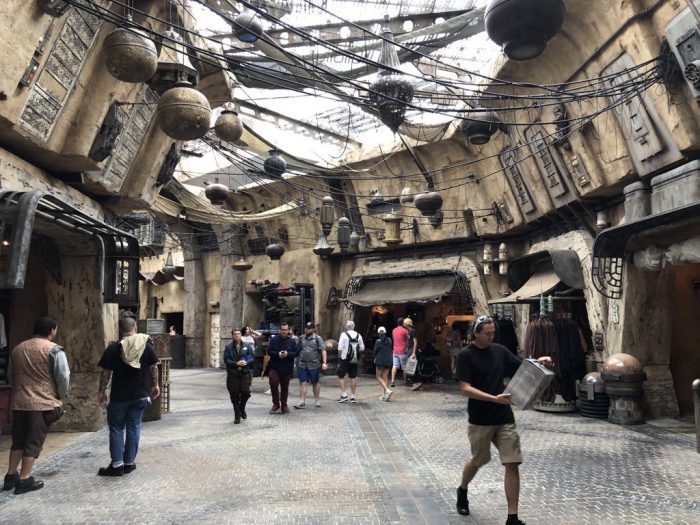 Will Galaxy’s Edge continue to stay pleasant for crowd levels with the ability for anyone who has a desire to visit to be able to? Only time will tell. It is possible that people specifically avoided today and that this weekend will see a surge of visitors. It is also possible that if crowds stay relatively soft, Disney could consider lifting some pass blockouts. Cast Member blockouts have already been lifted for the next couple of weeks, with the exception of July 4.

Did you visit Galaxy’s Edge for general opening day? What was your experience like? Let us know in the comments.