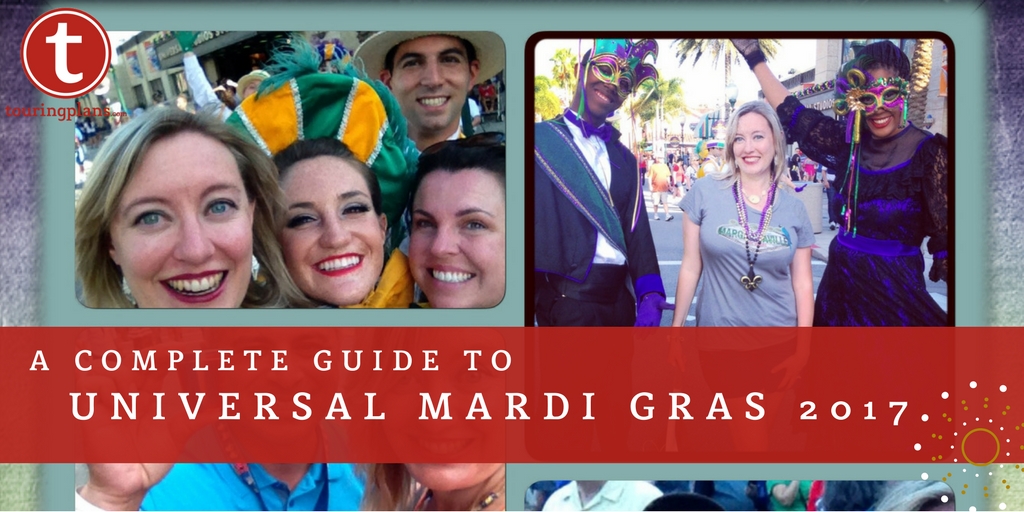 Thousands of plastic beads patiently wait to be tossed into the hands of eager park guests. Spicy Cajun food will soon be devoured. Parade performers practice endlessly, waiting for their time in the spotlight. Universal Mardi Gras 2017 is about to begin!

With more consecutive nights than ever before, Universal Mardi Gras 2017 looks to be a bit different than years past. There’s lots to see and deux so check out this guide to make sure you don’t miss a beat! This year Universal Orlando’s Mardi Gras is a little shorter than before, February 4 to March 24, 2017. However, this year is different because the parade, special food, and other festivities will bring the best of the Big Easy every single night through March 24, 2017.

One the best features of Universal Mardi Gras are the bands brought in from New Orleans itself that perform in the French Quarter Courtyard (in the New York area of the park near Revenge of the Mummy and across from the soon-to-open Race Through New York Starring Jimmy Fallon). Many people aren’t aware that these authentic bands perform in the French Quarter Courtyard, but they are a real treat and straight from the land of the Big Easy, so check them out. Here’s the line up:

The line up looks a little different than previous years with an obvious emphasis on brass bands, whereas there used to be a mixed of jazz, blues, and zydeco.

Get your stomachs ready for Cajun cuisine. No word just yet on what new items might be on the menu, but in years past the gumbo, jambalaya, twisted taters, and Cajun shrimp with red beans and rice have all been good choices. The desserts and sweets that are offered, like beignets and king cake donuts, are excellent indulgences too! It is hard to beat last year’s incredible line up, so naturally many Mardi Gras fans are a little disappointed in this year’s list. Still, there are some big names and a very diverse mix.

The exact time of the concerts hasn’t been published but on concert nights usually the parade will start at 7:45 PM and then the concert begins around 8:30 PM. Check park map to confirm. If there are any performers that you absolutely must see, you’ll want to be at the Music Plaza Stage 45 minutes – 60 minutes beforehand.

The Music Plaza Stage does not have any seating, so bring along a blanket or towel, grab some snacks and drinks, and treat it like a picnic. Personal chairs are not allowed. The concert itself usually lasts 45 – 60 minutes, depending on the performers. If you don’t get a decent spot or just want to catch a glimpse, the concert is broadcast on two large monitors on the outside edges of the plaza.

This parade is very family-friendly and considered to be one of the most unique parades in any theme park, anywhere. 2017 brings six new floats to the parade, all based on mythical creatures. These floats are Manticore’s Majesty, The Rise of the Garuda, The Dance of the Dragon, Phoenix from the Flames, Garden Sprites, and The Flight of the Pegasus. The costumes in each of these floats’ units are sure to be breathtaking!

Two great features about Universal Orlando’s Mardi Gras parade are the “Little Jesters” Viewing Area for kids and the Annual Passholder Viewing Area. The kids area is near the Brown Derby shop in the Hollywood area. This is a great designated spot for kids to be able to be front and center and catch a ton of beads as they are tossed from the dazzling floats. You’ll want to get to this area about 45 minutes before parade time.

The Annual Passholder area is near Mel’s Drive In. It fills up fairly quickly on busy nights, about 30 minutes before parade time. But, it faces the gate that the parade steps off from, providing a unique vantage point and giving Passholders the chance to see the parade right as the party gets started.

The downside to both of these areas is it is near impossible to watch the parade from them and make it over to the Music Plaza Stage in time for the Headliner Concerts. But the good news is since the parade and French Quarter festivities are happening every night through March 24, you’ve got plenty of opportunity to see the parade without worry of the concert. With 50 nights of 2017 Mardi Gras fun headed our way, it’s time to celebrate. Make sure you take advantage of the special food, entertainment, enjoy the parade, and most of all the fun atmosphere. For many Universal Orlando fans Mardi Gras is one of their favorite offerings. Be sure to really dig in and laissez les bon temps rouler (let the good times roll!)