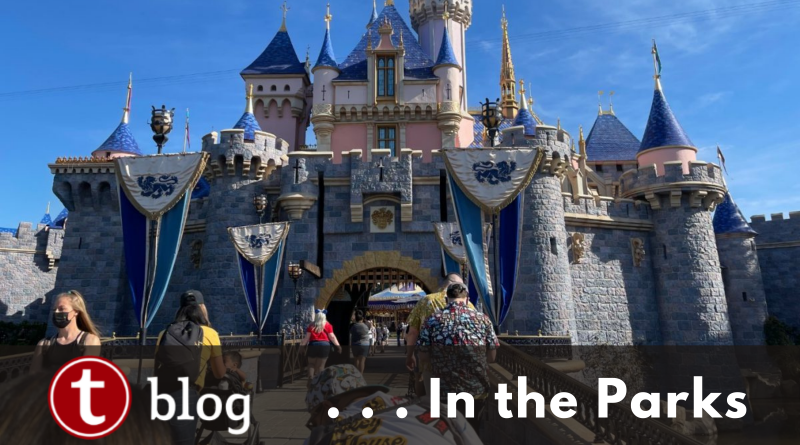 Disneyland is back and I’m sure many of you have trips planned in the near future. To give you a better idea about what to expect, we thought we’d share what our experience was like during the morning of the park’s grand re-opening. This includes how social distancing measures affect queues, arrival procedures, parking, experience entering the park, and more.

Disney announced the Mickey & Friends Parking Structure would open at 6:00 a.m. for guests arriving at the park for the re-opening. They haven’t announced how long this extra early opening practice will continue, but we don’t expect it to be very long. 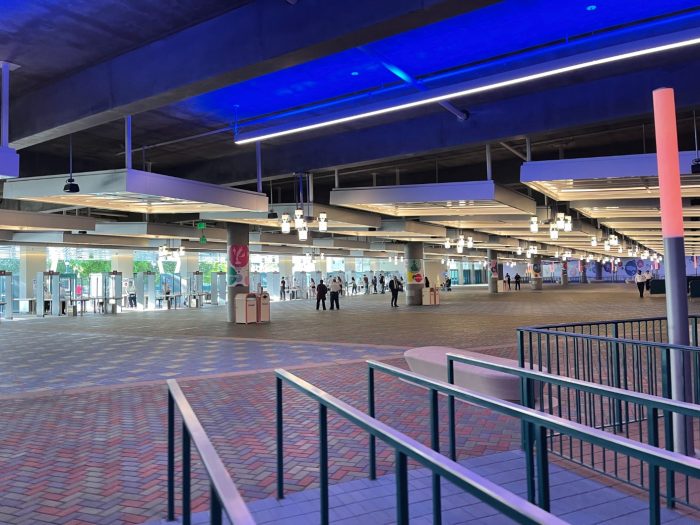 We arrived at Mickey & Friends exactly at 7:20 a.m. I was expecting a decent wait, but thankfully all booths where fully staffed and my parking toll was paid for in minutes.

Temperature scan and security was just as breezy. The bag check and metal detector process was the same as it was in pre-COVID times. What is different now is that parking lot trams are not running. To get to the parks you must walk along the former parking lot tram route. The distance is about a quarter of a mile. There are benches along the way if you need a break. 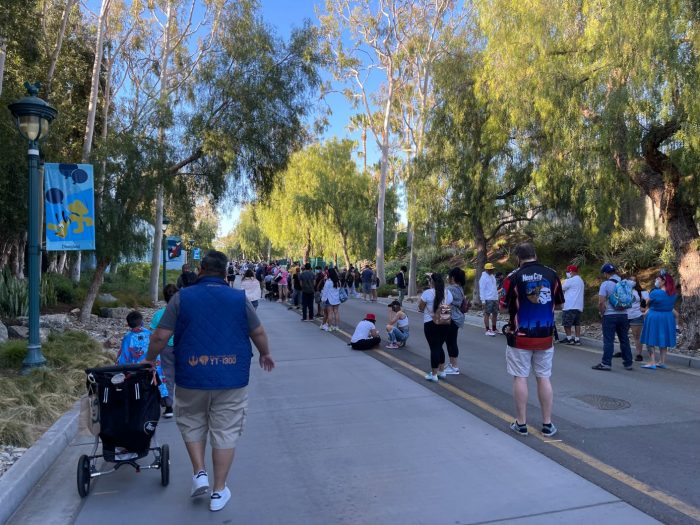 Pent up demand for Disneyland is obviously huge, so thousands of visitors arrived early to wait in line to enter Disneyland. Three huge lines spanned the entire length of the tram route, along with more lines in the esplanade between Disneyland and DCA. By the time I arrived I was near the middle of the previously mentioned queues.

Unexpectedly, Disneyland opened one hour early. This meant lines started to move not long after I got in line. Disney was well prepared for the morning crowds and lines moved quickly and efficiently. 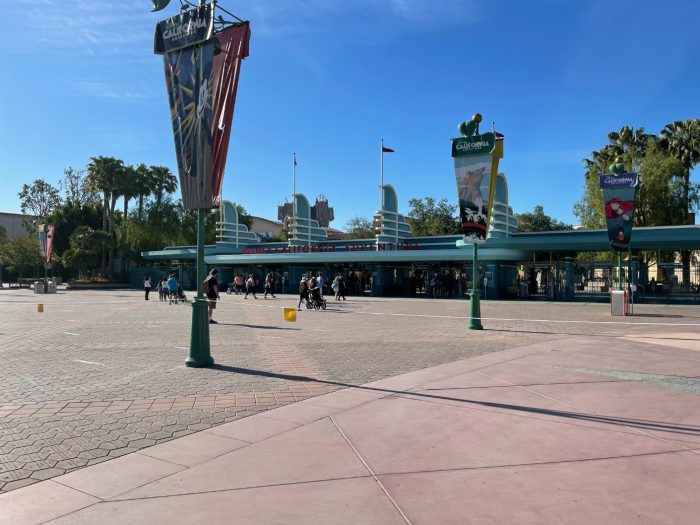 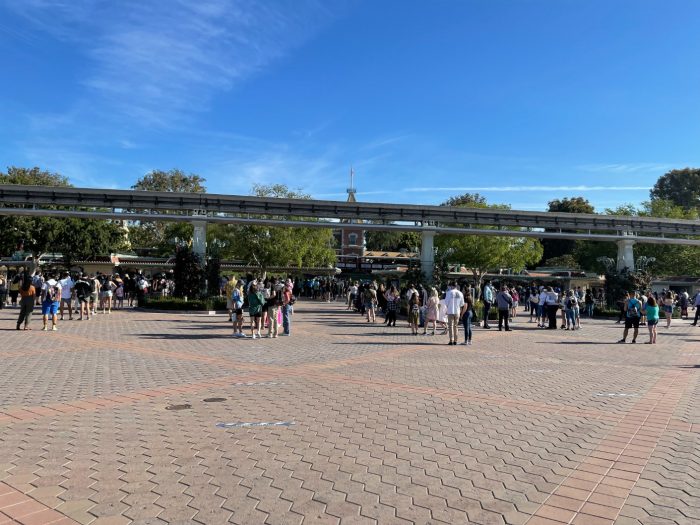 If you’re not familiar with Disneyland’s front entrance, each gate has two turnstiles and two cast members scanning tickets. Due to social distancing rules, single file lines are organized at each gate. When parties reach the front of the line, a cast member will call them over to scan their tickets. This was a pretty quick process even though the line at each gate stretched past the monorail beams. I stepped foot in Disneyland at 8:20 a.m.

Being in Disneyland again felt great. Cast members lined each side of Main Street, U.S.A. and they were waving and greeting guests as they walked past. This was such a nice touch! 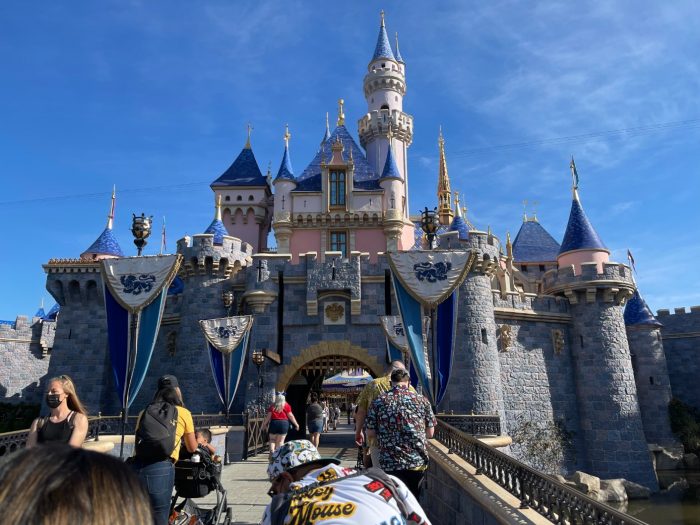 Many ride queues have been altered due to social distancing guidelines. In this section I’ll go over some of the notable ones. 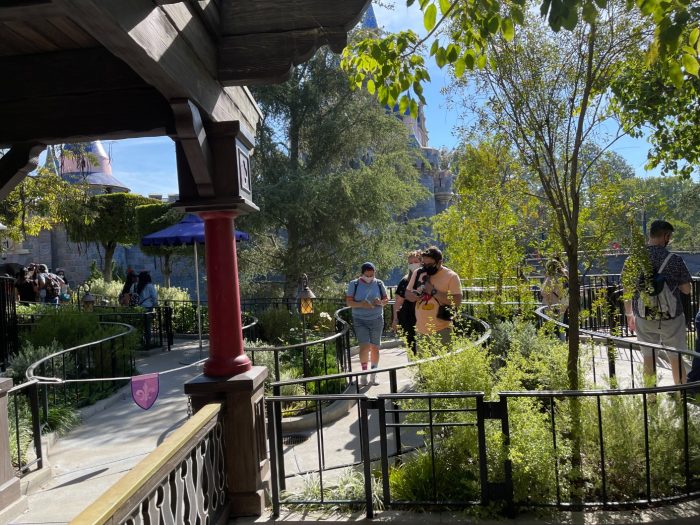 Fantasyland dark rides, specifically Snow White’s Enchanted Wish and Peter Pan’s Flight, have had the majority of their queues relocated to the areas on the sides of Sleeping Beauty Castle. For example, the Snow White line snaked in and out of Fantasy Faire, and even used some of the mini-land’s meet and greet queue. 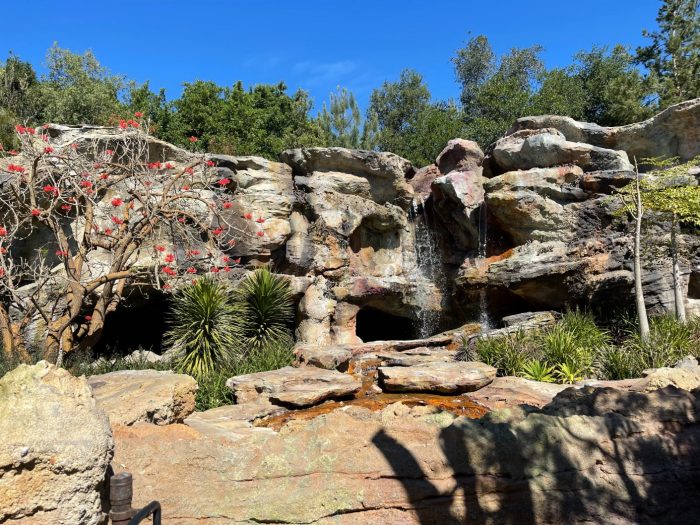 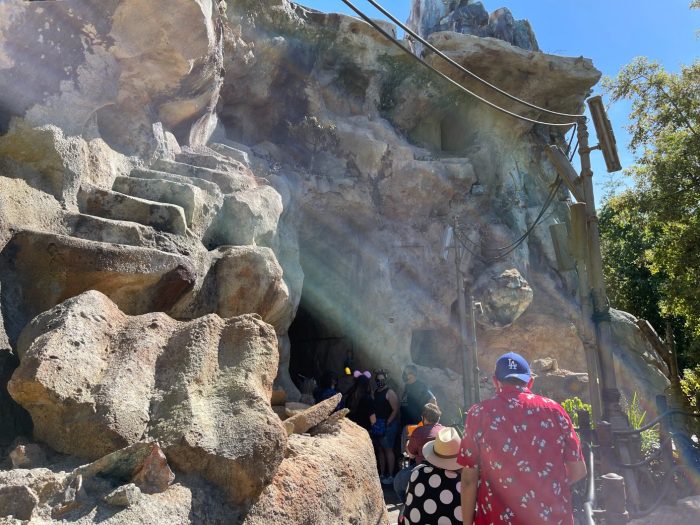 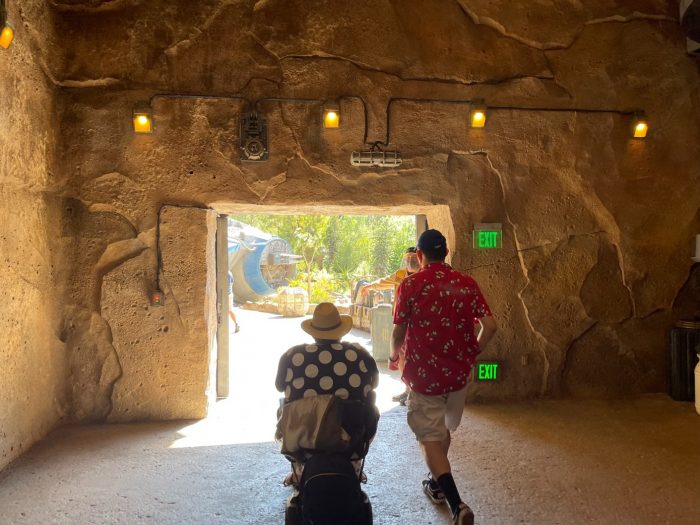 Over at Rise of the Resistance, most of the queue takes place in the walkway in front of the ride. I waited in this line, had my boarding group barcode scanned, and was then directed to an outdoor queue that led directly to area where you load the transport. That means no Rey and BB-8 pre-show. 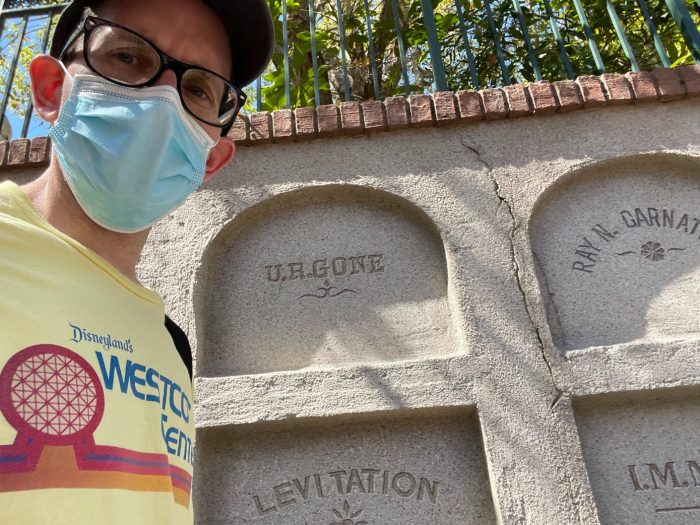 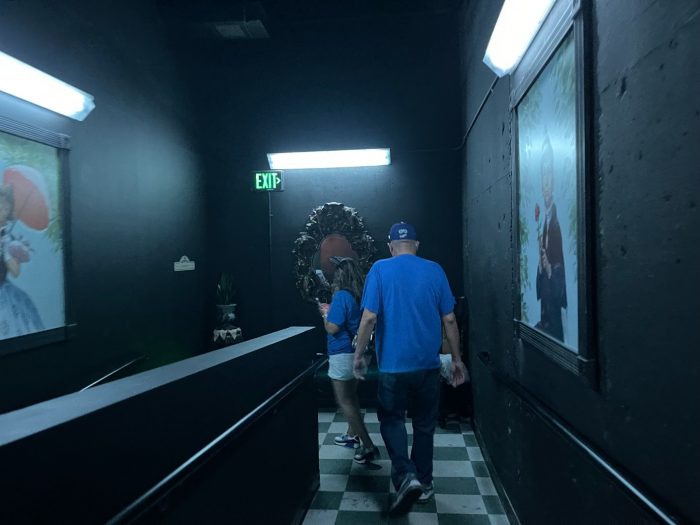 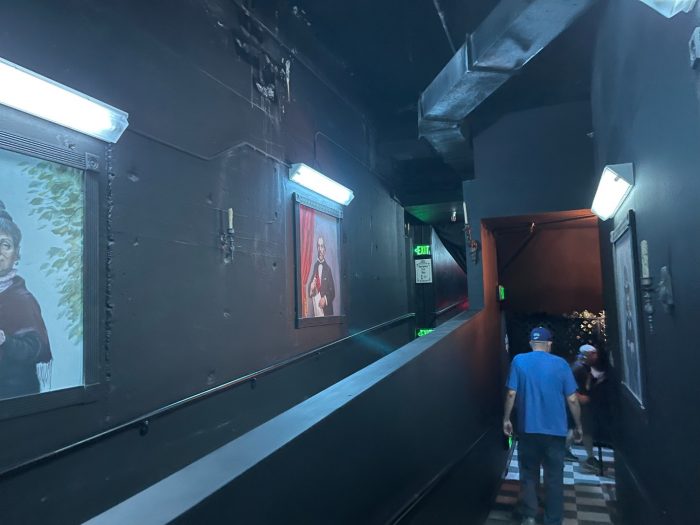 Haunted Mansion was really odd. Only 5 groups are loaded in to the stretching rooms at a time. This drastically impacts the wait time for the ride. Now the interesting part, by coincidence I happened to be in the area of the queue near the ride’s FastPass distribution machines. I was asked, “Are you okay with stairs and skipping the stretching room?” I said yes and was led to a what is usually a backstage area. It’s clearly been decorated in anticipation of guests walking through it. It turns out CMs are using this path as queue between the times the stretching rooms are loading and unloading. This cut my wait time down from the posted 50 minutes to a measly 10. 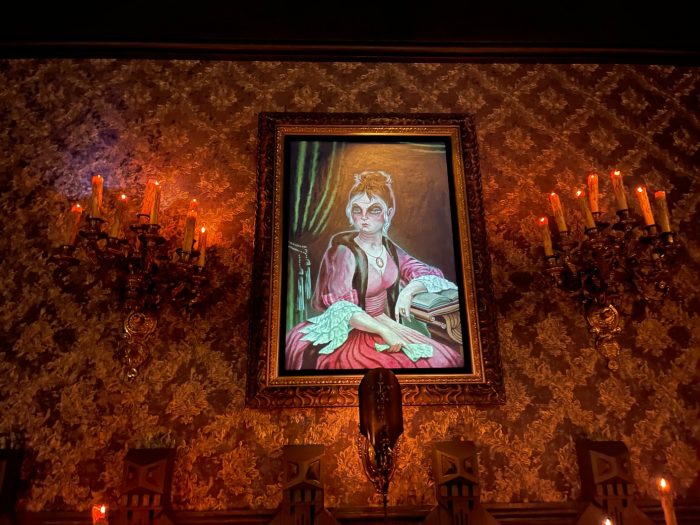 Speaking of Haunted Mansion, you may notice an old favorite returning to the portrait gallery. 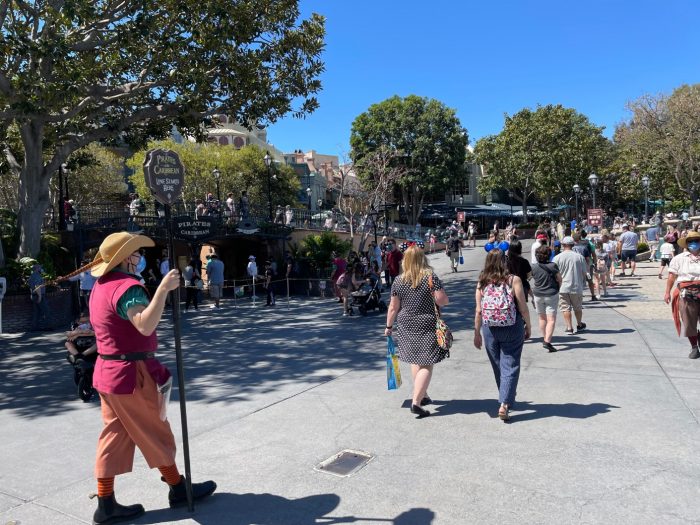 Many other rides, such as Pirates of the Caribbean, Space Mountain, and Indiana Jones Adventure, have the majority of their queues outside of the ride building. For example, at Pirates, you’ll wait in the outdoor queue that weaves around the path near Rivers of America and then be held at the entrance doors to the interior part of the queue. Groups are held at this door until it’s time to get on to the boat. This is done to minimize the time spent indoors. 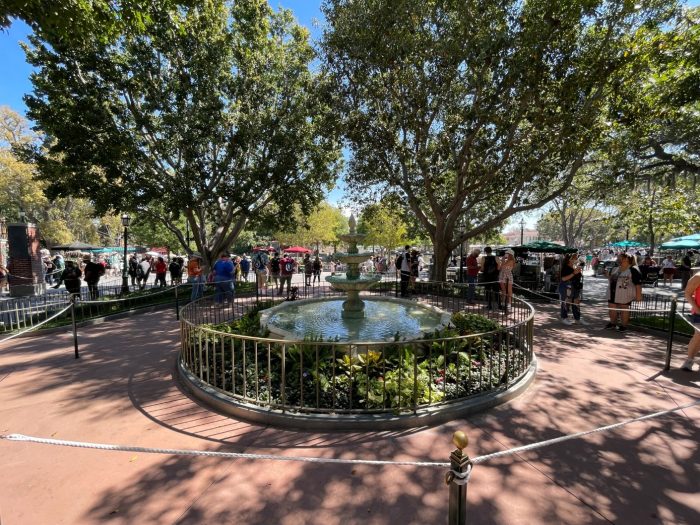 Rise of the Resistance Boarding Group

There’s been a change to the Rise of the Resistance boarding group process. Previously, you’d have one shot each morning after the park opens. Now you have two chances, one at 7:00 a.m., and another at 12:00 p.m. For the 7:00 a.m. opportunity, you can try for a boarding group no matter where you are located. You do not need to be in the park; all you need it a valid ticket and park reservation. Remember that to get a reservation in the 7:00 a.m. group you must have a valid reservation for Disneyland. If you have a park hopper with Disney California Adventure as your starting park, your only opportunity to obtain a boarding group will be at 12:00 p.m. 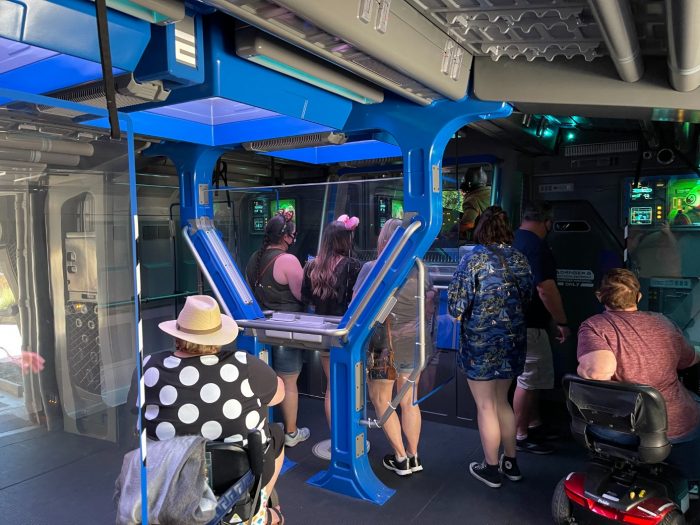 Before I wrap this up I wanted to mention the food ordering process. Most of the quick service locations in the park have had cash registers removed in favor or ordering via mobile ordering. We highly recommend you set up an account and credit card on the official Disneyland app before you arrive at the park. For now it appears that mobile ordering will be the quickest way to get food when you’re visiting Disneyland and DCA. 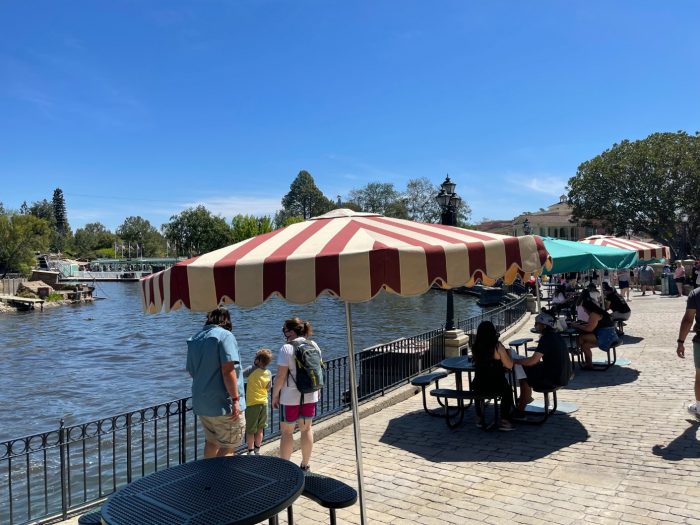 Drinking and dining can only be done in designated areas. Thankfully Disney has added additional dining areas in the park. These tables have been placed along the Rivers of America.

There’s no up close and personal meet and greets with Disney characters available at either park, but they do appear for selfies and other photo opportunities. Here’s Miguel in Frontierland. 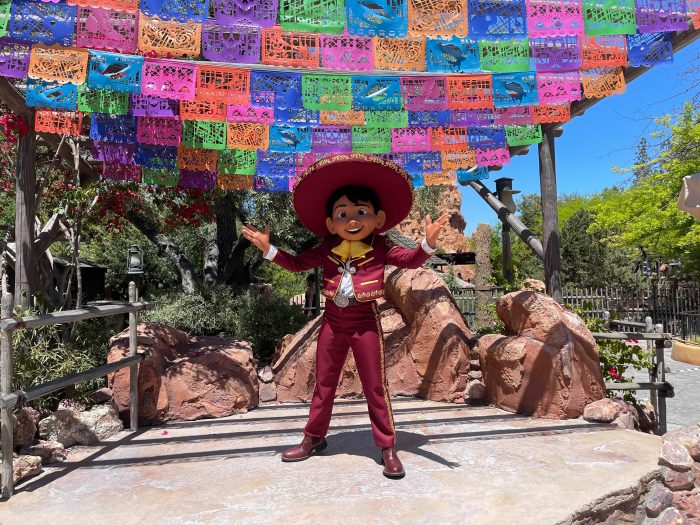 That’s it for now. If you have any questions about Disneyland’s reopening let me know in the comments below.

6 thoughts on “Here’s What We Found at Disneyland’s Reopening!”