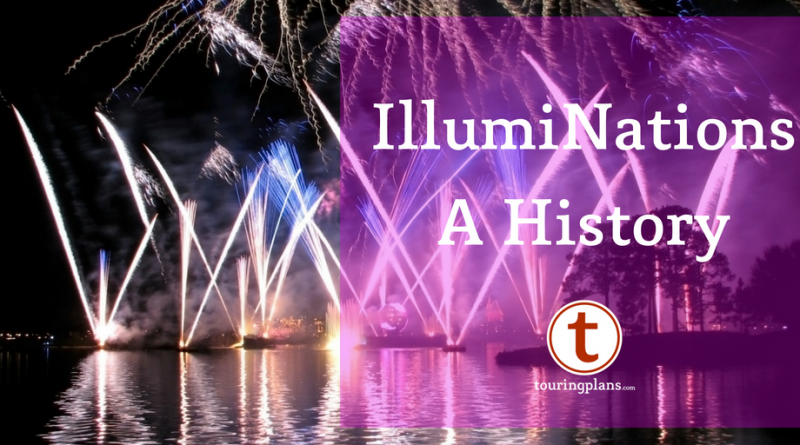 Arguably, no one does nighttime spectacles better than Disney. IllumiNations: Reflections of Earth, Epcot’s nighttime show for nearly two decades, has been providing plenty of oohs and aahs almost every night during its successful run.

The story of IllumiNations actually begins with Laserphonic Fantasy in 1984. Although EPCOT Center previously had other nighttime shows (Carnival de Lumiere and A New World Fantasy, which used projection barges for a show only able to be viewed from Canada through Mexico), Laserphonic Fantasy was a setup that would seem very familiar compared with the show today. A central area in World Showcase Lagoon would set off large amounts of fireworks, along with laser effects (using a new technology of projecting lasers on a water screen) that acted as snapshots of images from Epcot. The musical score was what you would expect from the 1980s—heavily synthesizer versions of international-inspired music, including the show-stopping finale of the 1812 Overture. (For a trip down memory lane, check out a Laserphonic Fantasy video from Martins Videos here.)

A new show with a new name, IllumiNations, debuted in 1996 for the 25th anniversary of Walt Disney World as Illuminations 25. Each country was introduced as the country was… well, illuminated, and then a show of fireworks lit up the center of World Showcase Lagoon. Music inspired from around the world played along with laser and water effects (and of course, more fireworks). A second act also included music inspired by Future World themes (such as Life, Land, Seas, Energy, Motion, Communication, Innovention, and Imagination). The whole show concluded with a jazzy rendition of Circle of Life. By today’s standards, the show was fairly primitive in terms of effects—the creepy laser floating baby head would be memorable today but for entirely the wrong reasons—however, it was still worth a view to cap off your night.

By the summer of 1997, IllumiNations 25 was transformed into IllumiNations, which actually a return to international classical music, although a different selection of songs from Laserphonic Fantasy.

It isn’t every day that there’s a dawn of a new millennium, and Epcot put a lot into celebrating the turning of the calendar to the year 2000. With the big draw of the Millennium Village, the Tapestry of Nations parade, and more, a new nighttime show was needed that would amaze park goers and be worthy of such a momentous occasion. Hans Zimmer, composer of the score for The Lion King, was asked to create a memorable musical theme for the show. Due to other commitments, Zimmer recommended his colleague Gavin Greenaway to take the lead in composing IllumiNations: Reflections of Earth. (Greenaway also composed the soundtrack for Tapestry of Nations, giving the two Millennium Celebration cornerstones a similar feel.)

On October 1, 1999, as part of the Millennium Celebration, IllumiNations: Reflections of Earth debuted. New features were added to this show—gone are the 80s-style laser creations on water screens. What the show needed was more pyro, both in terms of fire and fireworks. Torches were added around World Showcase Lagoon—nineteen in all, each representing the centuries leading up to the new millennium. (The twentieth torch is located inside the Earth Globe and is lit as part of the show. The twenty-first century is represented by 1,000 white fireworks flares at the end of the show.) Also added was the Inferno Barge, which prominently appears in the first act of the show—Chaos.

Quite possibly the most impressive addition to the show was the giant Earth Globe. The globe makes its appearance in the second act of the show—Order—and features images of people, places, and innovations in our world today. The Earth Globe is 28 feet in diameter and covered in more than 15,000 LED clusters, which display the almost 300 images during the segment. The show picks up speed with more fireworks fired in time with the show’s score and a “fake out” ending that usually has the audience applauding wildly.

The final act—Meaning—begins with the song “We Go On”, sung by country star Kellie Coffey. The Earth Globe opens up like a blooming flower to reveal the final torch which sends the 1,000 shells representing the new millennium into the skies, coupled with a window-rattling final burst of fireworks. IllumiNations: Reflections of Earth has been a mainstay of evenings at Epcot for nearly two decades. The show is performed nightly, rain or shine, with only minor changes throughout the years. During the summer of 2008, the Earth Globe underwent refurbishment and so a shortened version of IllumiNations was run during that time. On September 19, 2005, a firework exploded in a mortar tube on the Inferno Barge. No one was harmed, however the Inferno Barge itself took decent damage and was put out of commission until February of 2006. By the numbers, 750 mortar tubes are used for the show, with a combination of shells launched by compressed air and conventional shells. In all, more than 2,000 visible effects can be seen put into action from the 34 locations around the lagoon, including dedicated barges and on-shore launchers. (Kids, that’s why you need to stay behind the fence!) Although laser effects do not play as prominent of a part in the show as the 1980s shows, they do make an appearance in IllumiNations: Reflections of Earth. In late 2014, the laser systems were switched to solid-state lasers from ion lasers, which saves water consumption (because the lasers don’t need a water cooling system) and 64,000 watts of power per show. Because of FAA concerns, the technicians in the control center in the Mexico pavilion call Orlando International Airport every night just prior to the show to let air traffic controllers give a head’s up to pilots in the air at the time.

The operating cost per show is reported to be $25,000. (Isn’t it great to be able to buy fireworks in bulk?) The Inferno Barge burns through 400 gallons of propane every night. If there’s any propane left in the tanks at the end of the show, a final burn off is done late in the evening before the barge is moved back to its home location. For the original IllumiNations: Reflections of Earth, special fireworks were created with the colors Lagoon Blue, Lavender, Mint, and Pumpkin. Due to a change in vendors, these have now been replaced with more standard colors of Yellow, Magenta, Green, and Orange.

The four fountain barges pump approximately 4,000 gallons of water per minute from 40 nozzles.

The show itself is run by more than 65 computers in 40 different locations—it truly is a team effort to make this show go on in what appears to be an effortless act every night.

Regular visitors to Walt Disney World also know that special versions of Illuminations are real crowd-pleasers. The Holiday Tag celebrates Peace on Earth by blowing up tremendous amounts of shells and making it anything but peaceful on earth. But by far, nothing beats the July 4th and New Year’s Eve versions in terms of pyrotechnics. Seriously, you may need to get your fillings reset after a viewing of either of those shows. There have also been special versions for various milestone anniversary celebrations of Epcot. IllumiNations: Reflections of Earth has been well received by the public and critics alike, winning Best Outdoor Night Production Show by Amusement Today’s Golden Ticket Awards for eleven years in a row. The show still impresses newcomers and regular guests alike as a favorite nighttime show at Walt Disney World. Disney has just announced that IllumiNations will be concluding its lengthy run in 2019, to be replaced by a new show (which has not been officially named yet, although a couple names are priming the pump in the rumor mill). This new show will feature updated technology, but hopefully keep the same wow factor that has been a mainstay of IllumiNations all these years.

What are your thoughts on IllumiNations: Reflections of Earth? Are you excited for a new replacement? Let us know in the comments.

2 thoughts on “History of IllumiNations: Reflections of Earth”