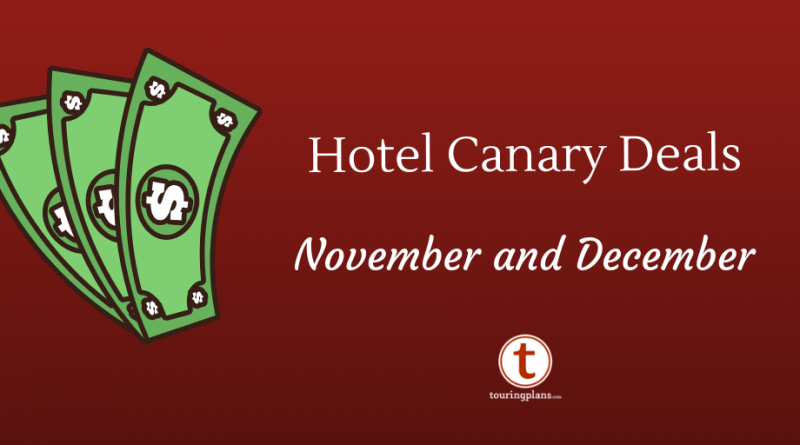 Last week you may have seen Len Testa tweet out some info about using the Hotel Canary extension to find Priceline Express deals. When interest in the topic was evident, James Rosemergy followed up on the TouringPlans blog with a nice tutorial on how to use the extension.

Len has asked if I’d like to post any good Priceline Express deals to the blog as they appear. That sounded pretty neat to me, so here is my inaugural bloggishness.

First, I’d like to give you a very quick rundown of what I’ve been doing in relation to the topic. Follow me back to the sunny days of summer, in August of 2017.

Back then I read reports of people finding surprisingly good deals for Disney resorts on Priceline Express. In July of this year I started hearing about Port Orleans French Quarter deals showing up.

I finally said to myself, “Self, I wonder how often these deals show up? And what times of the year?”
Then the barista blinked at me and asked me again what I’d like to order.

Anyway, I started a pet project where I began to record when Priceline Express deals appeared. To try to make it more useful, I also recorded how many days prior to the deal they appeared on the site as well as the day of the week. As you can imagine, that quickly became a lot of work so I limited the days I was checking to a sample of weekdays and weekends, usually going out 90 days or more into the future. When interesting deals appear, I’ll often check all of the dates in that period to see if I can determine the extent of the rooms available on Express deals.

A run of nice deals for Art of Animation, some All Star resorts, Pop Century, and the Cabins at Fort Wilderness lasted from August into in early October. Then things dried up.

My semi-educated guess was that would be the last we’d see of Express deals for Disney resorts until the holidays passed.

Happily for you, I was quite wrong.

Over the last week a nice fresh batch of resorts appeared on Priceline Express: All Star Sports, Coronado Springs Resort, and…. wait for it… Animal Kingdom Lodge! You’re going to like the prices, and I was surprised to see them running around and through both Thanksgiving and Christmas.

See below for some charts of these upcoming deals with dates and prices. These deals come and go, sometimes quickly, so what you see out there can change from day to day. I noticed today that a few days of Animal Kingdom Lodge rooms were added since I recorded things a few days ago.

Just remember kids, with some time and effort you can determine the Disney resorts in Express deals with fairly high confidence. But, please keep in mind nothing in this world is guaranteed, so caveat emptor. Also: buyer beware.

Another important point: Priceline deals technically guarantee room for 2 adults. However, since the vast majority of Disney rooms are built for at least 4 people, it is much less likely to be a problem there. (People have reported they just add children to the reservation after the initial booking.)

I’ll be keeping up with these deals and posting good ones here as they appear, so keep watching! (We’re including some later dates in October for reference purposes as well so you can see how low these deals can go.) TouringPlans is happy to welcome John to the site. Got questions? See any deals that you’d like to take advantage of? (Animal Kingdom Lodge on Christmas Day, anyone?) Let us know in the comments.