Update: The day after we posted this, I noticed that Hotwire dropped additional Coronado Springs deals all the way from April 9th to the end of the month! I have updated some references and the calendar in the post. Go get ’em!

Good news deal seekers! Hotwire has released its April deals for Disney resorts a little bit earlier this time around. This month you can find Coronado Springs for $130 to $155 per night for most days. Yacht Club jumps in at $273 for a few days nearer the end of the month, but the real star of this drop is Pop Century.

The Pop Drop has some gap days in the middle of the month, but you can find it going for $87 to $124 per night throughout.

Before we get into the Calendar of Deals (Everyone’s a Winner!), I’d like to start off with some Hotwire tips and some other good deals for this Fall.

Contemporary Deals in the Fall

If you are a fan of the Contemporary’s Bay Lake Tower, Magical Vacations Travel has some terrific deals on many dates from October through December.

I’ve compared a sample date for each room type to Disney’s current pricing – I’d have to say that saving $316 per night for a Theme Park View is pretty impressive.

Beware: The 10% Off Hidden Deal

I don’t want to harp on this first tip – but, actually I do, because it keeps happening and I don’t anyone to get enticed into a less than dealy-deal. If you search for Hotwire deals in April, you will likely see some random Caribbean Beach hidden deals in the results. These will all be 10% or 11% off deals – when Disney has regular or annual pass discounts out, they tend to be equal to or better these 10% off hidden deals after you factor in all taxes and fees. 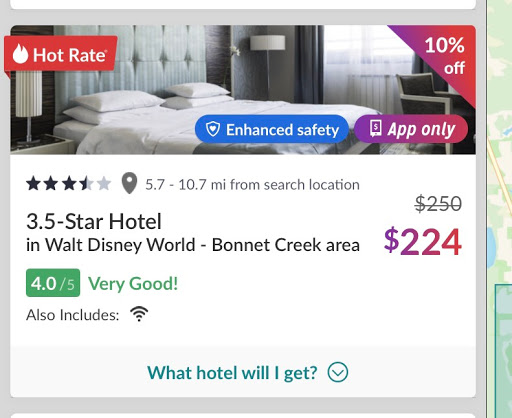 In fact, you’ll notice in the Calendar of Deals later on that there is a random $185 Coronado Springs deal out there on April 18 – that is also a 10% off deal you may want to avoid. (The Coronado deals earlier in the month are all 37% off deals.)

The Takeway: Lookup Disney’s pricing for your dates and ADTM: Always Do The Math.

Both Priceline Express and Hotwire like to try to push you over the edge with hints that can be less than accurate. One of their favorites is a little box on the deal listing or booking page that tells you the last person who booked got some specific resort.

I hadn’t analyzed them in as much detail on Hotwire, but suspected their “last person got” hints were also, err…. suspect. This week on the app, my suspicions were confirmed. Take a look at this example at right.

This deal is for a 3-star, 4.2-guest rated resort in Bonnet Creek. The hint at the bottom suggests the last person got Disney’s Pop Century resort.

The problem is, Pop Century is a 4.4-guest rated resort! The only two 4.2-guest resorts right now are All-Star Movies and Music. (And, only Movies is opening up soon.)

Takeaway: I suggest you ignore those hints and use the usual comparison techniques: star and guest ratings, location, and for tie-breakers, compare sub-guest ratings (there are usually 4 of them somewhere on the listing). For extra credit, watch out for mandatory resort fees. Disney resorts do NOT have them.

Draw Your Way to Enlightenment

We’ve mentioned this in the past, but is worth another shout out. If you are trying to figure out what resort a hidden deal is, you can often scroll down in the search results and find that resort in a non-hidden deal. If you compare the full price to the one that is struck out on the hidden deal, it will usually be within a $1. That, and comparing the ratings and review counts will often give the whole shebang away to you.

But, sometimes there isn’t a non-hidden deal in the results to compare to. Enter the Draw feature of the Hotwire app! You can use it to draw a circle somewhere and the app will filter to show you just the deals that reside within it. 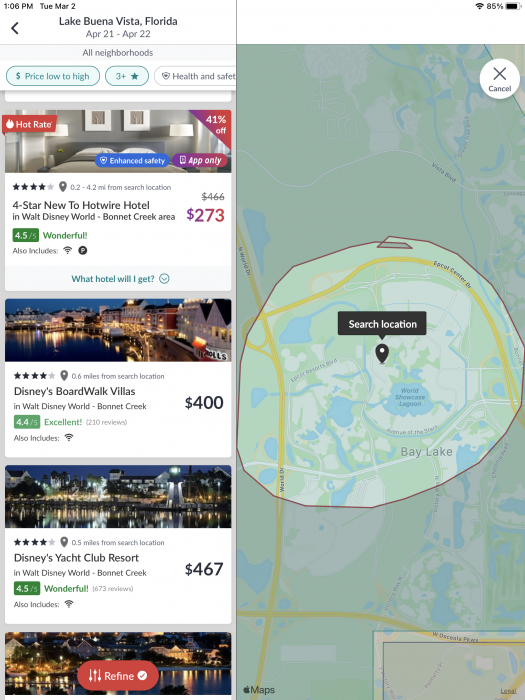 If you suspect a hidden deal is, say, for Yacht Club, you can click the Draw button, zoom into the general area of that resort on the map, and draw a circle. You can see in the example above, I drew a fairly large circle around most of the Epcot area resorts. Had I made a tighter circle just around Yacht Club, only those two 4.5-guest rated deals would have appeared and confirmed my resort guess.

On To the Deals!

That is likely enough imparted knowledge for today, so let’s move on to the April deals. Below are some examples of what Pop Century, Coronado Springs, and Yacht Club will look like in hidden and non-hidden deals.

Below, below that is the always welcome *echo-y voice* Calendar of Deals. 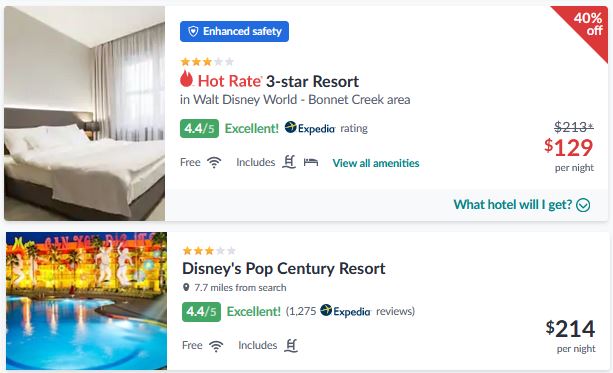 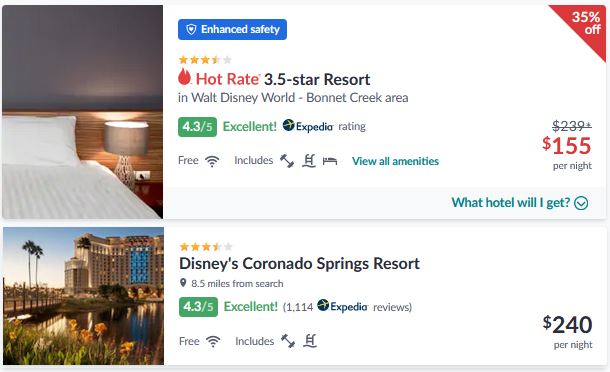 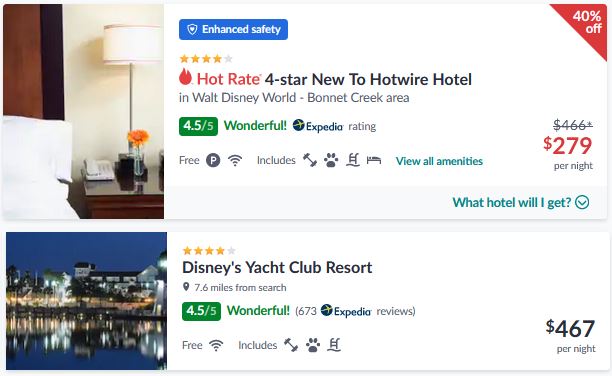 For your viewing pleasure, I’ve compared a few select days of Disney’s current pricing to these HotRate deals. 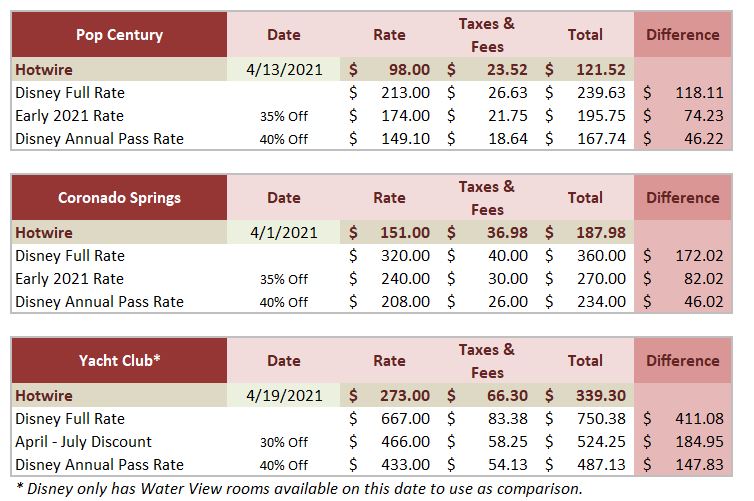 If you’ve booked any of these Pop Drops, or just have questions or comments about all the knowledge dropped in this post, please let us know in the comments!

20 thoughts on “Hotwire Deals for April: Another Pop Drop”