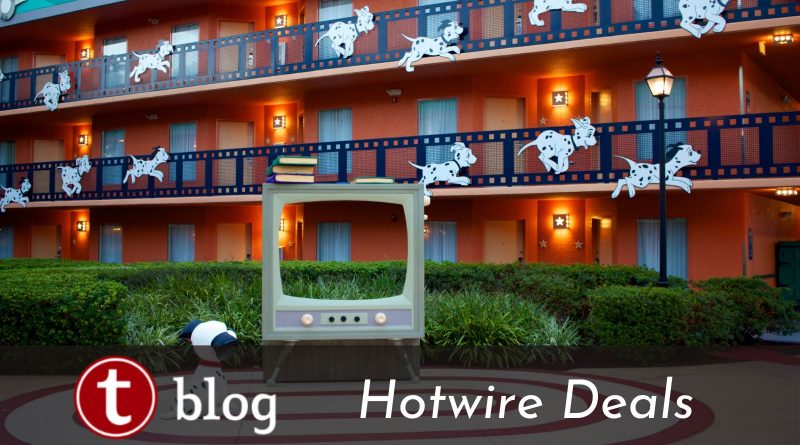 Wouldn’t you know it, having finally un-carpalled my tunnels after all of the keyboard gymnastics I went through for Hotwire’s April Bonanza drop – now we’re back at it!

As I searched I also began to notice that other changes were afoot as deals seemed to come and go – and eventually all of the Disney resorts went *poof* for a time and disappeared from Hotwire entirely, including the precious Movies deals.

After a moment of silence, I went on with my day and happily later found the Disney resorts had returned to Hotwire again.

In general, there seem to be a fair number of changes to the April and May deals, but ones later in the year appear the same as before. You may notice prices shifting around a little if you check often enough, but only a few changes I’ve seen have been very dramatic.

We’ll include the usual Calendar of Deals below for reference – but once again want to point out that with deals running all the way to the end of 2021, there will be many others out there we haven’t listed here. So, let’s start with a few tips to help you learn some of the latest ins and outs of Hotwire.

If you’re new around Priceline and Hotwire, you might want to refer to some of my previous posts for various tips on identifying resorts and doing #vacationmath.

You know what they say: Teach a man to fish and he won’t have to go down to Cooke’s of Dublin to get fish and chips and a Guinness and WAIT is that better? I don’t think so. Forget all that.

If you use the Hotwire app on your devices (as opposed to visiting the site in a web browser), you’ll likely notice there are deals marked as “app-only .” And they ain’t kidding – many of the Disney resort deals we’re finding are only showing up in the app. Also, I ran a little test this week by checking a sample of dates with a desktop browser as well as the Android and iPad apps. Oddly enough, I found that even between the two apps you may see different deals show up on one and not the other. So, if you have access to a couple of devices, it might be worth checking each for your dates and see if anything good turns up.

Jumping over to Priceline Express for a minute: lately the deals over there are few and far between for Disney resorts.  When you do find something you believe is a Disney resort over there, you may want to visit Disney’s own page listing all of the currently open resorts, because Priceline has a bad habit of posting deals for resorts that are currently closed! 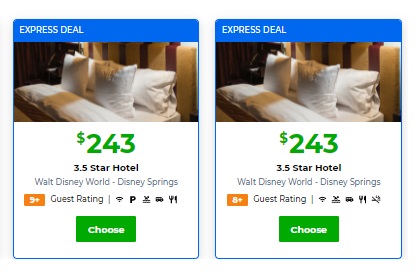 For example, last week I kept seeing $243 deals for a pair of 3.5-star resorts in Disney Springs – one of them with a 9-guest rating. The only resort with that rating is Port Orleans French Quarter – which is decidedly not open and has no opening date set.

So, of course when I mentioned these deals to Len Testa, his first response was “Let’s book them and see what happens!”

He tried, but sadly it was not meant to be.

On a similar note, I also found some Art of Animation deals that did seem active, but interspersed were ones where the crossed-out full price on the hidden deal matched a Suite deal at the resort. (They were not bookable either.) So, I guess my warning is: I wouldn’t worry about these ghost deals on Priceline – if the resort is not open I don’t think the non-refundable part of the deal would hold up. But, don’t get discouraged or confused if you see them – just do your homework, note the star and guest ratings and the location to help identify the resort, and then head over to check the Disney site.

Take a Look At Your Windows

Perhaps the most useful tip I’ve found lately is that Hotwire now mimics Priceline in one respect: it offers different hidden deals based on the window of dates you select, and may even rely on a particular starting date for some to show at all. Also, the window you select may influence the price you are given – and not in the manner I expected.

To refer to Priceline Express for the third time, their pricing is fairly simple: Say you you checked for deals on two consecutive days and see a deal for Pop Century each day. Let’s say the first day is $100 and the second is $120. If you booked both days in a single reservation, the Priceline rate will end up being the simple average of the two, so $110.

That doesn’t seem to be the case on Hotwire. For example, while checking day by day for those wonderful $67 All-Star Movies deals, I noticed they only showed up on Mondays in May. The deals on the days surrounding them were often priced significantly higher at $97 or more. But, if you searched for a group of days, you aren’t necessarily presented with an average of those prices.

In this table the white rows are the HotRates I found when searching each day individually. The red rows are multiple day searches. Notice the rate I was given for the first 2 days together was essentially the second day’s rate, but when I searched for all 3 days together the rate dropped back down to the awesome $67 rate!

You can see a similar example (but less dramatic savings) with these Coronado Springs deals.  Individually, each day is $130, but when you book the multiple day windows shown in the red rows, the price per night drops. Odd, but true.

My takeaway for this tip is an oldie but a goodie: If your vacation dates are flexible, it is often worth checking various start and end dates to see if you can save even more money with hidden deals.

This tip is similar to the previous one, but with a slight twist.

I know from experience that people love their Yacht Club deals. There have been some good runs of them in the recent past and people tend to get pretty excited about them. Sadly, Yacht Club has been appearing less often lately. While researching this post, I was happy to find some deals for the resort in the upcoming weeks – but they are particularly ghosty and have come and gone several times now. As you will see in the calendars below, Yacht Club was showing up with a rate in the $300s in the middle of April. (You may see them now, you may not – all I can say is keep checking if you are interested.)

After they disappeared for the second time, I happened to find that I was able to make them re-appear with this little trick: if you were lucky enough to want to start your trip on April 17th, you could get Yacht Club to show up at by searching with that starting date and ending on either 23rd or 24th – and at a pretty nice discount.

If you don’t recall from previous posts, you can identify Yacht Club by looking for a 4-star, 4.5-guest hotel in Bonnet Creek that will say “New to Hotwire Hotel.”

While there are a few resorts with that same rating and location, these deals are very likely Yacht Club due to reasons.

If you are not sold on my assessment – you can use the Draw function in the Hotwire apps and draw a circle around the resort on the map to see if the deal you are looking at is in that area.

Okay, on to the Calendars! 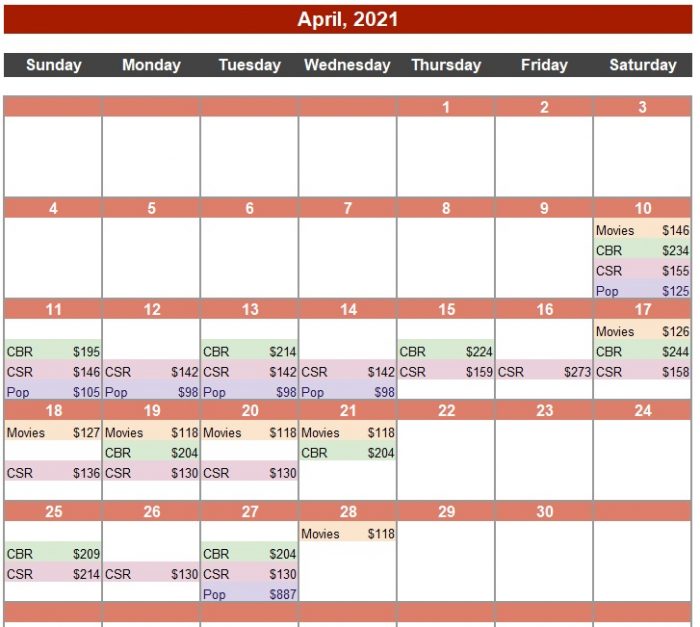 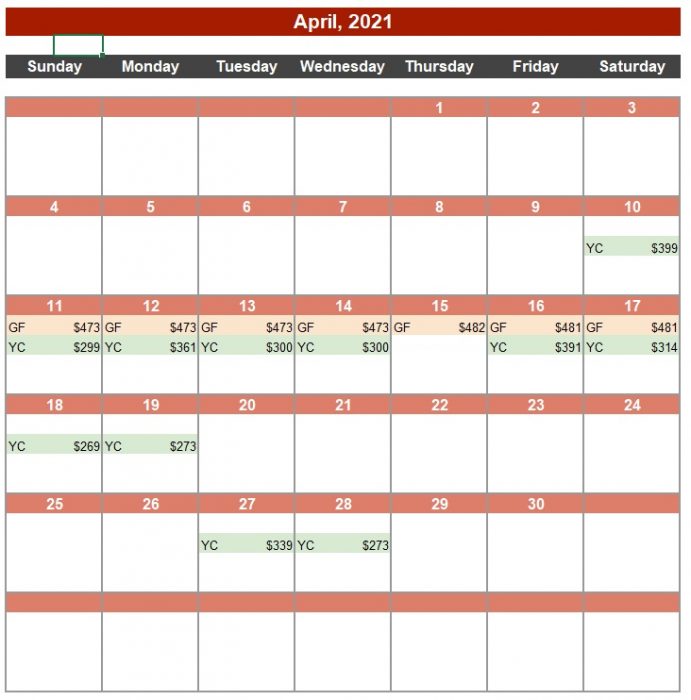 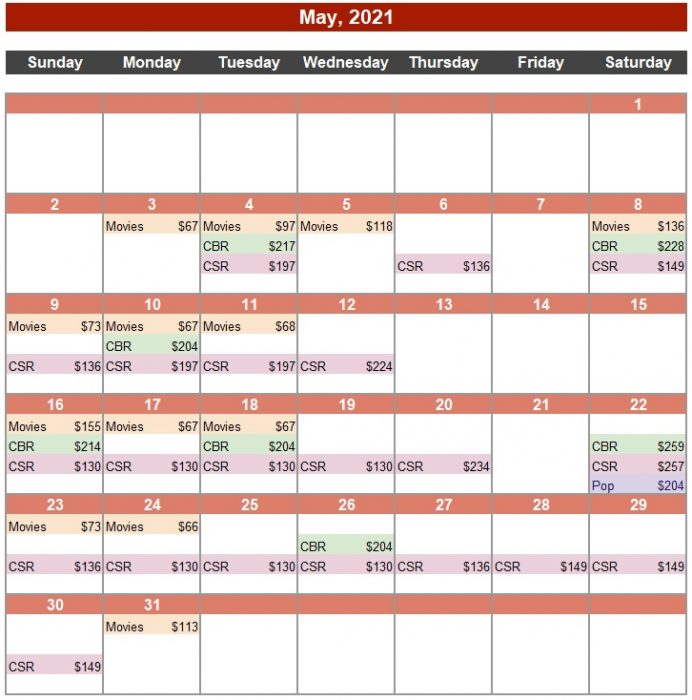 A Final Deal for You

If one of your life goals is to stay at the Waldorf Astoria – you may want to go out and check some dates in mid July. I spotted it one week for about the same price as the Coronado Springs hidden deal! Pretty nice for a 5-star resort.

If you’ve booked any of these deals, or just like saying the name “Waldorf” like I do, let us know in the comments!