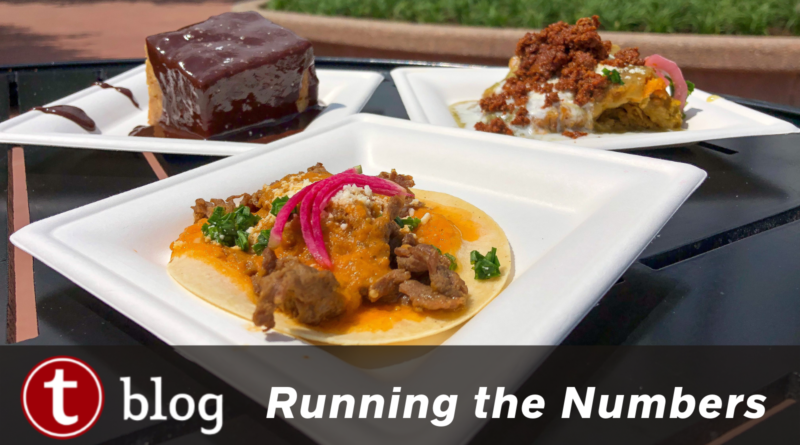 I have only been to the EPCOT Food & Wine Festival once.  As a parent we were locked into school-year schedules, so it wasn’t until my daughter was a senior that we took a long weekend in honor of our last year as a living-together family and spent it tackling Food & Wine.  With a group of five, we left one person to stake down a table and dispersed the others to nearby booths with instructions to come back with “one of everything”.  When the food was secured we passed it around, everyone tasted and then, like locusts, we moved on to the next set of booths. We were a machine. 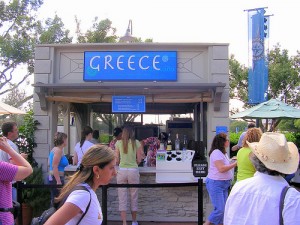 For four days we ate, drank, and were merry, tapping our MagicBands with nary a thought for how we would eventually pay the piper — until Monday morning when we checked out and received the truly eye-popping bill. I was really glad that I had saved for this trip in advance and come with my food budget pre-loaded onto Disney gift cards.

Would you like to know how much you should budget for the 2021 Festival? Whether you’ve never been, haven’t been for several years, or went every year before COVID but always used Dining Plan credits, this series is for you.  In part one, we’ll cover big picture statistics and typical approaches such as choosing just a few booths and getting all the dishes.  In part two, we’ll do a deeper dive into how costs are affected by personal preferences such as if you are a vegetarian (dishes tend to be cheaper) or a meat-lover (dishes tend to be more expensive).

One common way to tackle the festival is to pick out a few booths that appeal to you and get all of the items from each booth. This can be an especially good strategy if lines are long, as you get more food for each minute of line-waiting.   I’m going to start my analysis with this method — partly because it’s popular, and partly because it makes for an easy example of how we’re estimating and why we’re doing it that way.

Suppose I tell you that the average price of a pair of socks is $2, and the maximum price of a pair of socks is $11. (I’m going somewhere with this, I promise.)  If I asked you how much you might pay for two pairs of socks, you would just multiply those numbers by two and tell me that the average is $4 and the maximum is $22.  This is a comfortable, familiar way to work with statistics, but we can’t use it here.  Take a look at the chart below, which plots the total cost of each booth’s dishes.

You’ll pay $36 to sample all of Italy’s dishes; it’s the max by a good margin.  But just taking twice 36 to get $72 as the maximum you would spend to eat at two booths doesn’t work because most people don’t want to eat everything in Italy twice! Their goal is to try different things, so they will move on and choose another (cheaper) booth.

It seems that the problem of estimating costs here is more like those sock problems we had in high school where there were four green socks, six red socks, and eight blue socks in the drawer, and we had to figure out how likely we were to wear mismatched socks if we picked in the dark.  For a small number of socks we can just do a direct calculation, but it turns out that when working with larger numbers — like 22 booths or 77 dishes — the best approach is to simulate. We’ll pretend to be visitors and randomly pick some booths to eat at (a trial), and do a very large number of trials so that we make sure to get good estimates. This method of sampling the booths won’t be very tasty but it should give us a good idea how much it will cost.

In the chart above, the “# of booths” column is how many booths we pretended to try.  Each row represents a different set of trials, just for that number of booths.  The Min, Max, and Mean (average) columns are based on observation, but they should be quite accurate after 100,000 trials.  For example, the observed mean for trying a single booth ($19.19) is off from the mean calculated in the traditional way by just 4 cents!  The columns labeled “middle 50%” and “middle 80%” are based on percentiles; you can use these to estimate your costs to within about $20.

Depending on how you eat, you might want to use a slightly modified sampling to get a good estimate.  The chart above gives you a chance of stopping at booths that serve nothing but dessert, but if you’re only going to three or four booths then hitting even one all-dessert stop on top of the desserts you’d be picking up at other booths could be a lot of sweets.  If that’s no problem for you then feel free to work from the chart above.  But if that doesn’t sound like your style, the chart below goes up to 7 booths and reduces the possibility of dessert overload.

The Snack and Stroll Method

The Snack and Stroll approach is exactly what it sounds like.  You stroll around the World Showcase, and when you see someone with something that looks good, or a menu board appeals to you, you eat.  Selections here are not affected as much by the cost of other dishes at a booth, so the best estimate will come from looking at the price for a set number of dishes.

When I was first thinking about writing this article, I wanted to figure out the average # of dishes per person and then present the results based on the number of people in your family.  Within our team there was pretty tight agreement on 4 dishes per person, with about 25% desserts.  But, you know, TouringPlans bloggers is a pretty small sample size, so we took a Twitter poll.

If you were going to EPCOT's Food and Wine Festival solo, how many dishes do you think you'd try in a day? #TasteEPCOT

That … was not as helpful as I might have hoped. I’m not sure who those 7+ people are (looking back at our conquering crusade of 2018 I’m afraid some of them might be me), but there are definitely enough to warrant consideration.  So I decided instead to just present the results based on total # of items, and leave it to you to figure out how much each person in your family is going to eat.

As with the booths, you might like to see the desserts broken out separately — not only do appetites for dessert vary, but the cost distribution is pretty skewed as well.  The median price of a non-dessert dish is $6.25, but the median price for a dessert is $4.75, more than a dollar less.  Here are estimates that exclude desserts:

Of course, most of us will still want to eat some dessert.  Out of 18 desserts, 15 dishes are between $4 and $5.50, and then there are three massive outliers at $9.50, $11, and $16.  The chart on the right below excludes the Funnel Cake, the Bombolini, and the Donut Box Sampler, yielding ranges narrow enough that you can just add non-dessert estimates and dessert estimates together if you choose.

What to Take Away:

Warning: the responsibility for correctly estimating how much you and your family will eat lies with you!

If you aren’t an average visitor (or if you’re just curious), tune in tomorrow when we run the numbers for vegetarians, meat aficionados, and picky eaters.

What’s your method for conquering Food & Wine?  Do you usually budget in advance?  Let us know in the comments!