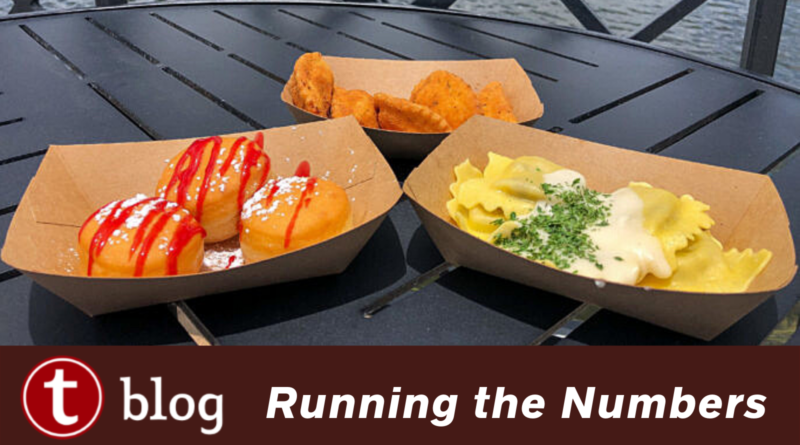 Welcome back!  Yesterday we virtually sampled all the currently available dishes from this year’s Food & Wine to give you overall estimates for cost. Those estimates assumed an equal likelihood of picking each dish no matter what was in it, but it’s not uncommon for people to have food preferences that could bias the selections. Today we’ll break it down to show how selecting based on your personal taste can change your bill.  We’ll use the same methods as yesterday, but we’ll slice and dice dishes into taste-based subgroups before calculating.

To look at any particular taste preference, I first had to go through the list of dishes and decide whether each one was in or out. The tricky part here is that there is some subjectivity involved: this is true even for the most banal of categories such as desserts.  There will be near-universal agreement that Apple Crumble Tart is a dessert, but what about Apple Chips? I eventually decided that Apple Chips are not dessert, but you can see how these questions sneak in even on what you might think are really cut and dried decisions. 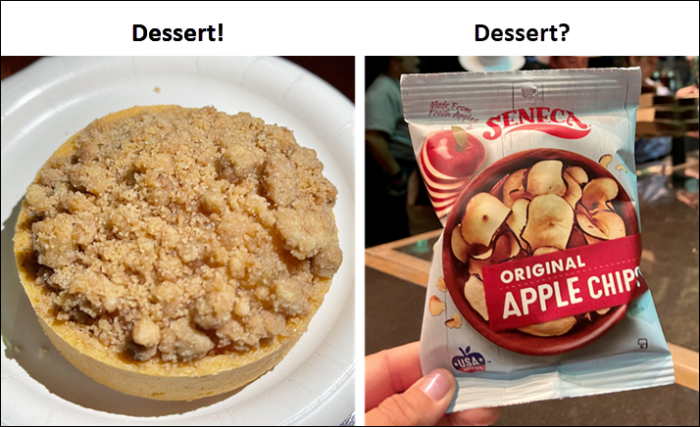 For each group, I’ve included a description of how the dishes were selected into that set. Let this be your guide to understanding the category and don’t worry too much about whether some subjectivity colors some of the choices. Including or excluding one or two dishes won’t produce any big changes in the estimates unless those dishes are huge outliers in price. No dishes that were tagged as desserts have been included in any of the groups below.

This group includes all dishes that do not obviously have meat in the images or description. If you are a strict vegetarian who won’t eat a dish if it is prepared with chicken broth or animal fats, then you may want to ask before ordering or limit yourself to the 6 dishes in this group that Disney has explicitly labeled as being Plant-Based.

Some of the columns in the chart below should be familiar from yesterday: Min, Max, and Mean are the minimum, maximum, and average values for the target number of dishes.  Middle 50% and Middle 80% are the middle ranges based on percentiles and can be used to estimate your cost.  The three new columns on the right are just for fun. The Mean and middle-50 columns here are the same as what was included in yesterday’s article for all non-dessert dishes, and the Shift column shows how much the ends of the ranges have changed.  For three dishes, the lower end of the range is $2.75 less when you consider only vegetarian dishes than it is when you consider all dishes.

Sticking to vegetables clearly saves a bit of money, although not enough to make this a secret cost-cutting strategy. You’ll need at least 8 dishes to see an average $5 savings compared to making unrestricted picks.

The vegetarian selections have two notable outliers in price; aside from the Mezzelune Croccanti (Italy, $12) and the Cheese Flatbread (Brew-Wing, $9.25), everything is between $4 and $6.  If you don’t plan to get either one of those dishes then you can get a better estimate than the ones above just by multiplying the number of dishes x $5. Using this method you’ll come out $5 ahead starting around 4 to 5 dishes, and $10-$15 ahead by 8 dishes.

This category is the exception that proves the rule when it comes to subjectivity; only dishes that Disney explicitly labeled as gluten-free were included here.

Gluten-free offerings run a little cheaper than the average, but not that much.  You’ll be ahead by about $5 somewhere around 9 dishes, but only if you’re picking from the higher end of the range.  The max savings will be under $10.

The Meat-Lovers category includes dishes where meat (not including seafood or fish) plays a highly visible role in the dish. It’s not enough for there to just be meat in the dish.  It has to be the star.

On the whole we might expect that meat-heavy dishes would find a higher price-point than dishes featuring no meat, and indeed that is what we do see: the median price of a vegetarian dish is $5.25, and the meat-lovers median of $7 is almost two dollars higher.

When comparing to the set of all dishes, we can see that the meat-lovers ranges are higher but not by much.  Even at 21 dishes, you’ll pay less than $10 extra if you’re mesmerized by the meat. One thing that’s interesting is that the low and high ends of the range don’t shift equally. The jump on the low end is easily explained by the fact that this set contains none of the cheaper vegetarian dishes. The lack of movement on the high end comes from the fact that the four highest-priced dishes of the Festival were also excluded; both dishes from Italy and the flatbread pizzas from Brew-Wing.

Here’s a fact from my lifetime of experience: outside of a tiny number of widely popular favorites, one picky-eater’s yuck is another picky-eater’s yum.  For kids (or adults) whose tastes are very narrow, there likely are dishes at Food & Wine that they’ll enjoy.  It’s just that they aren’t sufficiently well agreed-on for me to pick them out and put them in a group.

What is in this group is dishes that are about trust.  At Food & Wine sharing is caring; part of the fun is getting to taste each other’s dishes.  If you’ve got a picky eater, the dishes in this category offer familiar forms or flavors, such as Germany’s Schinkennudeln, or highly separable components: sauce that can be scraped off to expose a bare piece of meat or a well tolerated vegetable that can be picked out of the dish. Some of the flavors from seasoning might come along for the ride, but you’ll be able to get a forkful for your picky eater to try that might expand their palate, but won’t break their trust that you’re asking them to try a bite of something they might actually really like.

This set looks very similar to the meat-lovers on the low end of the ranges, and for the same reason: many inexpensive vegetarian dishes aren’t in this group.  In the meat-lovers set, though, the top ends were pretty stable because we had also removed some of the higher-priced dishes — not so here.  The four most expensive dishes are two from the Italy booth, and the flatbreads (pizzas) from Brew-Wing, and all of them are picky-friendly.  Retaining these dishes while removing 10 vegetable dishes from the cheap end is pushing all of the estimates up.

What to Take Away:

From that last point, an easy way to account for a mixed group is to use the estimates based on all dishes (published yesterday) and take the higher or lower end of the range, depending on the composition of your group.  For instance, a group of four with two meat-lovers and two with no preference should look at the middle-50 column; since the meat-lovers dishes tend to be more expensive they should use the high end of the range as their estimate.

How many dishes do you usually eat at Food & Wine? Do you think Apple Chips are a dessert? Is picky-friendliness the secret to Italy’s outlandish prices? Let us know in the comments!