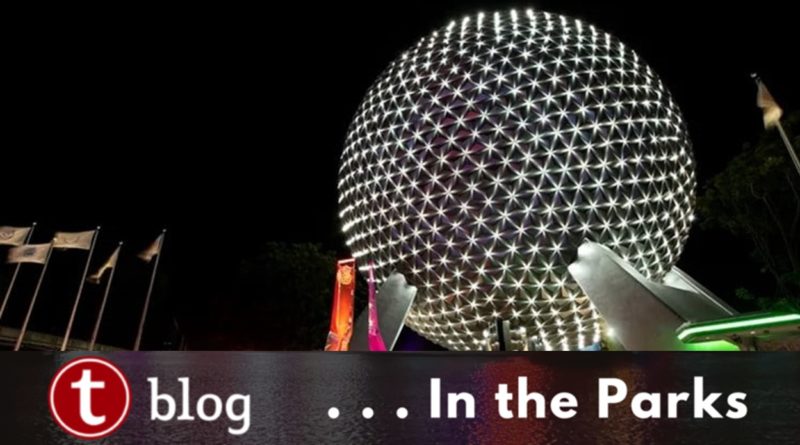 It’s been a while since I’ve talked about any in-parks testing that we’ve done. And on top of that, several of you have asked about any recent developments in Extended Evening Hours. Back when Chrissy originally tried them out, they were an absolute steal – the parks were total ghost towns and it was the best way to accomplish a lot of attractions with minimal waits.

Two birds, one stone. One of our favorite families of TouringPlans users had a mid-May Disney trip planned that included Extended Evening Hours at EPCOT and Magic Kingdom. And I conspired with them to come up with various strategies that they could test for us so that we could give you the best strategy for making the most of your extra two hours with low crowds.

Back when we first experienced EPCOT Extended Evening Hours, our plan was way too ambitious. We totally forgot about how spread out the big headliners are at EPCOT. In reality, almost a quarter of the 2 hours is necessarily eaten up by walking. So this time around we were much more realistic. We set up two plans, each of which had a maximum of 5 steps. Five attractions may not sound like much (and it certainly isn’t when you compare it to what you can accomplish at Magic Kingdom), but at EPCOT that lets you hit most headliners … with a lot of walking in between.

Team 1 had an attraction plan that started at Soarin’ and then led them around Future World (it’s so much easier to call it that) before finishing out the night in World Showcase with Frozen Ever After and Remy’s Ratatouille Adventure. Team 2 had the exact opposite plan. They would start at Remy and follow the “loop” in the opposite direction. The goal was to see which was a more efficient use of time – same attraction list, same amount of walking, just a different attraction order.

9:19 pm – Entered the line for Mission: SPACE (orange). The posted wait time was 10 minutes, and interestingly our team timed a 13 minute wait before their ride. They exited the pavilion at 9:40. A third of their time had already elapsed!

9:42 pm – Thankfully it was a quick walk to the next attraction, and they entered the line for Test Track. The posted wait at this point was still 30 minutes, and it was pretty close to true – the actual wait was a decent 28 minutes. Not the near-walk-on that we expected from our previous experience. They exited the pavilion at 10:18 pm, with only ~40 minutes to go in Extended Evening Hours, and with two major attractions and a lot of walking ahead of them to meet their goal.

10:23 pm – After an impressive bit of really fast walking, they entered the Frozen Ever After queue. Thankfully the posted wait of 30 minutes was totally incorrect this time, and the actual wait was only 6 minutes. By 10:37 they were exiting the pavilion and booking it toward France.

10:45 pm – With 15 minutes to spare, they made it into the Remy queue. For anyone that has done this walk before, 8 minutes from Frozen to Remy is crazy. That’s at least a jog. So, lest you think they could’ve fit one more attraction in that window, chances are good that anyone with mere human walking speed would’ve missed Remy at that point. Remy had a 30 minute posted wait at 10:45, and our team experience an actual wait of 28 minutes. That put them on the ride at 11:14 pm (14 minutes after Extended Evening Hours had technically ended), and outside in France at 11:20 pm.

9:01 pm – In line for Remy with a 60 (SIXTY!) minute posted wait. The line didn’t start moving until 9:12 pm, but then our team made it into their ride vehicle by 9:14 pm. So a 14 minute actual wait, including downtime. Side note here – by 9:30 pm, the actual waits we recorded jumped up to almost 40 minutes, and only decreased to about 30 minutes by the very end of the two hours.

9:36 pm – After a 16 minute walk around the lagoon (note: this is twice as long as the other team, thanks to lower walking speed and having to navigate post-Harmonious crowds), our team entered the queue at Frozen Ever After. The posted wait was 25 minutes, and the actual wait was … 25 minutes. No happy surprise there.

10:13 pm – Thanks to two decent waits and a lot of walking, with only ~45 minutes left in Extended Evening Hours, Team 2 made it to their third attraction, Test Track. Even this late in the evening it had an impressive 45 minute posted wait time, and the actual wait was 24 minutes.

At this point, Team Two (gasp) deviated from the plan (dun dun dun). Apparently Mission: SPACE at 10:45 pm didn’t sound as appealing as Soarin’. So off across the park they quickly marched.

10:51 pm – After a quick walk across Future World, our team was in line for their chosen last attraction of the evening. The posted wait time was 10 minutes, and thanks to theater cycles the actual wait was 12 minutes. But this is when a bit of Disney magic happened. You read that right. Even in the era of increased costs, magic still sometimes happens. A 12 minute wait and then a show cycle easily put them past the 11:00 pm closing time of Extended Evening Hours, but they were allowed to stay on the ride and experience a second flight without exiting or reloading.

With the help of Disney magic, both teams accomplished their 5 rides in 2 hours. Barely. Both experiences lasted quite a bit past 11:00 pm. Both teams should have walked 1.3 miles. Team One did, and Team Two managed to cut off a tiny amount of walking by skipping Mission: SPACE. Tsk tsk.

Team One spent 82 minutes in queues waiting for their attractions. Not nearly a blink-and-you’ll-miss-it deal like our last EPCOT test. Team Two managed to get by with just a 75 minute wait instead. Of course, without that Disney magic, that would’ve been 75 minutes for 4 attractions instead of 5.

Our results here were surprisingly close. I admittedly expected Team One to blow Team Two out of the water thanks to high World Showcase crowds at regular park closing.

The results may have been thrown off by one operational snafu. At around 8 pm, Remy had some sort of operational problem and went down. Something very similar actually happened when Chrissy ran her test too. Whether by coincidence or not, both times the ride stayed down until Evening Extra Hours began. Also in both cases, wait times were lowest right at the beginning of the two hours, and then increased and mostly stayed steady for the rest of the night.

This doesn’t always happen, though. When Remy is up in the evening and through the extra hours, wait times tend to stay more steady. Our Team Two benefited from the snafu. But so can you! If you pay attention to the tip board and see that Remy is down 30 minutes before extra hours begin, try to hop into line right as the park officially closes. Chances are that it will come back up and you’ll be rewarded with a quick wait.

Otherwise, for now (Guardians coming online will, of course, change things), your best bet is to start the extra hours at Soarin’ and then to wrap back around to World Showcase near the end of your night.

The big story here is that time savings and near-walk-ons during Extended Evening Hours have effectively disappeared. And not just during this test – when I pull the data from the past month of EEH, it’s regularly the same. In fact, the night that our teams were testing was actually a _good_ result compared to the past month. Let’s compare some scenarios:

Of all four strategies, doing Early Entry is actually the best bet here. A more relaxed pace, and less time waiting than any other option. After that, it’s a toss-up between springing for Genie+ and stacking for the evening or doing a fast-paced Extended Evening Hour.

The Becky recommendation? (And what I’ll legitimately be doing with my family in late July …) If at all possible, stay somewhere where you can Skyliner to EPCOT, or otherwise enter from International Gateway. Early entry rope-drop Remy, then make your way to Frozen Ever After before lines get crazy there. After that point, get yourself to Test Track and then explore the rest of Future World at your leisure. Mix in a Guardians of the Galaxy ILL or virtual queue slot in there if you’re lucky enough to nab one.