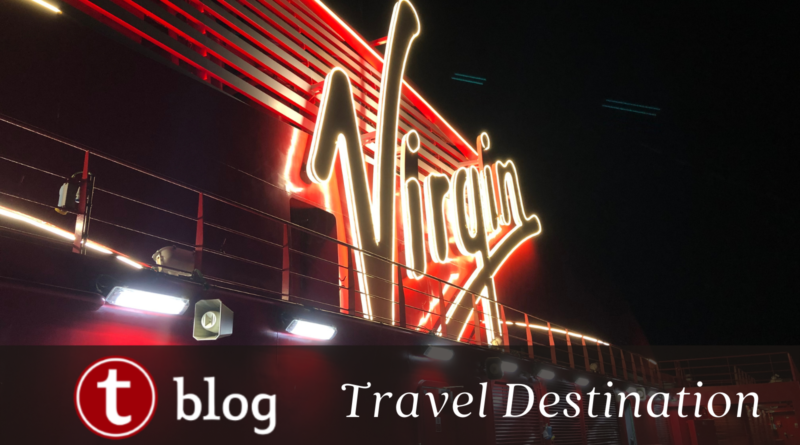 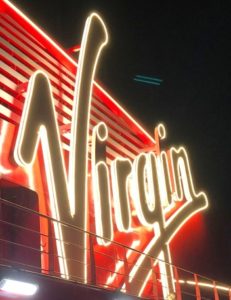 I just got back from Virgin Voyage’s first-ever U.S., cruise, on the Scarlet Lady out of Miami. Mine was a 4-night itinerary that included stops at Nassau and Bimini, plus a day at sea. This may have been the best cruise I’ve ever been on.  A large part of that is due to the passengers on board, who were uniformly laid back and welcoming. That and the ship’s beautiful, modern decor is enough for me to re-book on Virgin Voyages. And below is more detail about the things Virgin seems to be really good at, and the things they need to work on.

Here’s what Virgin Voyages does really well on Scarlet Lady:

I counted six formal restaurants on the ship, and more than a dozen small food stands. You’ll find more places to eat than you have time to eat at, which is a great problem to have. Most menus have explicit vegetarian and vegan options identified, too. Food quality ranged from above average to much above average – we didn’t have a bad dining experience anywhere on the ship.

It was easy to get day-of reservations for most restaurants while on board. But if you want to eat at a specific time at a specific restaurant, make those arrangements as soon as you can through the Virgin Voyages app.

Extra Virgin is Scarlet Lady’s Italian restaurant. Notable here is that the pasta is made in-house daily and cooked to order. I thought the spatchcocked chicken was delicious – a whole chicken, butterflied and roasted, with a generous amount of salt and rosemary. Gunbae is a Korean BBQ place on Deck 15. Dinner starts off here with a drinking game led by your service team. Like every Korean restaurant I’ve ever been to, you get tons of food cooked right in front of you. What’s different at Gunbae is that there’s a fixed menu for the evening, so you don’t have to choose what to get. The short ribs stood out among the meat and seafood options. One thing to note – because everything is cooked on a communal hot plate at the table; those with shellfish or other allergies will need to notify their service team in advance.

Test Kitchen is arguably the most interesting restaurant on the ship, combining small plates with a varied, technical approach to cooking. Pink Agave serves upscale Mexican food on Deck 5. I didn’t eat here, but our group did and thought the food was just okay. Pink Agave’s bar is fabulous. Razzle Dazzle is Scarlet Lady’s “vegetable forward” restaurant. We didn’t have time to eat here, but I heard good things about the desserts. The Wake seems to be the ship’s steak and seafood place. We heard good things all cruise long about The Wake’s dinner and brunch service. I was told repeatedly that the lamb was the best thing at dinner, and the eggs benedict was the thing to get at brunch.

Scarlet Lady doesn’t have a traditional cruise ship buffer. Rather, it has a series of small food stands set up around the ship, and a food hall called The Galley on Deck 15. The Galley has separate stations for sandwiches, tacos, noodle bowls, burgers, all-day breakfast foods, salads, bento boxes, and pastries. I like it a lot, especially Diner and Dash, which serves breakfast food and is open 24 hours. D&D’s standard menu includes eggs, potatoes, bacon, sausage, and all the usuals, plus baked beans and tomatoes for our U.K. friends.

Like dining, there are more entertainment options available to you on Scarlet Lady than you’ll have time to experience. Unlike other cruise lines, there are no huge theaters on Scarlet Lady – that space is used for smaller, more intimate venues. Those range in size from The Groupie, with three tiny rooms holding everything from surprise magic shows, to karaoke, to God knows what else. The Red Room, a two-story part-stage, part-dance floor, hosts UNTITLED DANCESHOWPARTYTHING, a (very) high-energy, audience-participation dance show. It was one of my trip’s highlights and I recommend it to everyone.

The Manor is the ship’s main dance club, with a live DJ and enough room to breakdance if you’re so inclined (we tried). It really gets going after 11 p.m. and is a lot of fun. The Manor’s entrance is a literal hall of mirrors and needs to be experienced. I didn’t get a chance to see Never Sleep Alone, the ship’s sex-positive sex advice show. I heard the show is limited to around 30 people at a time, so get there early if you really want to see it. My friends said it was funny, candid, and helpful. (“Meatloaf’ is apparently a great safe word because it means you’ll do anything for love, but you won’t do that.)

We did see the performers of Phantom Folktales walking around the ship. These are small groups of musicians who roam the ship and tell short sea stories set to music. There’s no set times for these, you just have to watch out for them. Also great were the lounge musicians. Anyone who does a ukulele version of Bonnie Tyler’s Total Eclipse of the Heart is okay in my book.

Scarlet Lady’s public spaces are pretty, modern, and colorful. If you’re looking for places to take gorgeous selfies, you’ll find plenty of options on board. Particularly impressive is The Roundabout, which spans multiple decks and serves as the ship’s central atrium.

You’ll find dedicated rooms for weight training, cardio, cycling, and yoga on Scarlet Lady, and there may be more. If you’re into outdoor fitness, the ship has a small boxing ring, monkey bars (for pull-ups and other body weight exercises), and a dedicated, outdoor 250-meter track for running and walking.

The ship’s Redemption Spa offers the usual set of massages and other treatments. I tried the one-day spa pass ($70), which included access to three saunas (dry, steam, and salt), plus “The Mud Room”, where you can coat yourself in mud and later have a nice cleansing shower.  Besides the heated spa rooms, Redemption Spa offers three plunge pools in various degrees of cold.  I found the spa’s quality comparable to the Senses Spa on Disney Cruise Line, and better than anything I’ve seen on Royal Caribbean.

Embarkation and Debarkation (a.k.a., Getting on and off the ship)

One of the great things about Virgin is that they do COVID testing at the port before you board. That means you don’t have to set up your own external appointment and then worry about getting results in time for your cruise. Our testing process was fast and efficient – within 30 minutes of testing we had our results and were headed on the ship.  And Virgin provided free champagne while we waited, which is how all waiting rooms should operate from now on.

Likewise, leaving the ship was fast and easy. One thing to note that’s different from Disney Cruise Line is that Virgin asked us to carry off our bags on the morning of our departure – there was no “set your bags out the night before returning” process as on DCL. That’s fine for most people, but it may require alternate arrangements with Virgin if you need special assistance. Do that before the last night of the cruise.

To this point, my cruise experience has been exclusively with Disney and Royal Caribbean. And as a well-off, middle-age, straight white man, I’m essentially the human equivalent of an American Express Platinum Card: by default I’m welcomed in lots of nice places.

Yet there are few places in the world where I’ve felt more accepted than on Virgin’s Scarlet Lady. And that’s because everybody I met onboard was as friendly and inclusive as you could ever hope from a group of people you’ve never met before. Here’s how I know this: I danced. In public. At a party. Something I haven’t done *ever*, because I can’t dance – what I do is more akin to a gran mal seizure set to music. But after meeting a whole bunch of new people who were all super laid back, I knew no one was going to judge me for not being able to dance (or, really, anything at all).

I suspect a lot of this is self-selection: If your idea of entertainment doesn’t include a sex talk called Never Sleep Alone, or a frozen treats place called Lick Me Till Ice Cream, you’re probably not picking Virgin to begin with. But if you want to chill with people who are as cool as the other side of the pillow, have I got a cruise line for you.

Here are some fun, cruise-centric people worth following on social media: Billy and Larissa at CruiseHabit; Jay at The Shiplife; Addy and Terry; and Jazmine and Rich from A Rich and Jazzy Life.

Here’s where Virgin Voyages can improve:

I paid $40 (regularly $50) for the upgraded WiFi on the ship. I was frequently unable to get WiFi download speeds above 5 Mbps, however, so the free option must have been worse.

The App (and other technology)

Virgin Voyage’s app has many, many technical problems. And that’s an issue because the app is the first place you’re supposed to go in order to book everything from restaurants to shore excursions to your departure time upon returning.

The main problem with the app on board was that it simply refused to proceed beyond the initial loading screen. We were told to uninstall and reinstall the app – again, something difficult to do with slow WiFi – but that didn’t resolve the issues. We missed out on a couple of dining reservations and shore excursion options as a result. And while it’s possible to head down to Sailor Services while on board, it’s not the way anyone wants to spend their time.

Virgin uses an RFID-enabled bracelet called The Band to facilitate room entry and contactless payments. It’s a great idea in principle – Disney’s been using similar technology in its MagicBands for years. But Virgin’s first attempt at this didn’t work well for us.

The bands we were sent in the mail prior to our cruise, stopped working the day we boarded the ship. The first set of replacement bands we got stopped working after a day. The second set of replacements broke on day 3, spilling out their internal electronics. I think the ship replaced so many Bands that they had run out by Day 3, and switched everyone over to plastic RFID-enabled cards. These worked well for the remainder of our cruise.

We had an XL Sea Terrace. At around 225 square feet and with a 40-square-foot balcony, the XL Sea Terrace is an upgrade from the 185 square-foot Sea Terrace (which also has a 40 s.f. terrace). The size of the room was fine for the price. But there are areas of the cabin that could use some attention:

By the time we got our app to work reliably, all of the interesting shore excursions were booked on Nassau and Bimini, including the “snorkeling with sharks” excursion, and all of the cabanas on Bimini. And that happened on a sailing that was, I’m told, only 60% full. I’m not sure what Virgin’s plans are for when the ship is 100% full, but this is something to be aware of.

Overall I think Virgin Voyages offers very good value for money – especially for dining and entertainment. It’s not perfect, but their initial launch of Scarlet Lady shows they’re a viable alternative to other adult-only cruise lines. I look forward to going back.

Have any questions about Virgin Voyages or the Scarlet Lady? Let us know in the comments.