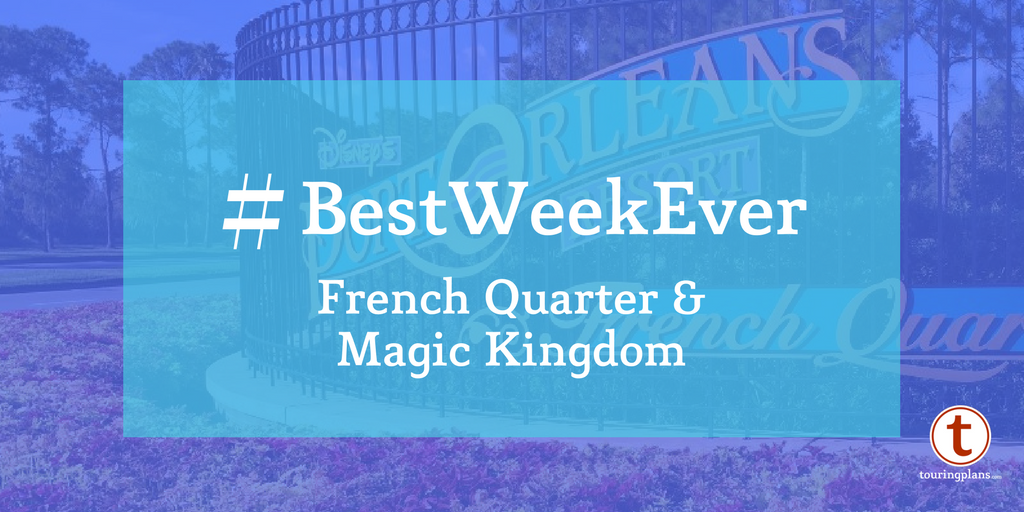 School. Starts. Monday. No matter how many times I look at the calendar, I still can’t believe it. This summer has flown by. With family visits and our ah-maze-ing cruise, it seems like we just got started on summer and it is already gone. We were able to find a reasonable rate at Port Orleans French Quarter, and since we haven’t stayed there in 10 years (yipes!), it sounded like a perfect choice for an end-of-summer staycation. Port Orleans French Quarter has been a sentimental favorite for us–it’s where we stayed on our honeymoon. Although it is a moderate resort, I actually prefer it to some deluxe resorts. The fact it is so small also means that there’s not really a bad building to stay in, because everything is convenient. We arrived early in the morning to check in because we wanted to take the bus from the resort to Magic Kingdom. Because we weren’t planning to sleep there–just pay for the room as a place to change and hang out and watch Mickey cartoons if it rained–we took the option to skip Mousekeeping service for our stay and snagged a $15 gift card for the two nights. Time for breakfast! Don’t worry, I got beignets later on! But this chicken biscuit with bacon-onion jam sounded way too good to skip. The chicken was insanely crunchy and was a great way to start the day off–not too much food because we had a special lunch planned. Breakfast done, it was time to head to the parks, but not before taking a look at some of the décor in Sassagoula Floatworks and Food Factory. Last time we stayed at this resort, it had the incredibly scary giant masks. The new décor is so much better. I especially loved the bottle chandelier. My eagle-eyed husband pointed out the hidden Princess Tiana and Prince Naveen up in the rafters, too. Soon we were on the bus and headed to the Magic Kingdom. Even though our house is closer to Magic Kingdom than any other park, we go to it fairly infrequently compared to other parks because it takes longer to get parked and in. That’s why taking the bus made so much sense for us. We rode our “usuals” (Small World, the Train, and the Peoplemover), but I had also managed to get a good time for a Jungle Cruise FastPass, so off we went for that. I feel horrible that I didn’t catch the name of our Jungle Cruise skipper, because she was fantastic. Not only did she do the classic jokes, but she also had new ones that we hadn’t heard before. (Like showing us the scariest plant in the jungle, which was bam…….BOO!) About a week out, I was trying to figure out dining reservations for a meal in the Magic Kingdom. It occurred to me that we hadn’t had a meal at Be Our Guest for quite some time. I looked for availability, and of course there was none, but I put in an alert notification from the TouringPlans Dining Reservation Finder, and within a day or so, I got a notification for just about my desired time (about 20 minutes later, but who’s counting?) Easy peasy. (If you want to see how easy, Angela has a great video about it.) Be Our Guest is a beautiful restaurant to dine in. One down side is that after we arrived, placed our order, and tried to find a table for the three of us, we found that every table in the entire restaurant was full. It took about 10 minutes of wandering before we found a table that was being cleared and even helped clear the table to lay claim to it. By the time we left, there were several open tables, so things had evened out a bit. It was worth the effort, because I do love their Tuna Nicoise Salad. I opted to skip dessert here (beignets, remember?), but found something even sweeter in the Emporium on the way out. Isn’t this plush adorable? They also had a Mickey bar one. I have no idea what I’d do with them so I didn’t get either, but they were tempting. After lunch, we got a notification that our room was ready, and because it was painfully hot, we decided to head back to the resort. I have to give huge kudos to people who vacation to Walt Disney World in the summer months and manage to survive without an afternoon break. I truly have no idea how you do it. Our room was right in the back of building 2, along the Sassagoula River and right next to the pool. It was the perfect location for us, and the view was fantastic. For all kids-at-heart, the pool area is also wonderful to see, with a giant sea serpent snaking its way through the whole pool area. The head and tongue of the sea serpent is a waterslide. Little touches of whimsy are all around the pool area, and truthfully it makes me more fond of this pool area than some deluxe pools. The only thing I wish it had was a zero entry area. One neat thing is that the pool shower even fits with the theme. Yes, the showerhead is actually up in that umbrella. How cool is that? After the sun went down, there was one more staycation activity I wanted to do. With all the craziness going on in life, we still hadn’t been to see Pandora at night. Staying on property meant the ability to use Evening Extra Magic Hours, so off to Animal Kingdom we went. I know some people have mentioned that it isn’t as vibrant even a month later compared with opening weekend, but we found that the bioluminescence was so bright that everything around us glowed. I was really, really impressed with Pandora at night. It is a completely different experience from Pandora by day. Somehow it is as if Disney managed to build two entirely different theme park lands in one location. I can’t decide which one I like more, but I’d happily visit either one. And so, summer for us comes to a close. There’s so many exciting things coming up this fall. We have a special anniversary cruise coming up, Food and Wine will be starting, and of course all the Halloween and fall décor around Walt Disney World. There’s never a dull moment living so close to the magic. But really, spending time as a family is one of the secrets to how we are able to make every week be the Best Week Ever.