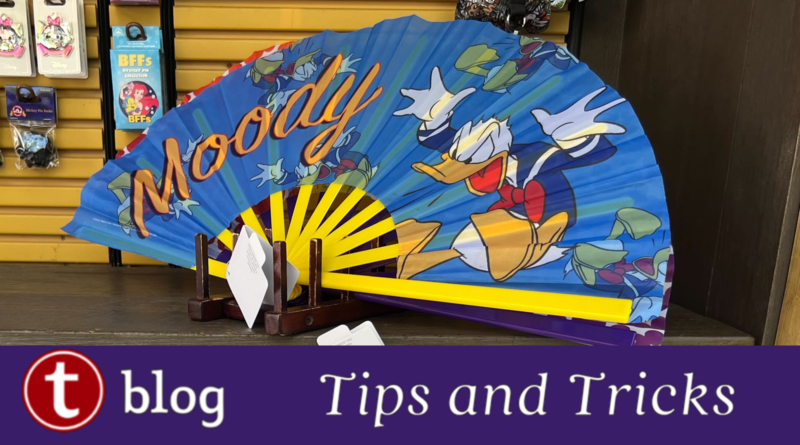 On the day of my daughter’s recent graduation, it was a very unseasonable 92 ºF here in Massachusetts, with significant humidity to boot. It felt kind of like Florida, which meant it was a terrific opportunity to make use of some graduating STEM majors and do head-to-head testing for handheld fans. I’ll give you the rundown on our results, plus info on other personal cooling tech and the science behind it.

It’s a standard that when you report experimental results, you have to detail your methods. Otherwise, nobody can try to reproduce them. (Or alternately, pick them apart and second-guess everything you did).

We used two types of fans, both purchased at a local Dollar Tree.

Oriental-style fans were $1.25 and were composed of a stiff, fine-mesh fabric attached to plastic ribs. Battery-powered fans were also $1.25 (batteries not included) and had plastic housing and plastic fan blades.

Air temperature during the test ranged from 89 to 92 ºF. Graduating seniors dressed in black commencement robes and seated directly in the sun for over an hour were offered the opportunity to try one or both fans. Siblings of test subjects were also offered their choice of fans, but since their seating was in the shade and they were not swathed in black fabric their results were considered less relevant.

Test subjects were allowed to try both styles because telling them they could only use one style “in the name of science” really seemed a bridge too far. Also, if we hadn’t chosen a subjective reporting model then we would have had to measure things like air flow and static pressure, which we were not prepared for.

Test subjects unanimously preferred the hand-held fans. The most common reason given was that they moved much more air, and from a greater distance away. Battery-powered models could produce a good breeze but needed to be awkwardly held close to the head and neck.

Human-powered handheld fans originated about 4000 years ago in Egypt. The folding version was invented in Japan between the 6th and 9th centuries A.D., and has changed little since then. The materials in mass-produced models are cheap and easy to procure, and there’s little reason to believe that differences between the fans we tested and those you might buy would matter.

Battery-powered fans are a different story. They come in a variety of sizes and shapes. Some models have cords or frames to hang around your neck, potentially eliminating the issues our testers found with the need to hold them up. Would a fan with more power or a different design spin faster and be more effective than the cheap models we tried? Here’s what we know.

Spinning faster does increase a fan’s airflow rate. However, it’s not as simple for the manufacturer as “spin faster, cool more!” It turns out that making a fan’s blades spin 25% faster takes almost twice as much power. Twice as fast? That’s eight times as much power. There’s undoubtedly some variation between models, but anything powered by an AA battery is going to have a practical limit if you don’t want it to run down in 5 minutes.

There are good reasons to choose battery-powered personal fans, including the fact that they don’t make your arm tired — our test subjects only used them for a little more than an hour, not an all-day trek through the parks. It’s not easy to select based on airflow (usually measured in cfm) since most that I’ve seen don’t list that information. However, the more power the fan needs the faster it’s likely to be able to spin, so look for models that run on more than one battery or can be connected to the kind of power bank you’d use to charge a cell phone. Features that allow you to have adjustable positioning will also up your satisfaction with this style of fan.

But What About Spray Fans?

Ah. Spray fans. If you’ve ever been to Disney World in the summer, you’ve seen them; a combination of personal fan and mister.

These fans do not spin very fast at all, and the blades are made of foam because those darn kids can’t be relied on not to stick their fingers in them. But, they DO deliver more cooling than the same fan without the mister. That’s because they’re leaning on the cooling power of evaporation. Depending on how hot and humid it is, and how far away you are holding the fan, one of two things is happening:

Even though these are more effective than the same fan without the mister, they’ve never worked for my family. They’re somewhat heavy, which means that kids quickly run out of patience for carrying them even with a neck strap. And my kids always seemed to want to hit each other with them. Of course, your mileage may vary.

How About Cooling Towels?

Ah, the cooling towel. Or, as my mother likes to call it, the cooling shmatte. (Shmatte means rag in Yiddish). How it works: you soak it in water and then drape it around your neck or over your head. Evaporation of the water keeps the fabric feeling cool and helps cool you down.

One key thing to know is that cooling shmattes are not made of just any old fabric, they’re made of hi-tech hyper-evaporative fabrics. Not all fabrics dry at the same rate: think about the difference between, say, a bathing suit and a cotton T-shirt. Since evaporation is doing the heavy lifting here it’s important to have a material that both absorbs a lot of water (like terry-cloth) and releases that water to dry relatively quickly (unlike terry-cloth).

If you have ever visited Disney World in the summer, you’ll know that it’s very humid and things don’t dry that fast. Although cooling towels still work when it’s very humid, the difference is quite noticeable. But wait! … I wonder what would happen if you combined a cooling towel with some kind of a fan to help it evaporate better when it’s humid … hint, hint.

These are my family’s personal cooling tech of choice, so I have a few pro tips here:

Personal fans and cooling towels can’t do it on their own, but when combined with other keeping-cool tactics such as wearing the right clothing, strategic touring, and seeking out air conditioning, they can be powerful tools.

What personal tech do you use to keep cool in the parks? Are you on team misting fan, or do your kids hit each other with them too? Let us know in the comments!

8 thoughts on “Keeping Cool in the Parks: Battery Power or Ancient Tech?”