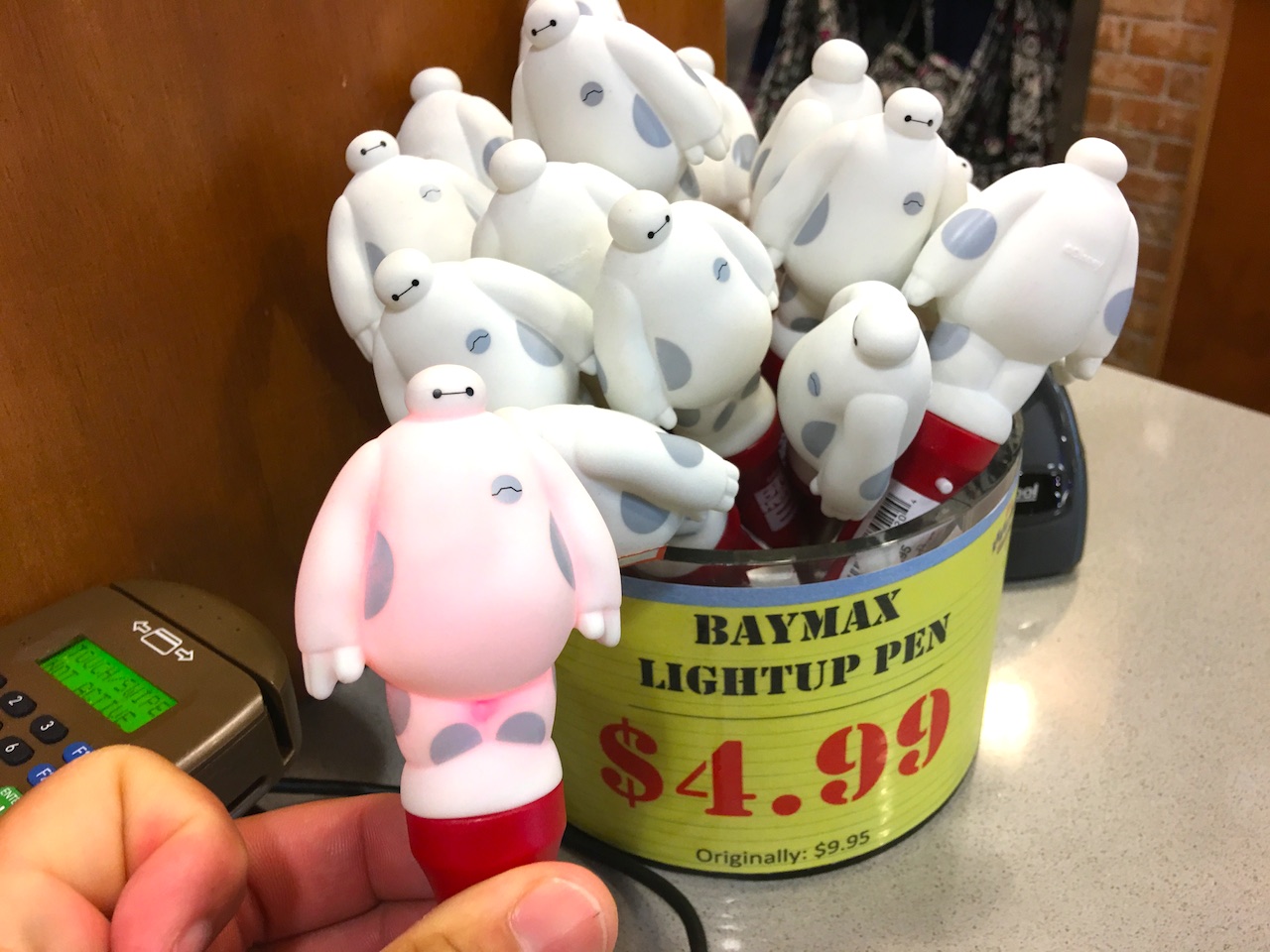 Can you believe 2016 is already over? Think about where we were a year ago at this time. There was no such thing as tiered ticket pricing, there were no cabanas in the Magic Kingdom, Tom Staggs was still with Disney, and we were all waiting for Rivers of Light to debut in Animal Kingdom. Well, at least some things never change.

I want to say up from that this month’s edition of the Outlet Report is a slightly shortened, and the reason for that is during December the Disney Outlet Stores become busier than the Magic Kingdom on a phased closure day. It’s just not fun. Both of us managed a trip in, but ran out screaming in short order. Now, I was going to make Outlet Intern Julia Mascardo go back on Christmas Eve in order to get a first hand report of the carnage, but Head Honcho Len Testa told me that would break several treaties in the Geneva Convention. First they take away water boarding and now this… maybe this generation has gone soft after all.

However, there is no rest for the wicked, and since December is my favorite month of all, I personally had a lot of fun outside of the Outlets. Myself and TouringPlans TV’s own Brian McNichols put out a new episode of the critically acclaimed Pardon the Pixie Dust podcast. While over on Twitter I did a 25 day unveiling of the Theme Park Blogger Advent Calendar as well as drawing many Derek Doodles for a good cause.

Now, what did Julia and I find when we did briefly step into the Disney Outlet Stores? Let’s check it out!

First up was a good one. You’ll remember last month I pulled my hair out seeing a May the 4th Be With You R2 droid at the Outlets that I had picked up earlier in the year at full price in Disney Springs. Well, this month brought the special Halloween figure, R2-BOO, which I did not buy at the stores. Jackpot! Originally $12.99, reduced to $4.99.

In 2015 Disney went all in on hand sanitzers, creating a whole bunch of them. Each one holds 1 0z of hand sanitizer, which is just about the amount you will need if your kid wipes his hand on that “honey wall” in the Many Adventures of Winnie the Pooh queue. This year brought even more designs. The bottles originally were $8.85 each, but these were reduced to just 99cents. Picked one up at that price. For $9 I’ll take my chances with the germs.

More Disney Infinity stuff hit the Outlets. Disney stopping the entire system cold earlier this year was a shocker, and even made the special SATURDAY SIX: IN MEMORIAM article for this year. Here is Mulan, and even more unbelievably, the character “Time” from the Alice Through the Looking Glass movie. Maybe this line needed to be put out of its misery after all. Originally $13.99, reduced to $6.99.

Also appearing were Disney Infinity Power Discs that were originally $9.99, now $4.99. Now I have picked up some of the Disney Infinity figures, even though I have never played the game, because I absolutely adore that cartoonish art style throughout the line. It’s like an awesome shared Universe line-up that has everything from The Incredibles to Pirates of the Caribbean to iconic Disney parks characters. Basically it’s like if Marvel Studios worked with Warner Bros to make an Avengers/Justice League film. Anyway, I was going to take a jab  at why anyone would buy these power discs, but they seem to be almost the exact same shape and size of the ridiculous “pogs” I grew up with and bought way too many of.

Next up was this Phineas and Ferb themed Perry Football. Not sure of original price.

Had to laugh when I saw the sign though. “Great Gift Idea” reminded me of the classic moment in A Christmas Story when Ralphie Parker freezes while on Santa’s lap and can’t bring himself to say what he really wants for Christmas. So Santa suggests “How about a nice football?” which Ralphie agrees to. This is made even better because earlier in the film Ralph had written a theme on what he wanted for Christmas in which he specifically wrote “I don’t think a football’s a very good Christmas present.”

Next up is a toy that seems a little creepy to me. Windup Toy Story toys. These are the ones where you wind them up with a key in the back and they walk like the toy soldiers you see in the Magic Kingdom Christmas Parade. These were originally $9.95, and while I didn’t see a reduced tag I’m imagining they were around $7.99.

Let’s hit up some pins, including a Star Tours one that was reduced to $6.99 and a Miles From Tomorrowland one that was down to $2.99.

A bunch of 2016 pins with characters including these two with Tinker Bell, Cinderella and Prince Charming. All these pins were reduced to $5.99 each.

More 2016 pins. First one up is Sorcerer Mickey and Minnie Mouse playing a giant bass. What possible dark timeline could we be stuck in where that combo would make sense? Just unfathomable. Other one featured L’il Orange Bird and I did buy one of those.

More 2016 items including some metal keychains (reduced to $3.99) and baseballs (no idea of price.)

Some new MagicBands appeared this month, and with the debut of MagicBand 2s this very month, we’re probably going to see truckloads of the original style hit the Outlets in 2017 and I’m going to LOSE IT. I think both were originally priced $29.95, but the “limited edition” Patriotic Mickey one was reduced to $10.99 while the Donald Duck one was $22.99.

Haunted Mansion Tombstone Ornament Set. Seeing these did remind me of a series of “Blogger Tombstone” epitaths I did last year. Originally $29.95, these were reduced to $12.99.

Okay, when I found out about “Halloween Trees” last year I though it was a giant rib (turns out that they are a real thing,) but this next item is one for the books. A Halloween Countdown Calendar. This is a gimmick infringement on Christmas of the highest order. However, I just had a million dollar idea. Halloween Advent Calendar where you get 31 days instead of 25 and each door opens to reveal a fun size candy bar. PATENT PENDING.

Next Halloween item is much more up my alley, it’s a cauldron that comes with hot chocolate and marshmallows. I’m now regretting not buying this, but coming home with Halloween items in December would send my girlfriend through the roof. Originally $11.95, now $4.99.

Earlier this year we saw one of these Cars toys featuring a Max Schnell, who I already forget if they were a real person or a character in the movie franchise despite a reader letting me know. Anyway, here is Lightning McQueen from that same line. Originally $7.99, now $5.99.

These Monster High/Barbie-like Attractionistas figures have been showing up at the Outlets for a long time, but this is the first time I have seen these two particular characters. I think the one of the left is supposed to be themed to the Carousel in Fantasyland, while the one of the right is definitely themed to the Mad Tea Party attraction. Both were originally $29.95,now $9.99.

Don’t have the original price of this GIANT castle play set, but its Outlet price was $39.99. Pretty cool item and I believe it is slightly taller than the castle they have out in Disneyland. (That’s right, I went there Guy Selga!)

Now we’re talking. I have put over the Star Wars and the Disney generic version of this light up toys that spin around and glow. The kids love them. This one even features a Hulk hand. Love it. Bought one of these. Not sure of original price but was reduced to $8.99.

Who can forget this summer’s rushed Jungle Book: Alive with Magic show? Receiving some of the worst guest scores in all of Walt Disney World, the show was mercifully put out of its misery this fall. Kind of unrelated, but how good the Jungle Book live action remake actually was may have been my biggest surprise of the year. I’m all in on the Beauty & the Beast remake coming out in March too. This shirt was originally $24.95, now $12.99.

The Twenty Eight & Main series of shirts keep on coming to the Outlets including this Hall of Presidents one. Originally $36.95, now $14.99

Been a long time since we’ve seen this Trader Sam’s Grog Grotto shirt at the Outlets. I’ll take all the Trader Sam’s merch they want to send over. Although this shirt could probably only fit a kid, which is kind of weird for a bar. Originally $24.95, now $7.99.

I like this Disney Cruise Line Star Wars themed bag. The merch on DCL item for item blows away the quality of any theme park merchandise anywhere outside of the Wizarding World and Springfield USA.  Originally $69.95, now $27.99.

Another item from that NYC to Bahamas sailing, a baseball cap that was originally $9.95 marked down to $2.99.

The highlight of the month though was this sign, where the Outlets made a typo and put that it was a “2015” hat and used a sharpie to make it “2016.” These little moments are why Outlet Intern Julia and I suffer these stores.

I hope no one reading this takes offense, but if you have this Disney salt & pepper set on your dining room table you are a certified weirdo. Not a bad person, just a weird one. Originally $16.95, now $7.99.

I actually can’t believe I took this photo and cropped out the ears. A thousand apologies to you, Dear Reader. It’s a Disneyland 60th Autograph/Photograph combo book that even has a special place “for notes.” Should have thrown in some pages to hold pressed pennies and really made it a White Elephant item. Originally $16.95, now $2.99. And I bought one, so clearly I can talk the talk but not walk the walk.

Our final item of the month is this POS (not what you think: Point Of Sale) item on the counter as you check out. A light up Baymax pen that was originally $9.95, now $4.99. As I have said in the past, this falls into a gray area where it’s a kid friendly item, but who is buying a kid a $10 pen? Are many adults going to be using a light up Baymax pen at the office?

One of the bags they were using at the Outlets was a Disneyland 50th Anniversary bag. Reminder that we were celebrating the 60TH anniversary last year.

We’ll close with a brief look at what being at the Outlets is actually like. This is just PART of the line to check out. You can’t even see where the line goes, but it loops around like some E-Ticket attraction queue. Just the worst. The absolute worst. But we do it. Every month. For you.

Have a Happy New Year.

10 thoughts on “The Magic, The Memories, and Merch! December 2016 Photo Report of the Disney Outlet Store”