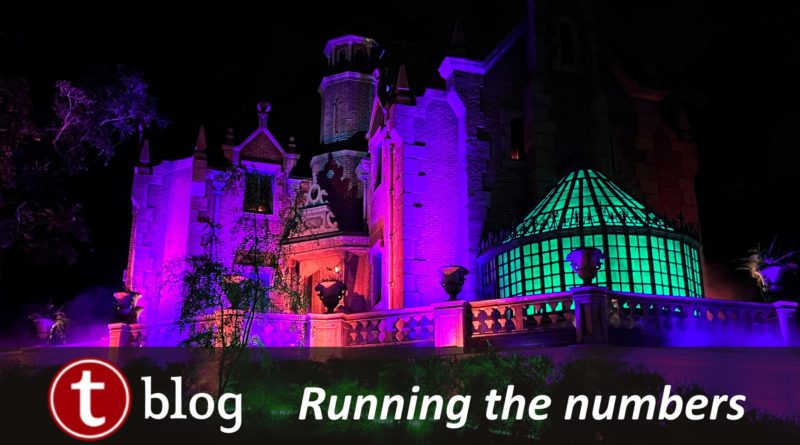 Mickey’s Not So Scary Halloween Party is incredibly popular this year! If you’re visiting Walt Disney World between now and the end of the October, chances are that you’ve at least been tempted to go see the full return of this party. And you should be! Tickets may be expensive, but the party features the first fully-staffed parade we’ve seen since the parks reopened. And wait times at rides during the party are incredibly low. Plus … that Jack Skellington puppet.

But how should you spend your time during the party? 5 hours seems like a lot, but it passes quickly. Especially if you wait for over 2 hours just to see one character! So if you’re looking for a good balance of attractions with low waits, trick-or-treating, characters and entertainment, look no further!

Mickey’s Not So Scary Halloween Party runs from 7 pm to midnight on the following dates:

Note #1 here is to try to not visit Magic Kingdom on non-party days, especially in October. Yes, you miss fireworks that way. But every tries to avoid party dates if they don’t have party tickets, which makes those days so nice at Magic Kingdom, and forces everyone into the non-party dates. In October, only 13 days don’t have parties. Those thirteen days will be disproportionally crowded.

Note #2 is that your party ticket gains you entrance into the Magic Kingdom as early as 4 pm. Go ahead and get there early to get some attractions in before the party starts!

Note #3 is that DAS works during the party! For attractions and characters. This can be a HUGE win if you’re eligible for DAS. I’d definitely recommend getting DAS return times for the major characters and doing attractions by standby. Character waits >> attraction waits, almost always.

The strategy presented in this article gives some specific times for various entertainment options. In case you want to make your own plan, the various shows and offerings are presented at the following times:

A Note about Characters

Character meet and greets at Mickey’s Not-So-Scary Halloween Party are something of feast or famine. Or, really, eat-up-your-whole-night or delightful.

The hot-ticket characters require hours of waiting, and they take frequent breaks. If you’re absolutely set on meeting one, you’ll need to line up well before the party actually starts, and you’ll need to be okay with dedicating most of your party to waiting for them. Who are these popular characters? Jack and Sally, Elvis Stitch, and Pooh and friends. As an example of what your night look like if you absolutely must meet Elvis Stitch, for example, I present this real-life scenario that required over 2 hours of waiting:

On the other end of the character spectrum is the location at Mad Tea Party. At this one spot, there are FIVE different characters that rotate in and out. For example, the Queen of Hearts will be closer to the Tomorrowland shrubs and Alice and the Mad Hatter will be nearer Pooh – all at the same time.

With party tickets, you can enter Magic Kingdom as early as 4 pm. And you should enter as early as possible if you want to ride some attractions before the Halloween festivities get started. To that end, the following would be a reasonable way to spend the afternoon:

So, the party has just officially started. And, ideally, you’ll have already done six of the attractions with some of the highest waits on a normal day in Magic Kingdom. Not a bad start.

When the party starts, you’ll be tempted to immediately go trick-or-treating, or some other sort of fun. Don’t do it! Everyone else at the party will be giving in to that temptation. If you trick-or-treat early, you’ll have to carry around heavy candy all night. And, spoiler alert, Disney doesn’t run out of candy. Save that for much later. Your goal is to experience a few more attractions before getting into the party spirit.

Every treat location at the party has the same treat options. You don’t need to visit many of them unless you plan on eating your weight in sugar over the next few weeks. But, it does pay to have a savvy strategy to get as much candy as possible with as little walking and waiting as possible.

Part one of the strategy is to wait until after 10 pm. Everyone else will have already loaded up their treat bags at that point, so the lines at the trick-or-treat locations will be almost non-existent. Easy.

Plus, Tomorrowland is objectively the best land for getting a lot of candy in a short period of time, because you also have stops at Carousel of Progress and Cosmic Ray’s. That’s four total stops with very little walking in between.

Where should you avoid? Pinocchio Village Haus and Country Bear Jamboree. Both locations have very long walks within the attraction or restaurant, and you’re getting the same treats as your would at any other location. Avoid.

Are you headed to Mickey’s Not So Scary Halloween Party this year? Do you plan on emphasizing rides, characters, treats, or attractions? Let us know in the comments!