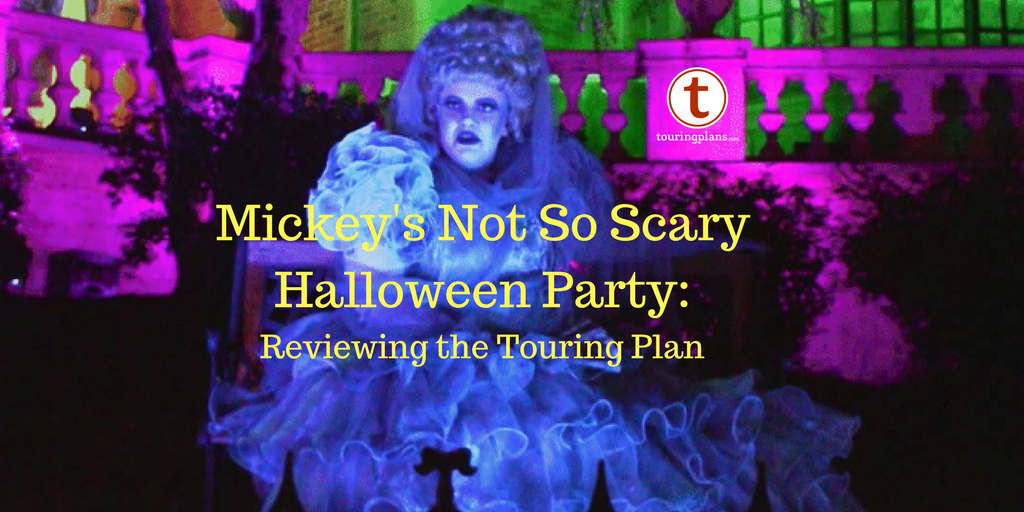 The touring plan has been updated after our experience. We found the plan was very ambitious. Most of our touring plans are designed using our software and historical data, however with unique character meet and greets in this event, the wait times can vary dramatically. This plan is more of a strategy to navigate the Halloween party, rather than a precise itinerary.

The plan starts in Adventureland for character meet and greets and trick-or-treating before the 9:15 pm parade. After the parade, we squeezed in a ride on the Haunted Mansion before heading to Main Street to see HalloWishes. Then it is off to Tomorrowland and Fantasyland for more characters and candy.

It has been a few years since I did the Halloween party but very little has changed.  The markers for the trick-or-treat locations have been changed from a Mickey Ghost to a colorful Mars|Wrigley branded marker. Disney has added multiple party-exclusive Magic Shots, Animated Magic Shots, and photo opportunities from the Disney PhotoPass service. The candy path that went from New Fantasyland to Space Mountain is no more. The top-off candy at the exit at the end of the party has also departed. (But have no fear–with trick or treating, you can still get a full bag of candy by the end of the night.)

The Mickey’s Not So Scary Halloween Party does not start until 7:00 pm, but you are allowed to enter the Magic Kingdom at 4:00 pm. This will give you some time to ride attractions and eat an early dinner. Not all dining options are available during the party, and some close at 6:00 pm. Jack Skellington and Sally, Moana, The Seven Dwarfs, and possibly other characters start meeting guests at 5:00 pm.

The character meet and greets are not continuous. The times characters are available and where they are located are shown in the My Disney Experience app. Note that they take small breaks, in addition to the times listed.

It is not possible to do everything at the party. A party ticket is expensive, so use your time wisely. For most, HalloWishes fireworks and Mickey’s Boo-To-You Parade are must do’s. Yes, attraction wait times are low, but they are available all year round and are not the highest priority for spending your time. Trick-or-treating is fun for all, but you should pass on a treat station that has a long line, especially early in the evening when lines for treats are much longer than later at night. Most all treat stations have the same mix of Mars candy. (Pinocchio Village Haus has Werther’s caramels.)

2017 was my fifth Halloween party and the first Halloween party for my wife, Paula. We arrived at 5:00 pm and went to Haunted Mansion to use our FastPasses. (This was a test as there was a rumor that FastPasses would be canceled if you enter the Magic Kingdom with a party ticket. Our party tickets were linked to our My Disney Experience accounts.) We had an early dinner at Columbia Harbor House and sat on the second floor in the room that overlooks the walkway between Peter Pan and the Haunted Mansion. This was an excellent place to people watch. (The man dressed as some kind of hybrid Elvis-Elsa was quite a sight!) After dinner, we walked around to see the transition of the park for the Halloween party. I talked to a cast member and was told they were relocating some characters to keep them out of the impending rain. To my surprise, some Halloween party characters were already out, and long lines had already formed.

At 7:00 pm we started testing the touring plan, Mickey’s Not So Scary Halloween Party for Parents with Small Children (Focus on Treats).  During our testing, I realized the plan was too ambitious and it is now pared down.

We got in line for the Jungle Cruise candy station at 6:45 pm and were not the first people there. At exactly 7:00 pm, they started handing out candy. From there we went to wait in line to meet Jafar. We waited for 22 minutes and then were told he was going on break so we left.  At 7:35 pm, we got in line to meet Captain Jack Sparrow who was on the stage across from Pirates. After about 10 minutes in line for Jack Sparrow, Paula got bored and went to ride Pirates (which was a walk-on).

During the long wait, we discovered that the people in front and behind us were Touring Plans subscribers.

At about 8:45 pm, cast members started telling those of us in the queue that Jack would be going to the parade at 9:00 pm and would return after the parade at about 9:45 pm. When we got the 15-minute warning, we tried to calculate who might be the last group to meet Jack before the parade. The mom and 2 kids who were right in front us in line were the last to meet Jack Sparrow. It’s a good thing. As her children went on the stage to meet him, she began crying. She was widowed only 8 months ago and this was her first time doing the parks without her husband.

The lines for Moana and Jack Skellington meet and greets were, according to some cast members we asked, more than 2 hours.

From Adventureland, we went into Frontierland to wait for the parade, where we stood on the side by Splash Mountain. As soon as the parade was over, we went directly to ride Splash which was a walk-on.

After riding Splash, we did 3 candy stops (Splash, Tom Sawyer’s Island, and Liberty Square Riverboat) on our way to Haunted Mansion which had only a 10-minute wait. Lady Renata was sitting on a bench on the lawn was interacting with guests and had a great sense of humor. When we exited the Haunted Mansion it was 10:22 pm, so we missed the first part of the 10:15 pm fireworks. But, seeing them from Fantasyland (instead of on Main Street) was an interesting view because fireworks were going off in all directions. We made another candy stop at Mickey’ s Philharmagic en route to Gaston’s Tavern to meet him and Belle. That line was more manageable (we waited only 20 minutes) and this was the highlight for my wife.

Our final candy stop was at Pete’s Silly Sideshow around 10:56 pm. There were 2 lines and each had 3 candy stations.  We zipped in and out because there were only a few people. We walked to Tomorrowland and it was raining. To stay out of the rain, we rode the People Mover and asked if we could stay on for a second ride (and they said yes). Our plan was to go see the midnight show Hocus Pocus Villain Spelltacular but we were too exhausted and snuck out during the second parade.

Overall, the Halloween party is fun: the music is great, the parade is fantastic, and the ride wait times are low. The only thing that we found frustrating was the time spent waiting to meet the characters. I would like Disney to use FastPass+ for these meets. What are your thoughts?

Have you attended a Mickey’s Not So Scary Halloween Party? What’s the longest that you’ve waited for a character meet and greet? What’s your best tip for trying to do as much as possible during the event? Let us know in the comments.