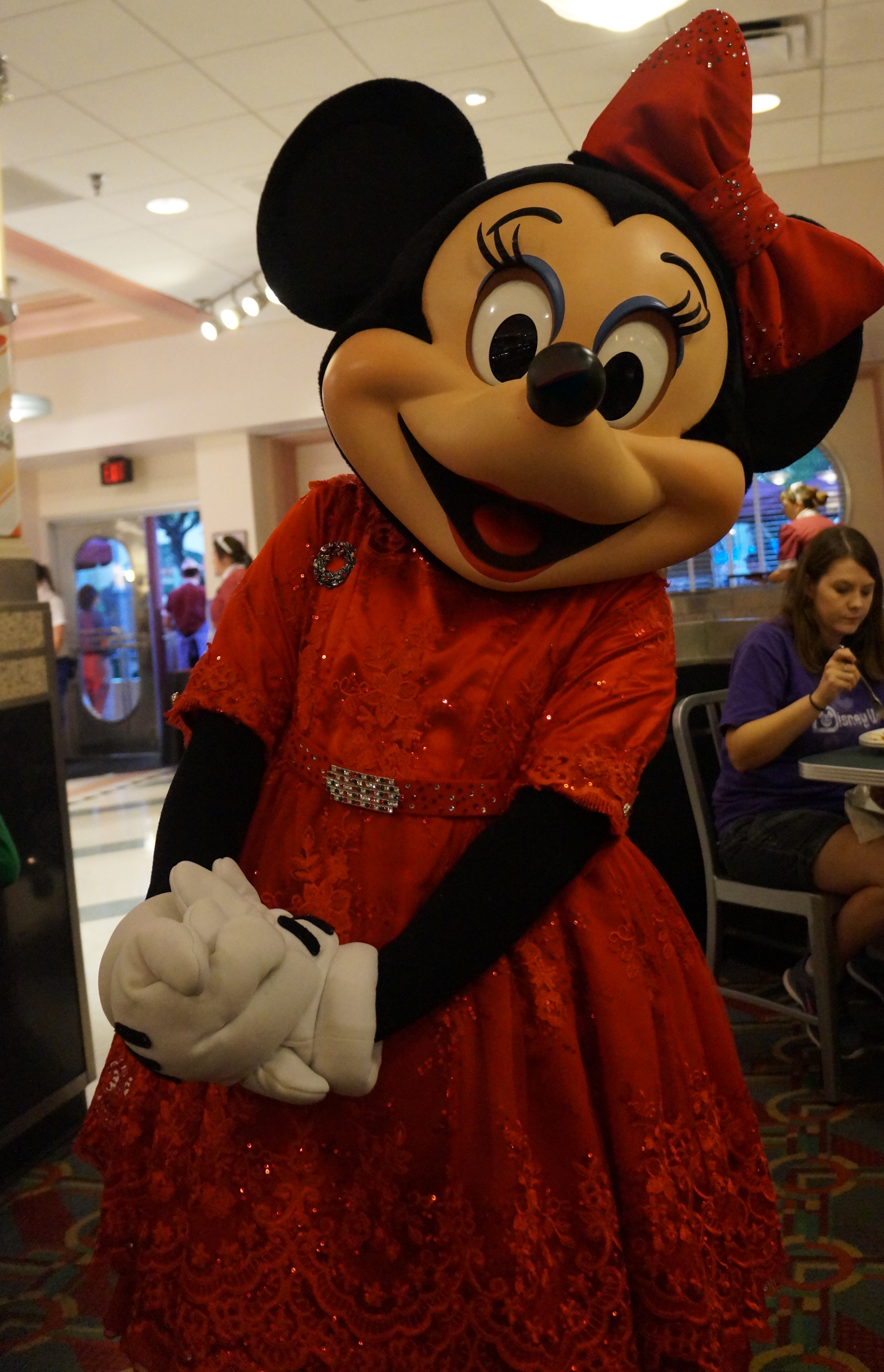 It’s the most wonderful time of the year and holiday parties are always in vogue. Recently, Hollywood and Vine in Disney’s Hollywood Studios has begun to offer dining with Minnie and friends for the holidays, and it has been announced that this dining offering will continue after the tinsel is off the tree. Previously, I have had a fantastic meal at the now-retired Jedi Mickey meal during the also-retired Star Wars Weekends. How would this meal stack up?

Your host is Minnie Mouse, but when you arrive, you are greeted by Santa Goofy for a photo opportunity. The characters will not sign autographs during the meal, and so you are given a souvenir autograph card with everyone’s signatures. Once seated, we were each given a small sample of Minnie’s hot cocoa. It was extremely rich and thick (more like a drinkable mousse than cocoa), but the chocolate taste was not overpowering.

During our meal, we were visited twice at our table by each character: Minnie, Mickey, Donald, and Daisy, all wearing their holiday finest. Compared with the character interaction we saw during the Jedi Mickey meal, the characters seemed a bit more rushed at this meal, and the spacing was not the best. Within the first five minutes of our meal, we had seen all four characters at our table, and then we didn’t see them again until we were paying the bill. In some ways this was nice, as we could make trips to the buffet without fear of missing anyone, but it did feel a bit chaotic while trying to get settled at the table. (As a side note, Minnie was a gracious hostess, moving a chair out of the way to help me get a better picture of her beautiful dress.)

Realistically, character dining is more about the characters than the dining. Still, there were a few stand-outs on the buffet. One surprising item was the cranberry butter at the bread station. This is an incredibly simple item — just butter whipped with fresh cranberries — but it was really delightful on either the rolls or pretzel bread available and something I plan to do for my holiday meals at home. Also on the cold foods area was a lovely quinoa salad with dried fruits that had a great flavor. Another stand-out item was the oak-roasted flank steak, which was some of the most flavorful steak I’ve had at Disney.  The red velvet cupcakes were also a winner with everyone at the table. I personally liked the egg nog cheesecake, but all my dining partners don’t like egg nog, and so were unimpressed.

Although there were a few hits, there were also a few misses. There was a pear and pomegranate salad that, if you were one of the first people to get a fresh tray, you would find pear and pomegranate, but with only a dozen slices of pear on top and a handful of pomegranate arils tossed in, it is possible that you’d get all greens and no pear nor pomegranate. The other items that were a bit odd were on the dessert buffet. The chocolate fountain is there, and the chocolate dipped marshmallows with peppermint crunch were nice, however the same treatment with the strawberries fell flat with the odd taste of strawberry and peppermint. The other miss for me was the gingerbread cupcakes that were so strong that they were difficult to choke down.

Many of the other items on the buffet were typical holiday dishes that made for a lovely meal. The carving station offered ham and turkey, and there was apricot-stuffed pork loin on the main buffet. For seafood lovers, there were peel-and-eat shrimp, Verlasso salmon, New Zealand mussels, and fish and chips (which appeared to be catfish nuggets and potato chips). A semi-traditional green bean casserole was there, with bread crumbs instead of fried onions on top. There also was a sweet potato casserole, mashed potatoes and gravy, barbecued meatballs, pumpkin ravioli, butternut squash soup, and other hot and cold dishes. There is also a well-stocked kids’ buffet with the usual offerings (chicken tenders, macaroni and cheese, pasta, carrots, broccoli, and tater tots). At the dessert buffet, there was chocolate dipped gingerbread similar to what you’d find for sale around Walt Disney World, pumpkin pie tarts, vanilla and chocolate soft-serve ice cream, and stolen.

Somehow when I booked this meal, it got coded as having Fantasmic dinner package with it. If you are doing the Fantasmic dining package, you aren’t able to use Tables in Wonderland. As we were just there for the meal and not Fantasmic, our server was kind enough to take back our Fantasmic passes and switch us to the “normal” meal to apply the discount. At $46.99 per adult and $27.99 per child before discount and gratuity, this meal costs more than many presents you’d put under the tree. If meeting Mickey and Minnie or getting a picture with Santa Goofy is a must-have experience, this meal will fit the bill. But overall, the meal is good, but not exceptional. With plans to continue this meal into 2016 without the holiday overlay, it would be a good option if it is your one and only character meal, and likely easier to get into Chef Mickey’s, but not a must-grab meal in my view.