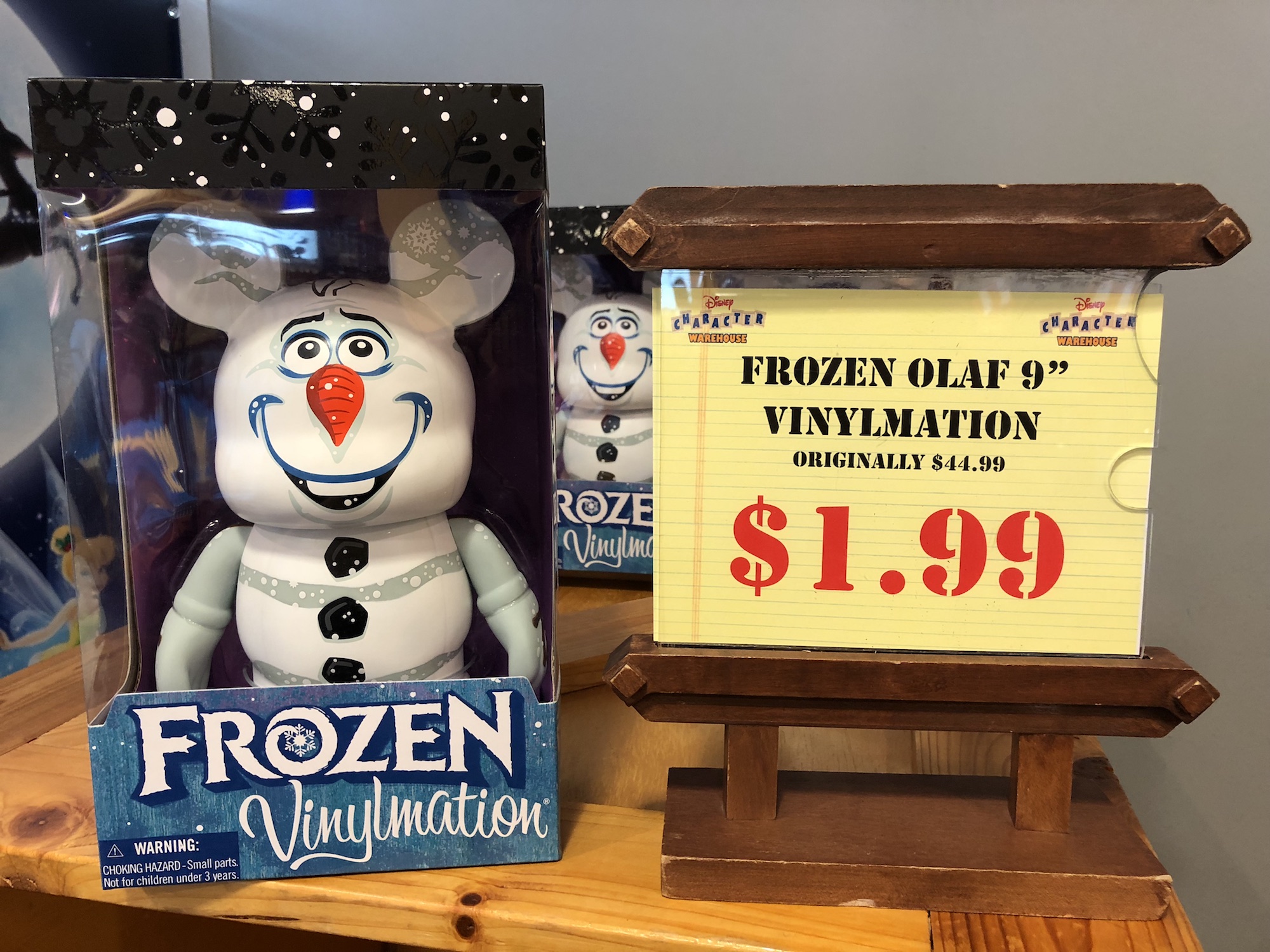 Welcome to the latest edition of The Magic, The Memories, and Merch! the longest running monthly look at the Disney Outlet Stores in Orlando. Outlet Intern Julia Mascardo (who recently started a monthly series on NEW Disney merchandise at the parks and resorts) secret shopper Daisy Lauren (when she’s not making a whirlwind trip to Disneyland) and I found a whole bunch of neat items this month including a Mickey Mouse’s birthday hat, more Figment magnets from the Festival of the Arts, and more discounted items from Pandora: The World of Avatar.

Ready to see what we else we found? Alright, let’s go!

December often brings some really great deals to the Disney Outlet Stores in Orlando, and it also brings out the eBay pirates like hyenas to a fresh kill. The stores open earlier in the morning and close later in the evening, and generally can be packed. With the eBay pirates buying hundreds of items, the already incredibly slow check out process at the registers can seem like time is standing still.

Here’s an example of a normal Outlet item that gets slashed during the Holiday season, as this giant Olaf Vinylmation was reduced all the way down to $1.99. This is a dollar cheaper than the 3″ Vinylmations are marked down to.

These plastic plates (with cup holder) are sold at Food and Wine for $6.99. They were marked all the way down to 49 cents, which is pretty much the lowest price you’ll ever see anything priced at. I picked up four of these for trips to places like the beach.

One thing that the pirates were buying in cases (I kid you not, cases) were these Locally Grown Minnie and Mickey mugs. They certainly are cute and you can’t beat that $1.99. price point.

This was a surprise. Not only was an official Tervis Tumbler product marked down to just $2.99, but it was the 2018 Hocus Pocus Villain Spectacular edition. Still passed.

Talk about a discount, the “Tink” (whaaaaaaaaat?!) Haunkkah mugs were brought all the way down to 49 cents, an unheard of price point for a coffee cup.

We’ve seen products like this one before, and I don’t understand what benefit Disney gets from featuring their characters like this. Maybe they sell a couple shirts and cups like this? But you also have people seeing Tinker Bell way off brand. Originally $19.95, now $4.99.

Pretty classy DCL mug featuring the Alaska sailing. This was originally $16.99, reduced to $8.99. I have it on good authority that none other than Captain Cruiseline himself drinks out of this cup while reading another award winning SATURDAY SIX.

Cute little Frozen playset. Originally $29.99, now $14.99. I was at many Disney retail stores throughout November and December and it didn’t seem like the Olaf’s Frozen Adventure themed merch was flying off the shelves. That combined with the vitriolic reaction to the “short” playing in front of Coco has to be keeping some people in Burbank up late at nights. I was ready to hate the film, but I actually thought it was pretty decent. The songs were unremarkable, but that should probably be expected considering the team who wrote the mega-hits from the original Frozen weren’t part of this.

This is what I live for. Junk from Pandora: The World of Avatar. This is a PEN SET featuring the SKULLS of PANDORA ANIMALS. If you have any idea what possible demographic this was for, please leave your thoughts in the comments. Maybe this is what you get your kids as punishment if they can’t behave themselves in the 2-4 hour queue for Flight of Passage? Originally $24.99, now $12.99. James Cameron has a lot of ‘splainin’ to do signing off on this.

Close up of two of the patches.

First piece of Rivers of Light merchandise to hit the Outlets with this shirt. Originally $19.99, now $9.99. Hard to believe it was just earlier this year that the much anticipated show made it’s debut, and led to one of my favorite Burgan Fine Art drawings of the year.

I know how you all feel when you see items in this Fine Blog Series that you paid full price for, and I had those same pangs of regret when I saw this Big Bad Wolf shirt show up. I purchased it at the original price of $29.99, but it has been reduced to $9.99. How did I feel when I saw the shirt? Like this.

This Oswald shirt was same price.

And this Mad Hatter shirt too.

Now THIS is a Mickey Mouse shirt you don’t see every day. For my thoughts on this shirt I’m going to reach out to the Wildcats cheerleaders. Originally $24.99, now $9.99.

Much better Mickey Mouse shirt here, but would probably look better if it was just one solid color instead of the two tones. Originally $34.99, now $14.99.

EPCOT Center sweater to keep the cold hearts of fanboys warm. Discounted to $19.99.

Longtime Outlet Readers know how much I love comic books, and one of my all time favorite artists is J Scott Campbell. This postcard features Star Wars’ own Princess Leia, C3-P0 and R2-D2 from Campbell, and he’s also done a ton of Disney princess artwork that is worth checking out as well.

You better believe I bought one of these Splash Mountain postcards. They have tons of awesome postcards like this at the Wonderland Gallery at the Marketplace Co-op in Disney Springs but all priced at $5.99. I’m not exactly sure what number I would need to have squirreled away to feel it’s okay to drop $6 on postcards, but it would have to be at least six figures.

I have no idea what’s going on, but any time I try to write ABOVE this Pinocchio magnet picture it ends up deleting everything so I’ll have to write it below. Cute design. Originally $9.99, now $6.99.

Last month there were some of the AWESOME Figment magnets from the Festival of the Arts, and this month some more designs popped up including The Scream! These were $1.99 each. A bargain at twice the price!

For Christmas Day I did a special SATURDAY SIX looking back at the Best and Worst items found atthe Disney Outlet Store in 2017. One thing I completely forgot to put on was that bonkers PIN QUEST item from back in August. This was the scavenger hunt/trivia contest-like “game” where Disney had guests buy the rules, then buy pins at every stop, then buy the completer pin once they finish. Basically Bob Chapek: The Home Game.

Well, this month some of the pins that were part of the game arrived. All were priced at $1.99.  First up is this one featuring Big Al.

OF COURSE I BOUGHT THEM.

When I sailed my first Disney Cruise, I remember seeing a “Officer Pin Trading Night” advertised, but didn’t go because it sounded kind of weird. The pin for the 2017 trading night made it to the Outlets, reduced to $5.99.

Fort Wilderness is right at the top of my overall favorite Disney resorts, so I definitely picked up this pin for just $3.99. I also ate at Trails End for the first time this month and it just may be my all time favorite Disney restaurant.

There were a TON of these Lion King pins, which made me wonder what they were for at the parks. Several warnings plastered all over them too, which makes me think this was some sort of giveaway or promotional tool. The pin was priced at $5.99.

I can’t stand “blind box” pins, but here’s a set featuring awesome Marc Davis artwork for Pirates of the Caribbean. Reduced to $6.99 each.

Another blind box pin set featuring designs based on Star Wars stickers that came out with the Topps trading cards back in the 1970s. These were originally $19.99, reduced to $6.99.

A 45th Anniversary antennae topper for $1.99. Remember how I mentioned I was at a lot of Disney retails stores in November and December? Well the World of Disney had a TON of various antenna toppers marked for “stocking stuffers” so we’re probably going to see ALL OF THEM here at the Outlets in the coming months.

Another thing I saw at the retail stores were a new type of “baby” Disney plush where it looked like the characters were being swaddled. No surprise that more of the regular “baby” plush is making it’s way to the discount stores. Here we have Marie from The Aristocats.

And here is Sven from Frozen.

Last month a bunch of toys from the Mickey and the Roadster Racers line arrived, and this month Goofy joined them. Originally $16.99, now $6.99. Got this for the little guy in our family who loves the show and LOVES “Goof-fu.”

Avengers figurine set featuring Black Panther and Crossbones but not Captain America, which is an interesting choice to make. Reduced to $8.99.

Always interesting to celebrate birthdays of fictional characters. These Mickey Birthday ears were originally $17.99, reduced to $4.99.

How about a Vera Bradley Alice in Wonderland backpack? Originally $140, reduced to $66.99.

And the accompanying Vera Bradley change purse. Originally just $90, reduced to a steal at $34.99.

This Star Wars bag was orginially SEVENTY DOLLARS, reduced to $24.99.

This may be the all time weirdest pillow I have ever seen on Disney property, let alone the Outlets. Originally $34.99, now $12.99. I should have bought it to use as my “frustration pillow” that I can use to scream in any time I get news like “$7 pizza slices at Pizza Ponte in The Edison.”

Speaking of pillows, thanks to a dedicated Outlet Report reader, we’re going to take a trip to Cast Connection. The Disney Outlet Stores are the last stop merchandise makes before the Disney Dump. Before it goes to the Outlets, it often makes a stop at Cast Connection, a store exclusively for Disney Cast Members. Located off of Western Way, Cast Connection has a ton of stuff that you see here in the Outlet Report each and every month (like plush, Tsums, and pins) but also a bunch of things that we regular people never get the opportunity to buy. Where else could you find seemingly hundreds of Used Bed Pillows for 50 cents?

Booths from restaurants such as 1900 Park Fare and Hollywood & Vine.

The store also has great deals on food items. A really great place for Cast Members and their spouses that allow them the opportunity to get necessities as well as collectibles for the right price.

I hope you enjoyed our quick trip to Cast Connection. I know many people have heard about the store, but you rarely see any pictures of what it is actually like. A huge thank you to our anonymous Friend of the Outlet Report. But wait, that’s not all! Here you thought your 3 day weekend couldn’t get any better. Guess what? Tomorrow morning on the TouringPlans blog I will have a review of the Disney Dog-Friendly Hotel experience. That’s THREE STRAIGHT DAYS OF BURGAN, which is TWO DAYS BEYOND THE DOCTOR’S RECOMMENDED DOSAGE OF DEREK.

15 thoughts on “The Magic, The Memories, and Merch! DECEMBER 2017 Photo Report of the Disney Outlet Store”