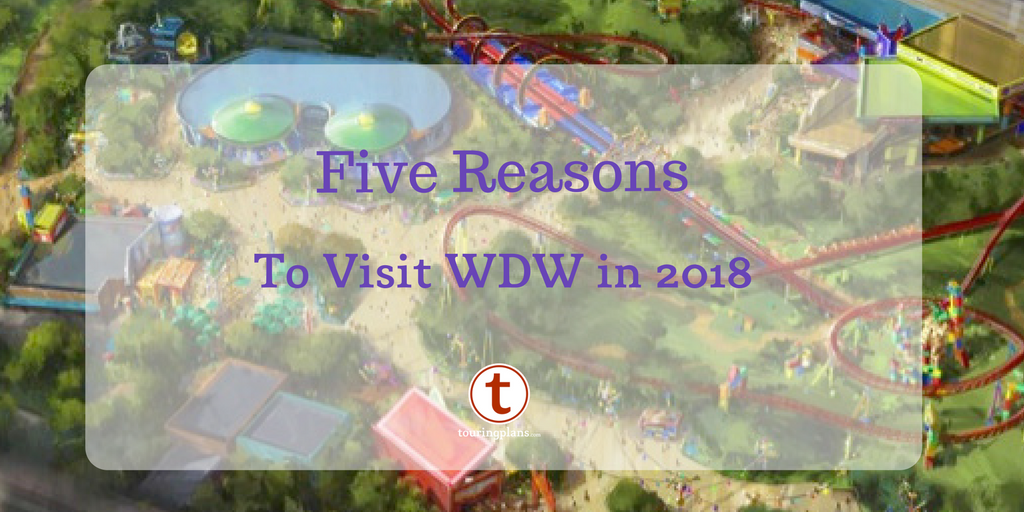 As workplace calendars take shape for 2018, attention turns to vacation destinations. For the Walt Disney World addicts among us, it’s not a question of whether we’ll go, but when and for how long. Others may need additional incentives to choose theme parks over the beach or big city.

For those of you with the challenge of convincing your significant other to spend their valuable vacation time armed with MagicBands and Touring Plans, we’ve got you covered. Read on for five reasons you can use to argue that 2018 is the year to visit Disney.

New lands don’t come around every year, but for the second straight summer, Walt Disney World will take down the construction walls and invite visitors to a new theme park land.

While not as impressive in scope as Pandora – The World of Avatar at Disney’s Animal Kingdom, the new Toy Story Land will bring kid-friendly attractions to a park that badly needs them, Disney’s Hollywood Studios. Disney announced an opening of summer 2018 for the land. If it follows the same pattern as Pandora, that would mean soft openings in May.

The land, which will include the existing Toy Story Midway Mania! attraction, will be modeled to look like Andy’s back yard. Visitors shrink down to toy size in their surroundings. The two new attractions, the Slinky Dog Dash roller coaster and Alien Swirling Saucers, should be kid-friendly, but with enough clever theming to appeal to everyone.

Add a quick-service dining location, Woody’s Lunch Box, and you have enough to bring visitors back to Hollywood Studios, even as a large portion of the park continues to be blocked off by construction walls (more on that later).

Let’s face it, sometimes a Disney vacation is a question of making it work for your budget. Each year, expect to pay more for tickets, food, and merchandise. This year, however, might bring a better deal on your room, thanks to the construction going on at Disney’s resorts.

One example is at Disney’s Caribbean Beach Resort, where rooms have been discounted due to a refurbishment project that has closed many of the amenities at Old Port Royale. The Disney Skyliner gondola transportation system is being added here. Caribbean Beach guests will also see construction of Disney Vacation Club’s addition, Disney’s Riviera Resort. Disney is also adding a 15-story tower to Disney’s Coronado Springs Resort.

While the look of cranes and heavy equipment isn’t exactly “magical,” the savings can be. If you’re the type of person who tries to maximize their park time and spend less time at the resort, it’s worth consideration. Understand what’s going to be unavailable during your trip and manage your expectations.

All the construction also means that quite a few moderate-level rooms have been taken out of inventory, so it pays to jump on availability as you see it. Disney’s current room offer is its Gift of Magic room discount of up to 25 percent, good for dates from Jan. 1 to April 14. Expect to see offers for more dates early this year.

Well, not too far outside of the “Disney bubble.” We’re talking about the seven Disney Springs Resort Area Hotels that now have additional benefits to entice visitors.

The added benefits are a major selling point, providing more time in the parks with Extra Magic Hours. The 60-day FastPass+ booking window is pretty much the only way to snag a time for Flight of Passage or Seven Dwarfs Mine Train.

A couple things to note: When booking one of these hotels through a Walt Disney Travel Company package, the resort fees will be included in the package price. Otherwise, resort fees are always an additional expense to keep in mind when booking non-Disney resorts.

The other major factor for these resorts is parking and transportation. While all these hotels have shuttle service to the parks, they’re not as frequent as Disney transportation. If you want to use your own car, you will have to pay to park at both the resort and the theme parks. One of the continued exclusive perks of being a Disney resort guest is not having to pay $20 a day to park at the theme parks.

The momentum continues into 2018 with additional restaurant openings, including the much-anticipated Edison. Themed to an old power plant, it will be a family restaurant serving contemporary American fare during the day. After 10 p.m., it transforms into a 21-and-over nightclub. Aerialists will be among the entertainers in the gothic-industrial space. The Edison, which has been in the works since 2015, rang in the new year with its grand opening.

Also opening between now and January, adjacent to The Edison, will be three Italian venues in the art deco structure themed as the Disney Springs air terminal. Maria & Enzo’s is a family friendly Italian trattoria. Enzo’s Hideaway is a lounge themed as a speakeasy in a former bootlegger’s hideout. Finally, Pizza Ponte is a fast casual location, serving pizza by the slice, along with sandwiches and Italian pastries.

Later in 2018, Wolfgang Puck Bar & Grill will open in the Town Center section and Jaleo, a concept by renowned chef José Andrés, will bring Spanish cuisine and tapas to the West Side.

Calm before the Star Wars storm

For all that is happening in 2018, the expected opening of Star Wars: Galaxy’s Edge in 2019 will be looming over the resort. The much-anticipated land is likely to cause a great many to delay their trip until it can include a ride on the Millennium Falcon.

That fact also means we could see unprecedented crowds descend on the resort in 2019. So why not aim for the lull before the onslaught?

In fact, 2018 could be the last we see of reasonable crowds at Walt Disney World for a while. I expect the Star Wars hype to carry over well into 2020. By that time, my guess is you’ll begin seeing a lot of the other planned attractions opening in anticipation of the 50th anniversary of Walt Disney World in 2021. Magic Kingdom has a Tron coaster on its way; Epcot is getting Ratatouille– and Guardians of the Galaxy-themed attractions, along with a space-themed restaurant. Hollywood Studios will welcome Mickey and Minnie’s Runaway Railway in hopes of absorbing some of the spillover Star Wars crowds, some of which could be staying at a new Star Wars-themed resort.

In short, we’re preparing to enter an incredibly busy time for Disney’s Florida parks. So, if your preference is for a more leisurely vacation that doesn’t involve fighting the hordes of fellow travelers, a 2018 trip might just be your best bet.