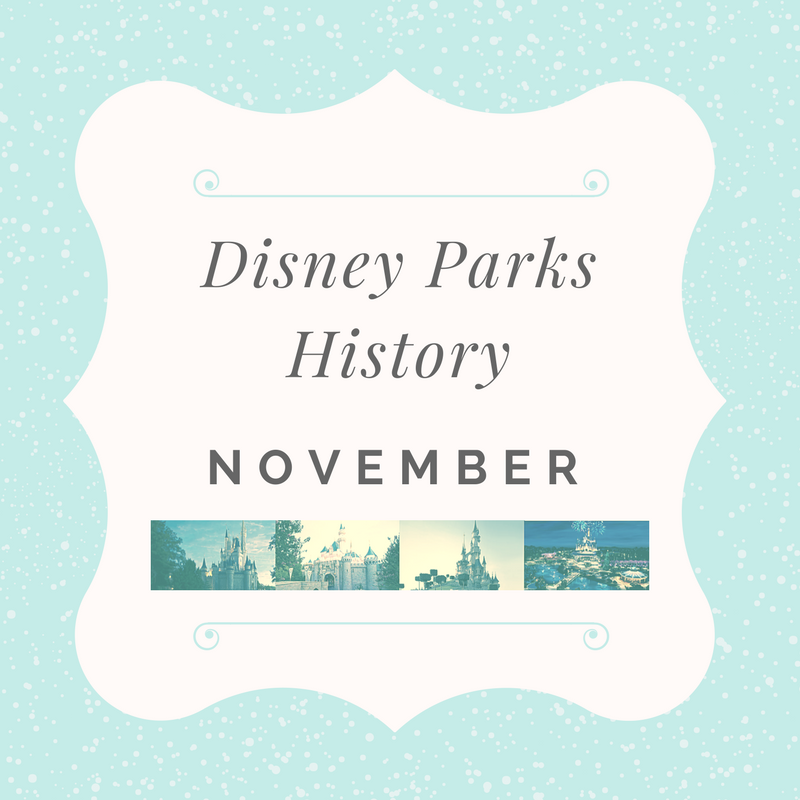 We’re back with the second monthly installment of Disney Parks History, and this time, it’s all about November. If you missed October, you can check it out here. So, what interesting tidbits of information did I dig up for November? Keep on reading to find out!

1965: Walt and Roy Disney held the first press conference announcing plans to expand into Florida. For nearly two years leading up to the conference, they purchased land in the Orlando area under various aliases to keep their plans a secret. By not drawing attention to themselves, they were able to secure the land for a great price and prevent others from building on or around the land they wanted.

1990: Yacht & Beach Club Resort launched into the spotlight when it opened 27 years ago, giving guests a New-England style-resort option and one of the best pools on property. Check out this Disney Parks Blog post that has construction pictures of the resort. 1991: Coinciding with the release of the animated classic, Beauty and the Beast Live on Stage premiered at what was then called Disney-MGM Studios, now known as Disney’s Hollywood Studios.

1994: Construction on the All-Star Music Resort neared completion, and guests were finally able to stay in some of the finished sections.

1996: The Main Street Electrical parade ended its first stint at Disneyland. After making its rounds to other Disney parks over the next twenty years, it would return to Disneyland in 2017 for a few months before retiring again.

2003: To celebrate Mickey Mouse’s 75th anniversary, 75 Mickey statues were unveiled at Walt Disney World. The statues were later auctioned off to raise money for charity.

2004: Stitch’s Great Escape opened at Magic Kingdom. To commemorate the day, Cinderella Castle was covered in toilet paper and graffiti. No, I’m not making that up. Check out number 3!

2006: Another Finding Nemo Attraction, The Seas with Nemo and Friends, debuted at Epcot.

2015: The Osborne Family Spectacle of Dancing Lights started its final run at Disney’s Hollywood Studios after 20 years of holiday displays.

2016: Disney got in the holiday spirit with the debut of new holiday festivities: Jingle Bell, Jingle BAM! at Disney’s Hollywood Studios, the Christmas Tree Trail in Disney Springs, Mickey’s Most Merriest Celebration (Mickey’s Most Mumble Mumble Celebration as Julia affectionately calls it) at Magic Kingdom, and Festival of the Holidays at Disney’s California Adventure.

2016: A new projection show on Cinderella Castle, Once Upon a Time, replaced Celebrate the Magic at Magic Kingdom. If you haven’t seen it yet, you can check it out here:

2016: Remember this one? Disney announced cabanas would be available for rent at Magic Kingdom (and other parks to follow) for the rock bottom price of $650 per day. That lasted only a few months until they were discontinued in January.

That’s all we have this month. See you next month for December’s update!