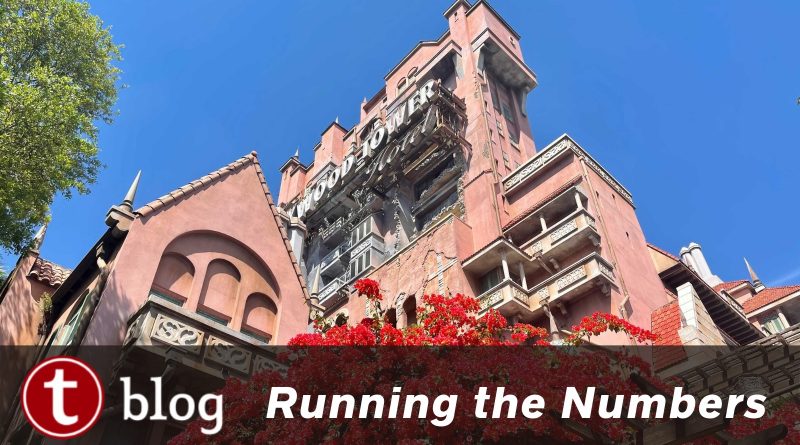 Disney hasn’t said how many Park Passes are available for each day and park. Disney says they are (still) operating at 35% of capacity, but hasn’t defined what each park’s capacity is. With each park having different offerings and being different in size, we don’t know the absolute number of Park Passes per park. We’re pretty sure it’s based on these factors at least:

Annual passholders can hold 3 Park Pass reservations at any time. The other two groups can make Park Reservations for as many days as they have tickets for.

We use these abbreviations for Resort Guests, Annual Passholders, and Date-Specific Ticket Holders: 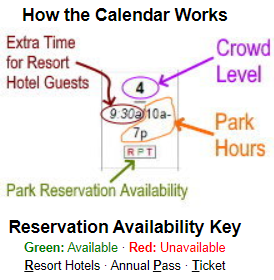 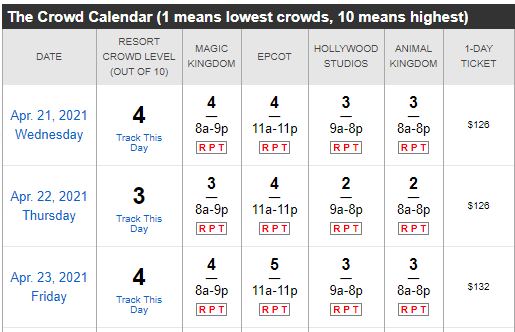 On the daily Crowd Level pages, the date when Park Pass reservation availability last changed is listed for each park. 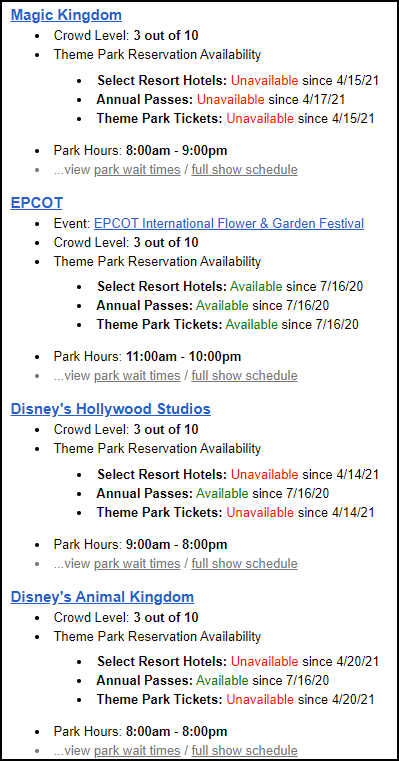 Park Pass availability can change at any time. We check availability about once an hour. (You can check it yourself here: https://disneyworld.disney.go.com/availability-calendar.)

Sometimes, a park that shows no availability one day will have availability the next day.  This can happen for multiple reasons:

The table below shows the percentage of days between January 1, 2021, and April 21, 2021, where a park’s passes showed as “unavailable” at some point, then switched back to “available” later:

So, for example, for all days in 2021 where the Magic Kingdom showed no park pass availability, reservations were later available for those parks about 43% of the time.

Here’s an example of 5 changes to Hollywood Studios’ Park Pass reservation availability for March 15, 2021, and the dates on which they changed:

The charts below show the number of days in advance that Park Passes reservations were unavailable for the last time. For the example above, Hollywood Studios Park Passes were not available as of February 24, 2021, nineteen days prior to March 15, 2021.

If you’re waiting for reservations to open up for your trip dates, keep checking!  Disney’s constantly adjusting park availability, and it’s entirely possible that park capacity will increase this summer. While no one can say for sure that a Park Pass will become available for your desired date and park, odds are better than average that availability will change leading up to a future trip. On the other hand, if you have an upcoming trip and haven’t secured your Park Pass reservations, it is in your best interest to do so, that way you have one less thing to worry about on your vacation checklist.

Have any questions about Park Pass availability? Let us know in the comments.

7 thoughts on “Never Give Up, Never Surrender: Park Pass Availability at WDW”