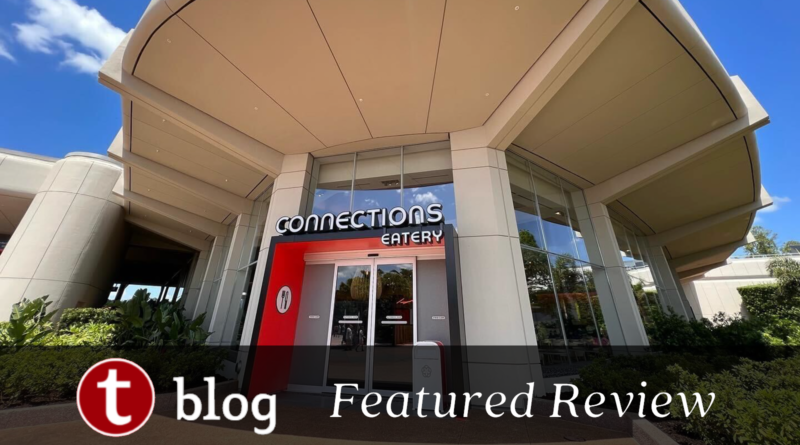 Located across the breezeway from Club Cool, and between Spaceship Earth and Guardians of the Galaxy: Cosmic Rewind, Connections is home to TWO dining experiences: a quick-service restaurant and the park’s new Starbucks location. 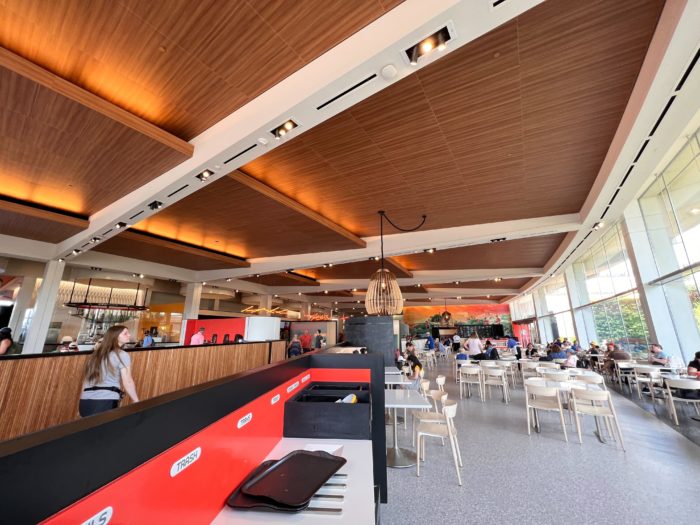 In keeping with EPCOT’s global theme, Connections offers fast-casual dining inspired by flavors from around the world. We’re talking pizza, burgers, salads, and sweets, but with an international flair.

The restaurant itself is super spacious with massive floor-to-ceiling windows and tons of various seating areas. The decor is minimalistic and modern with colorful murals and displays reflecting dining from all around the world. 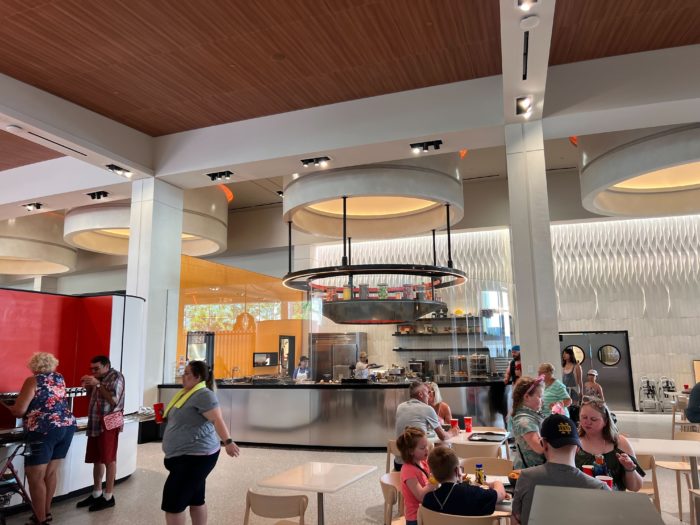 Connections also has the coolest nod to Walt Disney’s original vision for EPCOT. The floor designs are actually Walt’s site plans for his “Florida Project”! 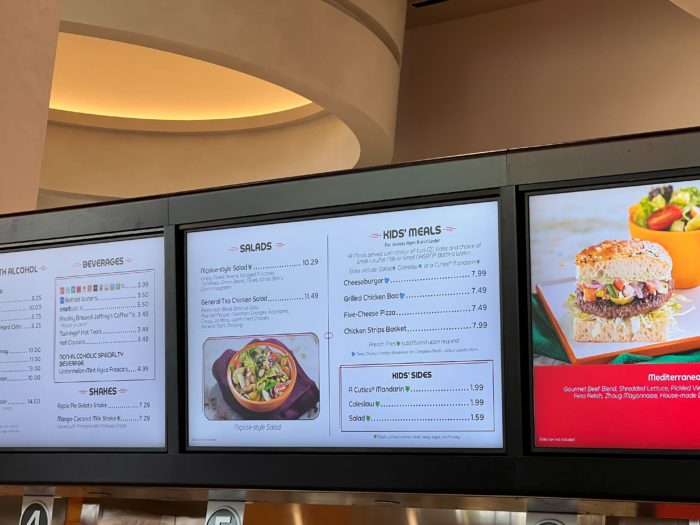 Even though Connections Cafe & Eatery officially opened today, this dining destination soft-opened early and our park reporter Chrissy was able to sample the menu (but not the Starbucks) in advance! 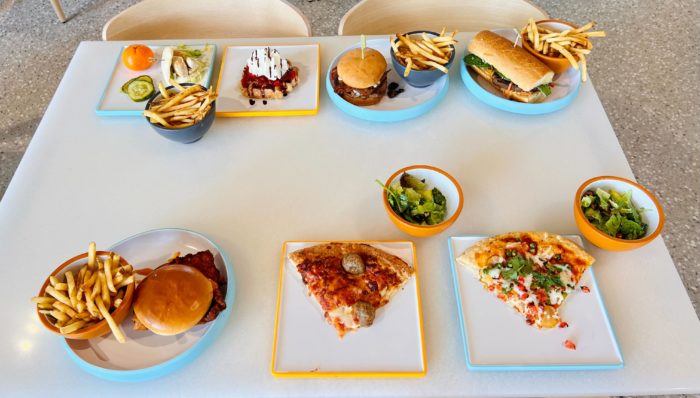 Here’s what she tried and what she recommends! 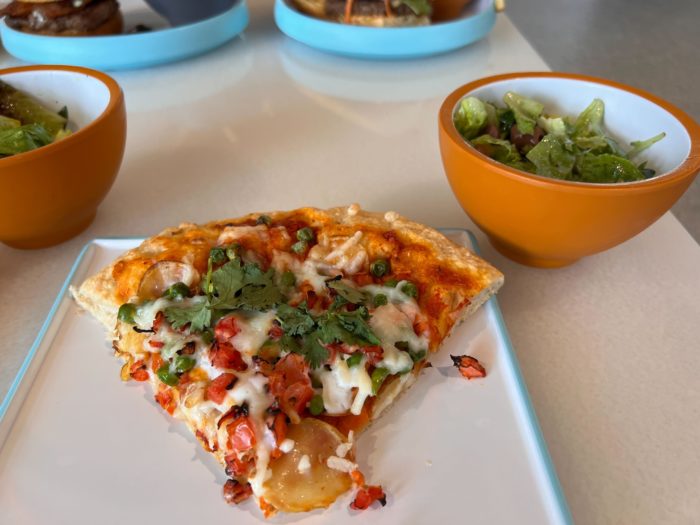 The menu described this one as Tikka Masala, carrot, potato, peas, tomato, plant-based mozzarella, and lime “yogurt” and comes with a Mediterranean side salad.

Chrissy approved of the Mediterranean salad because everything is better with olives. However, in regard to spiciness, the pizza didn’t leave up to its name. While it’s not bad for herbivores, it was more of just a hint of Tikka Masala and not going to satisfy your craving for Indian food. 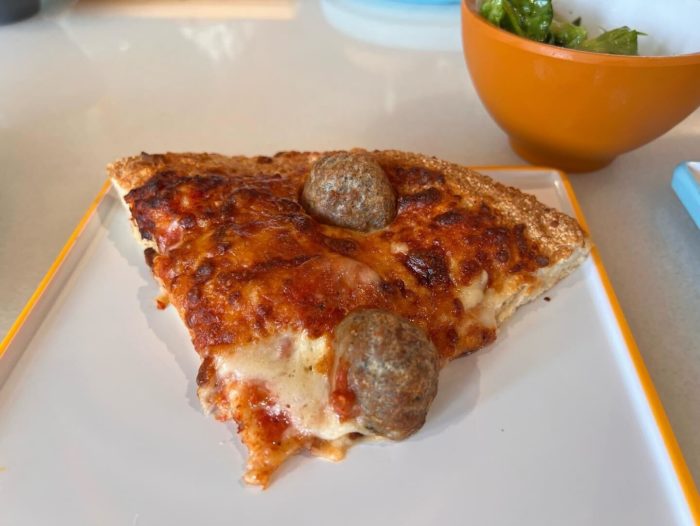 Sadly, this one is skippable. The meatballs were tough and just not great. 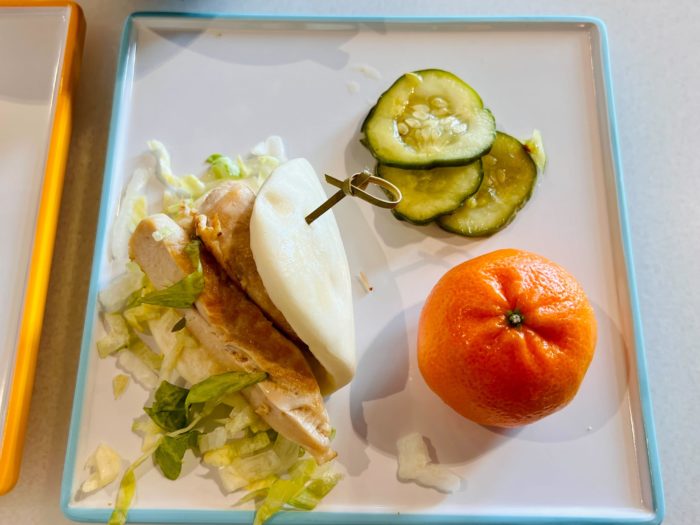 Served with a choice of two sides and either a small low-fat milk or a mini DASANI bottled water, the chicken bao was soft and lovely but the chicken was miles past done.

Still, Chrissy noted that Connections wasn’t officially open when she tried this one, so it’s on her list to try again. 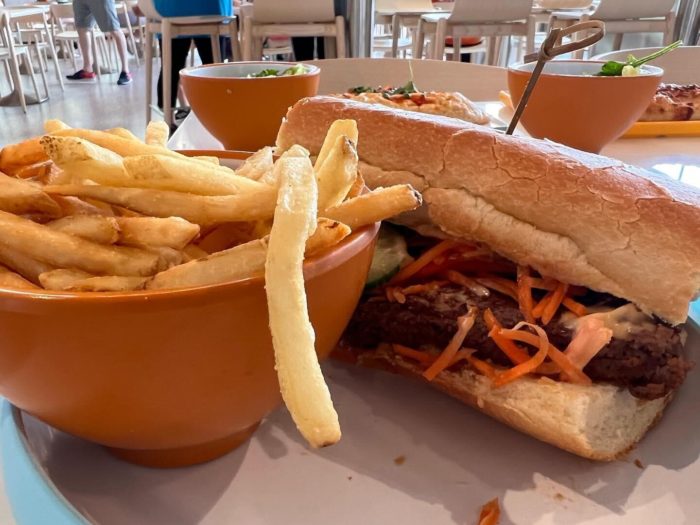 Yet another bummer. Served on a soft sub roll, this burger consisted of a miso-marinated gourmet beef blend, pickled veggies, and sriracha mayo; but it failed to deliver the kick.

This is one she’ll be trying again, just in case it was the result of the kitchen staff learning the ropes. 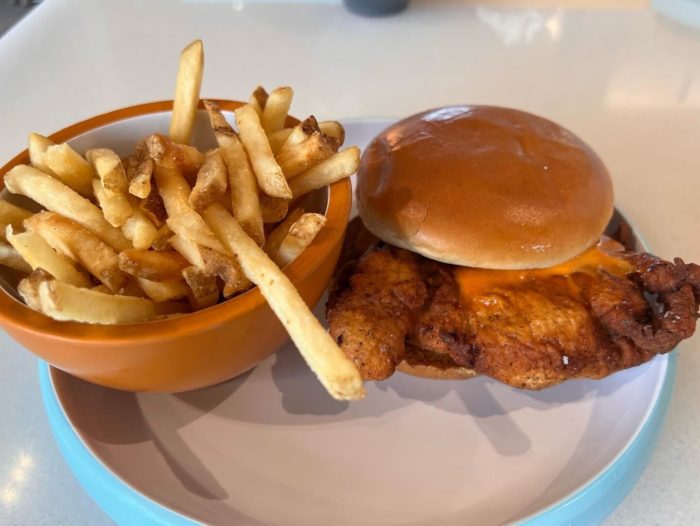 First of all, anything served with house-made pickles and a signature sauce is worthy of our attention; and thankfully, the chicken was juicy with a fantastic breading. Also, that sauce was chef’s kiss.

For those hesitant about the sauce, just ask for it on the side. As for Chrissy, she says she’ll be asking for extra next time. 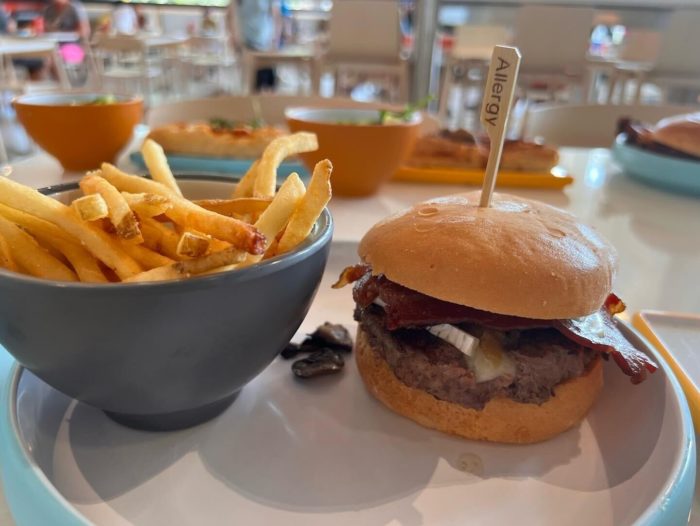 First of all, how the kitchen handled this was fantastic. A chef actually came out to discuss gluten-friendly needs and the burger was served covered and on its own tray to prevent cross-contamination! Huge props.

However, the burger itself – which comes with a gourmet beef blend, caramelized onions, bacon, brie, mushrooms, and a dijon mayo – was far from impressive. It was just over mixed and tough. 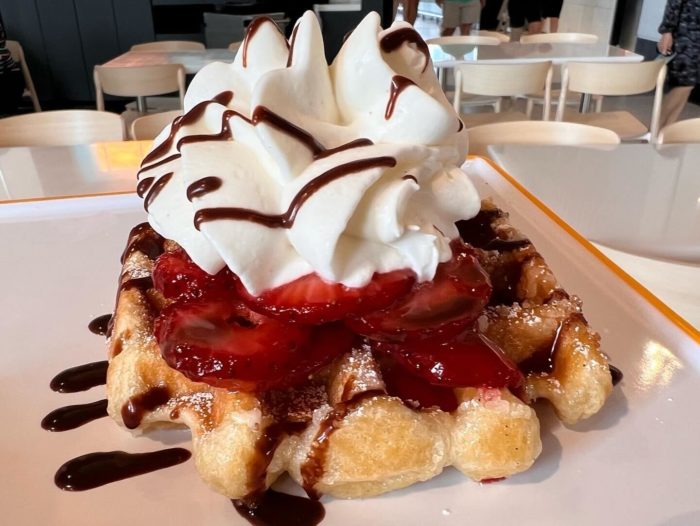 According to Chrissy, this pearl sugared-sweet treat was top to bottom joy! Was she swayed by the enormous amounts of butter she saw them use to make the waffles? Maybe. But who can blame her, right?

We will be back to try all of our “skips” again soon; but in the meantime, if you’re looking to visit Connections Cafe & Eatery in the near future, get the chicken sandwich and that pearl sugared waffle!

Have you been to Connections Eatery yet? What did you love? Let us know in the comments!