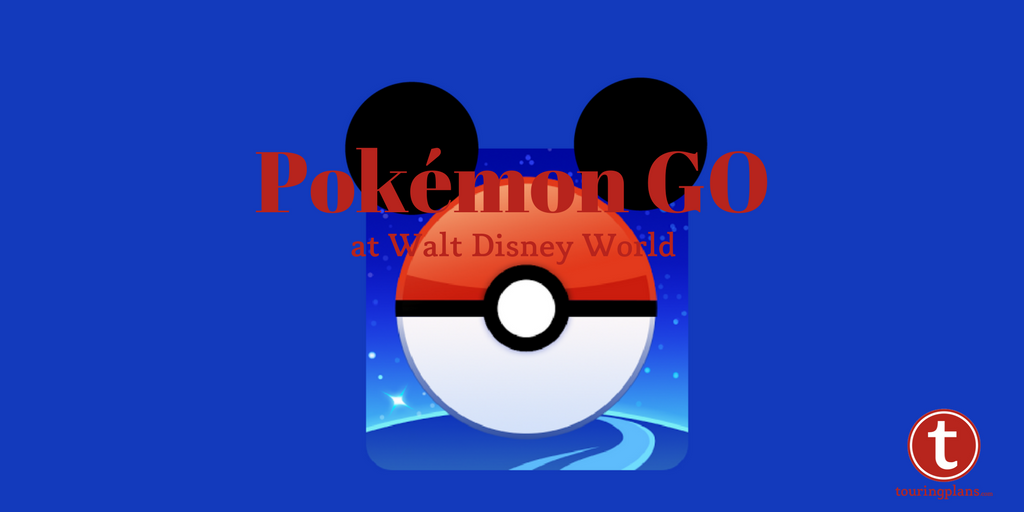 With the highly anticipated release of Pokémon GO Generation 2, Pokémon trainers are on the move again, looking to “catch ’em all” and walking miles in the hopes of hatching a rare Pokémon from an egg. One local secret is that Walt Disney World is an excellent place to play Pokémon GO. Here’s some tips to help improve your Pokémon GO experience at Walt Disney World.

What is Pokémon GO? Pokémon GO is an app available on iPhone and Android devices that lets you “catch” cute creatures, called Pokémon, in real world locations. Players, called Pokémon trainers, hunt for Pokémon, battle in virtual gyms, walk distances of 2-10 km to hatch “eggs” within the game, and collect objects needed in the game from Pokéstops, GPS-identified landmarks.

Who on Earth is Playing at Walt Disney World?

With the high prices to get through the gates at Walt Disney World, it’s hard to imagine that people would take time out of their park day to hunt Pokémon. Many Pokémon trainers that you’ll see at Walt Disney World are locals who enjoy the ability to play the game in a beautiful and easy-to-walk-around location. But there are also many other people who play Pokémon GO on their vacation. You’ll especially see people playing while sitting around before parades or fireworks or while waiting in lines.

Although the game itself doesn’t have a posted list of rules and etiquette aside from cautions to be aware of your surroundings and not to venture onto private property, there are some unwritten rules for Pokémon players at Walt Disney World that expand upon these.

Where to Find Pokémon, Pokéstops, and Gyms

There are an abundance of Pokéstops and gyms at the theme parks, water parks, resort hotels, and Disney Springs, and Pokémon spawn all over Walt Disney World. Overall, the best spawns seem to happen in the Magic Kingdom because many players activate lures at the Pokéstops to increase the number of Pokémon that spawn. (A lure on a Pokéstop provides a new spawn every 5 minutes, and given how close many Pokéstops are to each other, it is possible to have dozens of spawns per hour from one fixed location.) Because of the large number of players in theme parks, gyms turn over very quickly, which makes it easier to win battles, facing off against only one or two tough Pokémon. For more of a challenge, gyms at resort hotels can have more levels, but still are relatively easy to take down.

If you’re looking for a more relaxed environment to catch Pokémon without dodging crowds, resort hotels are your best bet. A resort hotel will usually have a half dozen or more Pokéstops, a gym or two, and have a good mix of common and intermediate spawns, with the occasional rare spawn.

One interesting tidbit about Pokémon GO is that the images used with Pokéstops do not get update frequently. At Disney Springs, you’ll still find a Pokéstop for Pleasure Island or at Disney’s Hollywood Studios, you’ll see some featuring images from The Streets of America. It is like a miniature time capsule to see how many things have changed in recent years.

Tricks for Getting Mileage at Walt Disney World

One of the more challenging aspects of Pokémon GO is getting enough mileage to hatch different types of eggs. One trick that I’ve found is that some modes of transportation around Walt Disney World move slow enough to count as walking and provide mileage towards hatching eggs, plus have the ability to use Wi-Fi or have cell service necessary to track progress. They include:

If you’re looking to put on mileage the old-fashioned way, the walking trail from Disney’s Hollywood Studios to Epcot, the boardwalk path around Crescent Lake, the path between the Transportation and Ticket Center and the Grand Floridian (by way of the Polynesian), anywhere around Disney Springs, and the walking trail around Art of Animation and Pop Century are great places for an easy walk to add mileage. Naturally, Epcot is the best in-park experience for walking the most distance, along with Animal Kingdom (if you are willing to make a few laps). You won’t get much mileage at Disney’s Hollywood Studios, and trying to power walk through the Magic Kingdom tends to be more trouble than it is worth.

For visitors from overseas, it may come as a disappointment to hear that Niantic doesn’t consider Orlando to be part of North America, so the North American Gen 1-exclusive Pokémon, Tauros, does not spawn in this area. To catch a Tauros, you’ll need to go farther north–to places like Daytona Beach on the east coast, or Ocala towards the center of the state.

But rare collectors from North America and abroad, rejoice! In Gen 2, Heracross is a region-specific Pokémon that is only available to Central and South America. By Pokémon standards, that also means central Florida, and I can personally confirm catching a Heracross at Walt Disney World (at the Beach Club resort, specifically). In addition, the tropical Corsola also spawns in the area, however I’ve not been able to find one at Walt Disney World–yet.

Aside from that, Mr. Mime, Kangaskhan, and Farfetch’d cannot be caught in the Orlando area (or anywhere in North America), but you can often find them placed into gyms by people vacationing to Walt Disney World. So if you are willing to fill in your Pokédex with ones you can’t catch locally by having them recorded as seen, keep clicking on gyms. You never know what you’ll find.

Where Else Do the Locals Go?

If your plans include a trip on a Disney cruise, the area around the cruise terminal does have some unique spawns. Getting to them can be tricky, however, so be mindful of your surroundings when attempting to go to a particular Pokéstop.

One final note — if you are looking for a short day trip to a main hangout for Pokémon GO players, head down to Kissimmee Lakefront Park. Less than a half hour from Walt Disney World, this beautiful and expansive park often provides rare spawns, an abundance of players, and many active lures throughout the day. If hunting Pokémon is part of your vacation plans, it is worth the trip down, day or night.

Anyone else play Pokémon GO at Walt Disney World? Ever caught anything impressive? Got any tips or tricks of your own? Let us know in the comments.