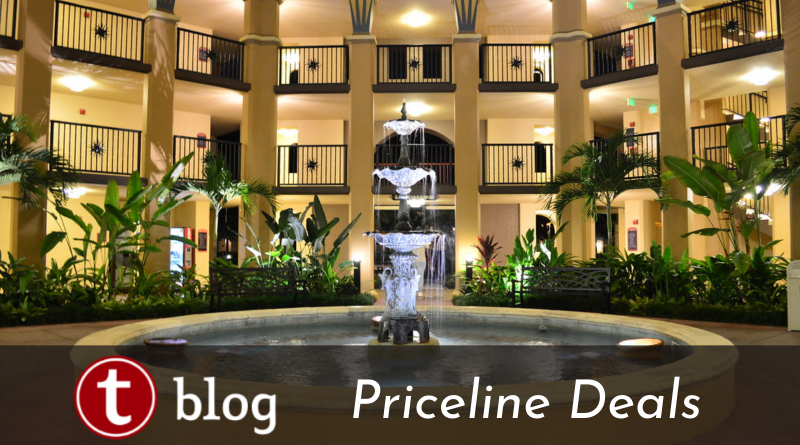 As the the first stirring of Spring deals emerge from winter’s frigid peril, Priceline Express has also risen from it’s hidden lair and yawped CORONADO! to the world.

(Also: I think I need to go outside a bit more.)

If you haven’t been keeping track, the last time we saw a nice group of Disney resort deals drop on Priceline Express was way back in November. Today, Priceline dropped April deals for Coronado Springs, All-Star Movies, Pop Century, plus some odd days of Caribbean Beach, and a rare day or two of Yacht Club and the Grand Floridian.

There is a little overlap with Hotwire’s April deals on the days that have Express Deals for Coronado, Movies, and Pop – but you’ll probably notice that the Hotwire deals seem to have better pricing. Also, this Priceline drop is a little more confusing than usual: there are some days where the hidden deals are either the same or higher than Disney’s own discounts. This appears more likely in the Movies deals than any others, but some of the Coronado deals may also need to be checked for their deali-ness levels.

Most of the Coronado rates range from $132 to $160, but during Easter week they jump up as high as $257 per night. That is some high hidden deal pricing for a moderate resort. (In fairness, Disney doesn’t even seem to have standard rate rooms available during that week.)

The takeaway is, as I’ve said many times before, when looking to book these deals always take a few minutes to compare the all-in hidden deal costs including all fees and taxes to Disney’s own rates. I’ll include the usual smattering of comparison tables below, but they are only for a sample of days and may not provide the full picture for all deals.

First: So Not A Deal

Before we get into the calendar of deals, I’d like to run through an example of how the Caribbean Beach hidden deals are just not worthy. So unworthy, in fact, I didn’t even bother including them or a few others on the calendar. Let’s say we search for some dates and see a 3.5-star, 8-guest rated resort with 300 reviews in the results.

Caribbean Beach is the only resort in Bonnet Creek with all of those ratings and review count, so this $228 deal has to be it. Coronado Springs also happens to have the same ratings, but the review count is in the 500s. You’ll find when you click on the Carribbean deal those little boxes will pop up below – including another very likely Coronado deal.

Now, 24% off sounds like a pretty nice discount – in fact in my previous Hotwire posts I warned people to look for deals higher than 10% off because Hotwire or Priceline fees can eat up that smaller discount.

But what happens when we go to book this Caribbean Beach deal?

The room options on this one happen to be clearer than most deals: we can choose either a Standard or a Water View room. After the usual taxes and Priceline fees, that $228 room ends up costing almost $276 per night.

When I surfed over to Disney’s site, I found that these Standard rooms were hard to find for booking, but Pirate Standard rooms are available. Disney’s available rooms and the room types in hidden deal room blocks don’t always line up, so we can’t read too much into this. But, when I compare the pricing of those standard Pirate rooms, this $228 deal isn’t great.

On Priceline we’d be booking a non-refundable room that would save us about $6.40 over Disney’s current discounts. If you have an annual pass, you’d be losing almost $32 on the deal! I don’t know about you, but if I’m booking something non-refundable, I want it to be saving more me more cashola than that.

Now, moving along as I have some afternoon yawping to do: Below are some examples of hidden deals for each resort. Plus I have another tip I have pulled from the depths of previous posts: to get some of these Coronado Springs deals to appear, you may need to click on a non-worthy Caribbean Beach deal – then it will appear as an additional one below. The same goes for one of the Value resorts: Sometimes you will see a single 3-star resort in Bonnet Creek. Clickety-click on that deal and you will see another. Today it seemed liked All-Star Movies (3-star, 7-guest, 300 reviews) would appear in the results, then Pop Century (3-star, 8-guest) would pop up after a click.

Here are some rate comparisons to see how some of these deals pan out. Anything that is a (negative number) in the Difference column means that the hidden deal costs more than the Disney discount. (As you can see in the CBR example above – the annual pass rate is better than Priceline’s.) Just because some of these examples are not great deals does not mean others are not, I just wanted to include both good and bad deals here for reference. Many, if not most of the hidden deals will likely save you money.

Over on Hotwire deals you really want their hidden deals to be more than 11% off. Over here on Priceline Express you can’t rely on a particular % cutoff as much. I suggest break out your favorite spreadsheet or napkin and math it up.

To help you seek out these deals, use the examples above and calendar below to identify the hidden resorts. The Calendar of Deals is your friend. 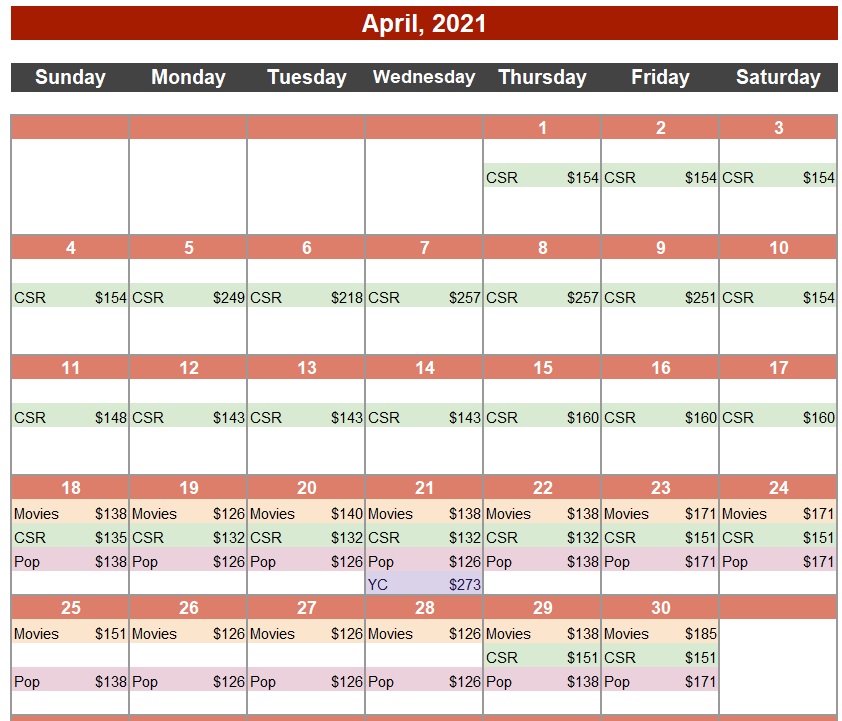 Go figure, I have a couple of more things you might find useful! You may see some ghost deals out there and I didn’t want you to get too excited. Priceline can be weird.

For example, I saw the specter of Port Orleans French Quarter in one deal this afternoon. It happens to be the only 3.5-star, 9-guest rated resort in Disney Springs, so was easily identifiable. But, friends: it ain’t open.

According to Disney’s resort reference page, it doesn’t even have an expected reopening date set yet! Happily, if you try to click on it to book, you’ll probably just get a “Sorry! you missed it!” error. 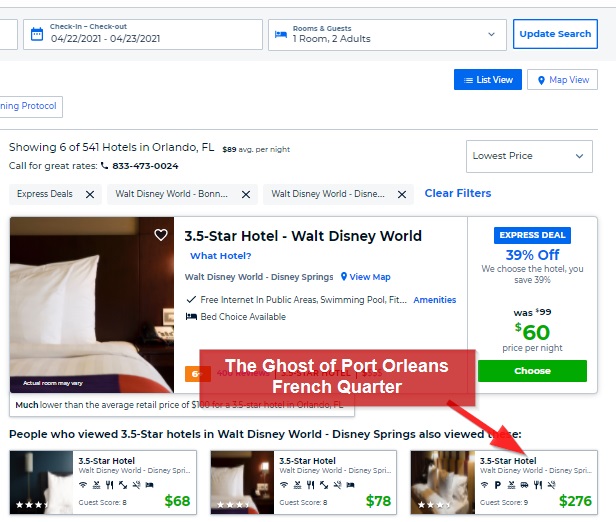 On the plus side, I as I mentioned way up top in this post, I did see a rare Grand Floridan deal go by. It wasn’t a fantastic savings, but it was a little less than Disney’s prices.

If you’ve found any other good deals on Priceline Express, or just want to add your own Yawp! to the world, let us know in the comments!

7 thoughts on “Priceline Deals for April Can Thaw a Frozen Heart?”