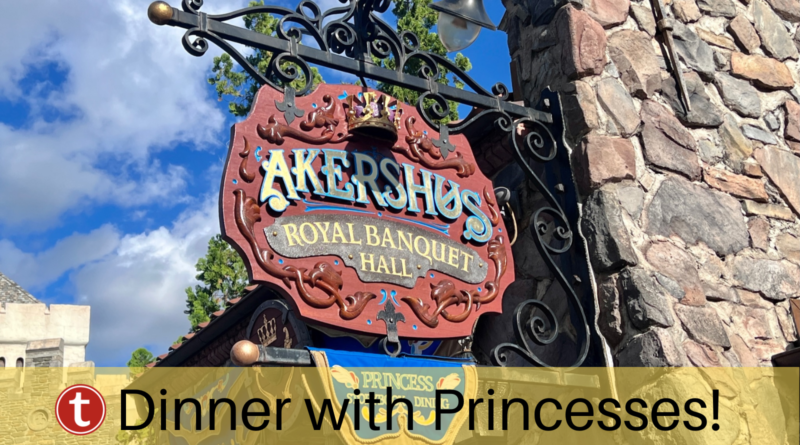 Character dining returned yesterday to EPCOT’s Restaurant Akershus at the Norway pavilion, and our own Christina Harrison was there for an early review.  Her verdict?  Akershus is a win.  You’d pay a lot more for Lightning Lane to see these princesses.  Read on for the details.

Restaurant Akershus is inside the Norway Pavilion in EPCOT’s World Showcase.  For now, Restaurant Akershus is open for dinner starting at 4:15 p.m.   The last dinner seating reservation starts at 8:05 p.m.  You’ll be allowed to finish your dinner, unrushed, even if you’re there after EPCOT closes.

Dinner at Restaurant Akershus costs $63 for guests ages 10 and up, and $43 for kids ages 3 to 9, not including tax and gratuity.

With tax and 20% gratuity, Restaurant Akershus costs around $80 per adult and $55 per child.

How Do Readers Rate Restaurant Akershus?

For context, the average thumbs-up rating for all Walt Disney World restaurants is around 88%.  So before re-opening, families rated Restaurant Akershus as Below Average.

Checking In at Restaurant Akershus

For now, you can’t check in at Restaurant Akershus using the My Disney Experience app.  Instead, you’ll check in at the entrance to Norway Pavilion. They won’t check you in unless all members of your party are present. Disney will text you when your table is ready and you’ll get the green “ready” message on MDE.

Dining is “family-style” at Restaurant Akershus, not a buffet.  This means plates of food will be brought to your table, containing everything on the menu.  You’re free to ask for more of anything, and you can eat as much as you care to.

What Princesses Are Available at Restaurant Akershus?

We saw Belle, Aurora, Snow White, Jasmine, and Ariel, during our dinner at Akershus.

You’ll hear musical fanfare before each princess enters the hall. The music will correspond to the princess.  For example, Snow White entered to “Whistle While You Work”.  Here’s Snow White’s entrance:

During our dinner, all five princesses came out within 5 to 9 minutes of each other. This means that when the first one gets to you, they will all be there in pretty rapid succession. This is wayyy better than  our visits last month to Crystal Palace and Ohana, where we had 25-40 minutes between characters. And far better than Cape May last month where two of the characters didn’t even stop at our table.

Christina says she didn’t want to take up too much of the princess’ time, but she never felt rushed like she did at Crystal Palace breakfast. Each princess stops for pictures, video, and a little chat. The only interruption was that the princess promenade started while Jasmine was talking to us.  And Jasmine returned immediately after to us, so that was great.

One note about the princess promenade – lots of little ones didn’t understand that the princesses had to keep moving,  so they would jump up and run for hugs. It’s kind of adorable and the princesses managed it well.

What’s on the Menu at Restaurant Akershus?

Guests will allergies will be able to specify those allergies at several points prior to eating:

Here’s a list of the allergies specifically referenced on Akershus’ menu:

The Cast Members we saw managed to handle all sorts of allergy/ preference issues. The table next to Chrissy had three little children with different needs – they got their mac and cheese on separate plates, mashed potatoes without gravy, and meatballs without sauce. Every picky eater stipulation that lives in a parents anxiety bank is covered, and Disney’s Cast Members know how to handle them.

Here’s a short overview of what we ate during our dinner visit:

Christina’s probably in the minority, but this was always one of her favorite places to eat. She says “I love a lutefisk-and-royalty moment. Anyone who loved it before will love it again even though it’s family style. The meatballs with lingonberry sauce are spectacular. I missed those flavors.”

Desserts are a highlight at Restaurant Akershus.  The texture of the rice cream is excellent. We also love that it’s a traditional Christmas dessert that usually has a blanched almond. Like the king cake during Mardi Gras, the person who gets the almond gets a prize. No almond here but the fact that it’s a celebratory cake translates. The chocolate lingonberry roulade is fabulous. It looks like it would be loaded with sugar but it’s very mellow and rich. Not too sweet. Plus, they’re both ENORMOUS desserts.

I’ve been to the real Akershus Castle in Oslo, Norway, which started construction in 1299 (shortly before TRON, for those of you keeping track).  Disney’s version is accurate in a lot of ways: For one thing, arched doorways are found all over the real Akershus castle (mostly outside, but some inside).  Here’s an interior view of Disney’s Restaurant Akershus:

And here’s the real Akershus Castle (via TripAdvisor):

And this is similar wallpaper in the real castle (TripAdvisor):

Disney’s use of wall tapestry is also true to the real Akershus Castle. Here’s Disney’s:

And here’s one of the tapestry you’d see in the real castle (TripAdvisor):

The one big difference that I can see is in the floors: Disney’s Restaurant Akershus uses tiles, while the real Akershus Castle would probably have stone or wood floors, depending on the room you’re in.

Is Restaurant Akershus Worth It?

We think it is. For one thing, you’ll meet princesses at Akershus a lot faster than at other character greeting locations like Crystal Palace or ‘Ohaha.  If you were going to buy Disney’s Genie+ service primarily to meet princesses –and– you were going to eat a sit-down dinner anyway, this might be the cheapest way to do that.  Also, the menu at Akershus is designed to appeal to as many people as possible – lots of people like turkey, mashed potatoes, bread, and green beans.  So there’s a lot to like here.