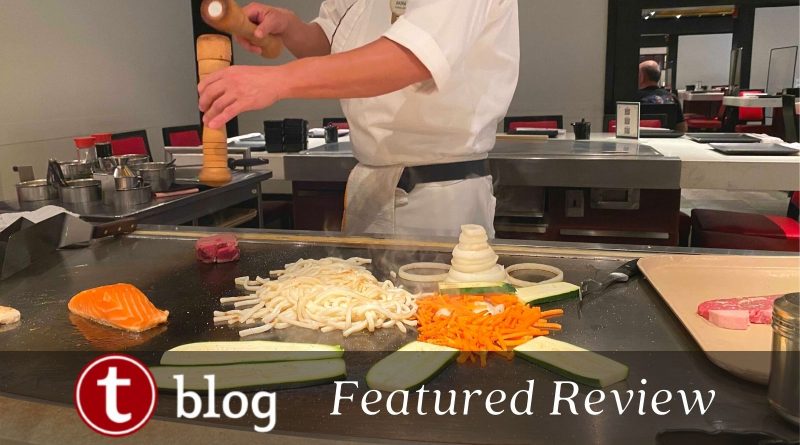 Communal teppanyaki dining doesn’t sound too appealing right now does it? Teppan Edo at EPCOT’s Japan Pavilion has made some adjustments to continue its tradition of entertaining dining, with safety in mind. This table service restaurant is one of the highest rated on Disney property and Chrissy on our team visited this week to see how they are doing things differently with a focus on safety.

Now, it is true that many neighborhoods around the country may have their own teppanyaki style restaurant. But what makes Teppan Edo special and different than the average teppanyaki restaurant is the authentic atmosphere and the caring Cast Members. And the safety precautions that are implemented fall in line with the stringent standard that Disney has set.

Check-in has been moved to the greeter stand right when you come up the stairs or elevator. Previously, guests would walk inside to the left and check in at the Teppan Edo desk, but that usually meant a cluster of people. Your phone number is verified and a text is sent to you when your table is ready. This eliminates the usual gathering near the check-in area.

Parties are seated separately. Formerly, different parties would be seated together to fill up a table and seated at once. Chrissy dined on her own and was seated first. Then the Cast Member walked back to the check-in area and came back with two additional guests. Each table seats up to eight people. There is one divider at each table.

Chrissy had one side to herself, and the other party, of two people, were on the other side of the divider. The Cast Member held a basket with the usual hand wipes and encouraged each of us to take several. Forks were also delivered on a covered basket. Each fork was under the napkin and was spaced out so that we could get our own and not touch anything else. There was a lot of thought and care put into this process. The star of the show, the Chef, had on a mask and protective goggles.

Food and Beverage at Teppan Edo

Come hungry when you dine here. The menu at Teppan Edo is pretty standard for a teppanyaki restaurant. You can start with some fresh sushi; Chrissy went with the Sushi Sampler. This is a great way to satisfy your craving for sushi with 2 pieces of spicy tuna and salmon roll, 2 pieces of California roll, and 3 pieces of nigiri.

The cocktail Chrissy ordered is a must for anyone wanting to make an impression, like on a date night, or just wanting something fun and different. The Shochu Squeeze is simple and crisp. What makes it unique is that you select either grapefruit, lemon, or orange juice, but you’re not given the juice – you make it! A tall glass of Shochu liquor and ice is presented to you with the fruit of your choosing sliced in half, and a juicer. Time to go to work and squeeze your own juice. The juicer was made of silicone which made for easy pouring. Shochu is usually distilled from Japanese sweet potatoes, barley, rice, and / or buckwheat. It is often compared to vodka. This fun drink is just $12.00 which is on the lower end of most Disney cocktails.

Now onto the first course. When you order your entrée you’re getting quite a lot of food. To start a pickled cucumber and seaweed salad, known as a Sunomono Salad is presented. This is different from previous visits at which a garden salad was offered. It was refreshing and crisp, though the texture of the seaweed may not appeal to everyone.

White rice accompanies your protein choice, such as chicken, steak, shrimp, or scallops. Some teppanyaki places offer fried rice, and Chrissy’s table mates asked if they could have fried rice. The Chef jokingly said they should go to the China pavilion for fried rice.

In addition to the white rice, you can carb up with the noodles and veggies that come standard with any meal. This included spinach, onions, carrots, and zucchini, again a variation from most American hibachi-style or teppanyaki restaurants.

The chicken and steak were seasoned and cooked perfectly, in lovely bite-site morsels. The Chef was very concerned about cooking the steak at the correct temperature for each guest.

Of course a meal at a teppanyaki restaurant would not be the same without the sauces. The standard ginger sauce and “yummy” white sauce are offered to each guest. You can also request hot sauce and extra wasabi if you like to heat things up.

The Entertaining Experience at Teppan Edo

Having your food cooked fresh in front of you on the grill is just one part of the experience. The other is that your Chef will entertain you.  Each Chef is going to be different, but there is usually some traditional and a bit of Disney presented at each table. Chrissy reports she could hear the wooden salt and pepper grinders bopping at other tables, and lots of laughing. If you’re celebrating a special occasion and the staff are aware chances are you’ll get a least some recognition from the Chef as part of the show.

Chrissy was able to use her 10% Annual Passholder discount for lunch here, and dined at 3:30 p.m. making it a good time for a late lunch or early dinner. With that discount in mind, the overall service, and the specialness of the drink and the venue, it was a great value.

We have over 500,000 surveys from our readers in recent years at Teppan Edo has a 93% thumbs up rating. It is ranked number 11 out of 106 table service restaurants at Walt Disney World.

Do you agree with this ranking of Teppan Edo? Let us know in the comments!

One thought on “REVIEW – Teppan Edo at EPCOT Brings Entertainment and Taste Together, Safely”