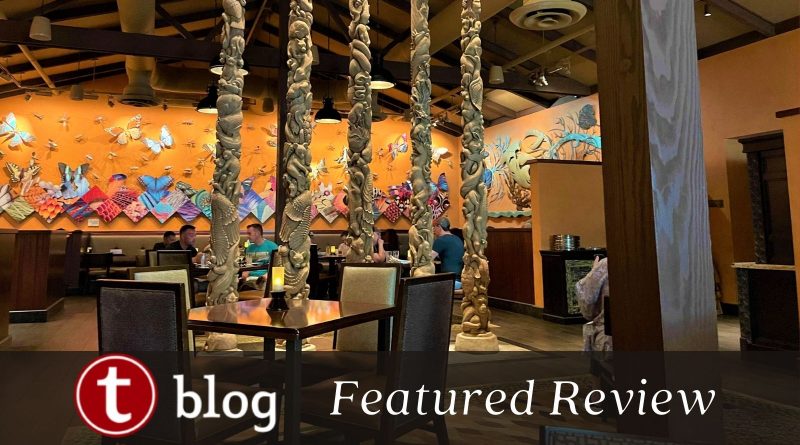 Disney’s Animal Kingdom is full of adventure. And while the focus may be on exploring the natural world, there are tributes to the beauty of travel as well. One such tribute is the table service restaurant Tiffins. This signature dining restaurant was once home to one of the most adventurous menus of Walt Disney World. The menu has been toned down just a little, but there’s still plenty of unique flavors to enjoy. Chrissy grabbed a same-day wait list spot and revisited this dining destination.

Tiffins is a table service restaurant that opened in 2016. It is located at Discovery Island near the entrance of Pandora – World of Avatar. There is a full service lounge right next to it, Nomad Lounge, making it a destination for many Disney fans to relax and imbibe during their day of discovery at Animal Kingdom. Both Nomad Lounge and Tiffins share a beautiful theme about the impact that traveling the world can have on one’s perspective. Joe Rohde, beloved and now-retired Disney Imagineer, had a heavy hand in designing the entire venue.

We have ratings and rankings for every Walt Disney World restaurant on our site and Lines app. According to our 500,000 subscribers, Tiffins has a 88% thumbs up rating and is ranked #43 out of 105 table service restaurants at Walt Disney World. The price is the biggest drawback. It is one of the priciest restaurants at any of the Disney World theme parks. Thankfully there is currently a 10% discount for Annual Passholders during all meal periods. Overall, Tiffins is a relaxing, soothing dining experience.

Here’s what Chrissy ordered at Tiffins:

The craft cocktails and extensive wine list add to the cache at Tiffins. The selection of cocktails, craft beer, and exquisite wines from around the world can be enjoyed both at Tiffins and Nomad Lounge. Chrissy selected the Lamu Libation which is a potent drink, but goes down easy. It is in the same spirit of tiki cocktails you might find at Disney’s Polynesian, sweet, tropical, and heavy on the rum.

The Tiffins Signature Bread Service pales in comparison to the bread service offered down the road at Sanaa at Disney’s Animal Kingdom Lodge, but it is still a great way to start your meal. (It is also available at Nomad Lounge.) There are three bread selections — a balance of crunchy, chewy, sweet, and savory breads and crackers. Three distinct dips are served as well. The ginger-pear chutney was Chrissy’s favorite (and it’s mine too). These strong flavors of warm spice are approachable even if you’re unfamiliar with Indian, Ethiopian, or Mediterranean tastes.

We as a team love to try charcuterie when it’s on the menu; this one is not on the regular menu but was presented as part of the specials menu. I’ve also seen it on the specials menu at Nomad Lounge. We’ve had lots of charcuterie lately and this paled in comparison to everything else Chrissy tasted at Tiffins. And, it is not as pleasing as other charcuterie plates found elsewhere at Walt Disney World. The venison pepperoni was interesting, but not exemplary. The Midnight Moon Cheese was the most interesting, firm and sweet and tangy.

The entrees at Tiffins are not for those who stick to comfort foods, though, the Shrimp and Grits or the Short Rib might be suitable for less adventurous diners. The Butter Chicken, which Chrissy selected, is also an option for those wanting to explore but not go overboard. The chicken itself was juicy and grilled perfectly. Chrissy wanted more of the chickpea-rice croquette and the butter chicken sauce. The English peas had the perfect pop and a bit of sweetness.

The first dessert Chrissy tried was originally a limited time offering, but has continued its reign on the menu. The Lion King did not claim the throne of the best dessert of the two Chrissy tried, but it still had its moments. The presentation is stunning and the strawberry mango sauce is delicious. There needs to be more of this sauce on the plate. Maybe ask for extra if you order it?

The other dessert, the South American Chocolate Ganache now ranks in the top 5 chocolate desserts Chrissy has enjoyed in the parks. It is rich, decadent, and the caramelized banana helps break up the dense, but delicious chocolate. Besides having great dessert, your meal at Tiffins ends with a complimentary souvenir: A square card with a travel or animal sketch by Joe Rohde is presented to you. It’s a lovely little touch.

Some things to keep in mind about Tiffins is that there is only indoor seating. Reservations can fill up quickly, so use our free Reservation Finder. Chrissy used the MyDisneyExperience app to check same day walk-up availability and was originally told a 45 minute wait, but then a minute later the text message updated to say ten minutes – thank goodness she was able to hustle over there in time.

Nomad Lounge offers a similar environment, and boasts a beautiful outdoor space, so if you’d prefer some drinks and appetizers rather than forking over the money for the full dining experience, popping into Nomad Lounge is a good choice. Both of these venues are lavish respites from a hot and humid day of exploring Animal Kingdom.

Personally, Tiffins is one of my favorite experiences at Walt Disney World. Though, it does hold a special place in my heart because on the day my husband proposed to me, in front of the Tree of Life, he then further surprised me with reservations at Tiffins. The server gushed over us for celebrating our engagement here. We enjoyed every bite and enjoyed the special atmosphere even more. We are hoping to return to Tiffins this year to celebrate our wedding anniversary.

Tiffins is a splurge, but if you are celebrating a special occasion at Animal Kingdom there really is no other venue in the park that can top it.

Have you ever dined at Tiffins? Tell us about your experience in the comments!

2 thoughts on “REVIEW – Tiffins Is Not As Adventurous As It Used to Be, But It Still Satisfies”