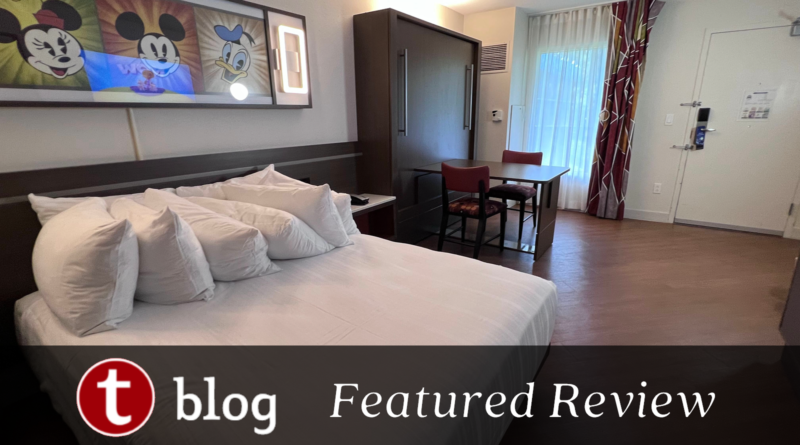 With over 20 resorts to choose from at Walt Disney World, choosing your home away from home can be a little overwhelming, especially if you’re in need of a wheelchair-accessible resort room and don’t know what to expect

For guests looking to book an accessible room at an on-property resort AND within a budget, there are a number of options!

Disney’s Value Resorts are the most affordable category of resort hotels at Walt Disney World, and they consist of Pop Century, Art of Animation, All-Star Sports, All-Star Music, and All-Star Movies.

While Pop Century and Art of Animation are newer in comparison to the All-Stars, the latter is often a bit cheaper and similar to one another in layout and design. 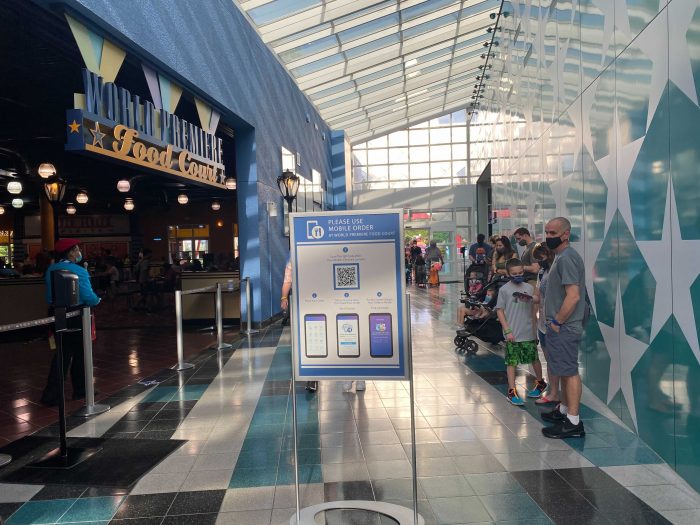 Our park reporter Chrissy recently checked out a wheelchair-accessible room at All-Star Movies to give guests an idea of how what to expect from this category of Disney resort hotels. Here’s what she found out! 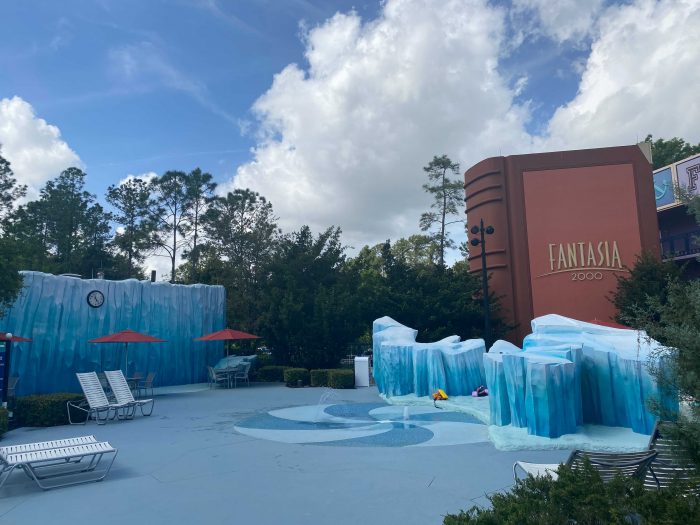 During her visit, Chrissy experienced Room 5818 located on the second floor of Building 5 and in the Fantasia-themed area of the resort. 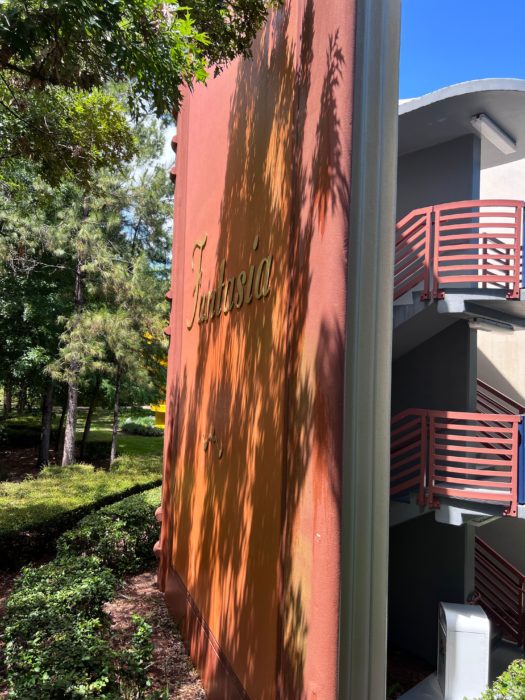 Now, even though this accessible room is located on the second floor, be aware that all buildings housing resort guest rooms have easy access to elevators. 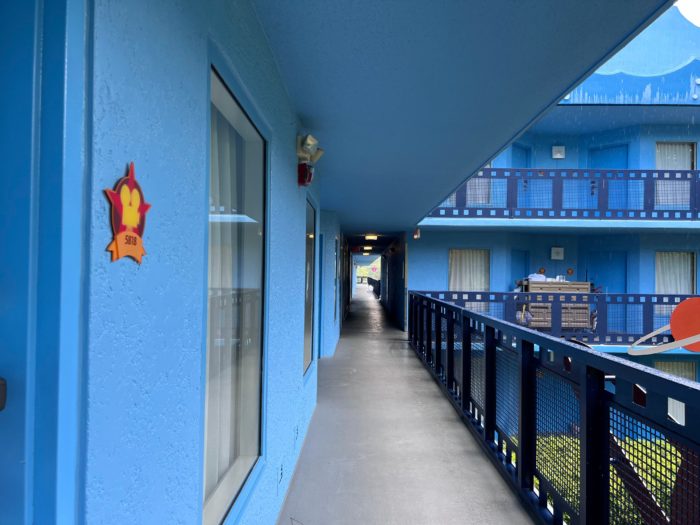 Chrissy found that it only took her two minutes and nineteen seconds to reach Cinema Hall (that lobby) and the World Premiere Food Court. 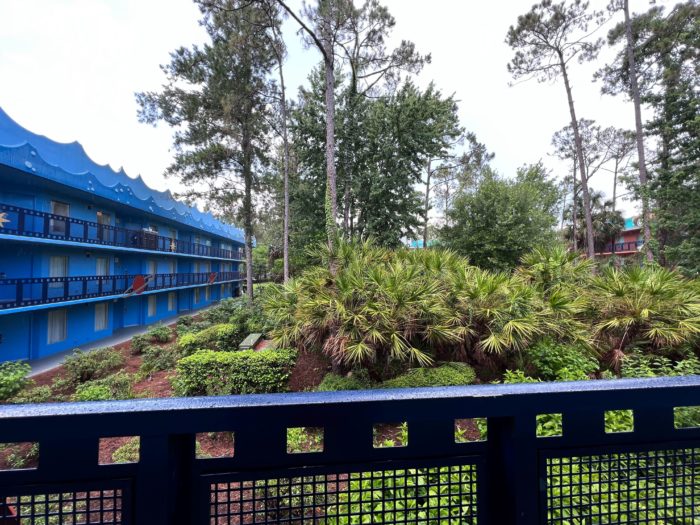 Let’s take a look inside Room 5818 at Disney’s All-Star Movies! 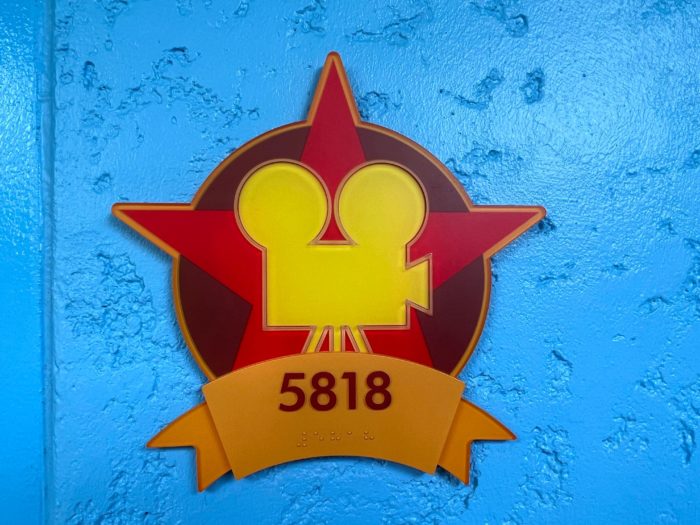 First of all, in addition to the key scanner, the room door offers an additional lock that’s easy to access from a wheelchair or ECV. 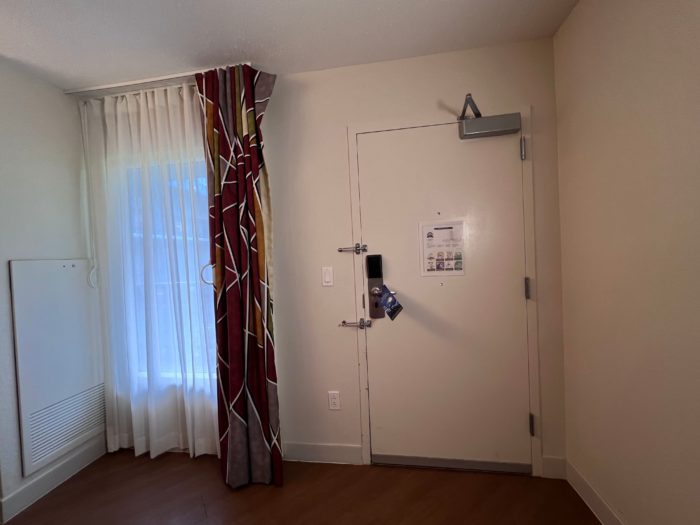 The curtains can also be closed by an easy-to-reach handle. 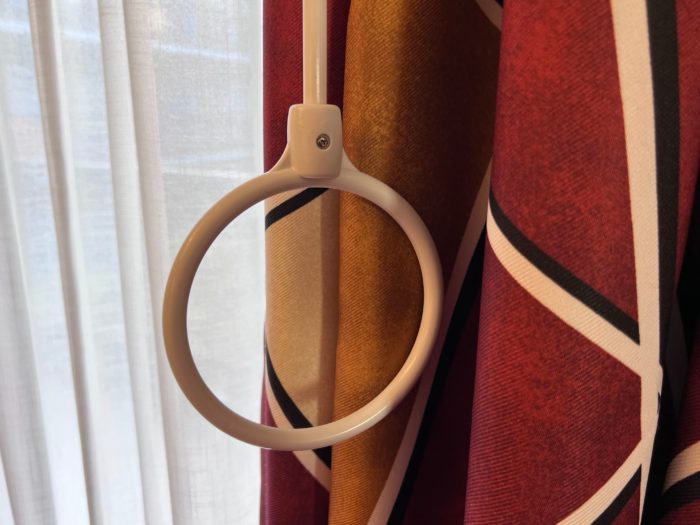 There’s a decent amount of space between the door and the room’s furnishings which include 1 queen bed and 1 queen-sized pull-down bed. 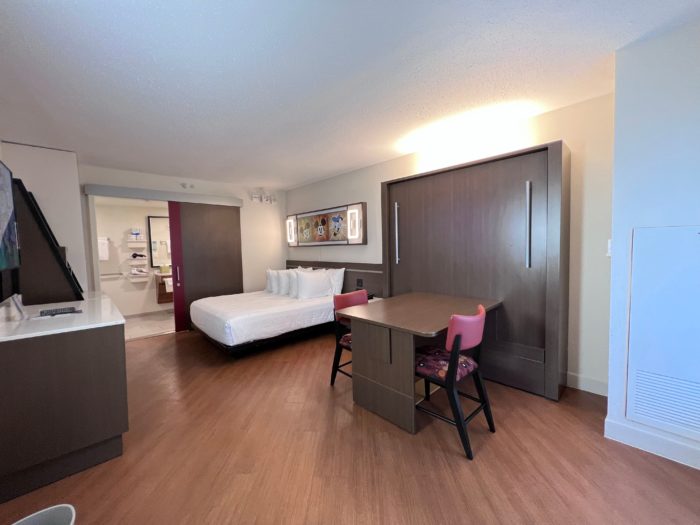 That pull-down bed is actually hiding behind the table and chairs. Pulling down on the two handles, and removing the chairs, allows the table to collapse and the bed to fold down. 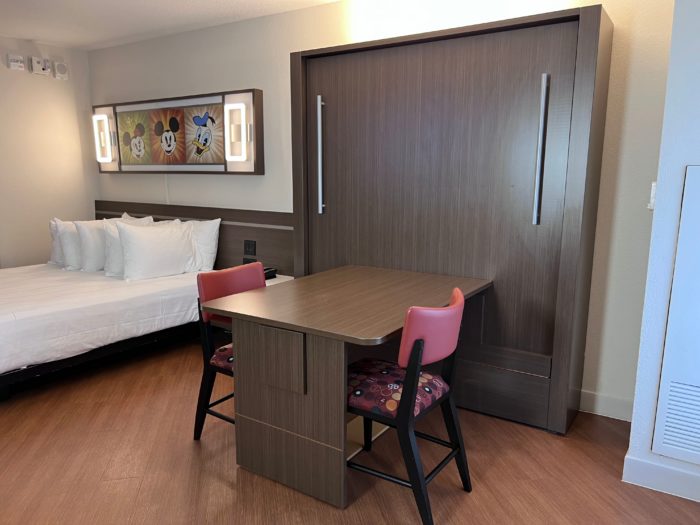 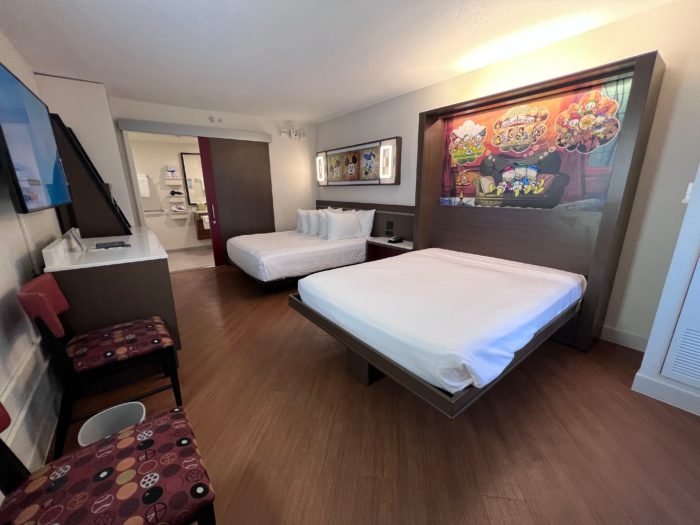 … as well as a peek at the All-Star Resorts-themed artwork hiding inside! 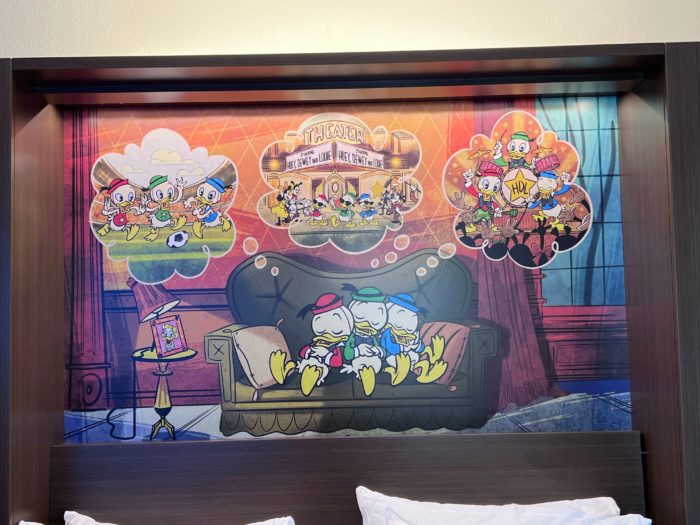 Here’s another view of the room and its size from a different perspective. 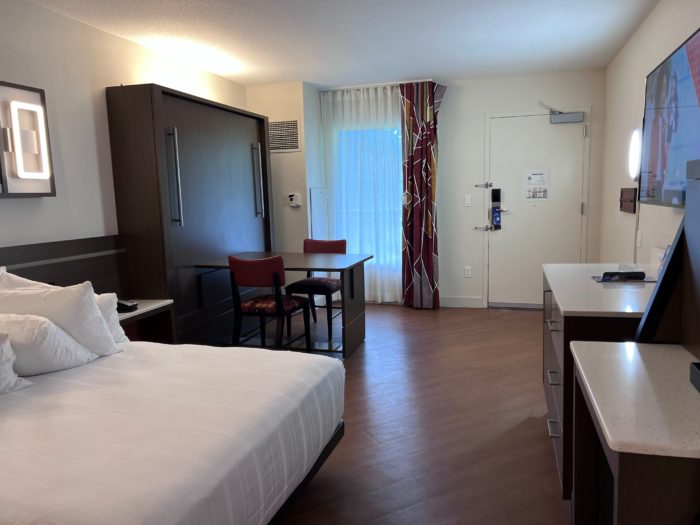 The dresser under the TV is where guests will find the room’s safe, as well as shelf and drawer space. 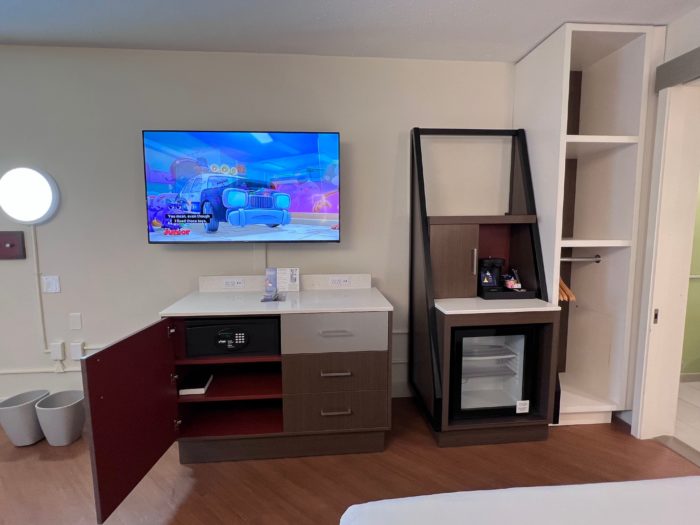 The coffee counter to the right is where guests will find a basic coffee maker, a small assortment of coffee and tea, plastic cups, an ice bucket, and the room’s mini-fridge. 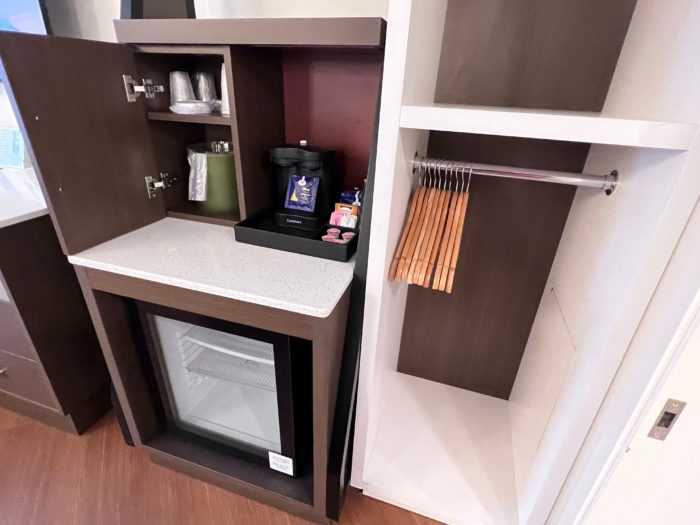 The countertop appears to have been lowered for guest use, along with the closet/storage space’s hangars.

For comparison, here’s what this coffee counter space looks like in a standard room at All-Star Music. 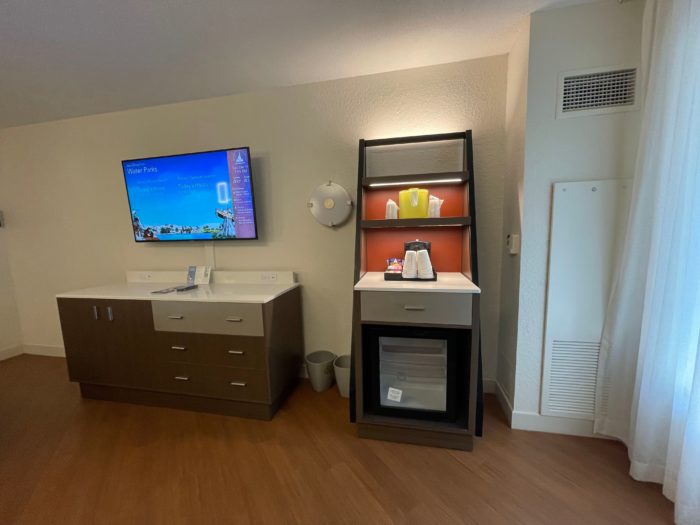 Now, the bathroom in this All-Star Movies accessible room is separated from the bedroom by a sliding door. 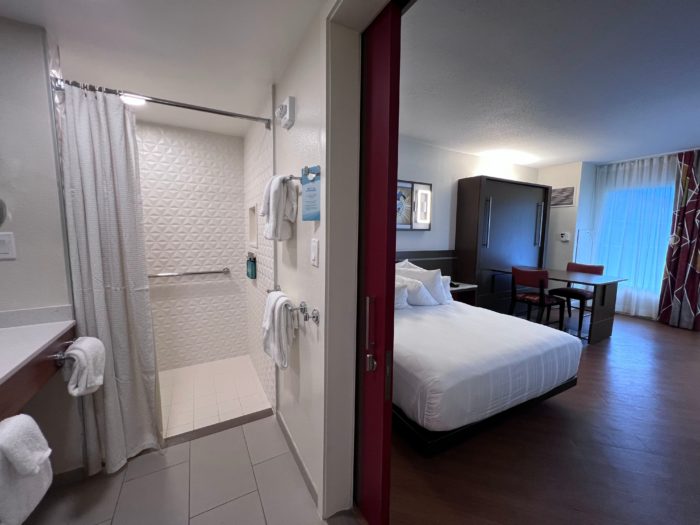 Unlike standard value resort rooms, and to allow for better use of space, the roll-in shower is just to the right of the vanity and the toilet is to the left. There is no separated water closet. 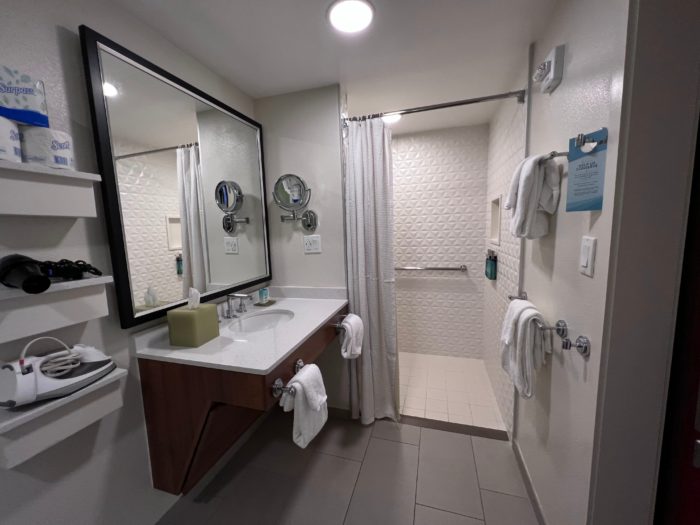 Here’s a closer look at the space a guest can expect between the vanity and the roll-in shower. 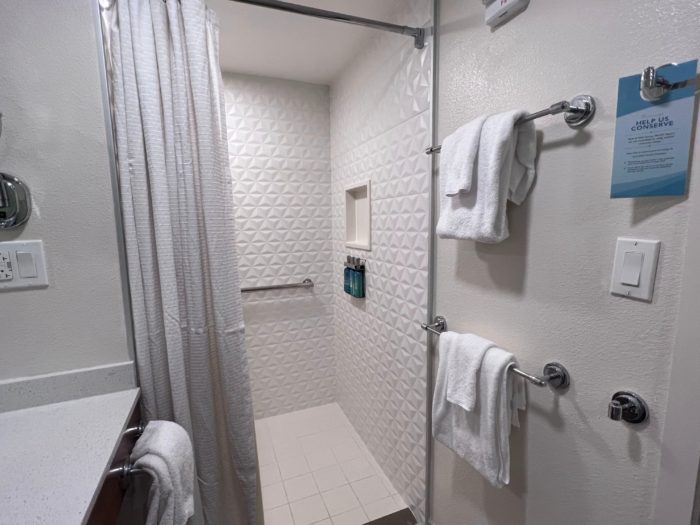 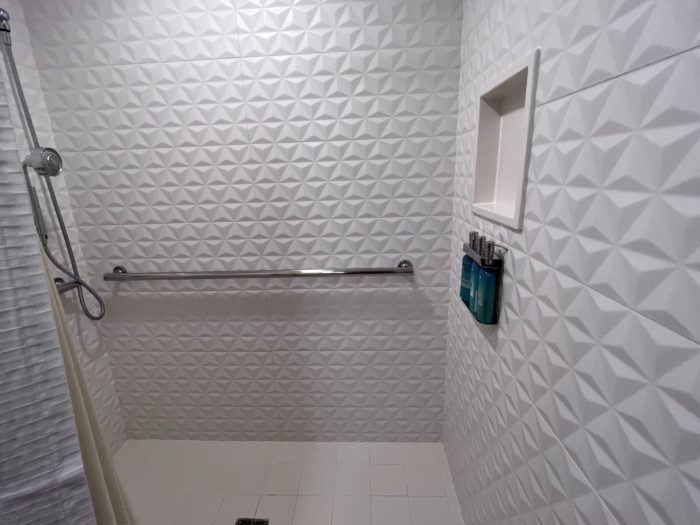 But we give the resort props for the Spaceship Earth-inspired tilework! 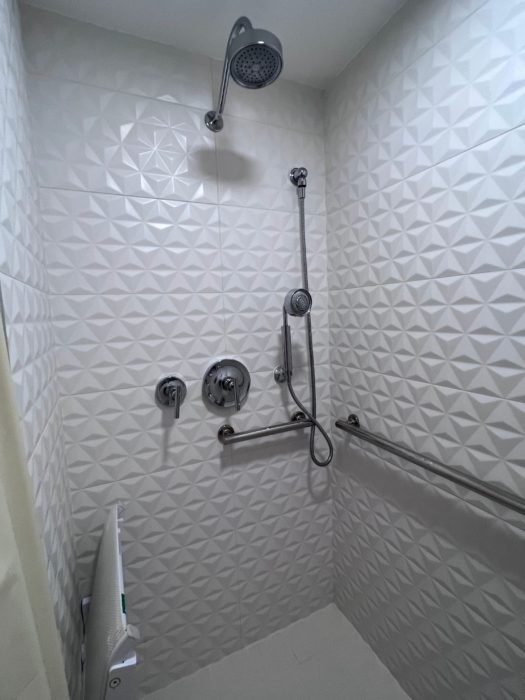 The shower also has the option of a pull-down seat. 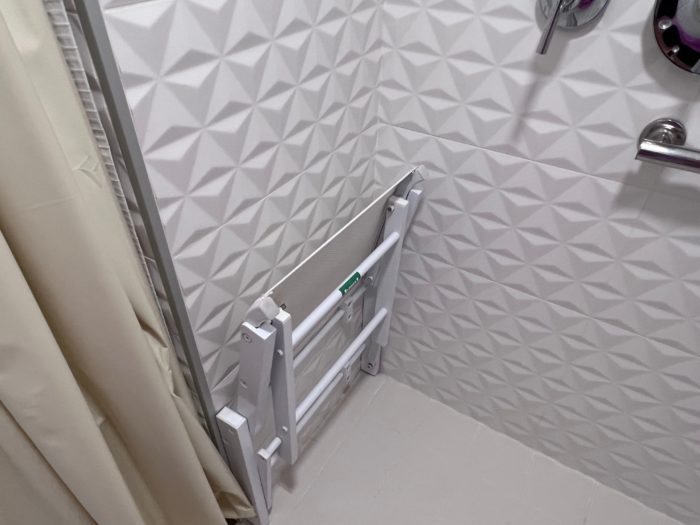 While the vanity space is pretty basic, the sink appears to have been designed for wheelchair access. 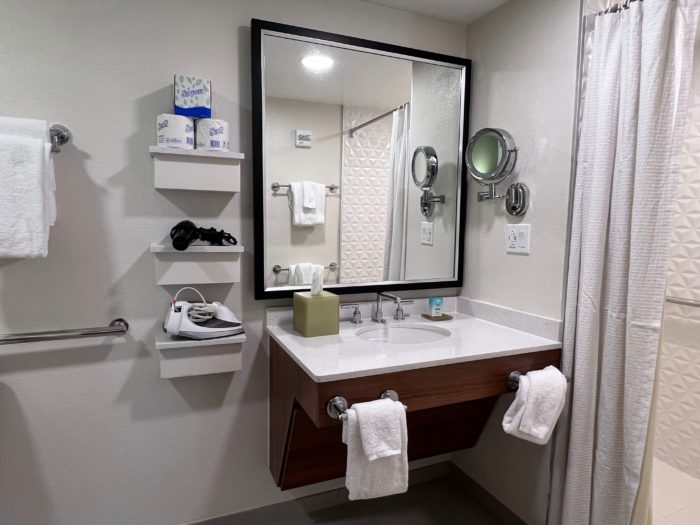 Again, here’s a picture of a standard All-Star Resort bathroom vanity to compare. 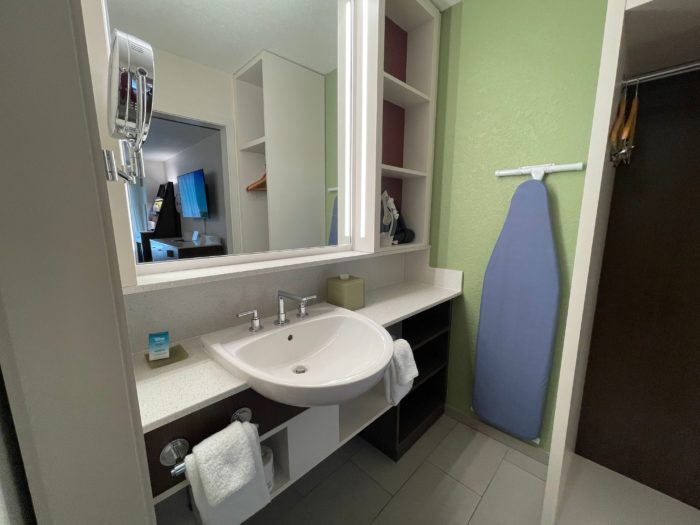 Guests will find the iron and hair dryer on the shelf space between the vanity and toilet. 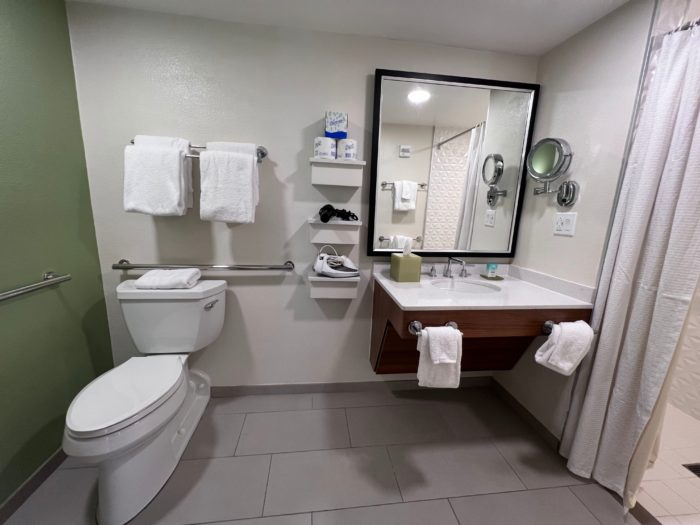 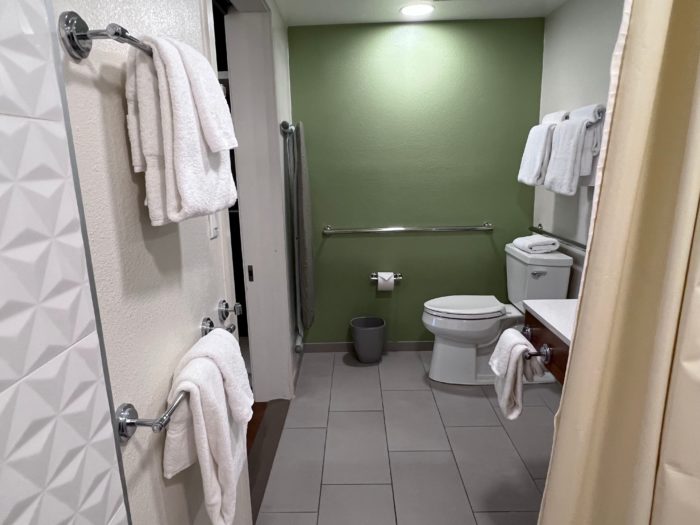 … as well as a different view of the space around the toilet and the various handrails. 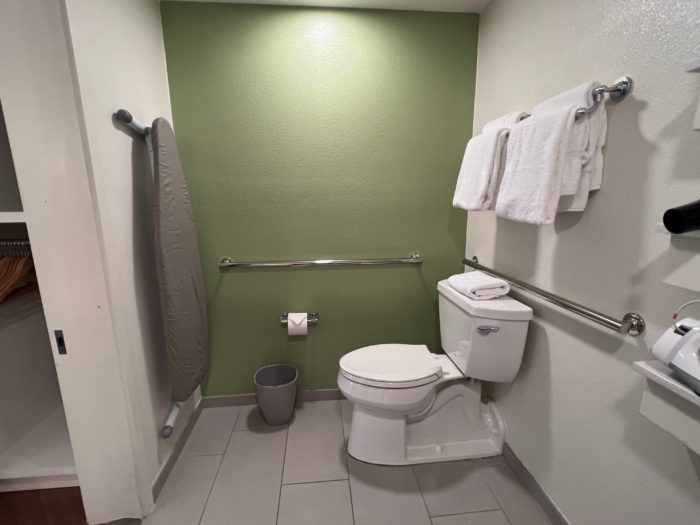 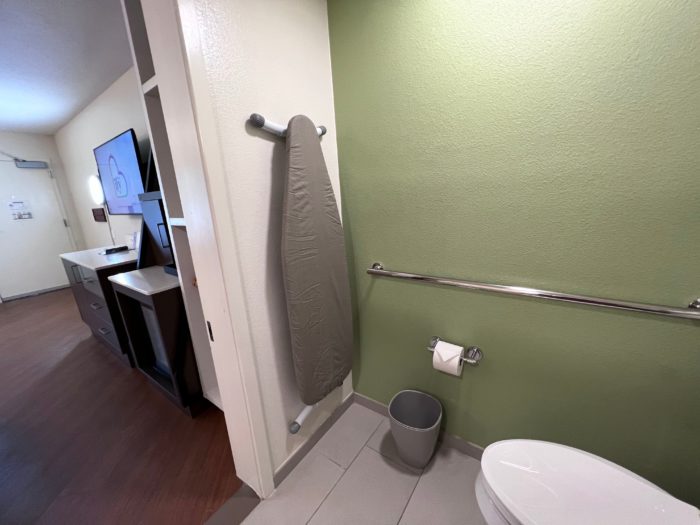 During Chrissy’s visit, a one-night stay in Room 5818 was priced at $203.41 including all taxes and fees. However, rates vary depending on the day of the week and the time of year. 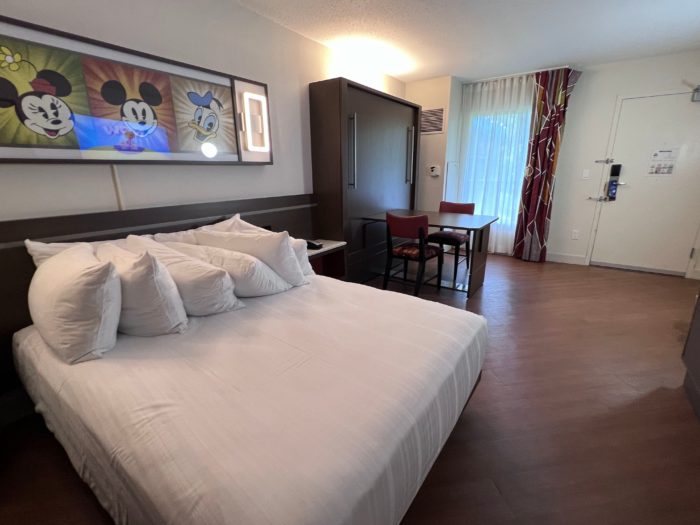 So that’s an idea of what to expect from a wheelchair-accessible room at Disney’s All-Star Movies Resort!

But what do you think of this accessible room’s accommodations? What’s your opinion of Disney’s All-Star Resorts? Let us know in the comments!