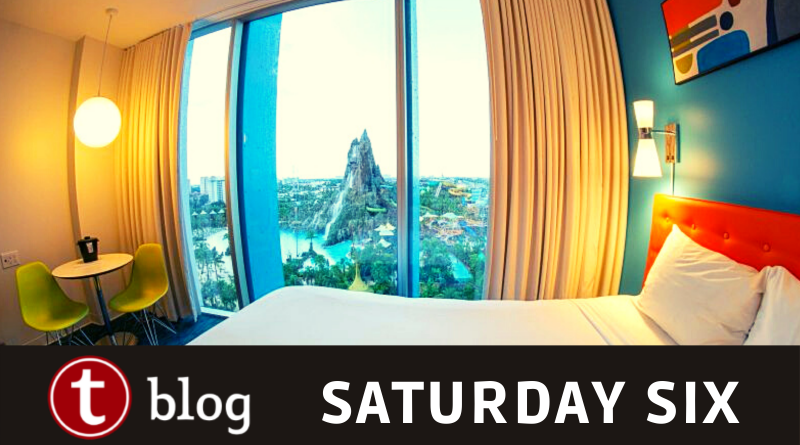 This week’s SATURDAY SIX spends a night at Universal’s Cabana Bay Beach Resort! We’ve been making our way around the Universal Orlando Resort since their reopening after an unprecedented months-long shutdown to see what changes have been made to their on-site hotels.  Today we’re heading into pound for pound the best “value” hotel in Orlando, Cabana Bay…

It seems like a million years ago now, but when Cabana Bay opened in 2014 it was Universal’s first on-site hotel that was targeted to a different audience from the premium experiences offered by the Hard Rock Hotel, Royal Pacific Resort, and Portofino Bay. The immediate success of Cabana Bay led to the fast tracking of a collection of resorts which more than doubled the amount of rooms at Universal; including Aventura, Sapphire Falls, and Surfside Inn & Suites.

One of the biggest strengths Universal has across the board since reopening is making guests feel safe during these “unprecedented times.” While you will see sarcasm on social media from people who just can’t believe it’s true, both Universal and Walt Disney World are leaps and bounds above anyone else in Florida when it comes to enacting safety changes and following through with them. Let’s take something as simple as wearing a mask. Now, my “day job” is in the medical field and because of that I have been wearing a mask every single day since about the middle of March. I wear a mask at work and everywhere we go when I’m not at home. Over the last six months, Universal and Disney are the only two places I have EVER seen employees not only tell people who weren’t wearing masks they had to wear them, but also remind guests to wear them correctly. I’ve seen bus drivers tell guests they couldn’t get on a bus without a mask. I’ve seen temperature check security guards tell guests they couldn’t enter a hotel without a mask. I’ve seen Team Members and Cast Members in the parks kindly remind guests to pull their masks above their nose. This may not seem like much to those reading this at home, but I have not seen this type of diligence anywhere else I have been in the entire state.

There is signage throughout the resort reminding guests of safety guidelines.

The check-in process has markings on the ground for guests to keep socially distancing from each group.

The check-in desks themselves have plexi-glass to protect the Team Member and guest.

Sorry Millenials, no “venmo” accepted for payment during these unprecedented times.

Social distance reminders at every elevator.

You will find hand sanitizer at every elevator bank, or any other place at the hotel where you’ll be touching something another guest may have touched (such as a gate into the pool area).

At dining locations, you’ll find some tables have been taken out of commission to ensure social distancing between groups.

If you are a fan of vintage ’50s and ’60s minimalist designs – and who isn’t – Cabana Bay is the place for you. The retro theming is everywhere. Before you even check in there are classic cars outside available for photo ops. Inside the main lobby building you have artwork, seating, and an entire design aesthetic that brings you back to another era. The rooms themselves have analog clocks along with Zest soap and VO5 shampoo in the bathroom. There is neon signage throughout the resort, which gives the hotel some great elements at night. Many value resorts hit you over the head with larger than life gaudy theming, but Cabana Bay surrounds you like a 1950s sit-com mom’s hug and delivers coherent top-to-bottom theming you generally find at much higher-end resorts.

Some people enjoy the athleticism of basketball, while others admire the grace and skill of soccer, but we at the SATURDAY SIX favor bowling as our favorite sport, as it is the only one you can participate in while eating chili cheese fries or chicken wings (preferably both). Cabana Bay is the only theme park resort in Florida to offer a 10-lane bowling alley.  Galaxy Bowl is actually inspired by the famous Hollywood Star Lanes, the bowling alley seen in The Big Lebowski. Galaxy Bowl can also be considered the resort’s only “table service” restaurant as they have their own dedicated menu along with a full bar. There are even two separate souvenir cups (a 32 oz cup for beer, and a fun bowling pin cup for non-alcoholic drinks).

During busier times, Galaxy Bowl may be reserved for Cabana Bay guests only. Otherwise it is open to everyone.

Cabana Bay has two large pool areas.  One features a waterslide designed to look like a large diving platform from years ago. The other pool area doesn’t have a slide, but it features something even more unique for a theme park hotel pool area: a lazy river!

Similar to Disney’s Value Resorts, the Bayliner Diner is a large food court with several stations featuring a wide array of items. Pizza, burgers, paninis, and chicken sandwiches are like those at similar venues, but you’ll also find an international section with mahi mahi, Brazilian beef churrasco, and a vegan stir fry. There is a dedicated grill and fryer for those looking for cooked gluten-free options, along with a wide selection of pre-made gluten free items.

The seating area for Bayliner Diner is huge, and has a ton of tables and booths. One nice feature is that all the booths have easy access outlets near them to charge your devices (the actual rooms at Cabana are also filled with many outlets and USB charging stations). There are Coke Freestyle machines for those buying the Sonic Fill souvenir mugs, as well as regular soda stations for those purchasing “one time use” cups (which have RFID chips allowing three extra refills over the course of two hours). There are several large TVs playing ’60s era television ads, which carries that same level of fun nostalgia you’ll find at Sci-Fi Dine-In Theater Restaurant, It is extremely rare to find a food court worth going out of your way to dine in, but Bayliner Diner even tops AOA’s Landscape of Flavors.

Cabana Bay’s pizza station has their own themed pizza boxes. One is for pizza, the other for breadsticks.

Bayliner also serves some excellent breakfast options before you spend the day at the pool or the parks.

Cabana Bay also has THREE great bars, including the incredible Swizzle Lounge located directly in the lobby. That’s right, go tell someone else in the family to check in while you saddle up to a bar ripped straight out of the ’60s. Outside in the Cabana Courtyard is Atomic Tonic, which has a wide selection of themed drinks as well as a souvenir cup that you can take with you in the pool.  Meanwhile, over in the Lazy River Courtyard is The Hideaway Bar & Grill, which also has its own set of themed drinks (as well as a full bar).  All three bars have TVs (generally playing a current sporting event), and The Hideaway is directly next to a shockingly great made-to-order take out window, so you can grab a bite to eat as well. Cabana Bay is the gold standard of value resort bars and lounges.

That’s right, you can take your drinks to the actual pools at Cabana Bay.

Oh, did we mention Cabana Bay has a STARBUCKS in the lobby?!

I’ve gone on the record saying that Volcano Bay has become my favorite park in all of Florida, and Cabana Bay is all but connected to it! In fact, guests staying at Cabana Bay have their own dedicated walkway (and security check) to get to the park. For me personally, being close to a park is my absolutely favorite part of an onsite hotel. Being able to walk to Disney’s Magic Kingdom made me love The Contemporary. Being able to walk to EPCOT and DHS made staying at Yacht Club and the Boardwalk a blast. I always thought the walk from the Royal Pacific to Islands of Adventure was quick, but the jaunt from Cabana Bay to Volcano Bay is the fastest of all. With everything considered: view, price point, and amenities, a Volcano View room at Cabana Bay is the best place to stay not only at Universal, but in all of Orlando.

Aengus Mackenzie  – the only person to have had a drink at every single bar on Universal property in one weekend – has put together this fantastic chart showing the walking distances from the various onsite hotels and theme parks from each other. 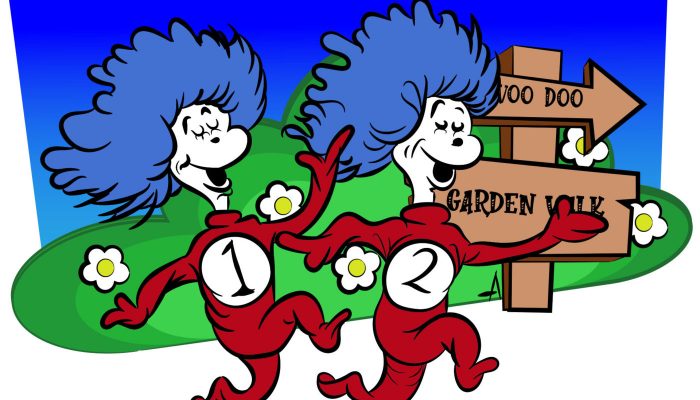 We just celebrated the SEVEN anniversary of The Magic, The Memories, and Merch!, the sister article to the SATURDAY SIX, and it is safe to say we love theme park resort merchandise. Cabana Bay has hands-down the most unique resort-specific merchandise at  any Disney or Universal hotel, let alone value resorts. There are your usual pins, keychains, t-shirts, and coffee cups, but also beach towels, beach bags, candy, and even waterproof phone cases. There are Galaxy Bowl-themed bowling shirts, Atomic Tonic shot glasses, and more Jack LaLanne-related items than you could have ever dreamed existed. Cabana Bay’s gift shop is actually one of the top five stores at Universal, as it also contains a great mix of items from the Wizarding World of Harry Potter, The Simpsons, Despicable Me, Transformers, and even Marvel. Chocolate frogs, unicorn plush (“It’s so fluffy!”), King Kong shirts, and Cabana Bay breath mints–that’s what I call a gift shop!

So there you have it: The SATURDAY SIX Spends a Day at Universal’s CABANA BAY! See you next weekend for the latest installment of the SATURDAY SIX, where we’ll look at something fun from the world of Disney and Universal. If you enjoyed yourself, be sure to check out The Magic, The Memories, and Merch! articles covering the latest from the Disney Outlet Stores. You can also follow Your Humble Author on Twitter (@derekburgan).

The SATURDAY SIX Spends a Day at the UNIVERSAL ORLANDO RESORT