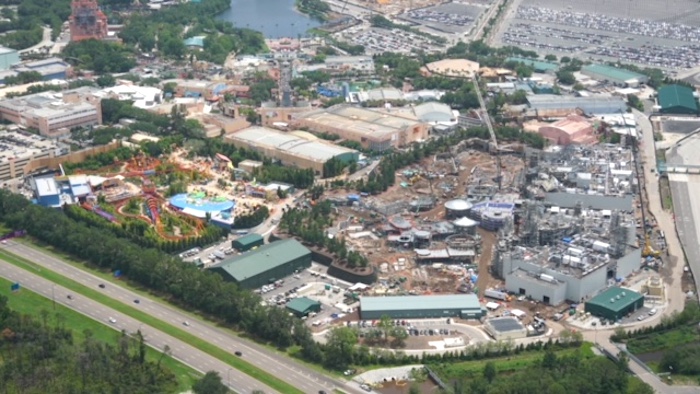 QUICK NOTE: In case you missed it, the monthly DISNEY OUTLET STORE PHOTO REPORT came out earlier this week with discounted merchandise from Pandora: the World of Avatar, the Rivers of Light Nighttime show, and a whole bunch of items straight from Shanghai Disneyland (including a pen that needs to be seen to be believed!). CLICK HERE for more.

This week’s SATURDAY SIX takes a look at the construction taking place at Walt Disney World! Anyone who has been on Disney property in Florida lately has seen one thing more than maybe anything else: construction. While frustrating in the short run, the new infrastructure, rides, hotels – and even a new transportation system – are going to make the upcoming months and years some of the most exciting in Walt Disney World history. There are several great theme park bloggers putting boots to the ground covering every single step of the construction process, and one of our favorites is @bioreconstruct.

As of this writing, we are still not completely convinced Bio is just one person, as it would seemingly take a group of at least 10 people to cover the ground he does. Nor are we 100% sure Bio is even human, as he has broken the time/space continuum on several different occasions. What we do know is that Bio is someone you should be following for almost daily updates of whats going on in Orlando–not just Disney, but Universal, I-Drive, and pretty  much any place you can think of. Today we’re going to look at some of the construction projects Bio has covered in the WDW area, starting with…

While I personally can’t figure out how this new transportation system is actually going to work without being severely congested, one of the most amazing announcements Disney has made over the last several years was the upcoming Disney Skyliner. A gondola transportation system joins the monorail, buses, Minnie Vans, and several forms of watercraft as a way to get across property. I’ve always thought the Disney monorail system is one of the most magical things at WDW. Yes, it has had its fair share of problems lately, but the monorail is still something the average guest never experiences outside of WDW and helps separate Disney from their competition.

The Disney Skyliner has the opportunity to be a really memorable way for guests to get across property, and something they will definitely tell friends and family about back at home. It also adds a new level of prestige to a whole bunch of Disney moderate and value resorts, as the monorail resorts now will have some competition in both convenience for families and a “coolness factor” for kids.

As a person who has had great experiences at both Caribbean Beach and Coronado Springs over the years, I do have slight reservations over gigantic hotel towers being built at the front of both resorts. I will concede that both new towers have the opportunity to provide some truly amazing views for guests along with some new amenities and dining experiences, so I’m certainly hoping for the best.

We can all agree that at this point, the venue formerly known as Downtown Disney has been “fixed” with Disney Springs. The new parking garages have made getting to the area about a million times easier, the new bus loop is more convenient for onsite guests, and restaurants such as Homecomin’, The BOATHOUSE, and Morimoto Asia have made the Springs THE dining destination at WDW. You gotta love the Indiana Jones details in Jock Lindsey’s Hangar Bar and heck, even Planet Hollywood has one of the best happy hours on property at their Stargazer bar.

The upcoming additions to Disney Springs include a third parking garage, the NBA Experience, and the restaurants Jaleo and Wolfgang Puck Bar & Grill.

Aside from the Disney Skyliner station going outside International Gateway, EPCOT has two major projects underway with the new Guardians of the Galaxy attraction going in the home of the former Ellen’s Energy Adventure, and a Ratatouille attraction being added to the France Pavilion in World Showcase. While an original EPCOT fanboy like me has to give up the ghost on the park ever being what it once was, I do have to admit the more I see and hear about the GOTG coaster in Future World, the more I like it. It looks like it is going to be absolutely HUGE, and it does appear that James Gunn – the director of the GOTG movies in the Marvel Cinematic Universe – has some sort of input in the overall feel of the attraction. From reading his Twitter feed and interviews, I get the impression that Gunn is a Disney fan going way back, and will help bring his patented storytelling – and sense of humor – to the ride.

As for Ratatouille, I’m in the camp that it’s a Top 6 Pixar Film of All Time. (Maybe we should do a SATURDAY SIX on that topic?) The film is great and completely rewatchable at any time. While reviews of the Ratatouille attraction in Disneyland Paris are mild at best, and we’re not getting the Gusteau’s restaurant that they have over there, I don’t care. World Showcase needs more rides, I love Ratatouille, and that’s good enough for me.

Officially opening on June 30, Toy Story Land is an area which is going to have kids losing their mind. With a new kid-friendly roller coaster and a Mater’s Junkyard Jamboree-like attraction featuring green aliens, the overall guest capacity doesn’t seem that high for the area, but it does bring such much needed rides for the younger set. We will have Toy Story Midway Mania back to having three tracks (along with a new entrance and exit) and us older kids can enjoy the S’more French Toast Breakfast Sandwich and a ridiculously cute Alien Sipper souvenir cup at Woody’s Lunch Box.

While not opening until next year, we’re still not convinced that gives Disney enough time to prepare for the sheer mass of humanity who will descend upon Disney’s Hollywood Studios to see one of their lifetime dreams come true with the opening of Star Wars: Galaxy’s Edge. A land mixed with the depth and wonder of Universal’s Diagon Alley combined with the brand recognition of Star Wars is a powerful mix. Guests will see full-size replicas of Star Wars vehicles along with what looks to be a tremendous Milenium Falcon attraction. The other attraction in Galaxy’s Edge is Battle Escape, and as a betting man I would put all my money on this being the premier attraction in Orlando when it opens. Disney hasn’t released a ton of info yet on the area, but recently announced Galaxy’s Edge would be opening in “Late Fall 2019” and confirmed that the highly anticipated Star Wars Hotel would be located in the exact place everyone knew it would be (AKA, right next to the land.)

Another thing coming soon to DHS will be a whole new way to enter the park. For a while now there has been a massive project taking place on Osceola Parkway, one that will eventually get guests to the front gates of DHS much quicker than before. Much like how Disney Springs got convenient new exit ramps straight off I-4, DHS is going to have straight access direct from Osceola Parkway to the park’s toll plaza. From there guests will also have a new way to enter and exit the parking lot (which has been expanded.)

Across town, the Universal Orlando Resort has also been hard at work at building new projects. The Aventura hotel is almost finished (opens in August), the new Endless Summer hotels have starting popping up (in the home of the former Wet ‘N Wild water park), and a new lake show at Universal Studios Florida seems really close to being ready (although we have heard almost no details on it from Universal.)

How could we possibly leave out the upcoming addition to the Wizarding World of Harry Potter: Hogsmeade, with the upcoming family friendly roller coaster. Rumored to have guests going through the Forbidden Forrest and including several animatronics, this could be an incredible addition to Islands of Adventure in 2019.

While this has absolutely nothing to do with Disney or Universal, it certainly fits the theme of what guests of those two areas love. A new hotel is being built at the Seminole Hard Rock Hotel & Casino in Hollywood, FL (south of West Palm Beach on the East Coast). The hotel is actually shaped LIKE A GUITAR. This actually does tie into the Orlando parks a bit, as the Hard Rock Cafe at Universal used to be shaped like a guitar, until the entire area was changed in the 90s and the restaurant transformed into the current version we have in CityWalk today.

So there you have it: A SATURDAY SIX Look at Walt Disney World Construction! See you next weekend for the latest installment of the SATURDAY SIX, where we’ll look at something fun from the world of Disney and Universal. If you enjoyed yourself, be sure to check out The Magic, The Memories, and Merch! articles, or, for your listening pleasure, check out the E-Ticket Report podcast. You can also follow Your Humble Author on Twitter (@derekburgan).

Special Thanks to our spirit animal Brandon Glover, the bio-est of all reconstructs @bioreconstruct, and blogger to the stars Megan Stump for their invaluable assistance with this article. Be sure to also check out Brandon on The Park Blogger podcast with goofballs co-hosts Aengus Mackenzie and LitemAndHyde, while fellow Potterheads may enjoy Meg’s work on the Central Florida Slug Club.