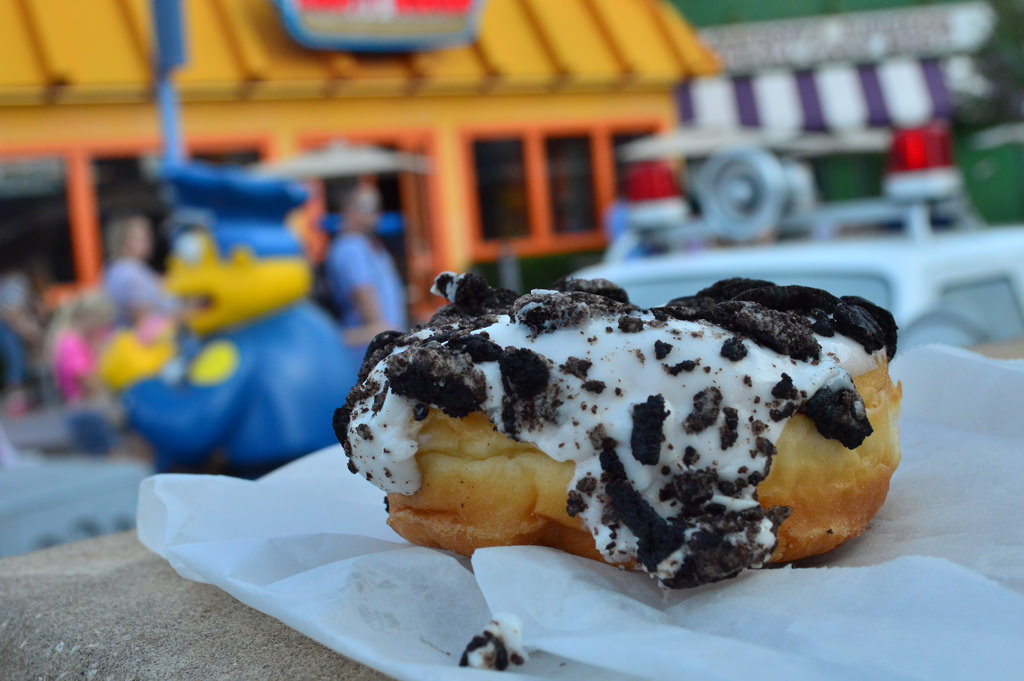 This week’s SATURDAY SIX takes a look at Six Snacks at Universal Orlando That You Gotta Try! A couple weeks ago we flew across the country to check out some of the great Disneyland snacks, and today we’re back home in Florida to look at even more delectable delights. We’re going to head over to the Universal Orlando Resort, home of some of the most outrageous and most extreme food options we’ve ever seen in the theme park world. However, instead of looking at crazy desserts that should come with an insulin pump, we are going to set our sights on some of the most original, creative, or just plain fun treats  in either Islands of Adventure or Universal Studios Florida. So sit back, prepare to channel your inner Homer Simpson, and let’s begin our list with…

The fine folks in Springfield USA are no strangers to delivering great donuts to us theme park fans. The area opened with the debut of the classic Lard Lad giant pink donut, which immediately became a huge hit. In 2016, Lard Lad introduced more donuts to the menu, but in true Simpsons fashion, they didn’t go with the same ol’ same ol. Instead we got the donuts we dreamed of. Donuts topped with crushed Oreos, Fruity Pebbles, bacon and more! This at least gives us in Orlando a small taste of the type of donut options available in Universal Studios Hollywood’s Lard Lad. Unlike Orlando, USH’s Lard Lad does not serve ice cream because their Springfield has Phineas Q. Butterfat’s Ice Cream Parlor, so instead they opened with a larger variety of donuts.

Several years ago, Disney started releasing some very fun candy boxes featuring many of their iconic characters from both movies and the theme parks. However, the actual candy had very little to do with the characters outside of silly puns. For example, there was the Haunted Mansion’s Madam Leota on the box of I See Chocolate In Your Future (dark chocolate hot fudge truffle.) Alice in Wonderland’s Cheshire Cat was on the box of I’m Just Mad About Chocolate (milk chocolate mint meltaways) while Monster Inc’s Mike Wazowski and Celia Mae had the Eye Know What Women Want! Chocolate! (milk chocolate peanut butter.)

Universal has many generic candy options themed to their brands as well (including my favorite, the Jaws themed gummy fish candy,) but there are also ten candy bars which are completely tied into the characters they feature. The candy bar with Despicable Me’s Minions uses banana in its recipe, while the one with Agnes is cotton candy flavored (in the film, the kids came home from Super Silly Land with Cotton Candy.) The E.T.  bar is a chocolate peanut butter bar with Reeses Pieces, while Spongebob Squarepants has a white chocolate pineapple bar with pineapple bits. When you unwrap the Back to The Future bar the silver wrapping is the iconic “OUTATIME” license plate. The synergy between these bars and the characters they feature is a great touch, and something we can hopefully see more of from both Universal and Disney in the future.

I would never have predicted this in a thousand years, but the Hello Kitty giftshop that opened in Universal Studios Florida earlier this year was a underrated gem that features a whole bunch of fan service for Universal fan boys such as myself. Sure, you have the dolls, clothes, and miscellaneous items for the Hello Kitty fans (there is even a Hello Kitty meet and greet outside,) but there are also incredible mash-ups featuring Hello Kitty with Universal brands such as King Kong, Jaws, and Back to the Future! They even have some of these mash-ups available as prints and phone cases (please Universal, PLEASE let us have the Hello Kitty/Jurassic Park keychain from Universal Studios Japan.)

The shop also contains an area featuring snacks, with some of the cutest treats you will see in all of Universal. Of all the whimsical choices, the one you need to check out are the S’mores. There are various characters represented in S’more form, none of whom I recognized other than Hello Kitty, but all of the designs are great. My personal favorite is the “Keroppi” version, who I’m assuming is a frog in the Hello Kitty universe. You have chocolate, you have graham cracker, and you have marshmallow, all presented in the most fun way humanly possible.

The Simpsons television show has a long history of having fun with the theme parks we know and love, along with mocking just about all of our other favorite things too. In the sixth season of the show, during the episode Homer Badman, there are several jokes aimed at the candy industry and we are introduced to the Krusty Klump Bar in a hilarious segment referencing Charlie and the Chocolate Factory. Using the same love and care (and quality control) that Krusty the Clown has in all his authorized products, the Klump Bar features many of our favorite snack foods just crammed together. That’s right, milk chocolate, marshmallows, pretzels, and potato chips all in one candy bar. It sounds next level bananas, but it is actually good, if a little bit messy. There is also a version which features peanuts as well (in the show it was almonds.)

Just as the Klump Bar came straight out of The Simpsons television show, the Cauldron Cakes found in the Wizarding World of Harry Potter are referenced in several of the Potter books as well as the recent Harry Potter and the Cursed Child screenplay. Found at both Honeydukes in Hogsmeade Village and Sugarplum’s Sweet Shop in Diagon Alley, these freshly made cakes are moist and delicious. Looking just like a mini-cauldon, Muggles such as myself often buy one to take over to the Leaky Cauldron or Three Broomsticks for a dessert after our meal. Imagine a chocolate cupcake, filled with chocolate mousse, and then topped with more chocolate. JK Rowling, is there anything she can’t do?

UPDATE: In June, 2017, the Wizarding World scrapped the original style Cauldron Cake and introduced a new one that is pretty much like an elaborate cupcake. It comes in a great box, along with a cauldron that you can reuse. The “flame” icing looks spectacular, but unfortunately because of the way many of the cauldron’s are bagged inside,  the bag squishes the icing down.

A while back we did a SATURDAY SIX on the most iconic snacks at the Magic Kingdom. If there was a snack that could be considered iconic at the Universal Orlando Resort, it would be their signature snack, the brookie. A chocolate chip cookie baked inside of a brownie, the brookie is the greatest thing since chocolate met peanut butter, pepperoni met pizza, and green eggs met ham (well, maybe not the latter.) True brookie aficionados need to head over to Toothsome Chocolate Emporium to take on the insane Brookie Sundae at CityWalk’s Toothsome Chocolate Emporium

So there you have it: Six Snacks  at the Universal Orlando Resort You Got To Try! See you next weekend for the latest installment of the SATURDAY SIX, where we’ll look at something fun from the world of Disney and Universal. If you enjoyed yourself, be sure to check out The Magic, The Memories, and Merch! articles, or, for your listening pleasure, check out the E-Ticket Report podcast. You can also follow Your Humble Author on Twitter (@derekburgan).

Special Thanks to crack staff photographer Brandon Glover, Universal Orlando merchandise expert Hedgehog’s Corner, and blogger to the stars Megan Stump for their invaluable assistance with this article. Be sure to also check out Brandon on The Park Blogger podcast with co-host Aengus Mackenzie and fellow Potterheads may enjoy Meg’s work on the Central Florida Slug Club.