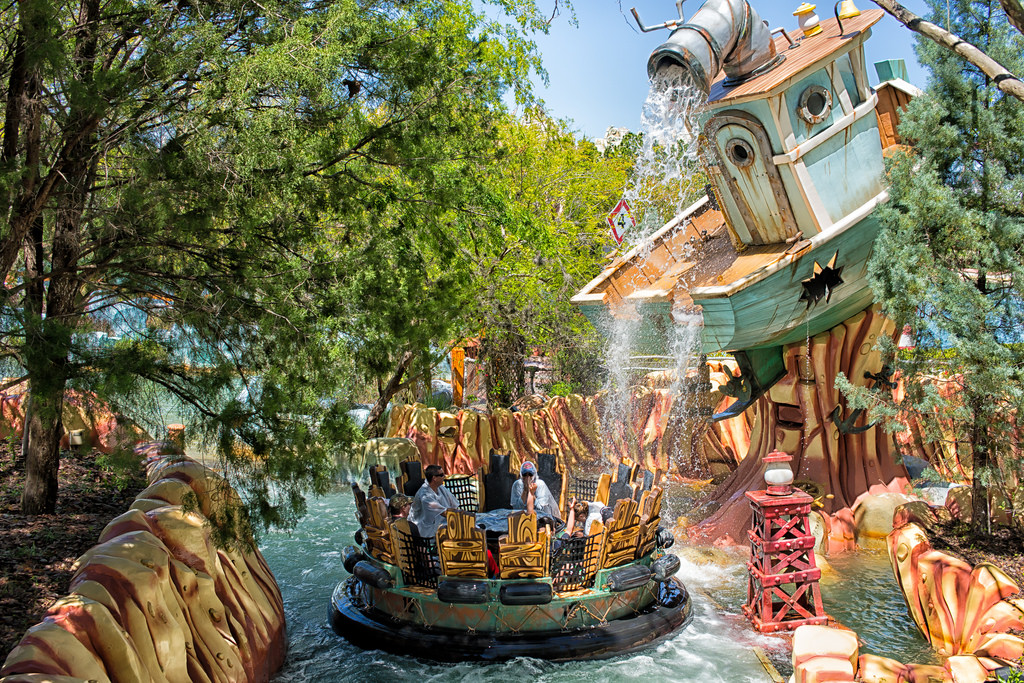 This week’s SATURDAY SIX takes a look at the Six Highest-Rated Attractions at the Universal Orlando Resort! This month we’ve taken the data submitted by TouringPlans readers after they have returned from their Orlando vacations to get an idea of what they liked – and didn’t like – during their trip to the parks. We started with the highest-rated rides at Walt Disney World, followed by the highest-rated shows and spectaculars. Last week we looked at the lowest-rated attractions at WDW and today we are going down the street to the Mouse’s chief competition, the Universal Orlando Resort. Now, two years ago the SATURDAY SIX commissioned a blue-ribbon panel consisting of some of the biggest names in the theme park community to rate Their Favorite Attractions at Universal. It’s going to be interesting to see what the “experts” chose compared to the average family, and let’s kickoff the countdown with…

# 6 – Harry Potter and the Forbidden Journey

Harry Potter and the Forbidden Journey made its debut over 7 years ago and is pretty much the ride which forever changed the fortunes of Universal. The attraction’s Hogwarts Castle facade is impressive enough, but what really blew everyone away was the attention to detail in the queue. In fact, the queue of Forbidden Journey is so incredible that for a while there was a “castle tour” option where guests could walk the queue without riding the attraction. Universal used elements both from the Potter books and film series throughout the queue to create an amazing experience like no other. Creative nailed the “living paintings” concept and even had the debut of the Four Founders of Hogwarts, with the four having a conversation about the guests through their paintings. Fans of the Potter series get to walk through places such as Dumbledore’s office, the Gryffindor Common Room, and the Defense Against the Dark Arts classroom.

The ride itself has guests going through the greatest hits of the first several Harry Potter films, including a stop into the Chamber of Secrets, a fly through of a game of Quidditch, and even a run-in with Dementors. This is all done spectacularly through the use of live-action sets and screens that work seamlessly together to provide an experience like no others. The cherry on top of the sundae is the use of all your favorite Harry Potter stars both in the queue and in the ride.

# 5 – Harry Potter and the Escape From Gringotts

It would be pretty much impossible to top the facade and queue of Forbidden Journey, but Universal did their best with Escape From Gringotts delivering a “wow factor” to top all wow factors with a fire breathing dragon perched upon the top of Gringotts bank at the end of Diagon Alley. This dragon has quickly become the most photographed item in all of Universal and it is always fun to people watch when the fire comes just to see the reactions of pure joy all around. While the Gringotts queue itself doesn’t have the depth of wonder that Hogwarts Castle does, it does have the jaw-dropping moment of entering the lobby and seeing the million dollar chandeliers and all the goblin animatronics. In fact, the Gringotts lobby may be the most impressive room in all of the Wizarding World, it’s just stunning.

Whereas Forbidden Journey was a Potter greatest hits package, Escape From Gringotts cleverly takes guests straight into the Harry Potter and the Deathly Hallows Pt II film and recreates one scene from a different perspective, featuring you. Everyone who saw the movie knew immediately “that has to be a theme park ride,” and it is. The initial drop is a rush each and every single time, and the coaster-like ride through the vaults includes appearances by some big names in the Potter universe, including Voldermort himself. Many people think of Universal’s old tag line of “ride the movies” when they think of the park and nothing fulfills that promise more than Escape From Gringotts.

Looking back at the scores from the experts, both of the Potter rides ranked higher and Forbidden Journey was ranked above Gringotts. Its possible that the Kuka-arm used in Foribidden Journey to create the movement of “flying” causes a decent amount of guests to get a little queasy, causing the score to be lower.

# 4 – The Amazing Adventures of Spider-Man

It was surprising enough to see the Potter E-Ticket rides so “far back” on this list of the best attractions, but seeing Spider-Man at #4 makes me want to submit some TouringPlans readers into a random drug testing program. The facade is what it is and won’t win any awards. However the queue is just like walking straight into the Daily Bugle (from the Spider-Man animated series) and there are a ton of great gags for those in the queue who keep their head on a swivel. The Spider-Man Express Pass queue also has unique story elements that you can only see there (including Peter Parker’s darkroom.)

The ride was a complete game changer when Islands of Adventure opened in 1999 and – in my mind – no one has topped it in Orlando (I’ll give Flight of Passage props, it’s a wonderful ride but it doesn’t have the story Spider-man does, especially the climatic ending.) Universal made massive upgrades to the attraction in 2012 by upgrading the video screen resolutions, changing the ride programming, updating the on-ride audio, and adding some too cute by half appearances by Stan Lee. Now the 3-D really pops and the characters look terrific. Spider-Man is action packed and full of humor, and that makes for a powerful combination.

Disney fans at this point might be thinking to themselves “whaaaaaaaaaaaaaaaaaaaaat?!” but that’s only because if they haven’t been outside of the WDW bubble, they’ve never been on a true water ride. I’ve been on Kali River Rapids many times at Animal Kingdom without ever getting wet. You WILL get wet on Popeye, it is just a matter of will you be just soaked or nearly drowned. The theming of Bilge Rate Barges is whimsical and fits right into the “straight out of the funny pages” style of Toon Lagoon. Among the drops and waterfalls during the ride, there is also the ability for guests not riding to spray you with water cannons AND have water dumped on you from strategically placed shower heads.  Bilge Rat’s length (it’s a nice long trip) and some hilarious surprises during the ride make it one that kids want to ride over and over and over.

Wow! The Incredible Hulk Coaster only managed to grab an honorable mention from the list from our experts, but here it is at #2!  I will say that the recent overhaul of the attraction brought some much needed improvements. Not only did Universal replace every inch of track, but brought it a really cool lighting package, a new sound system, and fleshed out the indoor queue so that there is actually something to look at.  I still consider the start of The Hulk, with the opening launch -waiting in the tunnel looking up at the sky, ready to be shot out – to be the best part of any coaster in Orlando. The Hulk’s wild track design and signature ROAR can be seen and heard across Islands of Adventure. It calls you to action!

At first, the high score of Hogwarts Express threw me for a loop. However the more I thought about it, the more it is one of my favorite rides too. Whenever someone asks me for my favorite rides at Universal, I always include it. I think the King’s Cross queue is exceptional. Just think, guests get live music, nods to the films, and a place where you can actually buy snacks and drinks in the queue (WHY DON’T THEY ALL DO THAT?!!) all before they get to the Platform 9 3/4 “brick wall” moment.  I love the fact that there are two completely different experiences on the attraction (one coming from King’s Cross and another coming from Hogsmeade) and what Universal did with the “glass doors” and incorporating them into the story was nothing short of brilliant. This is a ride the whole family can enjoy, and clearly they do!

One last note. One SATURDAY SIX we’ve been wanting to do for a long, LONG time is the “6 best ways to enter Platform 9 3/4.” It was inspired by This Video (which is still my favorite way.)

So there you have it: The Six Highest-Rated Attractions at Universal! See you next weekend for the latest installment of the SATURDAY SIX, where we’ll look at something fun from the world of Disney and Universal. If you enjoyed yourself, be sure to check out The Magic, The Memories, and Merch! articles, or, for your listening pleasure, check out the E-Ticket Report podcast. You can also follow Your Humble Author on Twitter (@derekburgan). Special Thanks to crack staff photographer Brandon Glover, my personal protege Hunter “Elvey” Underwood, photo wunderkind Mike Sperduto, and blogger to the stars Megan Stump for their invaluable assistance with this article. Be sure to also check out Brandon on The Park Blogger podcast with goofballs co-hosts Aengus Mackenzie and LitemAndHyde , while fellow Potterheads may enjoy Meg’s work on the Central Florida Slug Club.

13 thoughts on “SATURDAY SIX: The 6 Highest-Rated Attractions at the Universal Orlando Resort”