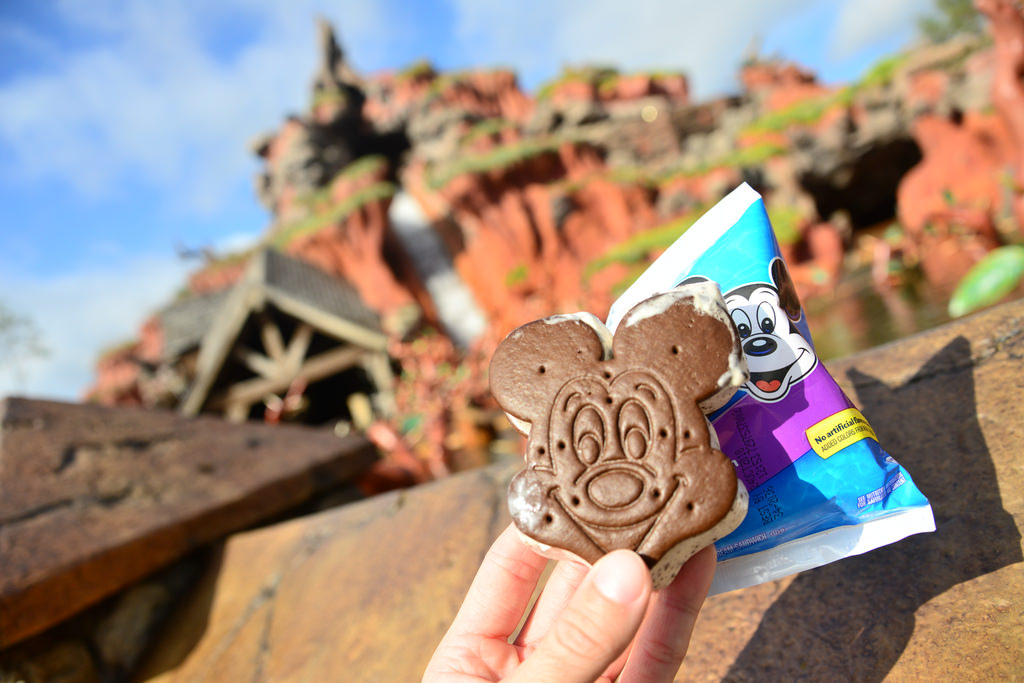 This week’s SATURDAY SIX takes a look at Mickey Shaped Food at Walt Disney World! Long time SAT SIX readers have probably noticed that we are more than a bit obsessed by theme park snacks. Whether it be in Disneyland, Disney World, or Universal, if the theme parks make it, we’ll eat it, that’s our policy. In fact this very blog series is the leading cause of adult onset diabetes. You may be thinking, “maybe you guys should cover some healthy options?”  To that we say NAY, NAY! We’re only going to cover the good stuff here. In fact, today we are going to check out some of our favorite foods in all of Walt Disney World: those shaped like Mickey.  That’s right, Disney snacks that taste good and bring a smile to our face, so let’s kickoff the countdown with…

To show the power that Mickey shaped foods have over us, let’s start off with a staple snack of our Disney trips: Mickey’s premium ice cream sandwich. Back in the real world we may buy a pint of Ben & Jerrys, or maybe a box of popsicles, but who gets ice cream sandwiches? Inside the Disney parks this cookies and cream flavored frozen treat just tastes better than the vanilla ones we get back home. This is also one of the rare treats that has Mickey Mouse’s full face smiling back at you, making it even more special.

Available: Throughout the resort.

The small Mickey waffles are our go-to foods at Disney buffets like Tusker House and Cape May Cafe, but it’s inside the Magic Kingdom where we can get the full size version. At rope drop many guests head straight to Seven Dwarfs Mine Train, but we take a left hand turn at the hub and head over to Liberty Square to get a plate of golden brown goodness.

Bakeries in Walt Disney World have a lot of tremendously tasty options, but we love the Mickey-shaped Rice Krispies treats. Unlike traditional Rice Krispie treats, these are served on a stick, so your hands won’t get sticky while eating. Several bonus points awarded here as Disney uses the actual Kellogg’s Rice Krispies cereal in making them, so you don’t have some goofy name like “crisped rice snack” that you’ll see elsewhere, and this is also the only food on this list that you pretty easily replicate in your own home.

Available: At bakeries throughout the resort along with hotel food courts

We love pretzels at the theme parks. They are a filling snack that is easy to eat while on the go. Some pretzels are better than others though, such as a Bavarian pretzel and beer at Germany in Epcot that should be on every Disney foodie’s bucket list. The best pretzel however is a Mickey pretzel. The optional cheese sauce can help turn this large and hot pieces of perfection into just about a meal by itself.

Located: At all the Disney theme parks.

When it comes to iconic snacks in Walt Disney World we have a short list of front runners for the top spot. Dole Whip, popcorn, and churros would be in contention, but don’t count out the Mickey premium ice cream bar. The perfect treat for a hot day (which, in Florida, is just about every day,) the crunchy chocolate coating mixed with the softer vanilla ice cream inside combine for a great taste in every bite. The Mickey bar is a first ballot Hall of Famer snack for both young and old.

When you bill a food item as “colossal,” you better deliver on the goods. When it comes to “blessing of size” at Walt Disney World we could just as easily be referring to foods such as the s’mores baked Alaska at The BOATHOUSE or the famous Kitchen Sink at Beaches and Cream. At Animal Kingdom, the colossal cinnamon roll at Kusafiri is the real deal and should be your second stop in the park after stopping by Pandora: The World of Avatar. Doubters may think the price of near $9 may be excessive for a cinnamon roll, but remember we are now in a world of $7 pizza slices. If anything the cinnamon roll (which serves two people) can be considered a “value.” Think of it as three cinnamon rolls, a giant one for the “face” and two regular ones for the ears. It is LOADED with extra cinnamon on top, and Disney doesn’t get skimpy with the frosting either. Pro Tip: start your journey in the morning with a colossal cinnamon roll at Kusafiri; in the afternoon stop by Dawa Bar for a sugar cane mojito and walk over to Satu’li Canteen for lunch , and finish your day with a meal at Tiffins.

So there you have it: Six Mickey-Shaped Food at Walt Disney World! See you next weekend for the latest installment of the SATURDAY SIX, where we’ll look at something fun from the world of Disney and Universal. If you enjoyed yourself, be sure to check out The Magic, The Memories, and Merch! articles, or, for your listening pleasure, check out the E-Ticket Report podcast. You can also follow Your Humble Author on Twitter (@derekburgan).

The 6 Most Unique Dining Experiences at Walt Disney World

Special Thanks to crack staff photographer Brandon Glover, Ledo’s favorite customer and Captain Phasma’s ex, @HoCoHowie, hot shot Michael Carelli, and blogger to the stars Megan Stump for their invaluable assistance with this article. Be sure to also check out Brandon on The Park Blogger podcast with goofballs co-hosts Aengus Mackenzie and LitemAndHyde , while fellow Potterheads may enjoy Meg’s work on the Central Florida Slug Club.