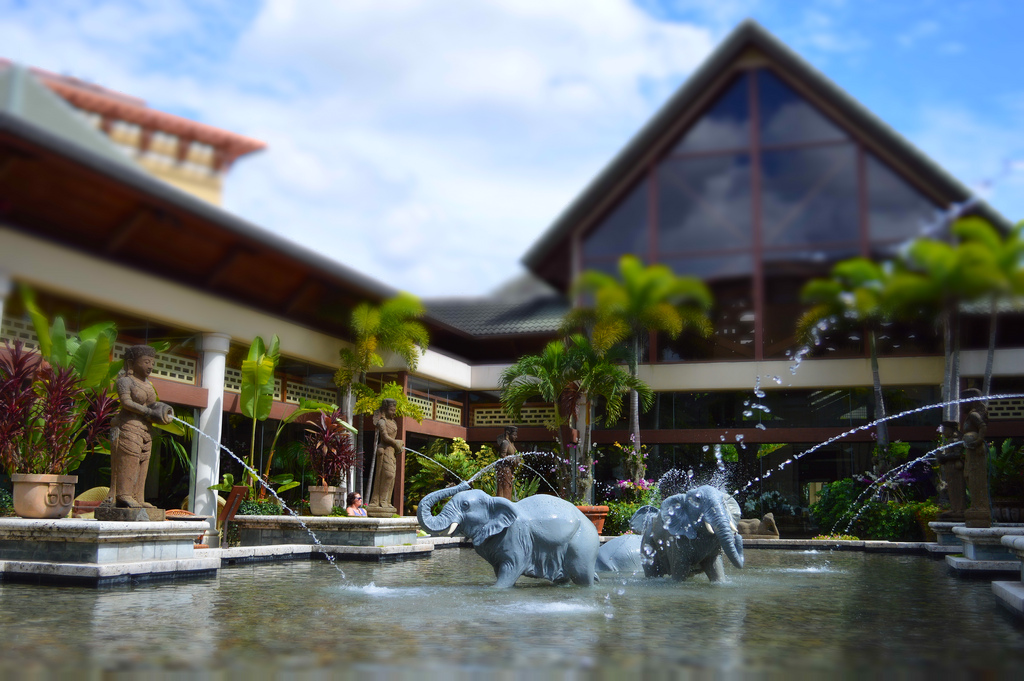 While Disney runs its on-site resorts, Universal partners with a luxury hospitality company in Loews Hotels. One of the benefits of being run by a third party, is that Lowes has a loyalty program with YouFirst. Many of us have been on Disney vacations dozens (if not hundreds) of times, and unfortunately it doesn’t matter if it’s your first time at Art of Animation or your 50th, what you get is what you get. At Universal you start accruing benefits upon your 2nd stay and can earn privileges such as free room upgrades, late checkout, and even a $100 credit.

While I understand the arguments of staying off-site, for my family, staying on-site is one of our favorite parts of a theme park vacation, especially at Universal. Today we’re going to look at what I believe is the best on-site hotel in Orlando. So sit back, grab an ice cold Jake’s Red Lager, and let’s begin counting down the top six reasons we love Universal’s Royal Pacific Resort starting with…

The pool at the Royal Pacific Resort is massive. While it is the only resort at Universal without a slide, it does feature the gigantic Royal Bali Sea interactive water play area connected to the pool. This play area is themed to a ship, features water cannons, and seemingly dumps about a million gallons of water on the people playing around it. When I was a kid all the pools were the same shape: a rectangle. If pools and play areas existed like this, I’m not even sure my parents would have been able to drag me away to go to the theme parks.

For adults, there is plenty of seating, a white sand beach, zero entry, cabanas, two hot tubs, an ice-cream place, and the Bula Bar & Grille. The pool area offers towels, magazines and newspapers to read while laying out in the sun, and games such as ping pong. While there is plenty of covered seating at the Bula Bar, servers will come out to the pool area to deliver drinks and food. Our recommendation: Shipwrecked Loaded Nachos (but you can’t go wrong with the burgers either.)

Right outside the main pool area are several sandy beaches where you can play volley ball, or just sit on a lounge chair and relax. While you can’t swim in the lagoon, you can track down exactly where scenes from Sharknado 3 were shot.

As impossible as it is to believe, outside of the Fort Wilderness Campgrounds, there are no pet friendly Walt Disney World on-site resorts. Meanwhile in our household, our Yorkshire terrier Sebastian is higher up the food chain than Your Humble Author. Not only is the Royal Pacific Resort pet-friendly, but they have an elaborately themed area dedicated just to pets. There’s even a gourmet room service menu for cats and dogs (sorry, I don’t care how long Sebastian gives me the cold shoulder, I had to draw the line somewhere.) There is a charge of $50 a day, but it caps out at $150.

One weakness I would say Universal has as a whole is that it doesn’t take advantage of character dining to anywhere near the degree that WDW does. Character meals are becoming a staple of our theme park vacations at The Mouse including 1900 Park Faire, Cinderella’s Royal Table, Tusker House, and Chef Mickey’s. Universal has very few character dining opportunities, but one you have to do occurs on Sundays at Jake’s American Bar at the Royal Pacific.

The characters include some bunnies from Hop, but the main draw here is Gru and Minions from Despicable Me. These are some popular characters for Universal and – similar to Disney’s character dining – you get a lot of one-on-one time during the meal. As for the actual breakfast there is a buffet of various pastries and fruit, and each guest also gets to order an entree off the menu. The best bet here is the Tahitian French Toast. This was possibly the best tasting breakfast I have ever had in my life. Other options included Hawaiian pancakes, Wisconsin cheddar & 3 egg Scream, along with a steak and eggs dish. You DO NOT have to be staying on-site at the Royal Pacific to enjoy this character dining.

Disney has several resort areas where location is king. Who doesn’t want to stay at one of the monorail resorts and enjoy a quick ride over to the Magic Kingdom? A stay at Disney’s BoardWalk is a hop, skip, and a jump away from both Epcot and Disney’s Hollywood Studios. A room at the Royal Pacific is within walking distance to every single thing at the Universal Orlando Resort. You’re less than 10 minutes door to door from your room to Cowfish. Unlike the Contemporary, where your walk to the Magic Kingdom includes a stoplight and waiting for traffic,  your walk from the Royal Pacific is along a gorgeous garden walkway filled with lush landscaping. One of my favorite things in Orlando is walking from Royal Pacific and the Ocean Trader Market background music from Islands of Adventure’s Port of Entry begins to get louder and louder. It truly is magical.

You don’t have to walk if you don’t want to, as Universal provide complimentary water taxis to CityWalk and there is almost always a pedi-cab more than willing to take you as well (they work solely on tips). For those of you who enjoy an early morning trip to the parks and don’t want to waste any time on a sit down breakfast, the Orchid Court has a grab and go set up with breakfast items that is located on your way to to the water taxi dock.

The Poly at WDW has ‘Ohana and Kona Cafe. The Contemporary has the California Grill, Chef Mickey’s, and the Wave. Animal Kingdom Lodge as Sanaa, Boma and Jiko. I would put the dining offerings at Royal Pacific right up there with the best Disney has to offer, and it is led by Emeril’s Tchoup Chop. With a stunning decor and even better menu (including a robata grill, sushi bar, and a great happy hour,) Tchoup Chop is going to blow you away with a fantastic meal and just so happens to hold a 100% approval rating by the world famous Disney Hipsters. Open for both lunch and dinner,  Tchoup Chop also validates valet parking. What are you waiting for?!!

2A: The Wok Experience at Islands Dining Room

Jake’s American Bar is where you want to go for fantastic burgers and beer, but for our money one of the best meals you’ll have at a theme park resort is the legendary Wok Experience inside the Islands Dining Room. The Wok Experience is $24 per person and includes and all-you-care-to-eat soup and salad bar, along with an unlimited amount of trips to the wok station. Here you combine the vegetables, proteins, and sauce that you want (mixed with noodles or rice) to make a unique dish – cooked right in front of you – that just so happens to taste out of this world.

During busier times of the year the Wok Experience is available every night of the week from 6-9PM, otherwise look for it on Friday and Saturday nights at those hours. Highest possible recommendation.

Our family has vacationed in many areas of the world, but my absolute favorite place we have visited was Hawaii. I love the tranquility and relaxing nature that you find there, and that feeling exists in Royal Pacific’s theme. The entire resort is filled with ambiance in the form of landscaping, torches, and water elements. There are small statues throughout the entire resort, from the Wantilan Luau area to near Emeril’s Tchoup Chop. The pet areas even have animal themed statues. The outdoor courtyard near the lobby is amazing with elephants playing in the water (along with a great sign asking guests not to disturb the elephants). The whole resort has an exotic theme that just draws you in and is the perfect area for either a break during the afternoon after battling the Florida sun, or a great way to unwind after a hard day of hitting the parks. Close walk to theme parks? Check. Great restaurants? Check. Incredible staff from top to bottom? Check. Amenities including early admission to the Wizarding World and Unlimited Express Pass? Game. Set. Match.

For the most part gyms at Disney resorts are relatively nondescript. Universal meanwhile has a gym at Cabana Bay that is probably bigger than the gym in many towns and a gym at the Royal Pacific which includes a spa pool straight out of a Hollywood movie. Tons of cardio equipment, free weights, and Nautilus equipment abound and while you’re working on those FitBit numbers we’ll be over at Jake’s sipping on a cold one.

Halloween Horror Nights is Universal’s signature event, but the event doesn’t stop at the Universal Studios Florida gates. Every year the onsite hotels feature a special HHN inspired room service menu that needs to be seen to be believed.

So there you have it: Six Reasons We Love Universal’s Royal Pacific Resort. See you next weekend for the latest installment of the SATURDAY SIX, where we’ll look at something fun from the world of Disney and Universal. If you enjoyed yourself, be sure to check out The Magic, The Memories, and Merch! articles, or, for your listening pleasure, check out the E-Ticket Report podcast. You can also follow Your Humble Author on Twitter (@derekburgan)

Special Thanks to crack staff photographer Brandon Glover, photo wunderkind Mike Sperduto, and blogger to the stars Megan Stump for their invaluable assistance with this article. Be sure to also check out Brandon on The Park Blogger podcast with co-hosts Aengus Mackenzie and Brian Carey.