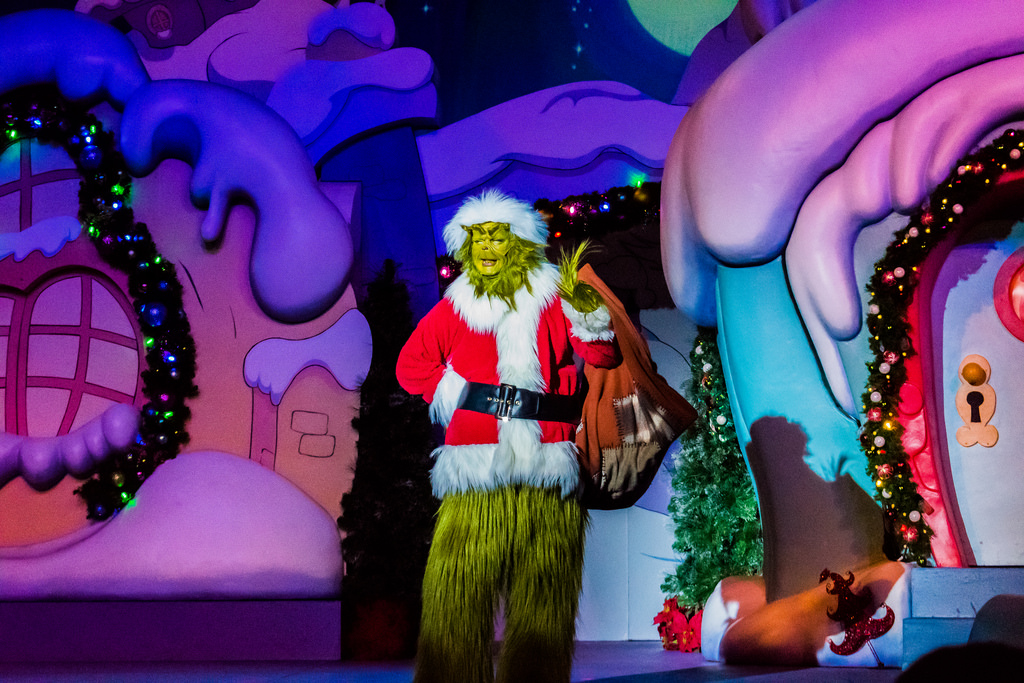 This week’s SATURDAY SIX takes a look at Reasons We Love the Christmas Season at Universal! When it comes to the Universal Orlando Resort and holidays, the one which they are most associated with is Halloween. Each year Universal’s signature event – incredibly popular Halloween Horror Nights – somehow becomes even bigger. Many theme park guests would associate the Christmas holiday with Disney. With Mickey’s Very Merry Christmas Party at Magic Kingdom, Candlelight Processional at Epcot, and all the amazing decorations at various resorts (including the Grand Floridian’s Gingerbread House and the massive Christmas tree at the Wilderness Lodge,) WDW is loaded with festive Christmas spirit. However, over the past few years Universal has quietly put together a great Christmas package as well.

Today we’re going to take a look at some of our favorite holiday offerings at Universal, and let’s kickoff the countdown with…

During most of the year, no theme park can touch The Mouse when it comes to in-park shows. Festival of the Lion King, Finding Nemo – The Musical, and even Beauty and the Beast – Live on Stage are crowd pleasers of the highest order. When the calendar hits December, Universal brings out some big guns that deliver in a major way. The Grinchmas Who-liday Spectacular is a must-see stage show presentation of How The Grinch Stole Christmas, and it combines elements of both the beloved animated version along with the Jim Carrey live-action film. Meanwhile Seuss Landing becomes decorated to the nth degree, and you may even run into Whos in the land putting out even more decorations!

While I’m not a huge fan of the Blues Brothers film starring Dan Ackroyd and John Belushi, I am absolutely in love with the high-energy Blues Brothers Show that takes place daily across from Finnegan’s in Universal Studios Florida. The show is so good that it makes me overlook three things I normally don’t care for inside a theme park: 1) live music 2) standing 3) no shade. The Team Members playing Jake and Elwood (along with their supporting cast) seem to nail it each and every single time. The Blues Brothers Holiday Show takes it up a notch with the boys singing Christmas songs along with doing fun things on stage such as decorating a Christmas tree with packs of cigarettes and beer cans. Peanuts cartoons, Chevy Chase Vacation movies, and Blues Brothers Shows, Christmas just makes everything better.

# 4 – Decorations in the Wizarding World

Starting this year Universal went all-out in decorating the Wizarding World, both in Hogsmeade Village and Diagon Alley. Book readers and film watchers know that Christmas has always been an important part of the Harry Potter Universe (who can forget Ron and Harry getting handmade sweaters from Mrs. Weasley) and now the parks have followed suit with holiday-themed decorations stuffed throughout the lands. With gorgeous wreaths and lighted garland, Hogsmeade Village in particular takes on a whole new look during the day, and really pops at night. Each of the stores in each land have unique decorations for the Potter aficionado to check out, but the average guest will feel completely immersed in Holiday spirit.

When Diagon Alley made its debut back in 2014, one of our favorite surprises was how great the Celestina Warbeck show was. A character only briefly mentioned in the books, the live stage show featuring the Singing Sorceress and the Banshees is a crowd favorite. With lyrics hitting home for any fan of the Wizarding World along with wonderful synchronized dancing, the show is a delight. During Christmas time, Celestina and her Banshee backup singers get new outfits (take that Anna and Elsa!) and we Muggles get to hear several new songs including Accio Christmas, The Most Magical Yule Ball of All, and My Baby Gave Me a Hippogriff for Christmas.

While Disney still rules the roost when it comes to parades with shows like Festival of Fantasy, Universal has made a quantum leap in parade quality over the last several years. This year’s Holiday Parade featuring Macy’s includes 15 new floats and 13 new larger-than-life balloons. The fan favorite minions have increased their presence, and on the Despicable Me float we have have Universal’s first appearance of Lucy Wilde, Gru’s wife. Dreamworks brands such as Shrek and Madagascar are represented, with the whole show feeling like a complete upgrade from years past.

# 1 – The Magic of Christmas at Hogwarts Castle

In a word: AMAZING.

The new projection show at Hogwarts Castle is a flawless display that will have Potter fanatic’s jaws on the ground. With the classic John Williams score playing in the background, Hogwarts Castle comes alive each night with a show which involves classic Potter moments including the Yule Ball, Quidditch, ghosts singing Christmas carols, and a special tribute to our favorite Weasley twins. As far as projection shows go, Universal delivered a product as good as anything you’ll see at Disney (and we LOVE the Tree of Life Awakenings at the Animal Kingdom.)

One of the most popular souvenirs (and snacks) at Universal is the Chocolate Frog available in the Wizarding World. With a box design straight out of Harry Potter and the Sorcerer’s Stone, guests find a rather large chocolate frog inside along with an exclusive Wizard’s card. When Hogsmeade Village made its debut in 2010, the chocolate frog boxes came with card featuring one of the four founders of Hogwarts. Two years ago, during a Celebration of Harry Potter, a fifth card was added to the rotation featuring Albus Dumbledore. This year’s Celebration brought Gilderoy Lockheart. This year Universal added a seventh card, and it features Hengist of Woodcroft, the wizard responsible for founding Hogsmeade Village. This is fan service of the highest possible level.

So there you have it: Six Reasons We Love Christmas at Universal! See you next weekend for the latest installment of the SATURDAY SIX, where we’ll look at something fun from the world of Disney and Universal. If you enjoyed yourself, be sure to check out The Magic, The Memories, and Merch! articles, or, for your listening pleasure, check out the E-Ticket Report podcast. You can also follow Your Humble Author on Twitter (@derekburgan).

Special Thanks to crack staff photographer Brandon Glover, my personal protege Hunter “Elvey” Underwood, the bio-est of all reconstructs @bioreconstruct, Universal’s supreme secret shopper Hedgehog’s Corner, photo wunderkind Mike Sperduto, and blogger to the stars Megan Stump for their invaluable assistance with this article. Be sure to also check out Brandon on The Park Blogger podcast with goofballs co-hosts Aengus Mackenzie and LitemAndHyde , while fellow Potterheads may enjoy Meg’s work on the Central Florida Slug Club.

8 thoughts on “SATURDAY SIX: 6 Reasons We Love The Christmas Season at UNIVERSAL!”