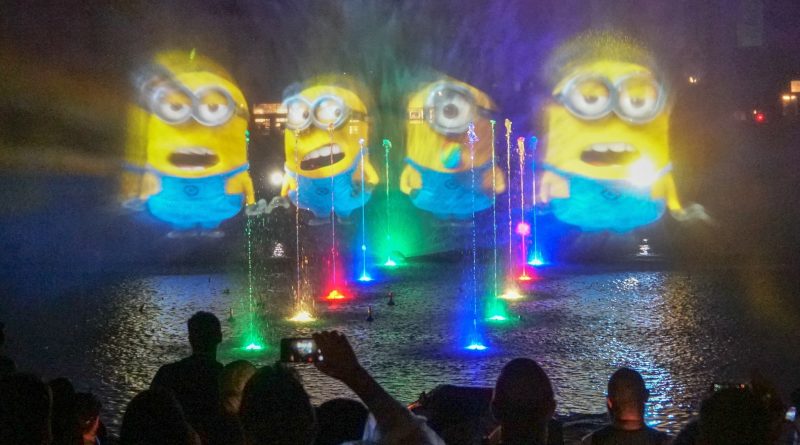 This week’s SATURDAY SIX takes a stroll through the Universal Orlando Resort to see what’s new! While we’ve been covering Toy Story Land, WDW Pressed Pennies, and the Disney Outlet Stores, a lot has been going on down the street at Universal and it’s high time we took a look at some of it, starting with…

Just as Art Smith’s Homecomin’ became our immediate darling at Disney Springs when it opened, readers of this fine blog series should know that Voodoo Doughnuts in CityWalk also holds a special place in our hearts…and stomachs. The creative doughnuts bring a smile to our artistic side, and there is a side benefit that they taste great. Back in June, another new eye-popping doughnut was added to the arsenal, and this one is exclusive to the Universal Orlando Resort. The Universal Orangesicle is inspired by the iconic creamsicle frozen treat, and is even served on a giant popsicle stick. Oranges are synonymous with the state of Florida, and the Orangesicle is covered in citrus frosting, giving it a distinct look. Price of the Orangesicle is $2.65 and UOR AP discounts are available.

One of the most underrated aspects of Voodoo Doughnuts is how many vegan doughnuts they have on the menu. We’ve mentioned in the past they we travel with a vegan diner, and Walt Disney World generally blows Universal away when it comes to vegan options (or any dining allergy for that matter.) However, Voodoo Doughnuts goes above and beyond with a ton of vegan choices, including the jelly filled – and insanely popular – voodoo doughnut with the pretzel stake through its heart. Our vegan diner says that the Portland Cream, Maple Bar, and Apple Fritter are worth going out of your way to try.

Speaking of creative places in CityWalk whose main goal seems to be putting us straight into a diabetic coma, Toothsome Chocolate Emporium is back with some next level bananas CUPCAKES. Served in a plastic mason jar – which is slightly smaller version than the ones used for Toothsome’s milkshakes – the jar makes a nice souvenir for guests. The Toothsome logo is much sharper looking than what is found on the milkshake jars, and is also printed directly on the jar instead of a sticker.  The cupcakes are made in layers alternating between frosting and cake. The cake itself is crumbled and absolutely delicious, while the frosting is right in line with cupcakes across Universal property in being extremely sweet.

Currently there are four options: Death By Chocolate, Birthday Cake, Red Velvet, and a fourth that was unlabeled but appears to be Chocolate Chip. The price of each is $11.95, with UOR AP discounts available.

Another opening day venue at CityWalk has joined the great restaurant graveyard in the sky with NBA City, Latin Quarter, and NASCAR Sports Grille. While some of us are still grieving the loss of Emeril’s Tchuop Chop at the Royal Pacific Resort, Emeril’s Orlando closed up shop this past week in CityWalk. A venue which offered a great dining experience, terrific cocktails (along with an awesome Happy Hour) and the signature banana creme pie, the loss of Emeril’s is a blow to CityWalk. While no replacement has been named, CityWalk has been on a string of smash hits in the area of dining venues including the already mentioned Voodoo Doughnuts and Tootshome, along with restaurants such as Cowfish, Antojitos, and Red Oven Pizza Bakery. So while I’m sad to see Emeril’s go, I’m very excited to see what could be taking its place.

# 3 – Locker System at Revenge of the Mummy Gets Complete Overhaul

Have to admit, I didn’t see this coming and it is one of the best surprises in years! One of the “necessary evils” of Universal is the locker system for thrill rides such as the Incredible Hulk Coaster, Rip Ride Rockit, and Revenge of the Mummy. The lockers are free and are generally easy to use, but more often than not the areas they are located in become a complete clustermess during busy times. Recently the lockers for Revenge of the Mummy were moved from their outdoor location into an indoor area (which used to be part of the standy-by queue.) The new area is much easier to move around in, and we also get to say “buh bye” to the ugly outdoor lockers. A complete win-win situation. Even better news? We’re hearing this is just the first locker situation to be addressed by Universal, and they will looking at applying similar changes to other attractions at the resort. Unfortunately, we also hearing the lockers that need help the most (Forbidden Journey and Escape From Gringotts) are last on the list of overhauls. Regardless, I had given up all hope that any of the lockers would EVER be fixed, so seeing Revenge of the Mummy’s new lockers makes me think Joe Rhode may actually fix that Yeti after all…

Speaking of surprises, it was several years ago now when the Raptor Encounter almost appeared out of nowhere at Islands of Adventure and immediately became one of the most fun meet and greets in all of Florida. Normally, waiting in lines for meet and greets at Disney or Universal can be one of the most mind-numbing experiences at either resort, but the Raptor Encounter is one where its actually fun to see the reactions of other guests as they meet the raptor. To tie into this year’s Billion dollar hit Jurassic World: Fallen Kingdom, a new raptor was added into the Raptor Encounter rotation with “Blue.”

Our favorite Voodoo Doughnuts also got into the Corporate Synergy fun with the release of the Raptor Claw doughnut. Filled with raspberry jelly and covered with chocolate frosting and sprinkles, what has us most excited about this doughnut is the sheer possibility that Voodoo could have unique creations for HALLOWEEN HORROR NIGHTS….

Hallelujah! After years of trying, Universal has finally delivered a nighttime spectacular that can compete with Disney’s. Okay, it doesn’t quite meet the levels set by Happily Ever After or Illuminations, but the new Cinematic Celebration show in Universal Studios Florida holds up quite nicely compared to Rivers of Light and Seth Kubersky – author of The Unofficial Guide to Universal Orlando – likes it more than Fantasmic! at DHS. One feature that has made the show more enjoyable to watch than others held in the same lagoon is the fact that there is a centralized location in Central Park for the viewing audience. In previous shows, such as Cinematic Spectacular, guests could watch the show from literally anywhere around the lagoon, causing sightlines to range from “good” to “awful.” Its impossible to serve that many masters, and just trying to ends up disappointing a majority of them. With a more organized viewing area, Universal Creative can focus its efforts on the actual show, and boy did they. With the combination of fountains, water screens, projection mapping, and fireworks, the show displays many of the Universal park’s insanely popular brands (including Harry Potter, Fast & the Furious, and Despicable Me)  and conclude with a rousing – by Universal’s standards at least – finale. One thing missing was a tribute to previous franchises, such as Back to the Future and Jaws, but I can see the decision being made to focus on brands that guests can experience in the park. It was great to see the inclusion of many Dreamworks properties, including Kung Fu Panda and How To Train Your Dragon, and hopefully its a clear sign of those properties about to become a major influence in the parks.

On August 16th, the newest onsite hotel at Universal opens with AVENTURA. The first hotel in Orlando targeting Millenials with its patented “fidget spinner” design, Aventura in all seriousness brings a lot to the table (besides some incredible price points.) The roof top Bar 17 Bistro is going to offer some of the best views in the entire resort, while the recently announced Urban Pantry food hall looks to redefine what guests can expect at a food court. Gourmet pizzas and a wok station? Sign us up! TouringPlans’ own Brian McNichols will be staying at Aventura during its opening week, and we’ll be doing our best to make sure he takes at least some of his photos in “landscape.”

We said many times that one of the best souvenirs at Universal are the Chocolate Frogs. Not only are they straight out of the Potter movies, they are affordable and small enough to bring home for friends and family that might not be able to make it to Florida. When the chocolate frogs debuted with the Wizarding World, they had a random selection of four cards that featured the Founders of Hogwarts. In years since, several other cards have been added to the mix including Albus Dumbldore and Gilderoy Lockhart. Usually the cards are added during a special event, such as the annual A Celebration of Harry Potter. However, in a great surprise Universal dropped a new card into the rotation out of nowhere with the debut of Jocunda Sykes. One thing is for certain, some of these cards go DEEP into the Potter mythos. Jocunda Sykes is known as the first witch to ever cross the Atlantic on a broom (which you should have known from reading Quidditch Through The Ages.)

At $16 a pop, there is now a new E-Ticket balloon on the market.

So there you have it: The SATURDAY SIX Takes A Trip to the Universal Orlando Resort! See you next weekend for the latest installment of the SATURDAY SIX, where we’ll look at something fun from the world of Disney and Universal. If you enjoyed yourself, be sure to check out The Magic, The Memories, and Merch! articles, or, for your listening pleasure, check out the E-Ticket Report podcast. You can also follow Your Humble Author on Twitter (@derekburgan).

The 6 Best Gift Shops at the Universal Orlando Resort

Special Thanks to our spirit animal Brandon Glover,the bio-est of all reconstructs @bioreconstruct, the sweet siren of Universal secret shopping @HedgehogsCorner, the SAT SIX Fun Squad of Parkscope Joe and Nick, hot shot Michael Carelli, the sommelier of Tony’s Town Square Brian Carey, and blogger to the stars Megan Stump for their invaluable assistance with this article. Be sure to also check out Brandon on The Park Blogger podcast with goofballs co-hosts Aengus Mackenzie and LitemAndHyde , while fellow Potterheads may enjoy Meg’s work on the Central Florida Slug Club.