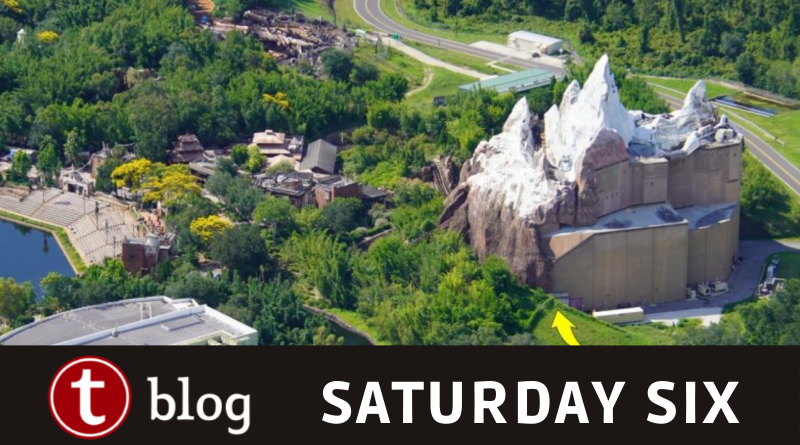 This week’s SATURDAY SIX takes a look at Disney Details You Can ONLY Get From a “Bird’s-Eye View! Grab a Dramamine and buckle up, because today we’re hoping into the blogger high-in-the-sky copter with @bioreconstruct and checking some interesting Disney details that we can only get from up above, starting with…

While Fantasmic! has yet to have shows since the coronavirus shutdown back in March, over the years Bio has taken some unique photos of the theater where the show is held. Below is a test held during the day for the show’s water screens.

Because the show is currently under an extended downtime, the water that surrounds the stage has been drained.

However, with Fantasmic! drained and us being able to see everything from high above, it allowed Disney fans  to point out something that most guests would never know… 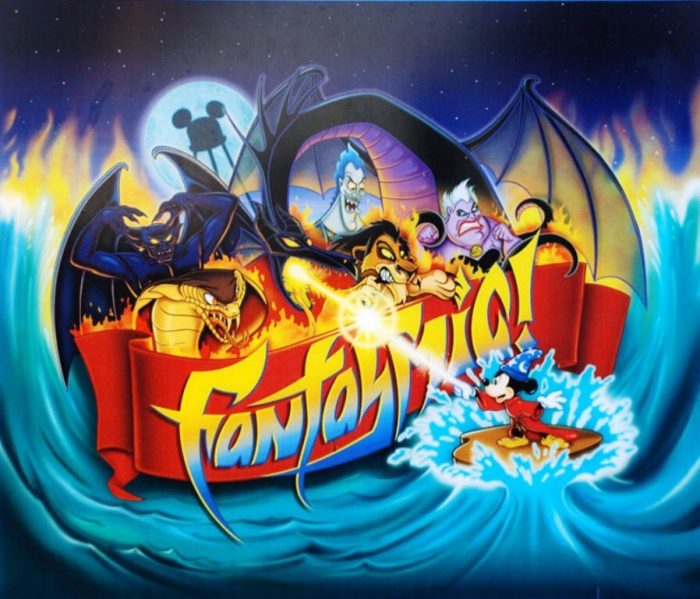 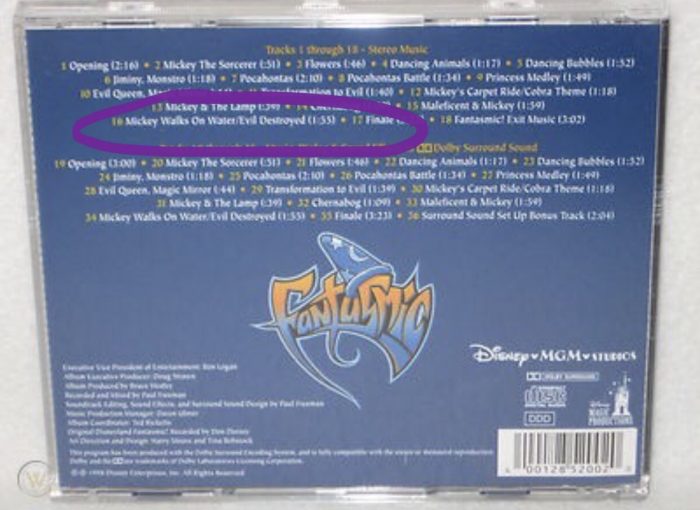 Let’s take another overhead look at the theater…

Showing the spot where Mickey was originally intended to “walk on water” during the show.

Us guests on the ground often marvel at the incredible work by Disney Imagineers, but like a good magic act, a lot of what we are seeing is an illusion. Take for example the facade for the Dinosaur attraction at Disney’s Animal Kingdom. Guests approaching the building are first going to notice the impressive Aladar figure out front, with the Dino Institute in the back. Looking at the building, we see trees and shrubbery in the near background. This tricks our mind into thinking we’re walking into a building that “can’t” be that big, right?

Up in the air, we can see that Disney cleverly disguised the massive show building we are about to enter by planting trees on top of the building!

Staying in Animal Kingdom, let’s take a quick peek at Pandora: The World of Avatar. Guests walking into the land are always blown away by the magnificent “floating mountains” and the incredible rockwork behind them.

With an aerial view, we can see that this rock work and design is meant to block the view of a show building that makes the one for Dinosaur look small in comparison!

Anyone familiar with “Hollywood” and the art of movie making knows that when it comes to building a film set, you only spend time on details which will be seen by the camera. The same applies for theme parks if we replace “camera” with “guest.” Take Expedition Everest, one of the most brilliantly themed roller coasters in the world. (At least that’s our opinion. Others consider it a “nondescript coaster themed to India or whatever.”) Every aspect of Everest looks INCREDIBLE to those on the ride or looking at the attraction from inside the park.

However, this aerial photo from behind Everest shows that the back part of the attraction isn’t themed at all.

For a time, guests could see Walt Disney’s private plane on display at Disney’s Hollywood Studios on the Studio Backlot Tour. Now that the tram tour has been replaced by Star Wars: Galaxy’s Edge, the plane has been moved “backstage” and can’t be seen by guests. However it can be seen by aerial photos.

Walt flew in this plane while originally surveying the land which would eventually become Walt Disney World.

For both safety and secrecy concerns, theme parks do their best to keep construction projects hidden from the view of guests and those pesky theme park bloggers. However, thanks to aerial photos we get a sneak peek of construction projects and major refurbishments. Now, to be honest many guests just simply don’t care about construction projects. “Show me it when it’s finished,” would probably be the most common answer if asked. For others though – and most likely many that would be reading a blog like this – construction updates are one of the things we love the most. To see the incremental changes over time. To whet our appetites for experiences we will have in the near future. A reminder that the parks and resorts we know and love are in a constant state of change, updating themselves for our enjoyment.

For me personally, my favorite aerial photos are the ones that put everything in perspective. The size and scope of both Disneyland and (especially) Walt Disney World is almost impossible to comprehend from the ground. From the air, we can see how all the pieces fit together to make this wonderful puzzle come to life.

I don’t care who you are, this is cool.

So there you have it: Six Disney Details That You Can ONLY See From The Air! See you next weekend for the latest installment of the SATURDAY SIX, where we’ll look at something fun from the world of Disney and Universal. If you enjoyed yourself, be sure to check out The Magic, The Memories, and Merch! articles covering the latest from the Disney Outlet Stores. You can also follow Your Humble Author on Twitter (@derekburgan).

5 thoughts on “SATURDAY SIX: Disney Details You Can ONLY Get From a “Bird’s-Eye View””