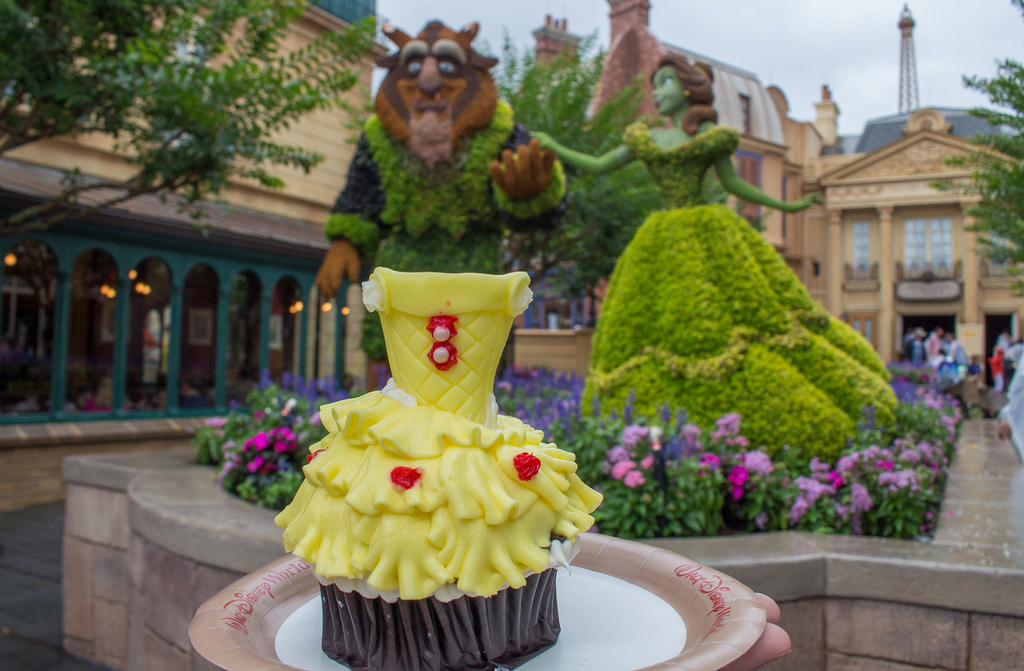 This week’s SATURDAY SIX takes a look at some new snacks and drinks at Walt Disney World! From the iconic dole whip at the Magic Kingdom to zebra domes at the Animal Kingdom Lodge, we love our snacks at WDW. Recently there have been several must-try items added into the mix. These include some returning favorites along with some brand new snacks  loaded with enough sugar to send you straight into a diabetic coma. First up…

Our first “snack” is one that made its original debut in the parks in 2017. That’s right, last year Disney themed Share a Coke bottles appeared on property and had three options available including Main Street, Space Mountain, and “at the Castle.” This year we have four different areas to choose from, again all from the Magic Kingdom; Haunted Mansion, Jungle Cruise, Tomorrowland, and Big Thunder. Here’s hoping this is successful enough to grow even bigger in 2019, because who wouldn’t bottles with Spaceship Earth, Tower of Terror, and TriceraTop Spin (okay, maybe not the last one.)

# 5 – House-made S’mores at The Ganachery

Another welcomed return came in the form of the House-made S’more at The Ganachery in Disney Springs. Made to order, this is hands down the best S’more you’ll ever eat. The general quality of the chocolate available at The Ganachery is outstanding and worth going out of your way to try during your next Disney vacation (PRO TIP: one thing to keep in mind is that you can actually order some items from The Ganachery from Shop Disney Parks and have them shipped directly to your house.)

So you have some high end chocolate combined with a giant square of vanilla bean marshmallow, all sandwiched between two large graham crackers. If that wasn’t enough, you get to watch the Cast Members use small blowtorches to heat up your S’more and you get a cute Mickey head in powdered sugar on top. For $8, this better be a good S’more, and it is. In fact, it’s great.

While not exactly new, we’ve wanted to cover the Smoke ‘n Roses drink at the Phins lobby bar in the Walt Disney Dolphin for a while now. We love when Disney  go above in beyond in terms of presentation – such as the Seashore Sweet at AbracadaBar or the Kitchen Sink at Beaches & Cream – but the Smoke ‘n Roses sets a new standard. Served in their “signature smoke box,” the Smoke n’ Roses is made with Four Roses small batch bourbon, Bliss maple syrup, Amarena cherry juice, and fresh lemon.

Disney guests who love their school bread at the Norway Pavilion were on red alert when the Kringla Bakeri closed in March for a major refurbishment. However, as the saying goes when God closes a door, He opens a window, but in this case it’s when Disney closes a quick service they open a kiosk. At the Midnattsol Bakeri kiosk they have our beloved school bread, but they also had the debut of the incredible Viking Dog.

Of course, when we first heard word of a new giant hot dog at EPCOT, we were a little hesitant. After all Disney did deliver the Idaho Dog (with a potato as the bun) along with a series of “Hot Dog of the Month” at Casey’s Corner that have to be seen to be believed. The description of the Viking Dog also had us worried as it promised a ONE POUND hot dog topped with purple cabbage, bacon, spicy mayo, and fried onions. However all the flavors complimented each other and the dog is certainly big enough for sharing. Like the S’more above, make sure you have plenty of extra napkins as things are going to get messy, but it’s well worth the hassle.

If you needed any proof that Instagram was taking over the world, note that many Disney food and drink items seem geared now more for pictures than actually eating or drinking. We have the purple wall slush over at Disney’s Magic Kingdom, while at EPCOT we have the Belle dress cupcake. An incredible design that looks like something you would see being made on the Food Network, the actual taste of the cupcake is one we unfortunately have to say NAY NAY to. The base of the cupcake is chocolate and for some reason there is a cherry inside. The frosting is lemon flavored and if you’ve ever wondered why you don’t see many companies mixing lemon and chocolate…well now you’ll know why. THAT SAID, this cupcake looks fantastic.

Beignet sundae. Rarely have two words made our heart flutter both figuratively and literally. One of the all time greatest accomplishments by man, Disney’s Port Orleans French Quarter now has a dessert where you combine the warm goodness of their delicious beignets, along with a selection of ice cream (chocolate, vanilla, cookies & cream, cookie dough, coffee or raspberry sorbet) and then topped with chocolate sauce & whipped cream. Perfection.

So there you have it: Six New Disney World Snacks You Gotta Try! See you next weekend for the latest installment of the SATURDAY SIX, where we’ll look at something fun from the world of Disney and Universal. If you enjoyed yourself, be sure to check out The Magic, The Memories, and Merch! articles, or, for your listening pleasure, check out the E-Ticket Report podcast. You can also follow Your Humble Author on Twitter (@derekburgan).

Special Thanks to our spirit animal Brandon Glover, my personal protege Hunter “Elvey” Underwood, the Sommelier of Tony’s Tony Square Brian Carey, and blogger to the stars Megan Stump for their invaluable assistance with this article. Be sure to also check out Brandon on The Park Blogger podcast with goofballs co-hosts Aengus Mackenzie and LitemAndHyde , while fellow Potterheads may enjoy Meg’s work on the Central Florida Slug Club.