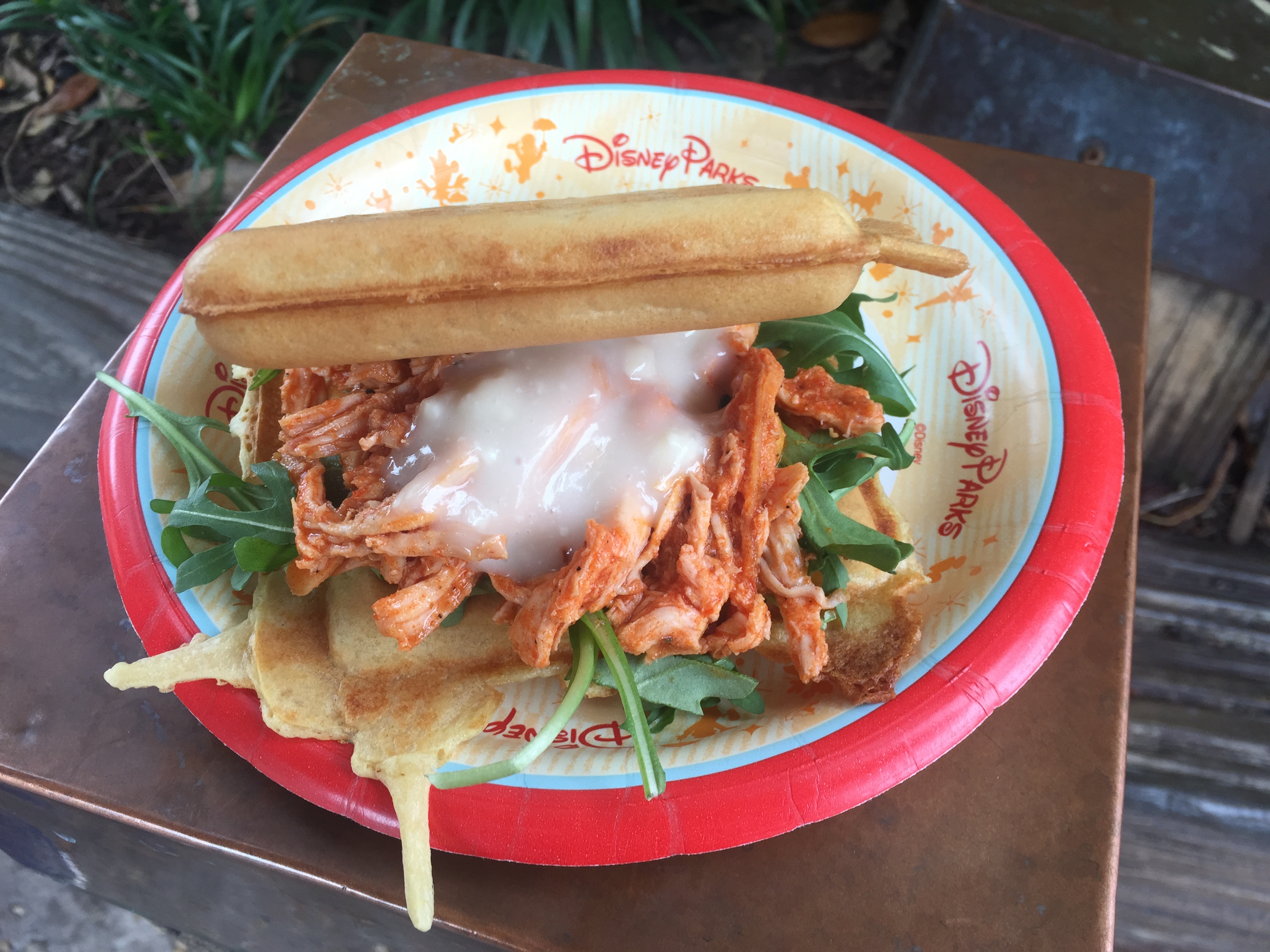 A little more than a year ago, I reviewed ideas for savory snack credit “meals” available throughout Walt Disney World. For many people on the dining plan, snack credits become money that ends up being hastily spent or not spent at all. Although some snacks should be used one per person (for instance, Mickey bars), boxes of popcorn or pretzels are often shared, leaving many people with leftover snack credits. Some people use these snack credits to bring home cookies or candy, and I’ve even seen one woman use 20 snack credits to buy out all the oranges at Art of Animation to bring home “Florida” oranges for her housesitter. Thankfully, there are some lesser-known options that can be used as a light meal with just a dining plan snack credit. Many new and exciting options have come to Animal Kingdom. Here are some of the best. This one appeared in my previous article, but I wanted to mention it again because I think it is the single best savory snack credit meal at Walt Disney World. For one snack credit, you get a container of chicken fried rice that is very suitable for a lunch. Although the quality is the same with any takeout Chinese restaurant, the value for this one stands out time and time again. There’s also a pork eggroll on the menu that is also a snack credit option. On the paths from Discovery Island back to Asia, there are a couple of permanent kiosks that offer a small assortment of foods. One of these, Eight Spoon Café, has a baked three cheese pasta on the menu for a snack credit. There is a reason why cheese comes first in the description. The sheer volume of cheese on this pasta is insane. My family split it three ways to each try a bit, and by the time I was done, it felt that my blood was replaced with cheese sauce. That said, it is a great option if you have a mac ‘n’ cheese lover in your party, as many of the other snack credit options can be a bit challenging for adventurous eaters. Another one of the small kiosks between Discovery Island and Asia is The Smiling Crocodile. Here there are two options for your snack credits. The first is cheddar grits topped with a “healthy” helping of pulled pork. It also comes with pickle slices on it, and according to the menu board, they’re bread and butter pickles. (I’m not a fan of pickles, so to me they all taste disgustingly the same no matter what jar they come out of.) I personally preferred this to the three cheese pasta because it was a more satisfying “meal”, but I would have preferred more BBQ sauce on the pork instead of the aforementioned pickles. The other option here is a chicken drumstick with potato salad. In general, I’m leery about potato salad served, well, almost anywhere because I fear all sorts of potential for food poisoning. That said, Disney has done a great job with this as the potato salad was so cold that if it had been any colder, it would have been frozen. It was your garden variety potato salad from the tub, however. Where this really shines is the chicken drumstick. My daughter is a very picky eater, but we were able to peel off the skin, which had a bit of seasoning on it, and she pretty much devoured the whole drumstick. I believe this chicken drumstick may be the same one served on the kids’ menu at Flame Tree (which is right around the corner). And yes, this dish also included those pickles. I would gladly order this again, but with the pickles left off. It’s no secret that I feel almost any food can be improved by putting it on a waffle. Needless to say, this was my favorite dish of the day. The chicken does pack a bit of heat, but isn’t horribly overpowering. The blue cheese dressing and greens provide additional flavor. But the waffle is really the star here. This is an item that I would gladly grab for a meal whenever I’m in Animal Kingdom and need a quick meal to go, on the off chance I pass it on my way to Dinoland.

Falafel with Tzatziki, Samosas with Mango Salsa, and Hummus with Vegetables and Mini Pitas at Mr. Kamal’s Mr. Kamal’s, located on the path between Asia and Africa behind the Tree of Life is a snack credit feast. These three small snack credit options make a wonderful combination. First, we tried the falafel with tzatziki. Falafels can vary greatly, and these had a surprising amount of spice to them. This was balanced well with the tzatziki sauce. Although it was not a full-on meal, it was a great option for a snack that felt like it was at least a little more healthy than a churro. The order included five small, meatball-sized falafel balls. A real surprise was the samosas with mango salsa. First, these were itty-bitty bite-size samosas, and not the larger ones that most people may be expecting. This actually was great for us, as it was much easier to share this snack than if it had been one or two large ones. The samosas had a good flavor, and while the potato filling was not devoid of heat, it was much less noticeable than in the falafel. The mango salsa had a mild flavor and really accented the samosas. Think of it almost like a sweet and sour flavor to go with the samosas. To round things out (and because my daughter wouldn’t eat either of these options), we also got the hummus with vegetables and mini pitas. This isn’t a dish that is something to go out of your way for, and probably isn’t something I’d order again. That said, if you take one of the mini pitas and stick a falafel in it and top it with mango salsa, you’ve got a wonderful two bite sandwich full of flavor. Part of the problem with the hummus was that the flavors of the samosas and falafel were so robust that the hummus ended up tasting flavorless. If you ordered it by itself, it would be a good and healthy snack. It just isn’t anything exceptional in my book. The two mini pitas and few pieces of carrot and celery were appropriate dippers for the amount of hummus provided. Across from Mr. Kamal’s, there is another booth that offers edamame for a snack, but also provides a fantastic beef slider. After eating all of the items mentioned above, I was not all that excited about one more dish. Once I took a bite of this, however, I wished that I had ordered one just for me. Ironically, what makes this slider so good is… the pickle. Technically, it is a cucumber that is prepared as a “fresh pickle” and not the jar variety served elsewhere. The result is a slightly tangy and incredibly crisp cucumber slice that offsets the sweetness of the teriyaki sauce on the beef. There is often a line for this particular booth, and with the great flavor provided in this small slider, it is easy to see why.

Menus change over time, and some of these food kiosks are only open on busy days. Still, I am thrilled that Animal Kingdom offers these savory bites, and as their popularity continues to grow, I hope to see additional savory snack items showing up all around Walt Disney World property.