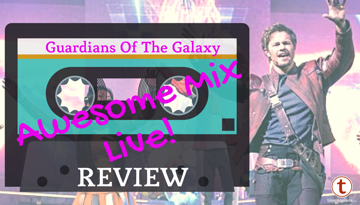 According to legend, as Walt Disney was lying on his deathbed, he stared at the ceiling tiles and mapped out his vision for Walt Disney World’s EPCOT, a forward-thinking community where people from all nations could gather together, share their culture and technological innovations, and enjoy classic pop songs performed by comic book characters. Okay, we’re pretty sure that last part wasn’t part of Walt’s original “Florida Project” plans, but that hasn’t stopped the modern-day Disney company from dropping Guardians of the Galaxy – Awesome Mix Tape Live! into Epcot’s American Gardens Theater to entertain the summer crowds.

This is far from the first time that World Showcase’s premier amphitheater has tried to beat the heat with vintage tunes; the Sounds Like Summer cover band concert series ran there for several years before being canceled in 2017. But this time around, Epcot’s entertainment team has cut out the middlemen by building their own classic rock group, and fronting it with two fan-favorite Marvel heroes: Peter “Star-Lord” Quill, and Gamora. The show’s paper-thin premise is that a Xandarian Chamber Orchestra has been sent to Epcot as cultural outreach ambassadors. Star-Lord soon arrives with a sword-swinging Gamora in tow to teach them how to play retro hits from his home planet Earth, instead of their usual atonal alien intonations.

Despite their box office popularity, the Guardians of the Galaxy seem to be developing a history of making Disney diehards hyperventilate. The conversion of Disney California Adventure’s Twilight Zone Tower of Terror into Guardians of the Galaxy – Mission: Breakout! was bemoaned by many… at least until the reimagined ride reopened, and quickly rose to the top of Disneyland Resort’s guest satisfaction surveys. Similarly, when Guardians of the Galaxy: Awesome Mix Tape Live was first announced, you could practically hear the eye-rolling from old-school EPCOT admirers, who predicted the show would be the worst shoehorning of an intellectual property into World Showcase since 1994’s Magical World of Barbie.

Well, get ready for a twist more shocking than the end of Infinity War, because it turns out that the Guardians of the Galaxy know how to throw a pretty great party. The thematic justification for the venue is vaporous at best, but taken on its own terms, Awesome Mix Tape Live turned out to be far more entertaining than anyone could have predicted. We’re not saying anyone should skip their Soarin’ FastPass just to see it, but if you aren’t on a tight touring plan, it’s worth stopping in for a performance while in the back half of World Showcase.

Here are six reasons why Guardians of the Galaxy Awesome Mix Tape Live is unexpectedly non-awful:

Wisely, this show is all about the songs, and the selections include the cream of the crop from both Guardians of the Galaxy movie soundtracks. It kicks off with Blue Suede’s Hooked on a Feeling, whose iconic “Ooga-Chaka” intro is indelibly linked to the first film’s trailer; we were disappointed when the tune wasn’t picked as one of the random options in the Mission: Breakout ride, so it’s great to hear it here. That’s followed by Redbone’s “Come and Get Your Love,” Pat Benatar’s “Hit Me With Your Best Shot,” and Queen’s “Don’t Stop Me Now,” with “I Want You Back” by the Jackson 5 capping off the twenty-minute set. Every song is a certified crowd-pleaser, and there are no down-tempo numbers to sap the show’s momentum.

Disney probably could have gotten away with a glorified meet-and-greet using pre-recorded music (like the Guardians of the Galaxy dance party in DCA), but instead they went all out with a six-piece live band, consisting of a keyboard player, drummer, bass and lead guitarists, and a pair of horn players. That’s more instrumentalists than some Broadway touring companies employ these days. Better yet, this band really rocks, and their energy elevates what could easily have otherwise been cosplay karaoke. Kudos also go to the sound crew, who give the mix just enough bass to make you want to bang your head, without blowing out the vocals.

Those vocals are delivered by a lead male vocalist with silvery cybernetic makeup; he’s backed up by a pair of purple females who do the heavy lifting by harmonizing, and occasionally take the spotlight. There are two rotating casts, and their vocal talents range for “pretty good for a theme park” to “why aren’t you famous yet?” In fact, actress Michelle Knight was in the Broadway cast of Jersey Boys, and starred off Broadway in Disenchanted. Legends like Michael Jackson and Freddie Mercury are hard acts to follow, but this cast has the professional pipes to do their songs justice.

For a short-term production, Disney apparently invested a surprising amount of money, starting with the wall of supersized LED screens behind the stage, which display adorable new animations of Baby Groot. Then there’s the pyrotechnics, which range from blasts of fog and fire to spinning sparklers and roman candles. And don’t overlook the movie-quality costumes and makeup for the cast and crew. Awesome Mix Tape Live has been dismissed by some as nothing but a quick cash grab, but the superior stagecraft suggests otherwise.

Star-Lord and Gamora don’t sing during the show, and they don’t do stunts, though Gamora gets in some martial arts acrobatics during a girl-power moment. But they do bind the production together with their between-song banter, and these performers do a fine job embodying their character’s cinematic personas. The actors playing Peter Quill have to work particularly hard, since their hairpieces are fairly hilarious – though vastly improved over the wigs used at previous meet and greets – but these guys manage to pull off Chris Pratt’s charming schmuck shtick to a T. And if you were a fan of Universal Orlando’s Halloween Horror Nights, you may recognize P.J. Gajda from his years playing Bill S. Preston in Bill & Ted’s Excellent Halloween Adventure.

Speaking of Bill & Ted, you might detect an echo of their banter in the back-and-forth between Star-Lord and cohorts. That’s because new Guardians show was written and directed by J. Michael Roddy, who was a writer for Universal’s parody show during the late 1990s. This show’s style will also seem familiar if you’ve had the good fortune to sail on a Disney Cruise with a Marvel or Star Wars day at sea, since Roddy has helmed the theatrical productions for those as well. Sure, the storyline isn’t exactly Shakespeare, but the dialogue does a credible job of capturing the characters’ voices without becoming inaccessible to viewers unfamiliar with the franchise. And Star-Lord manages to land a couple pop-culture punchlines that made us laugh out loud.

Guardians of the Galaxy – Awesome Mix Tape Live is currently being performed five times each day, and is scheduled to run through August 19. The first show of the day at 1:30 p.m. is the least crowded, followed by the last at 8 p.m. Seats in the front are shaded from the elements, but benches further back give a better view of the screens and stage effects.

If you can’t see the show in person, we recorded a livestream of a recent performance that you can replay of below:

Finally, if you’re still not convinced that the Guardians of the Galaxy belong in Epcot, our advice is to start getting used to it. Because as you can tell from this photo of their roller coaster’s massive new show building (as seen from the parking lot), you’re going to be seeing a lot more of them in the future.

2 thoughts on “Six Reasons Not to Hate Epcot’s “Guardians of the Galaxy — Awesome Mix Tape Live!””