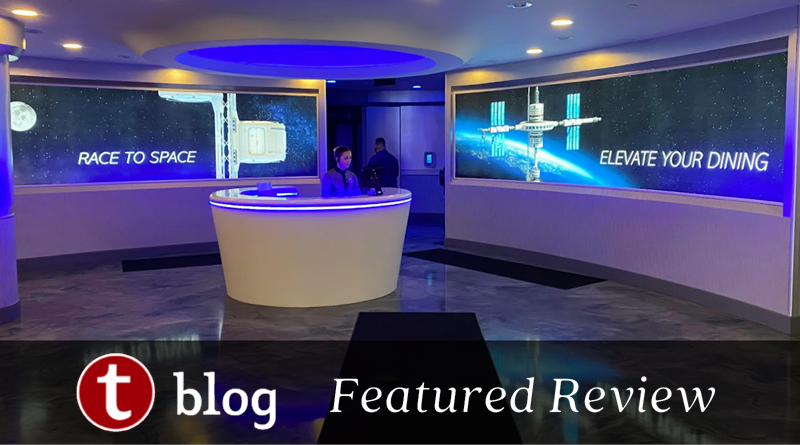 Space 220 is a highly themed restaurant in the World Discovery section of EPCOT. The meal is prix-fixe and is three courses for dinner. It is only two courses, at a lesser price and with a somewhat different menu, for lunch; our review covers some dishes that are on the lunch menu.

After arriving at the restaurant you’ll check in downstairs, then receive your boarding pass for a trip to the Centauri Space Station where the restaurant is located. You’ll board the elevator for a ride with some very well done effects where you can watch EPCOT recede as your vehicle rises up the gantry to your dining destination. 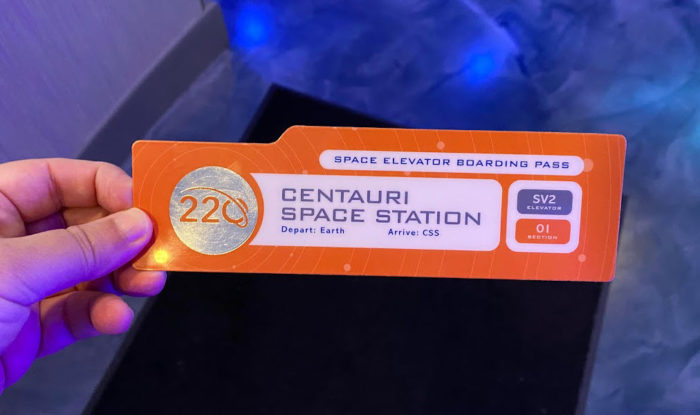 Upon debarking your “transport”, the theming continues at the restaurant’s entry and culminates in a “window into space” that wraps around the circular restaurant. During your meal, you’ll be able to watch a variety of space activities through the window.

The restaurant has a few tiered platforms to let all diners have a good view of the windows, and the top tier is the Space 220 Lounge. If you would like to visit the CSS but don’t want to commit to the prix fixe meal, the Lounge has a bar bites menu with individual pricing. (You can also order the prix fixe meals at the Lounge).

At the time of our visit, lunch was priced at $55 and dinner at $79. DVC-member discounts are available at lunch and dinner, but only lunch is eligible for an Annual Passholder discount. Since Space 220 is in-park dining, you’ll need both a dining reservation and a Park Pass reservation for the date of your meal (or the ability to park-hop if you’re dining after 2 p.m.)  Space 220 is currently a very hot ticket and if you’d like to dine here you should plan to book as soon as your dining reservation window opens.

Of the five appetizers we tried, the only disappointment was the calamari. It was OK, but no better than you’d find at a chain family restaurant such as Applebee’s or 99.

The Caesar salad was definitely a cut above chain restaurant quality, but didn’t manage to make quite far enough up the ladder to be truly top notch.

The tuna tartare was a nice mix, the kind that leaves you with more flavors than the tuna on its own but without a single contender that knocks out the rest. All the raw tuna lovers at our table enjoyed it.

The Burrata was excellent. It’s hard to make the burrata itself taste bad, and really the cheese itself is a product that doesn’t vary that much. So the quality in a burrata dish is all about the other components. The arugula here was nicely dressed, with the addition of artichoke hearts and sunflower seeds that made a nice little salad instead of an afterthought. The tomato was tangy and a bit acidic, but I didn’t find this to be a fault.

The cauliflower was everyone’s favorite. I don’t know who thought this up, but we all thought it was the bomb. The breading was firm enough to have a solid crunch, but light enough not to feel heavy like a fried food can. And the mix of blue cheese dust and hot sauce made the whole thing feel like cousin to a chicken wing, but the much lighter cauliflower left you feeling like you would definitely still have room for dinner.

On first take, it really felt like the sauce hadn’t been properly defatted and was overly greasy. But it turned out that the short rib had been braised to just a hair drier than you might have expected; when pulled and married with the jus it was a tasty, moist mouthful with just the right amount of fat to carry the flavor. The vegetables still had a bit of crunch, and the grits were perfect – firm enough to hold up the short rib, but soft enough to melt in your mouth. I really enjoyed this and would order it again, but I’m not sure it’s a sign of greatness that diners have to figure out to mop the short rib in the sauce to get the proper flavors.

This was a nice dish, but I don’t know how you get “potato stew” from “crispy potato strands”.  I mean, I love a good crispy potato strand as much as the next person (maybe more), but this dish didn’t much match expectations based on the description. And the fish was tasty, but it was also a bit dry, which is something I don’t want to see in top-level cuisine. This was everyone’s least favorite dish, and it was still OK … but this is definitely a menu where you can do better than just OK.

It is pretty easy to make filet and mashed potatoes taste not great, but it’s also hard to make them so great that you can rave over them the way you can about a dish that really had some daring in it. As with the short rib, the vegetables here were perfectly cooked and still had a bit of bite, a good thing.  The mashed potatoes were very nice but not amazing, and the filet was very competently cooked to temperature with a well-executed red-wine reduction.

For anyone who is in the mood to order steak and potatoes, you may rest assured that if yours is anything like ours it will be delicious and extremely satisfying. But if you are looking for something a bit more out of the mainstream, I’d choose the short rib (even with its minor flaws) over this, or try one of the other dishes that we didn’t get a chance to sample.

Supplementals – these dishes are an additional fee

We live in the Northeast, and lobster is often available to us at quite friendly prices provided that we’re willing to cook it ourselves. So when we pay as much as we did for the lobster here, we’re paying for a preparation that is much fancier than your basic boil or steam – and this did not disappoint in the slightest.

The tail meat was perfectly cooked, as were the claws, and the whole washed in a buttery, tangy sauce that clung to the meat. The crab in the interior had been cut small to allow the sauce to meld it together. Just yummy. If you’re in the mood for a splurge, this is a good pick.

If this had been a smaller ribeye and without the upcharge, I would put it among the best dishes that we ate. But the temperature was uneven, with the edges cooked to a different temperature than the portion near the bone, and that made it feel not quite worth the upcharge. Perhaps it’s not fair to hold a dish to a higher standard because it costs more, but I generally do.

All the desserts were very good; opinions at our table were based more on individual preference than the desserts themselves. Those who liked coconut were fans of the panna cotta; those who didn’t like coconut weren’t. Those who liked chocolate and cheesecake thought the chocolate cheesecake was a nice, light preparation that was a good dessert after a big meal, but it wasn’t so amazing that it was able to win over the chocolate averse.

My personal favorite was the carrot cake; it was moist and firm and the pepitas added texture and some depth of flavor – they were a nice touch. The dish that made the least impression on anybody was the Short Cake, which didn’t particularly taste of matcha.

This is not a cheap meal, and of course part of what you’re paying for is the theming and the experience. For us, that theming was absolutely top-notch, extending beyond the big window and into every aspect of the design including the choices of tabletop and silverware.

We found the food to be more uneven. Some dishes were good enough to justify their price even in a more “regular” restaurant, some were close but didn’t quite make the bar, and a few were nothing I’d order again off any menu. On the whole though, we enjoyed our meal, and the food was good enough that I would be willing to come back and do the full dinner again even though I could get a much cheaper version of the themed experience by making a reservation in the Lounge.

Have you dined at Space 220? Did you have a “stellar” experience? Let us know in the comments!