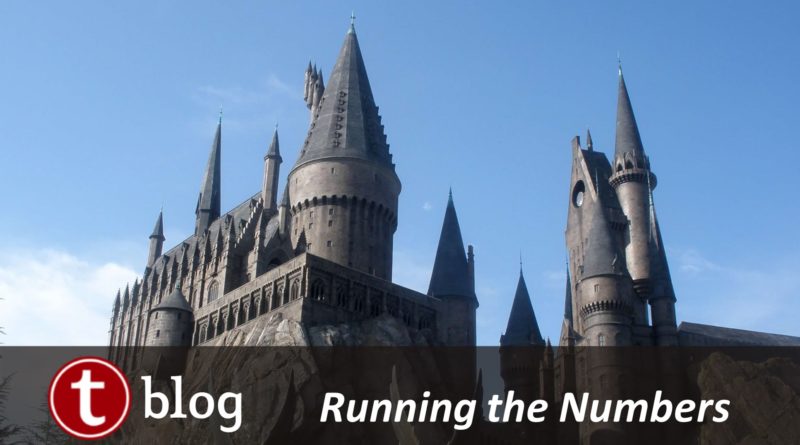 Hold the phone – Becky’s writing about Universal again. I know, it’s weird. It feels weird. But I’ve had a few people ask for a quick review of any submitted wait time data that we have from the Universal parks. A couple of weeks ago, I presented a bunch of similar data for Walt Disney World in a TouringPlans Teaches episode over on our YouTube channel. This data showed how average wait times vary between parks, showed which rides have the highest average waits, and how wait times changed throughout the day.

We receive many, many more submitted wait times from Walt Disney World than we do from Universal. So I’m not going to be able to go as in depth with this analysis. But hopefully a little taste will give you some reasons why you should help us out by timing waits during your next Universal visit!

Today we’ve got mostly easy math. The data all comes from timed actual waits using the Lines Universal Orlando app. One important thing to know up-front is that all of today’s data is filtered to standby waits. Many visitors to Universal are eligible for a Universal Unlimited Express Pass if they stay at Portofino Bay, Hard Rock Hotel or Royal Pacific Resort. (By the way, that’s a huge perk – and our lovely Travel Agents can help you secure it). Wait times today don’t include those express lanes. Only standby.

Some of the analysis here also narrows down our wait times to peak hours only (11 am – 5 pm). This helps ensure that we’re comparing times that are more like one another and not just all waits throughout the day. But, since our sample sizes are lower here, we’re not always able to make those cuts.

The average timed wait across an entire park can give us some idea of how easy or difficult any particular park will be to tour. For example, Hollywood Studios has the highest average standby wait of any WDW park, at 35.1 minutes. EPCOT, on the other hand, has an average standby wait of just 18.2 minutes. These different numbers show us why Hollywood Studios and EPCOT have different touring strategies. It’s much harder to avoid all waits at the Studios, but at EPCOT a good rope drop strategy can give you a day in the parks with no standby wait over 10 or 15 minutes.

Some interesting things to note already!

Okay, that’s a lot to digest. Let’s go over some things we can learn from this chart:

Now let’s go one level further and look at wait time patterns throughout the day for seven of these attractions. For Disney, I was able to do this on an hour-by-hour basis throughout the day. The same thing isn’t possible at Universal because of much lower sample sizes. But we can look at buckets of time throughout the day and see if we can use the results to make some touring decisions.

Many thanks go to Joe Matt for answering all of the questions this Universal newbie threw his way. If you have any questions about this data, drop them in the comments below. What other Universal data would you like to see? And remember to record your wait times in the Lines Universal Orlando app on your next trip!