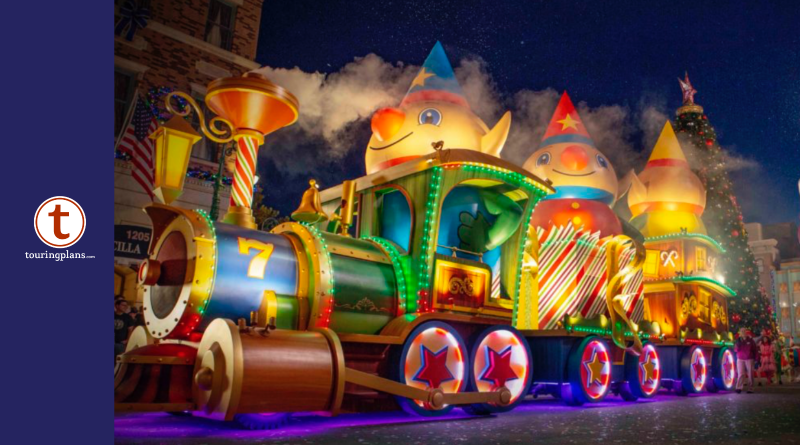 Santa’s making a list and checking it twice and we can confirm the Minions are definitely on the “naughty” list. Celebrate the holidays at Universal Orlando with parades, live shows, concerts, and fireworks starting November 16 through January 5. We love the holiday season at Universal! They offer a unique and special take on the holidays that combine familiar tradition with the new.

Christmas at Hogwarts is a time to reflect on that semester’s events before the final half of that year’s mystery is uncovered. Unwrap your Firebolt broom, put on that handmade Ms Weasley sweater, and come celebrate the holidays in The Wizarding World of Harry Potter.

Celestina Warbeck and the Banshees is one of our favorite theme park shows and we also love her Christmas-themed set. The show features original Christmas songs inspired by the Wizarding World (think My Baby Gave Me a Hippogriff for Christmas) with fun guest interactions and magical snowfall. Celestina’s Christmas show is a must-watch for all visitors and is performed several times per day next to The Hopping Pot in Diagon Alley.

After the sun sets, Hogwarts Castle magically transforms before guests’ eyes to celebrate Christmas. Held every half hour from park dusk to park close, The Magic of Christmas at Hogwarts combines projection mapping, fireworks, music, and lighting to transform the castle grounds into a winter wonderland. Music from the Yule Ball plays, presents will unwrap, and the memories from Christmas breaks in the books are relived. The show starts at dusk and runs continuously till park close. Due to the show’s popularity guests will queue in Hogsmeade prior to being let in for the next show.

Universal Studios takes all our favorite traditional Christmas traditions and brings them to life in one place. The New York and Hollywood areas are decorated with holiday lights, Macy’s balloons march down the street, characters wear holiday garb, and on select nights a concert of festive music occurs. 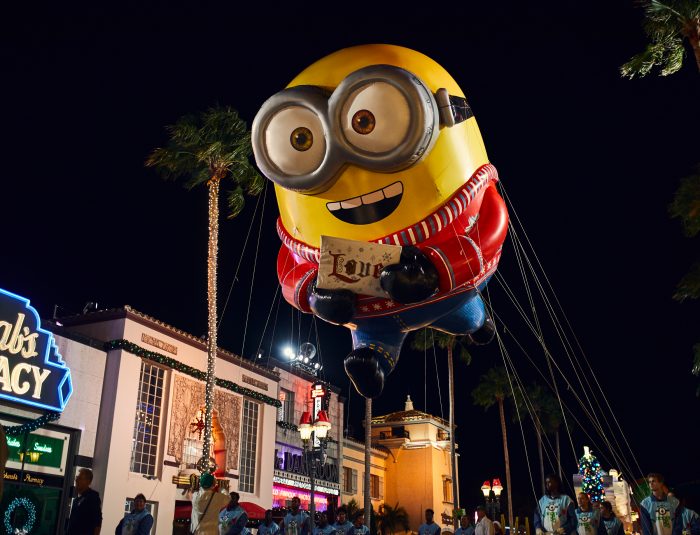 In 2017, Universal unveiled a brand-new nighttime parade for the Christmas season. Universal’s Holiday Parade featuring Macy’s brings the gigantic balloons made famous by the Macy’s Thanksgiving Day Parade to Florida with a dash of Universal spunk. Floats and balloons were specially created for the parade and star Shrek, Despicable Me, Madagascar, and Santa.

The parade starts outside of Horror Make Up and travels through Hollywood, Production Central, and New York streets. There are two ideal spots to watch the parade:

The Blues Brothers perform Christmas classics and decorate for the holidays in their own unique way. The show is a high-energy and funny musical comedy act that takes place across from Revenge of the Mummy several times per day. Arrive prior to show time on the curb outside of Finnegan’s.

In this humble author’s opinion nothing says the holidays more than a giant feast and endless quantities of sweets. Universal is here to satiate our festive hunger with two new dining experiences that include exclusive view locations for holiday entertainment.

Giant color changing trees and large garland decorate Seuss Landing, the Christmas headquarters at Islands of Adventure. Whoville residents roam the land spreading holiday cheer and interacting with guests. The Whos are friendly and offer a great photo op for guests. On select days a special The Grinch & Friends Character Breakfast is held at Circus McGurkus Cafe, where you can get up close and personal with The Mean One himself. Breakfast is $34.99 plus tax per adult and $20.99 plus tax per child, park admission is required.

A large cast of Whos (and the Grinch) bring the beloved television special How the Grinch Stole Christmas to life as a large musical production. The show features all your favorite songs, moments, and an adorable Max the dog to warm your heart. Grinchmas Who-liday Spectacular is charming, funny, well acted, and one of the best live shows in Orlando; a trip to Universal during the holidays is not complete without a viewing. The show runs several times per day, arrive half an hour prior to show time to guarantee a seat inside the theater.

Each of the Universal Orlando resorts celebrates the holidays with tree and menorah lighting ceremonies, seasonal carolers, visits from Santa, and more. On Thanksgiving, Christmas, and New Year’s Eve, each of the resorts also offers special holiday feasts for guests. For a complete listing of events, dates, and prices visit the Universal Orlando Hotel Holiday Events site.