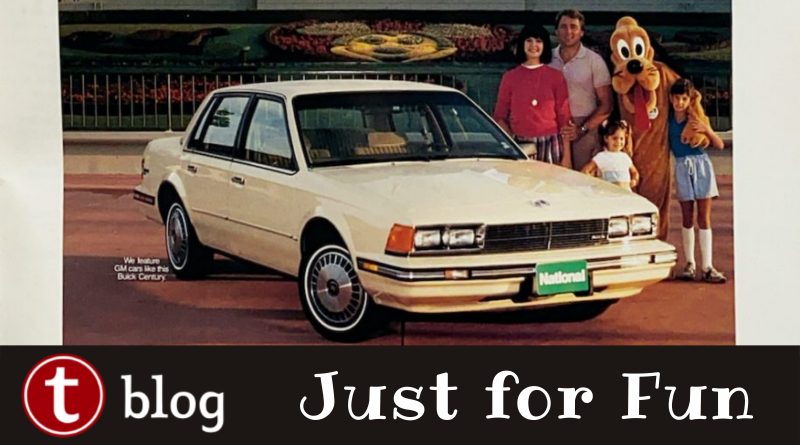 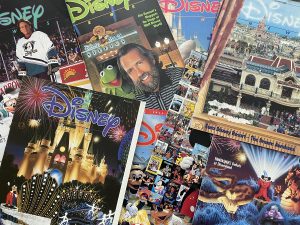 As you may have seen from my previous posts, I love the Disney News Magazine from the 80s and 90s. It was the only way to get breaking Disney theme park news and behind-the-scenes info in the pre-internet era, and there were some absolute gems in there. One of the best things about these magazine are the ads, but my favorite type of ad was very specific; boring rental cars sitting inside Disney theme parks. Today I am proud to bring you 7 of the best ones I could find, as well as a letter grade and critique for each one.

An Important Note Before I Begin

You may have heard the news that Disney is in the process of laying off 28,000 cast members in California and Florida. While this post is fun and meant as a way to help you escape reality for 5 minutes, we can not ignore what is happening to the cast members and families affected by the layoffs. Please take a look at our other post to find out ways you can help those in need.

#7: Your Grandma’s Car, but a Magical Flying Version 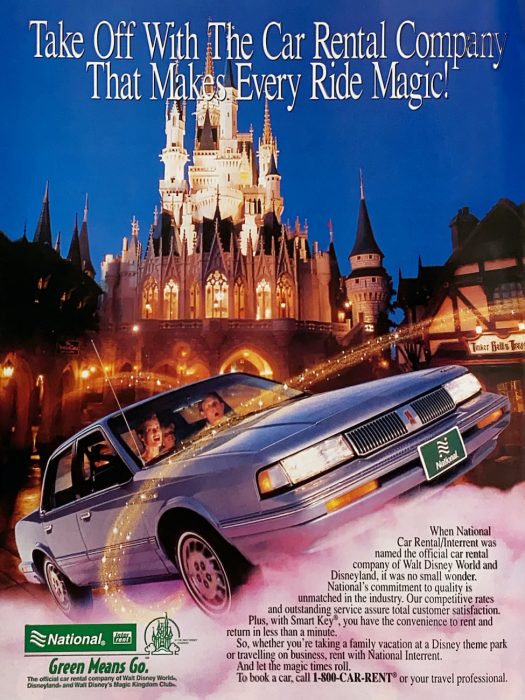 I applaud the use of special effects in this ad. The clouds on the ground and the swirl magic streak are nice touches, but personally the whole thing is a bit too busy for my taste. Seeing this car did bring me back to the days when everyone’s older relatives had huge cars like this. The kind that had incredibly springy suspension where if you would hit a bump the car would then proceed to bounce for the next 7 minutes. This ad also gets bonus points for being the only one on this list to take place at night.

#6: The Most Humdrum Car In An Iconic Location 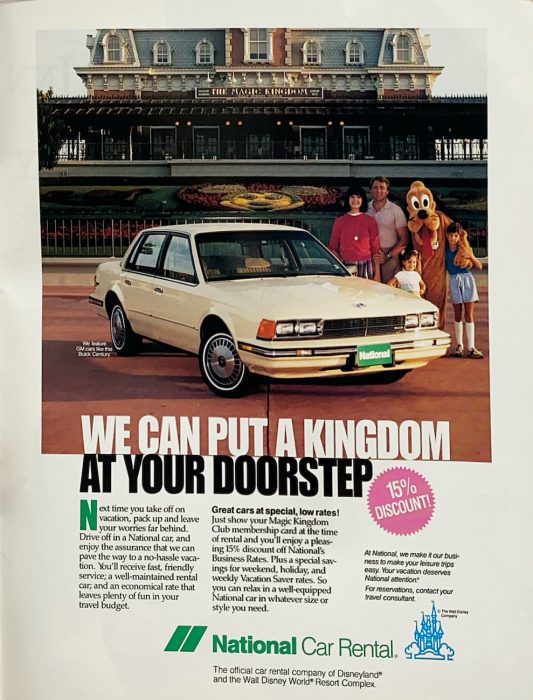 The Buick Century in this ad has to be the most boring car I’ve seen. It looks like a nondescript generic off-brand toy car you’d get out of those 25 cent capsule toy machines outside of a pharmacy. Did anyone go out and buy this car and think “Yes, this is nice and exactly what I want in a car?” HOWEVER, the blandness of the car actually works in the ads favor. You have the iconic Mickey floral and Main Street train station contrasting with the vanilla ice cream of automobiles. This ad is great for that reason, the mention of the 15% discount for Magic Kingdom Club members, and that great retro WDW castle logo in the corner. 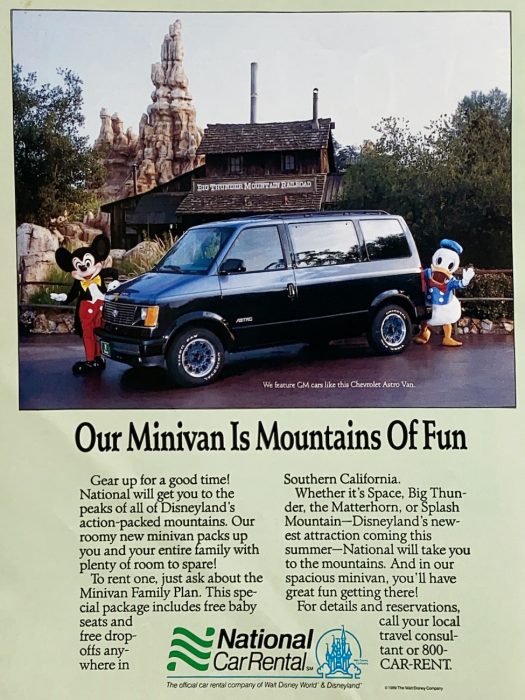 Whoever put this ad together was burdened with the gargantuan task of trying to make a minivan sound fun. I also think it’s ironic that a highly themed thrill ride was paired with the most boxy, clunky, and uninteresting vehicle one could imagine. But I have to give credit where credit is due, they really did try for this one. You can tell they tried to give it some extra ommph by adding Mickey to the photoshoot, which could not have been cheap. Overall I do like this ad because it’s unique. Most of the other ads sat the car in front of the castle and called it a day, but for this one they put it in front of a ride, which is unique.

#4: Chevy Lumina With the Best Parking Spot Ever 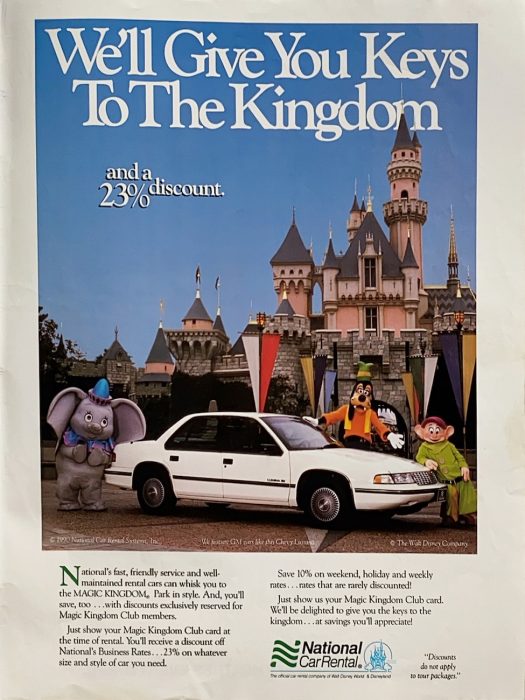 Think about the kind of pull National Car Rental had to have in order to get a picture of a car in front of Sleeping Beauty Castle. Disneyland’s castle is a nationally recognized icon and to this day is one of the most photographed subjects in the world. It’s one of those things that you have to think would never happen in today. 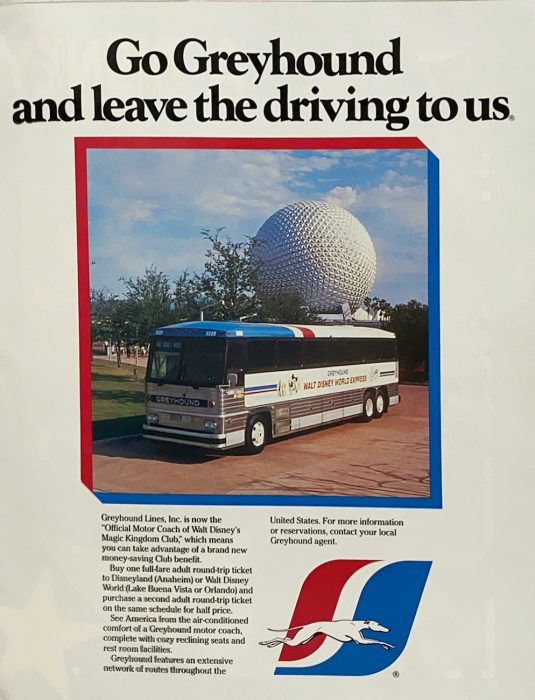 You may think it’s cheating for me to put this ad on the list since it does not include a rental car. But I will counter that with the argument that it is no doubt in the same spirit as the other ads. Plus you can not argue that it’s cool to see that vintage Walt Disney World Express logo on the side. 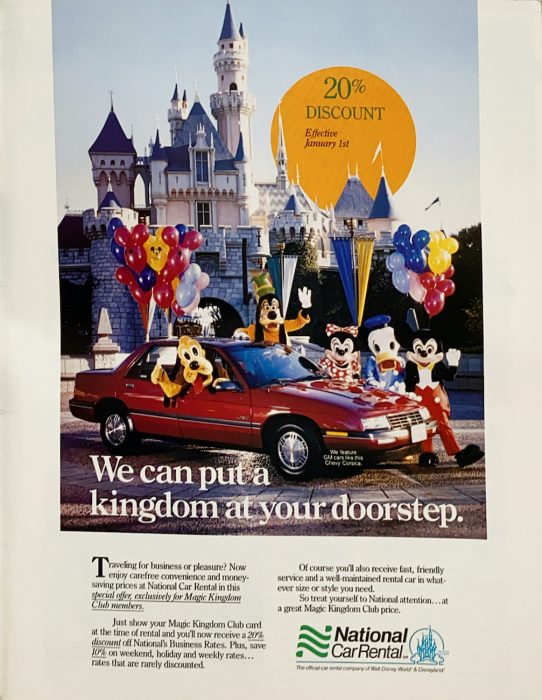 National Car Rental must have been an unstoppable goliath by the time this ad was made. Not only is the car parked in a prime spot in front of Sleeping Beauty Castle, but every member of Disney’s Fab Five is along for the photoshoot. Impressive stuff. The Mickey balloons in the back are also a nice touch. Honestly, Pluto with his head out of the window giving the thumbs up alone would have shot this ad high on the list for me, but instead it’s the cherry on top of the sundae. 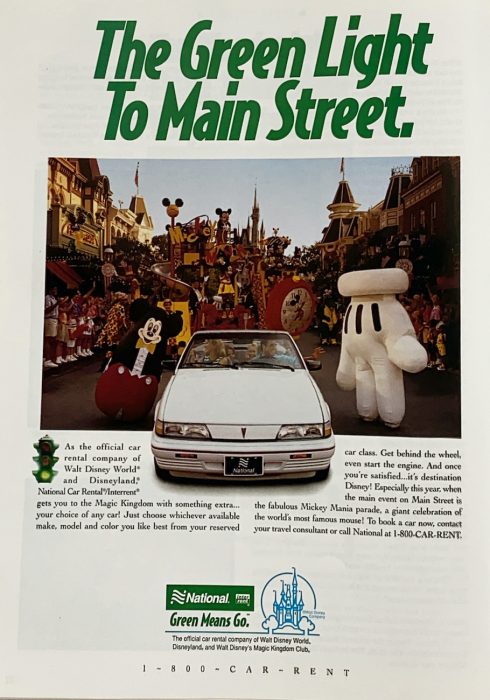 The cream of the crop when it comes to Disney News Magazine car rental ads. A rental car, driving down Main Street, curb packed with onlookers, and the hot new Mickey Mania parade in the background. Incredible. If this wasn’t proudly tattooed on the back of the CEO of National, I hope he or she at least had a framed copy of it hanging on the ceiling above their bed.

What did you think of my ranking and grades? Sound off in the comments below, I want your hot takes!