Cabana Bay Beach Resort, the newest Loews-operated on-site hotel at Universal Orlando, only opened at the end of March, but if you’ve been following our coverage – from my mega-sized photo gallery from opening day to Derek Burgan’s Saturday Six devoted to the property – you may feel like you’ve already stayed there. One aspect of Universal’s first moderately priced hotel that many readers have asked for more information about is the transportation options available to guests of Cabana Bay. As you may have heard, Cabana Bay does NOT offer water taxi service like Universal’s original 3 luxury properties. So I spent a recent sunny afternoon testing various methods of getting from the hotel to the parks (and vice versa), in order to bring you this comprehensive Cabana Bay transportation guide.

Cabana Bay doesn’t offer valet parking, but that deficit is offset by a $10 daily self-parking rate for hotel guests, which is significantly cheaper than parking at the other Universal hotels. Parking lots ring the hotel, so you can park right alongside your room. Unfortunately, high parking rates for non-guests ($8 for 5 to 30 minutes, $20 for 30 minutes to 24 hours) make it expensive for locals to drop in and knock down some pins at the Galaxy bowling alley. 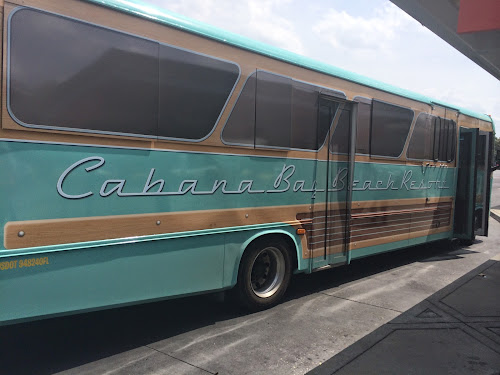 Buses pick up and drop off at Universal’s central parking hub, where the two parking garages meet. The bus stop is directly on the left as you descend the escalator from the elevated hub to ground level. 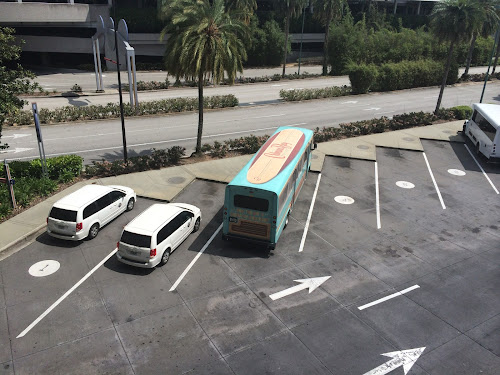 Universal invested in a fleet of buses dedicated to the resort, three of which were in circulation during my testing. I never had to wait more than a minute or two to board and depart, and bus drivers told me that they are aiming for 7 to 8 minutes between dispatches.

The bus ride itself takes approximately 5 minutes, including time spent waiting to turn at the traffic signal on Hollywood Way. The walk to the bus stop from either park’s front gate is about 6 minutes at my moderate pace. (Obviously, if you have younger or slower members in your party, your walk time will increase).

That makes the average total transit time 15 minutes (conservatively assuming a 4 minute wait for the bus, and excluding the walk to/from your hotel room). For comparison, that’s the same or shorter than the commute via Disney transportation from any WDW hotel to a theme park (excluding monorail hotels to the Magic Kingdom), sometimes by a factor of two.

As we’ve reported previously, Universal Orlando is currently in the process of building a “garden bridge” and walking path to carry pedestrians from Cabana Bay to CityWalk and the theme parks. Once complete, the path will cross Adventure Way near the northeast corner of the property, and follow the southern side of Hollywood Way until joining up with the existing Royal Pacific walking path.

The new path will not be complete until at least mid-June. In the meantime, guests can walk from the northwest corner of Cabana Bay (near where the Starlight and Thunderbird buildings meet) and walk along the north side of Hollywood Way to CityWalk, entering near Margaritaville.

The walk from Cabana Bay’s northwest gate to CityWalk’s Margaritaville entrance took me 13 minutes. From there, it is only 90 seconds to the entrance of Islands of Adventure, or 4 minutes to Universal Studios Florida. Keep in mind that these numbers do not include the walk time from the Cabana Bay gate to your room, which will be substantial if staying in the southern half of the resort (opening in June).

Finally, here is a video I took of the route during the hotel’s opening week:

You’ll note that Orlando drivers are not particularly accommodating to pedestrians, even when they have the traffic signal, so use caution if walking with children or after dark until the overpass bridge is completed.