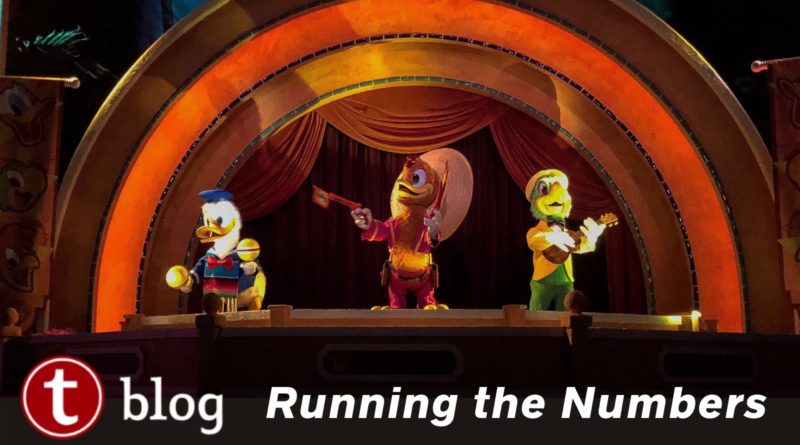 At the urging of my small child, I once rode Gran Fiesta Tour about 12 times in a row.  It was the middle of August, the Mexico Pavilion was air-conditioned, the line was about 2 minutes each time, and since my goal was to keep this child entertained while the rest of the family rode Test Track — well, why not? This ride rarely has a long wait and has always struck me as a sleepy little ride that isn’t near the top of anyone’s list, but the great thing about data is that it tells us what people actually do instead of what we think they do. It turns out that almost 40% of returning EPCOT visitors ride the Gran Fiesta Tour; I never would have guessed! Let’s take a look at which EPCOT attractions bring guests back visit after visit.

How I Got The Numbers

You can find a complete rundown, including a discussion of the limits and systematic errors of the analysis, in the first article in this series. If you’re in a hurry, or if math just isn’t your thing, here’s the Cliff’s Notes version. 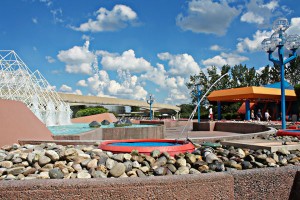 I divided our entire set of survey data into two pools based on the respondent’s answer about how many times they had been to Disney World.  Guests who indicated it was their first trip were in the “First-Timer” pool, and guests who had at least one previous trip were “Veterans”.  Within each pool, I calculated the percentage of visitors that actually experienced the attraction out of those who could have done so.

Attractions were eligible for this analysis if they are not permanently closed and have been open for at least two years. That’s why you might notice some missing old favorites like Agent P’s World Showcase Adventure, or some missing new attractions like EPCOT Forever.

Last but not least: a reminder.  Any speculation on why these results are as they are is based solely on my experience as a Disney World visitor and someone who talks to other Disney World fans, and nothing more.  It’s included for fun, and because it would be a pretty boring article if I just published the numbers.  Please don’t spout it to your friends as arcane Disney factoids, because that would just be wrong.

I was not at all surprised to see Soarin’ in the top spot, with 66% of returning visitors and 59% of first-timers. My marathon session on the Gran Fiesta Tour aside, there aren’t that many rides that I could redo 3 or 4 times in each park visit without getting tired of them, but Soarin’ just has that special something.

Spaceship Earth coasts into 2nd place with 59 / 53% (re-rider numbers will always appear first), followed by Test Track with 53 / 47%.  Spaceship Earth is an icon of the park — quite literally! — but cynical me has to wonder if Test Track’s overall numbers wouldn’t be higher if it didn’t break down more than any other ride in Disney World.  Rise of the Resistance might be looking to challenge it for the top spot, but I’m not sure that Rise will still be so unreliable when it gets to its third decade of operation.

Frozen Ever After sits in the 4th spot with re-riders and first-timers in a dead heat at 51 / 50%.  I suspect this ride might pick up a higher percentage of returning visitors if it didn’t have one of the lowest hourly capacities of any attraction in Epcot.

Living With the Land closes out the top five with 48.3 / 41.0% — or does it? The two sides of Mission Space are calculated separately; when you add them together you get 48.3 / 51% overall.  That looks like a tie on the veterans’ side and a clear blowout on the first-visit side, but the problem is that straight-up adding the scores isn’t really legit.  Lots of families rate both sides, either because everyone rode both or because some people were too chicken to go Orange (your humble author raises her hand), and those surveys will get counted twice. The right approach really is to treat them like separate rides.  Plus, this is an article about what we choose to repeat, and on that basis Living With the Land clearly takes the 5th place spot.

We can see above that Mexico is the only World Showcase Pavilion with more than a quarter of returning guests.  When I looked at the Pavilions as a group I was curious if there was any pattern based on their location, so I put them on a map instead of in a chart.

I don’t see anything.  Do you see anything?  Let me know in the comments.  Interestingly, Mexico’s re-visit percentage stands out, but its first-time visitor percentage is pretty normal.  It’s still in first place, probably because yeah, big honking pyramid right as you enter from Future World, but it’s not leaving everything else in the dust like that 27% number is.  I think Fred speaks for all of us when he says: “Air conditioning and tequila. Hard to beat.”

At the risk of y’all thinking I’m just flat out obsessed with Gran Fiesta, I thought this pair was so fascinating.  It’s a real illustration that more goes into a ride’s repeatability than how exciting it is.  On a first trip to the World with an Arendelle-obsessed child in tow, the Royal Summerhaus may be in a prime spot on your to-do list. Despite the solid rating, the 40+ minute wait might make this a hard sell when that same child’s obsession has faded a few years later.

By contrast, first-time visitors might see the short queue tucked away in the corner of the Mexico Pavilion and think as I did — a sleepy little ride, hardly anyone is interested. Something worth your time would have a longer line, right? Yet veterans know what’s behind that 3.5 rating: a lazy Disney boat ride with audio-animatronics, reminiscent of the Small World ride in Magic Kingdom.  It’s charming, it’s classic, and it’s a good return on a short wait.  When popularity comes from people who are returning again and again, it might be showing you that something is worth a second look.

What’s your record for a re-ride marathon?  Why do you think the American Pavilion came in dead last? Let us know in the comments!

5 thoughts on “Veterans vs. First-Timers: Which EPCOT Attractions Do We Come Back To?”